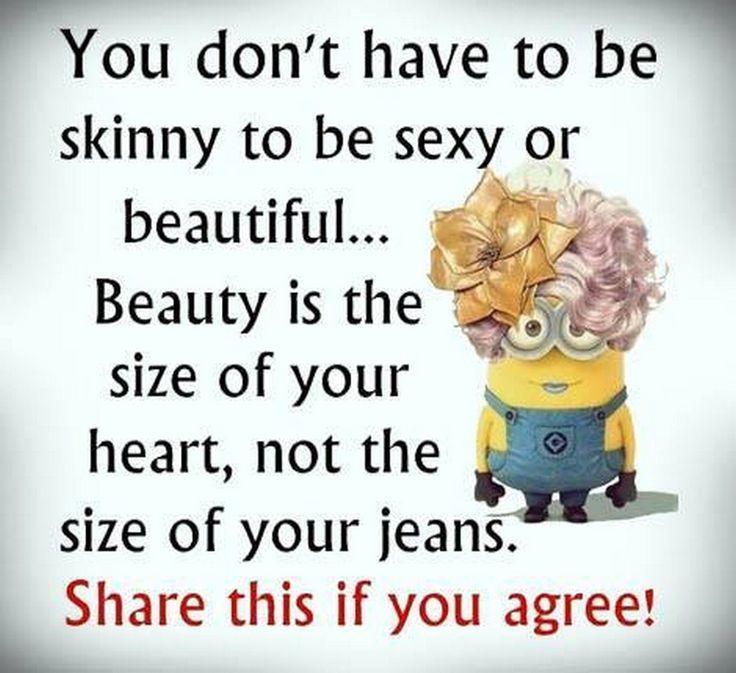 Over on my FB profile my buddy egged me into being social and do this stupid 'challenge'. In the end it was pretty fun.

Since here there may be another 3 people who will actually read my words I figured I might as well copy/paste my entries here too.

I'd actually like to extend this challenge to you guys! Pat Bateman, Soulbow, Amna, Occams, NinjaSppd, PhilKen, Adzuken, the rest of you guys who interact with me (or don't), what you got!

Every day I post an image from a video game that has impacted me and nominate somebody else to take the challenge.

Day 1: Legend of Zelda - Breath of the Wild 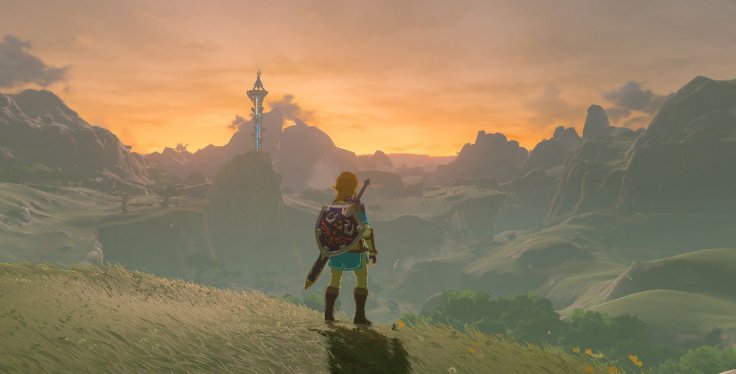 I could fill each day with a different Zelda game. Easily my favorite series. But I'll go with my favorite one and my favorite game ever. BotW distills what I love most about the series. Exploration.

Like irl, I like exploring places, so BotW panders to one of my primal instincts. I could, and have, spend hundreds of hours exploring every nook of Hyrule. It's good fun and quite relaxing. The art style is absolutely gorgeous too and the minimalist soundtrack really lets the feeling of nature stand out. Great stuff. I enjoy it. 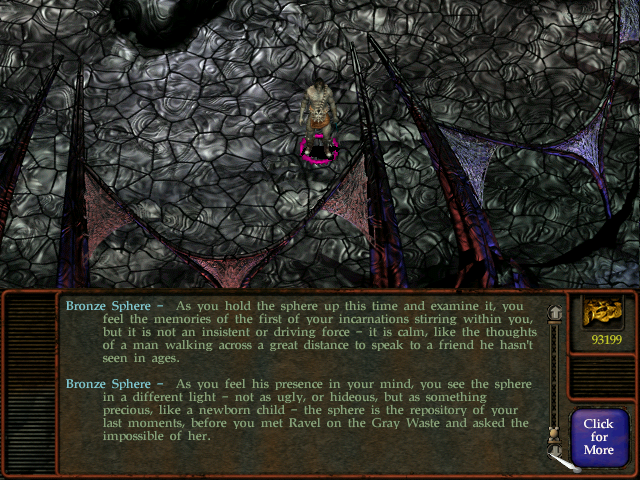 I've always been a bookworm and I like games with a great story. But up until Planescape the two never really merged. Video game writing was not nearly engrossing as a good book and books could never be as interactive as a game. Chris Avallone's writing on Planescape is of legend.

Taking the rpg troupe of the amnesiac hero and crafting a journey exploring what it means to 'be' I was completely sucked into this weird multiverse where everything and anything is possible. And with so many paths to choose the adventure is made to have a wholly different experience each time. It's one of those games that I really should replay soon as now I'm nearly 20 years older I will definitely interpret it differently like I did last time I replayed it about 6 years ago. Great writing gets better with age.

Here's one of my favorite excerpts from the game:

"The sphere wrinkles in your hands, the skin of the sphere peeling away into tears and turning into a rain of bronze that encircles you. Each droplet, each fragment that enters you, you feel a new memory stirring, a lost love, a forgotten pain, an ache of loss - and with it, comes the great pressure of regret, regret of careless actions, the regret of suffering, regret of war, regret of death, and you feel your mind begin buckling from the pressure - so MUCH, all at once, so much damage done to others... so much so an entire FORTRESS may be built from such pain. And suddenly, through the torrent of regrets, you feel the first incarnation again. His hand, invisible and weightless, is upon your shoulder, steadying you. He doesn't speak, but with his touch, you suddenly remember your name... and it is such a simple thing, not at all what you thought it might be, and you feel yourself suddenly comforted. In knowing your name, your true name, you know that you have gained back perhaps the most important part of yourself. In knowing your name, you know yourself, and you know, now, there is very little you cannot do." 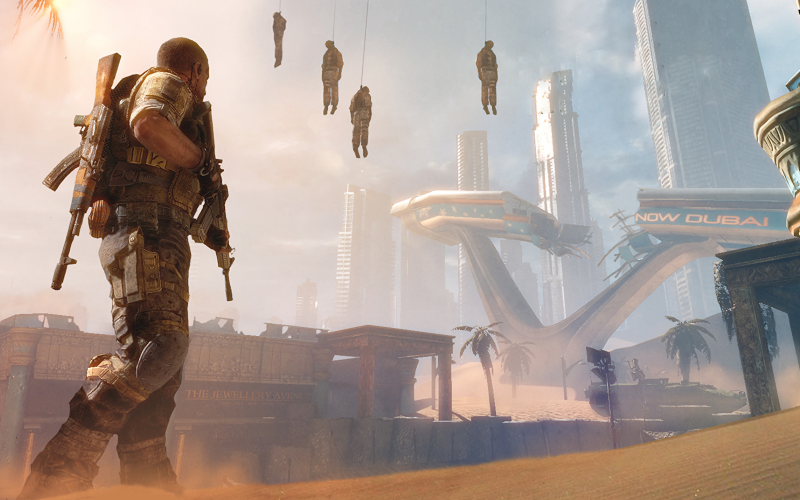 On the surface Spec Ops is a janky, mid budget, shooter about American soldiers fighting to liberate a Dubai taken over by a dictator (snooze, boring). However, Spec Ops is one of the most harrowing psychological horror experiences I've ever witnessed.

To speak more about the particulars would be going into spoiler territory but I can say their use of game mechanics, and subtlety and nuance in both the visuals and narrative is unparalleled. This is an amazing example of a group of talented developers using the limited budget/tools to make something truly unforgettable. Play it! 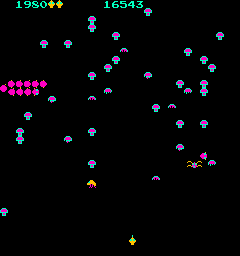 Sometime in the early 80s in that arcade that used to be next to Gee Gee's on the boardwalk in Manasquan, NJ, a young boy played his first video game. It's been downhill since then.

Take the gameplay of the 3D Legend of Zelda games and slap a gorgeous Sumi-e in motion art style on it and fill it to the brim with Japanese folklore and you've got Òkami. I've played through this game so many times and on multiple platforms (Switch version is by far the best) and never tire of it. It's loaded with joy and happiness; every time I play it a smile comes to my face. It's just brimming with beauty.

One of my favorite bits is a rather pointless mechanic where you can feed the other animals. A scene of Ameterasu (the Japanese sun god in wolf form, who you play as) sitting with the animal while they eat and the camera circles while mellow music plays. Idk why, but it's just so relaxing. Definitely get yourself a copy of this game if you've never played it. 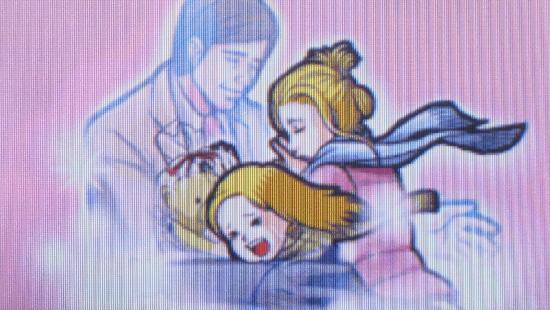 Every couple has a 'song'. My wife and I's is "You're the Inspiration" by Chicago. Besides the lyrics meaning a lot to us, the reason is because of a rhythm game on Nintendo DS called Elite Beat Agents.

In the game you play as 3 male cheerleaders in suits who travel around helping people through the power of dance and music. It's ridiculous, wacky, and tons of fun. For the most part the scenarios are very lighthearted, but for "You're the Inspiration", oh boy! What a tonal shift! The story is about a family where the father has passed away and the only thing his young daughter wants is to spend Christmas with her father. Cue the waterworks.

As the Elite Beat Agents you need to dance to help her father's spirit get home to be with his family. Failure here isn't an option. Between the cheesy love song, dramatic and bittersweet story, and silly dancing we found it all just too hilarious and couldn't stop laughing and having the song stuck in our heads. We were already madly in love but having a partner who appreciated the ludicrousness of this game and scene absolutely confirmed I had made the best decision of my life! Love you Ale!

Day 7: I Have No Mouth and I Must Scream 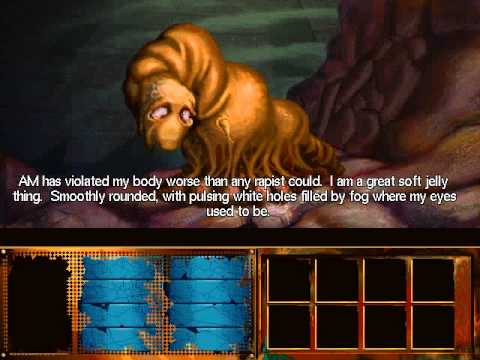 It was a toss up between choosing IHNMAIMS and Harvester. Both are the most fucked up games I've ever played. But IHNMAIMS edges out because it is full on bleak, depressing, disturbing, and insanely well written. Harvester is just shlock horror comedy in the end.

I enjoy pulp horror flicks and books and don't mind crippling bleakness in small doses. It doesn't really phase me. But there were some scenes in this twisted point and click adventure that literally made me sick to my stomach. To this day no other game has achieved that. Dealing with rape, sloth, vanity, nazi medical science, and other happy topics, this is not a game for the easily affected.

Based on the short story of the same name by Harlen Ellison (who also lends his voice to the game) IHNMAIMS tells the story of an A.I. named A.M. who wipes out humanity and then keeps a copy of the consciousnesses of a group of horrible humans to relentlessly torture for eternity. You play as the humans and your goal is to outsmart A.M. and find a way to die and escape eternal torment. Really uplifting stuff. :) 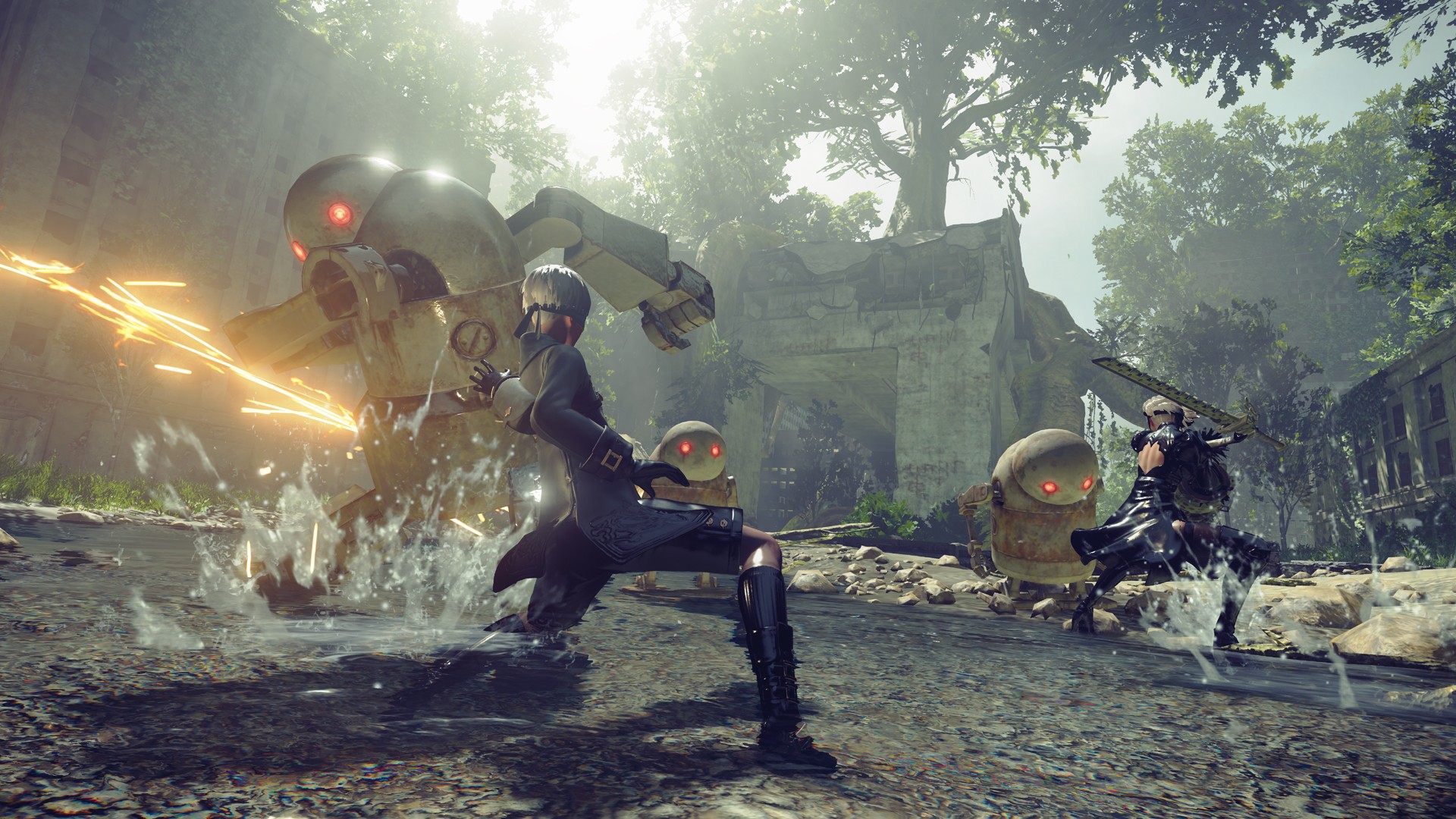 If you have yet to play this genre twisting action game, stop reading and play it. If you have already played it you know exactly what I'm going to write below. If you have no intention of following my glowing reccomendation and playing this game, read on but be warned. Hopefully I've typed enough so the spoiler doesn't automatically pop up in people's newsfeed.

Seriously, this spoiler will ruin one of the greatest gaming experiences ever made!

So to truly beat this game you have to play through it 3 times. Each time from the perspective of a different android in a twisting tale about humanity and religion and We Will Become As Gods!!! By the time you reach the third ending and kinda figure out what the heck is going on you're tossed into the ending credits which turns into an insanely difficult bullet hell shm'up. Each time you crash in the credits words of encouragement float around the screen and eventually other ships jump in to help make it through. And then you beat it and you feel so good with that great video game rush. And theeennn...

The game asks you to donate your save file. By doing so you can leave some encouraging words and your ship for another random player you don't know and will never meet to help them beat the game. And then, you're save file is actually deleted. No going back to do side quests. No new game + run. No souvenir of the good chunk of the time you invested in the game. Gone! Want to play the game again, you gotta start again from scratch.

If you're not a gamer, you might not get the attachment to a save file. And even if you are you may not realize it until you're asked to delete it. It wasn't an easy decision and the game asks if you're sure many many times before it executes your save. But, man, what a great feeling it gave! Not only did I help another player but so many other people made the sacrifice to help me and others out. It absolutely turns the narrative theme of nihilism and despair on its head and ends with the message that humanity is genuinely good and there is hope for us all.

No other game has emotionally impacted me like this and it shows the real unique power of games as works of art and storytelling mediums. An absolute masterpiece! 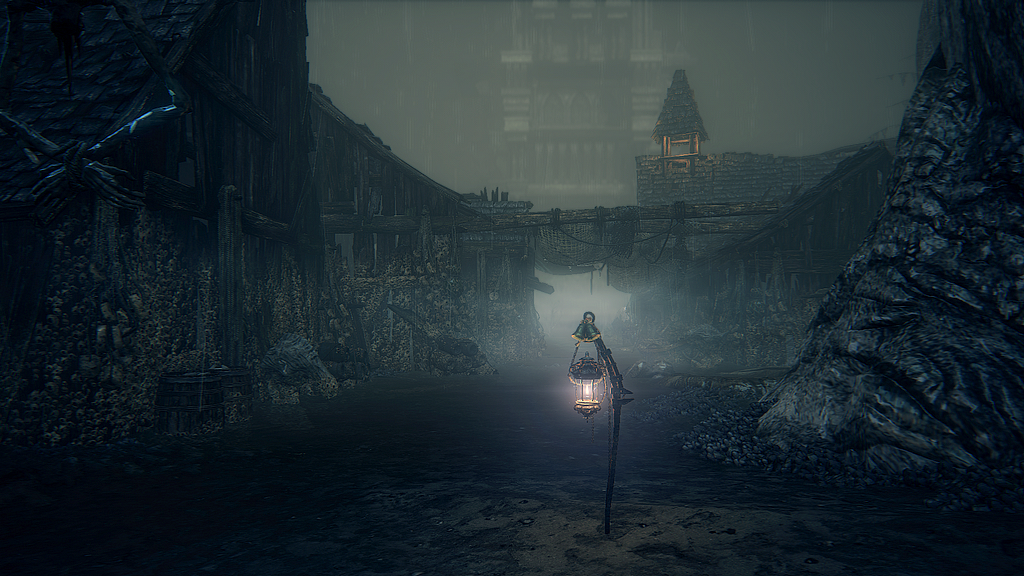 I wanted to include a Souls game on this list because of how they redefined so much in so many aspects of what I now want from a game. But what takes the cake for me is the 'spinoff' game, Bloodborne. More visceral action and one of the only games to really get the works of H.P. Lovecraft, who is one of my favorite writers, and translate it so well to video game form.

In particular there is one area in the game's DLC, The Old Hunters, that filled me with unbridled nerd joy. The Fishing Hamlet is right out of "The Shadow over Innsmouth" and if you look close enough you can even find The Sunken City. The Old Gods are strong with this one.

The level itself is filled with unspeakable, unsettling, unpleasant, inhuman, abhorrent, abominations of twisted flesh and fish and the boss fight with The Orphan of Kos is my pick for the most satisfying and intense boss fight in a series well known for amazing boss battles. 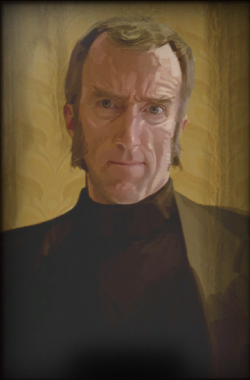 I will never look at lemons the same again.

The 3 of you who actually read my entries, thank you! I hope you were entertained. I could easily add another 10 to this list, but I'm lazy. I tried to keep the games more modern as I hope you might go check some of these games out. Peace!