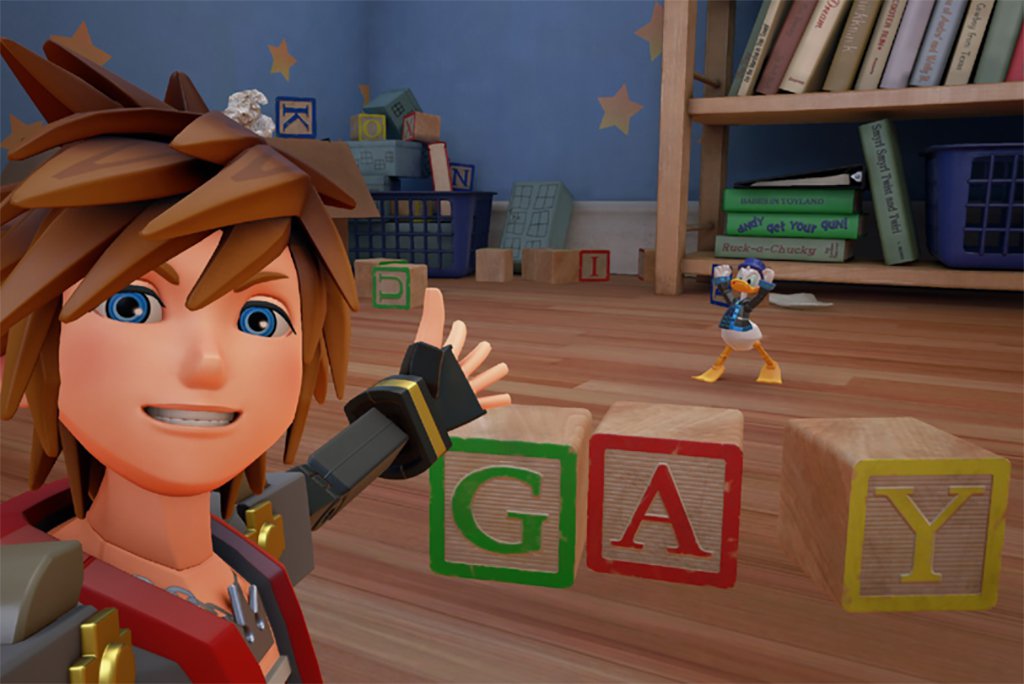 The gaming landscape has changed a lot since the last major Kingdom Hearts game (2.8 doesn’t count in my book). With more beloved franchises being reduced to shallow grindfests made not for people to enjoy and lose themselves in, but to extract as much cash as possible, KH3 feels like something that shouldn’t exist in this timeline. I feel like it came from some alternate dimension where the major game industry charted a different course, with no lootboxes or any microtransactions to be found.

I’ve already mentioned this in another C-Blog a while back, but here’s a list of events that’ve occured in my life in the roughly 13 years since I got Kingdom Hearts II.

-I joined the furry fandom.

-Moved to a whole other state.

-Added Ratchet & Clank Future: A Crack in Time, Undertale and Mother 3 to my list of all-time favorite games.

-Briefly wrote for another gaming website for a couple years.

-Attended my first convention, which was something I wanted to do for years.

-Pivoted hard from playing games primarily on console to PC.

-Got my first car, drove it ‘till it broke down before getting my next car.

-Lost my grandma and the dogs my family’s had since I was little all in the span of about a year.

-Got a tech certification and bounced around a couple IT jobs.

-Witnessed one of my favorite Nintendo franchises rise back to prominence for the first time in a decade, only to watch it crash and burn because of Nintendo.

-Made several friends across all of this who I still think of fondly, even if I'm terrible at keeping in touch.

I can probably think of more stuff that's happened, but I don't wanna waste any more time. So let's get right into the C-Blogs you all wrote this week!

* - Strider shares a tale from a D&D session he DMs for. It starts right as the party was stood in front of a young dragon.

* - Gamer Fatigue can be a very real problem to deal with. I deal with that all the time with games I love. ShadowKai talks about this issue as someone who is a gaming completionist.

S - I’m sure several of us in the community have a bunch of unfinished blog drafts lying around somewhere. Dango hit on the clever idea of using a whole bunch of them to talk about the stuff he’s been playing and watching, including the lows, highs and everything in between.

A - Konami is Konami and Konami is the worst, especially with their treatment of the massive, praiseworthy library of its games. Flegma gives us a review of a book detailing Konami’s history with the MSX. It’s called Konami’s MSX History: The Unofficial Story.

A - PhilsPhindings talks about the inspirations for one of gaming’s most icon tunes, the World 1-2 theme from Super Mario Bros.

A - He also dives into the first Sonic the Hedgehog game’s OST and analyzes Labyrinth Zone, another fairly iconic tune.

B - Birthdays! Everybody has one! Why not share the fated day you escaped your mother’s womb with us?

C - A new month, a new Band of Bloggers theme! This month’s theme, much like my sex life, is “Short but Sweet”.

T - I think it’s safe to say most of us here on DTOID love 3D Zelda games. But which 3D Zelda is the most 3D Zelda? Boxman214 ranks them all in a handy list.

T - ThisIsMyBoomstick also has a list of his favorite games from the past year.

R - GreatTrickyShitGreat went through the Resident Evil 2 remake. He’s got thoughts on it!

R - Lord Spencer continues his Saturn Reviews Report with ten more games. This time he goes from Last Bronx at #70 to Virtua Cop at #61.

T - For LaTerry’s January Band of Bloggers entry, LaTerry looks back on his time playing through the Spidered-Man game for the PS4.

T - Shoggoth2588 tells us what games he’s been playing throughout the month of January.

D - Osc has his first update of the year for his game project.

C - The videogame dramaturg asks for people to download their team’s game and answer the questionnaire for their research project. Probably could’ve made this a Q-Post instead.

C - Free Story DLC advertises a stream they’re doing for charity. A noble endeavor for sure, but the C-Blog probably could’ve been fleshed out a bit more.

C - Calvinbrine promotes a game he made by himself, though it could’ve used a bit of formatting and a couple screenshots/videos to show it off a bit. Also, I misread the title of his game as Boyshot Zero.

Interested in helping us with the C-Blog recaps? Let us know in the comments! We really could use all the help we can get.