A Look at a Book: Konami's MSX Legacy - The Unofficial Story

In January 2019, I ordered a hardcopy of Konami's MSX Legacy - The Unofficial Story by Wim Dewijngaert. This isn't, as far as I can tell, a crowdfunded book project but more or less the work of one person on their own time with help from others.

A heads-up: as egotistical as you might find it, most of the links on the old MSX games in this blog are to my own earlier blogs on the said games. 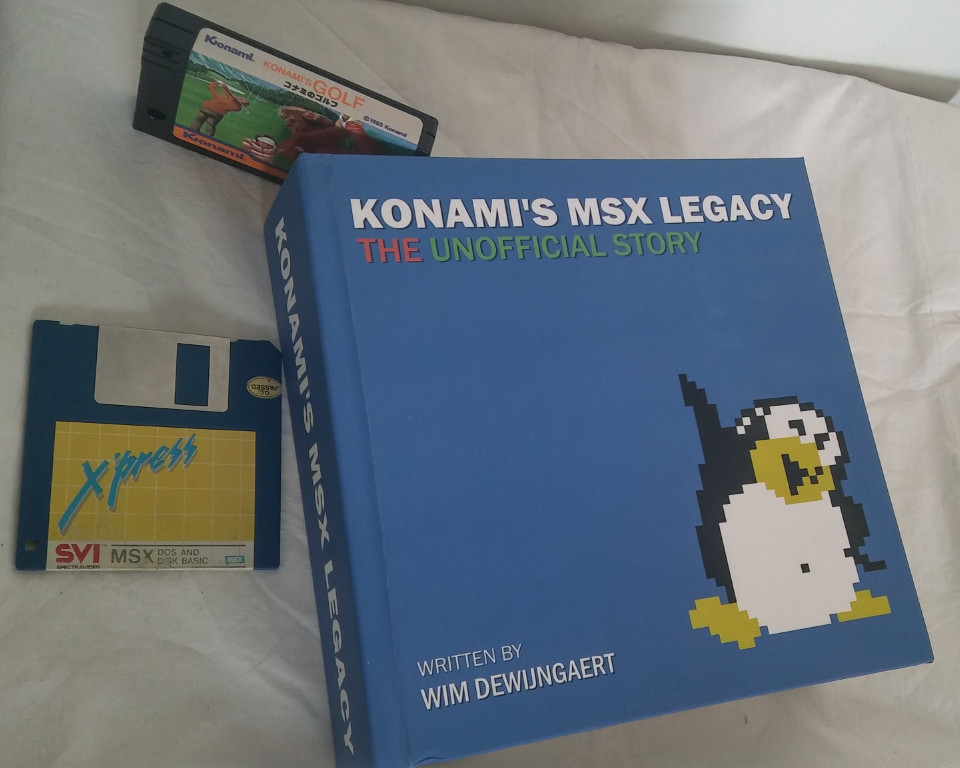 The book cover, with a Konami cartridge and a 3.5" diskette added for scale; neither are included with the book. If you don't know how big either of those two objects are, you probably aren't the intended audience.

At first glance, there are some problems with the physical product. One, the book I ordered from Amazon was alone in the cardboard box. No plastic wrap of any type. Two, while the book has hard covers, it is not a bound book. Instead, the pages are glued as in a paperback. So, imagine a paperback book but with the outermost pages glued to hard covers.

I would imagine this is in part because the book has 840 colour pages (not glossy paper) and it is a print-on-demand book rather than having a fixed printing size. By comparison, the thicker of my other two coffee table books on video games (The Art of Point and Click Adventure Games, 2018) has about 480 pages.

The book goes through every MSX release Konami made in the order of their serial codes, even the Japanese-only ones. This is not just a book of screenshots, but text-form information is given as well, such as enemy and powerup descriptions, game walkthroughs, gameplay descriptions, cheats, secrets and comparisons to arcade originals in some cases. There are no interviews, though, of anyone. 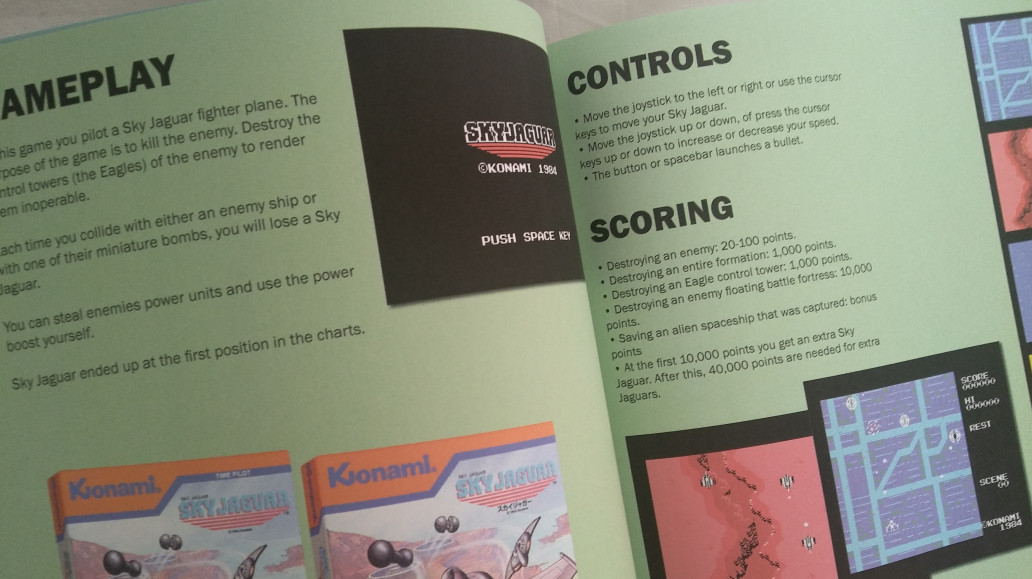 Sky Jaguar is one of the games with less information given in the book. But even then, the book says there was no arcade game by that name, but it is similar to Mega Zone.; something I didn't know when I wrote my blog on the game.

In some places, there are also small trivia boxes such as how the English version of Metal Gear (Konami, 1987) on MSX has a bit over half of the radio calls the Japanese version had. (The same box also tells the version on Metal Gear Solid 3: Subsistence (Kojima Productions/Konami, 2005) has all the radio calls.) A fair bit of this focuses specifically on trivia rather than "bigger things" -- the book mentions how Dr Venom from Nemesis 2 (Konami, 1987) appears in a poster in Contra Rebirth (Konami, 2009) on Wii, but doesn't mention how Gradius Rebirth (Konami, 2008) on Wii is effectively a prequel to Nemesis 2.

The more complex games are covered in greater detail than the rest. Say, Knightmare 2: The Maze of Galious (Konami, 1987) could be described as a 2D Metroidvania and it takes 34 pages with all the maps. Metal Gear, 32 pages. Monkey Academy (Konami, 1984), 3 pages. Super Cobra (Konami, 1983), 3 pages. Admittedly, it's far more useful to have maps of Metal Gear and Maze of Galious than Monkey Academy and Super Cobra. But displaying full maps of Nemesis (Konami, 1986) levels to show the exits to the bonus stages is maybe a bit overkill. Just as a reminder, Nemesis is Gradius and a horizontal shoot'em-up. 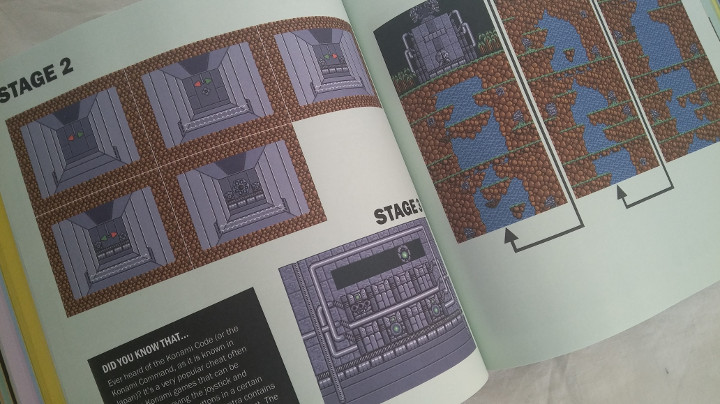 The book also tells the various ways games can use different ROM cartridges together for "peculiar" effects, as some MSX systems had multiple ROM cartridge slots. Say, playing Nemesis 2 (a Gradius offshoot/sequel) with Penguin Adventure (Konami, 1986) in another slot would replace the player's spacefighter with Penta, a penguin.

Of particular note: while some are straight-off cheats and Konami even had "cartridges with cheats" for their own games, some take a step to the evil side: you cannot get the true ending in Salamander (Life Force on NES) (Konami, 1987) unless you have Nemesis 2 in another cartridge slot.

There are frequent references to the homebrew/hobbyist scene. The book mentions various remakes, patches that add smooth scrolling on better hardware and such, English translations for Japanese-only games and things found out by examining the source code, such as the Vampire Killer's (Konami, 1986) stats display at the top hiding away part of the level design. The end of the book even has a section for fan ports of Konami's arcade games like Mikie.

There are also single pages covering a single shared trait, such as the font used in the games, the Moai heads or in which games Penta the penguin appeared in. The end of the book also goes through various music compilations with MSX music on them.

In the end, my main concerns are about the book's physical quality compared to its price. 840 full-colour pages can't come cheap, but I can't help but feel a few too many corners were cut with the physical production to keep the price half-reasonable (over £40 + S&H on Amazon UK) . A quick readthrough revealed a few mistakes (say, Super Cobra missing from the list of games that didn't use the same font as the vast majority of Konami's MSX1 games) and in the case of Salamander's level maps, a visual glitch. A bigger lapse could be considered not marking where all the hidden weapons in Nemesis 3 (Konami, 1988) are in the maps.

I doubt I'll regret buying the book as I'll use it as an additional reference for my later Konami MSX game blogs, but at the same time, I'll probably keep it stuffed away so that it stays intact.

... I mentioned the company name 21 times on this page. That's... repetition.

I bought the book with my own money and the opinions in this blog are my own.

EDIT 29.1.2019: Clarified the point on Nemesis 3 maps: many hidden weapons' locations are given, but not all of them.

ADDENDUM/DISCLAIMER 30.1.2019: I doubt I have played even a fifth of all the games covered in the book. Please do not take me for an expert on Konami's MSX games. As such, I am not a reliable reviewer of the majority of information given in the book.