It's A Secret To Everybody #6: Rawket Lawnchair 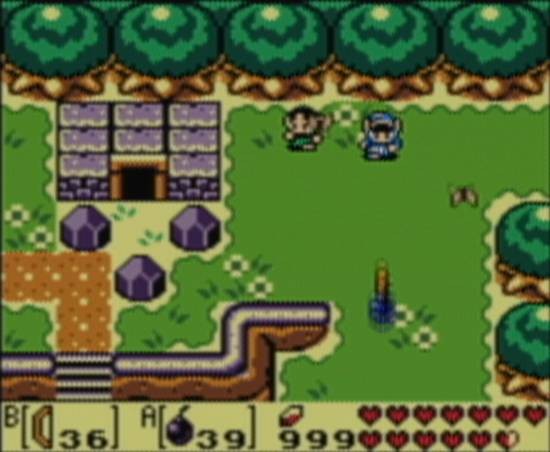 How awesome is this secret?

Ka-BOOM! Now you can launch bombs across the screen, and they explode on impact. Perfect for the hero on the go who has no time to mess with such foppery as "fuses." Excellent for the green thumb in your life looking for a better way to take care of weeds and maintain their garden. It also makes julienne fries.

Seriously, Link just built an RPG launcher. It'd be easier to describe how not awesome that is. This turns timed bombs that take a little finesse to use in some situations into ranged death that takes no prisoners. This is an effective way to clear a crowded room of enemies. It's magnificent against those bad guys whose main weakness is bombs (save for the dodongo-esque creatures that need to be fed bombs to be defeated) such as Pols Voice.

One of the favorite room puzzles in A Link To The Past and Link's Awakening is a chasm or wall separating Link from a group of bomb-allergic enemies that must be defeated to open the exit door. The usual method is to lay a bomb down, pick it up, then throw over the wall/chasm with excellent timing so that the wandering enemies walk into the explosion. This little secret provides a much easier answer.

One of the things I liked about this secret when I first found out about it was a certain ambiguity. That is to say, it's difficult to determine from a player's perspective whether this is a glitch in the way the game handles weapons (which would make it the first glitch I've featured here,) or if it is an intended hidden feature put in by the designers. Nothing at all in the game requires you to do this. On the other hand, this trick made it into the Game Boy Color remake of the original game (obviously) while an infamous glitch (the map screen scrolling trick) was removed. One more bit of evidence that it was intentional is that bomb arrows returned in Twilight Princess, not as separate ammunition but by combining the bombs with the bow (this time as a documented technique, however.) It's possible that it started as an unintended glitch that the designers liked, and became a feature.

Whatever the case, take this knowledge I have bestowed upon you, and use it well.


By that, of course, I mean go harass the shit out of chickens.

Previous Cases
#Community
Login to vote this up!