Darktoid: While we're on the subject of opening up 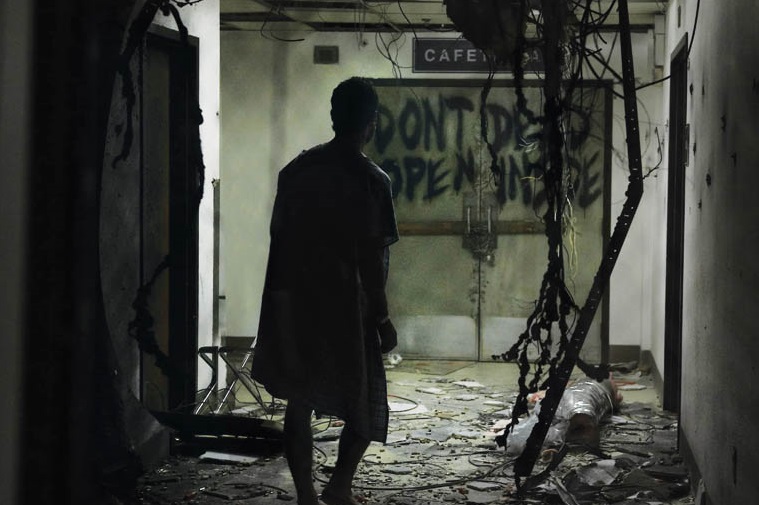 I don't wanna feel like I'm taking any thunder away from Ninja. He might pull out a shuriken, slice all my clothes off, and embarass me in front of that girl I like from home room!

But, in all the bluntest of honesty, I have issues that I'm in the process of tackling with professionals that keep me from living a normal life, that keep me from taking my medicine like I need to, that make me lash out when I really don't mean to, and, yes, that keep me from being around you all and making sure this place remembers me forever. Because, if not Destructoid, what else do I have to my name? I mean, yes, my music, my LP's, and so on. But, this place feels like my second home and I'm more accepted here than I am anywhere else.

In my prime, I had more than a few folks say that I was an honest to goodness inspiration for them. That I was amongst their favorite users. Not my words, those guys you know said them. Probably Phil. Maybe Nekro?

But, yeuh. I feel like opening up a little (or a lot) myself.

You see, I'm, apparently, a strong contender for high end OCD (according to my current psychiatrist and my own flubbing brain). My compulsive habits are obscenely obtrusive and it's likely very hard for someone without OCD to truly understand that it's more than knocking three times then jiggling the knob.

With OCD comes the usual. The habits, the intrusive thoughts, and, what hurts worst, the looping thoughts. The looping thoughts, believe it or not, are 25 times worse than any of the most awful shit your brain decides to let you humor. That goes away lickity split. It's what looms and nags that drives you crazy.

Here's just a short list of things I have done or still do:

- When I was much younger, I used to look at the roads we traveled and either nod in agreement or disagreement on whether we'd take one or the other road in a fork.

- When I'm playing with my phone, I'll mess with the back cover by detaching the two top bits and then I'll try to press them down at the same time. If I don't, I absolutely much keep doing it until I do.

- If I feel a conversation has ended on an awkward or unsatisfying note, I can't help but stand in place until I'm either happy with the situation or I am forced to leave because of the hefty internal and eventual external panic I put myself through.

At times like these, my mind is totally blank and I am unable to even so much as commit to walking away. I overthink the simplest of functions and it's the most powerless I can imagine a person feeling.

- I often have to pick up and put down things to the beat of a song or basic rhythm.

Again. That is but a shortlist.

However, let's discuss another example and go into more extraneous detail (and this is why I titled this "Darktoid", so read at your own risk)...

LONG STORY NOT SO SHORT

I am pansexual. That is the first bullet point. To elaborate slightly, you could say that I have friends who are also very queer. Trans, non-binary, lesbian, etc. With me so far?

Now, I don't have many of them. It's a hard circle to stick with, and not for the lack of trying. Good friends are very hard to come by, let alone good friends within my own little community of sexual deviants honest, hard-working people. So, whilst I treasure all my bestest of friends, my queer friends help secure myself as who I am. Reaffirming that I am not immoral, but actually pretty special. Through not just shared interests, but shared struggles of acceptance within the general public. We're brothers, sisters, and whoelsers in arms and we need to stick together.

One of these queer friends of mine decided to delete me off of Facebook. No warning, no discourse, and with no idea what it could've been that caused it. The most likely scenario is that they lost interest in me. Quite saddening, but that would be something I could take under normal circumstances.

However, these weren't normal circumstances. Afterall, I am me. These thoughts won't quit until I have an answer. Even if that answer is negative. They could tell me to stink off you fuckboy, but I would at least need closure to not even necessarily the relationship.

I would need these thoughts to go away.

I messaged them, politely asking why it had to happen.

They saw the message and... no response.

"What have I done? Why don't they like me anymore?"

And then came the worst of the looping thoughts. The thoughts in my brain that would not cease, but increase in frequency and intensity. These are things that anyone might ask themselves in this situation. But, for me? They don't stop. And not in the "Boy, I just can't get that latest Adam Levine single out of my head!" kind of way. They stay there and torture me until I have sunken myself into a pit of deeply-seeded emotions that I, sometimes, can't control.

To quell some of this nonsense, I sent them a second message. Telling them how upset I was that it was not so much they deleted me, but that they were ignoring me. All I wanted was a reason. If it was something I said, I would like to grow and get past it. To better myself for when I am not primarily an Internetman.

Same as the last, they saw the message, but no response. Hours and hours go by, but no bloody response.

To say that it was tough holding in whatever it was that was building up in me would be a drastic understatement. But, I did succeed in holding it in. With tears, but I held it in. That hurricane of thoughts, feelings, and wanting to even hit myself. Hitting myself has, unfortunately, been the most recent evolution of my issues. When things stir too much or I feel I am wrong, but have no way to atone... it's not rare to see me hit myself.

For days, it lingered. That overbearing presence that threatened to, with just one bad day, send me over the edge.

3 days later, I was sent over that edge.

Now, I have a best friend who lives in Canada. Actually, the best friend. And my first love, at that! I haven't seen her in almost 12 years and I am constantly begging for an opportunity to fly myself up to at least see eachother with our now adult selves and minds, just in case we never see eachother again. Ya know?

As you might guess, I currently don't have financial independence. Or much independence in general. But, anyway.

Then, I ask, sometime later, what's up with that trip?

Then, anger happens and we usually fight about it.

This is all context for this upcoming and very recent panic attack I had. Don't worry.

So, going over the edge. Yes.

I'm opening up to my mom about the Facebook friend thing. She's consoling me to the best of her abilities, but I'm only getting worse. I can't, necessarily, be talked down given how these thoughts constantly swirl around in my head to the point of near brink. The best that can happen is that I either naturally calm down some hours later or I take some medicine that ends up helping a little.

Then, the conversation of seeing my friend came up yet again and, you guessed it:

That's when it happened.

Those incessant, bugging, nagging, pulsing thoughts in my brain exploded into an astonishing fit of panic.

I began to hyperventilate, cry profusely, and, unfortunately, yell at my mother that she was manipulating me. That my friends were manipulating me. That everyone was out to get to me and that I had no real friends. I was never going to get better, I was never going to get truly express myself and my sexuality, I would never meet anyone, and that I would die a lonely and fucked up pool of mental ailments.

I cried more at the thought of how much of a burden I put on my mother and aunt, whom, of course, I still live with.

I cried still more at the thought of my dependence on medication. That, especially, made me feel like such a shitting loser.

I guarantee, if you had seen me, you'd think I'd need to be locked away.

I ran out of the car, still crying and barely able to breathe, towards the house, and into the arms of my aunt where she, like mom, tried her best to console me. My aunt, thankfully, knew better how to handle me, despite our familial disconnection. I'm assuming her skills as a retired nurse helped.

That is, for better or for worse, where our story ends. One week later, I still have no idea what happened with my "friend" or what I could've done to prevent it. I don't know whether to loathe them or politely assume they just didn't know what to say.

But, nonetheless, that dread and paranoia of all my friendships being threadbare still resides in the back of my mind. Those looping thoughts of why this or why that still pitter patter away. Just like with anything else that my very naive and gullible brain latches on to, good thoughts or bad.

But, eventually, these thoughts do wane. They aren't nearly as prevalent as they were and I can now start to make peace with the fact that my "friend" was a cunt (considering what they put me through) and are not worth going over, yet a-fucking-gain, with a fine tooth comb.

I have fun. I can pursue. I'm seeing psychiatrists and, soon, a specialist for OCD. I'm also taking a new medication that should help with all this, which I'm, duh, hoping does work. The one medication I'm taking that I don't misuse. It's the big one I wanna take the right way.

I really do need to thank Destructoid for still being here for me. You guys are quite a large source of my aforementioned fun! Without you all, I'd be lost in a sea of senseless Reddit and NeoGAF threads, slogging through YouTube video after YouTube video, building no significant relationships and only merely existing.

Until I am better and until I can really be who I am to be, you guys will be there to help give an audience to my work and a little bit of meaning in my life. The front page, the qposts, and community blogs make up a whole that I don't want to ever lose.

You guys are the butt I don't want to see quit.