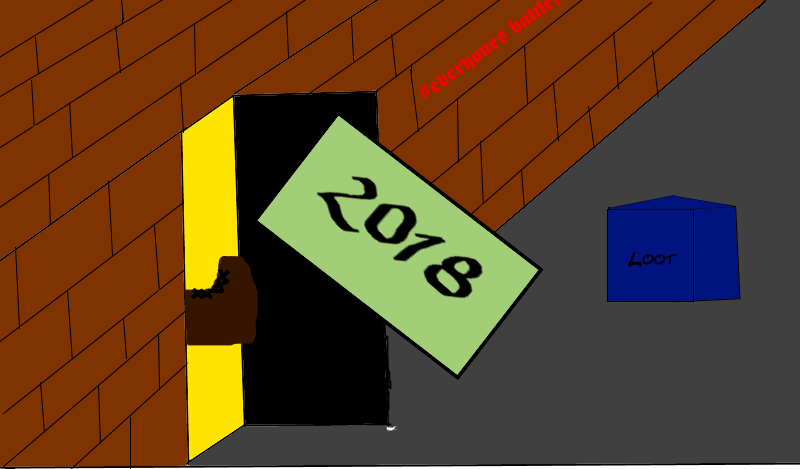 (Note: Links are to a mix of youtube videos on the subject or actual articles depending on what I could find, archives used for sites who have been naughty and I'm trying to show this without rewarding them)

Honestly this year felt like a weak year for the industry. Yes there were some big titles released but this really did feel like a year where the major must have titles were more sparse and either coming in the first 3 months of the year or last 3. With quite a few titled delayed until 2019 and some titles that probably should have been delayed until then and yet others that likely won't survive much into 2019 at this rate.

I like the indie scene, I tend to try to focus there more but some get up to some stupid stuff.

This year sees David Jaffe because technically he counts a part of an indie studio now.  With his position about Gamers going to the government when the ESA won't listen about lootboxes and his recent bizarre defence of Beyond Good and Evil 2 being online only. BTW at some point I actually will be hopefully turning up on one of his livestreams as a caller as I said I would to potentially debate lootboxes, no really I'm going to try and make it happen when I'm in a position I can actually be awake and able to call in via discord.

A special Smeg off to Brianna Wu who so far this year hasn't fixed her game on Steam which still contains critical game breaking bugs, oh and sells ~$5 DLC which is just cutscenes cut from the game. No this year Wu lead the campaign to deny Nolan Bushnell his GDC Pioneer award with false claims of him being sexually inappropriate for staff, while also literally downplaying, ignoring and telling to shut up some of the actual women who worked for him who defended him.

There is but one winner though. One dev deserving of the crown. Congratulations Zoe Quinn for being the indie developer to behave in my view worst this year.

How did Zoe behave badly? Well she seemingly just decided to ignore backers of her latest kickstarted game initially.
After it reached Kickscammed and after over 6 months of silence on a delayed game a backers only update was added.  Thus has followed 4 more months of silence. Now how did Zoe react to the number of people covering her new title and the issues round it? To complain that she'd had to interrupt her alledged $300 a night Japanese holiday, to say it was unfair she wasn't able to enjoy the holiday now and to claim all $80K for the game was gone and she was broke despite getting given money by Anita Sarkeesian on top of her $1.7K+ a month on Patreon and as part of her poverty claim she's had to get 2 jobs, 1 as a story adviser for an indie studio and another writing for DC comics offshoot Vertigo.

Then during the info about Rockstar employees doing 100+ hour weeks Zoe tried to push the entitled fans angle to claim she was having to overwork trying to paint her backers as entitled because she'd actually got to make the game she got funding for. I mean it may not be entirely false I mean she's likely got a lot of work on what with the 2 jobs, running Crash Override network, trying to finish Tingler and of course still working on her alternative game Jam Rebel Jam an event she was already taking donations for.

Oh and might want to renew the domain hosting before some-one else takes over that now vacant domain.

One of the things I did last year is do a talking heads segment because for many the term journalist just isn't valid anymore so I get to go through a list of some of the stupid stuff said by supposedly professional journalists or organisations.

This year Games Industry.Biz has likely outdone itself as a publication pushing anti consumer crap and trying to subtly shame said consumers. I get the publication is more aimed at business people but telling them that their audience are contemptible awful entitled people who just need a good shaming into line seems more like wishful thinking that having any kind of attachment to reality.

Well done to those talking heads this year who got upset that Far Cry 5 wasn't Republican murder simulator 2018 like they'd imagine. I mean who could have seen that coming? Well any-one who bothered to watch Inside Eden's Gate would have but hey why should I have expected professional paid journalists whose job it is to know about and write about happenings related to gaming to have spent 30 minutes watching a prequel film to an upcoming game? How entitled of me eh?

Rock Paper Shotgun is the next in the naughty chair. From the shaming of fans at the Final Fantasy XIV fanfest to linking in an tweet based on info from a forum who happily doxxed and harassed a social media manager and his family.

Next up is Waypoint whose chose to refuse to review a game because it didn't make enough of a socio-political statement for them and so they chose to call the developers racists.......... I wish this was me taking the piss.

I'd also like to give a special fuck you to PC Gamer for their #BullyHunters piece. A puff piece biging up what might be one of the biggest shitshows of the year and when they were getting  call out in the comments by people already seeing the flaws in the thing even before the first livestream chose to shut down the comments instead. Well done PC Gamer, you audience were giving you a damn good heads up about why you should be cautious with this and you chose to act to stop them warning you. Hope that egg on your face helps makes you less likely to fall for such bullshit activism in 2019. 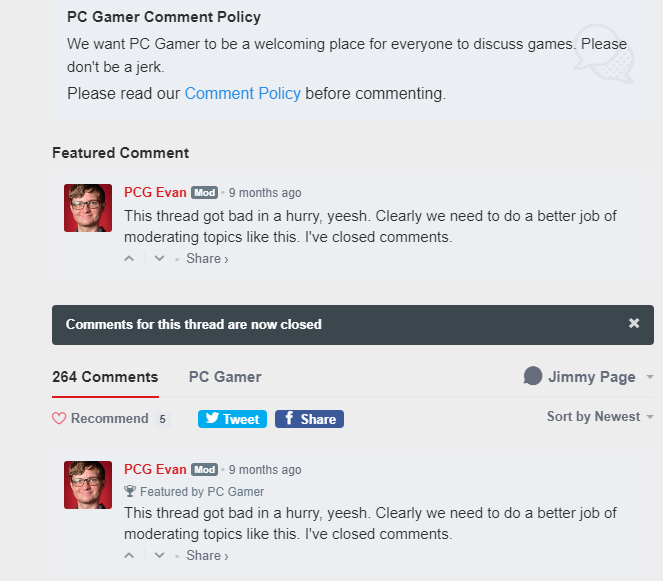 While I'm still going and being what, I'm sure some will say is, "Just the worst kind of person" I'd like to give a fuck you to those journalistic organisations that chose to try and misrepresent the firing of Jessica Price by arena Net. I mean is it any wonder why youtubers seem to be growing in popularity over traditional media when it seems youtubers are giving the whole story while some of the sites covering the story chose to leave out important details? (Destructoid didn't cover the story before any-one asks).

Oh and another ongoing villain Fruzsina Eördögh who decided initially to write a either a hitpiece or if it wasn't a hitpiece, as she claims, a giant piece of hackjob journalism about a deceased youtube critic and chose to release it around the weekend that would have been his birthday and then tried to get his widow to intervene when she kept being called out. Oh but dear reader it didn't stop there, you see Fruzsina then decided to suggest she might take legal action against said widow and decided to talk about lawyering up against said widow around a day before that would have been said widows wedding anniversary.

Well it wouldn't be a year in the games industry without the industry seeing if it is capable of cutting its nose off to spite the rest of its face.

This year we've had:

EA once refusing to comply with the laws of some governments choosing instead to go to court to defend their gambling mechanics.

EA saying it would tell untold stories from WWII and then instead choosing to re-write history instead because apparently they think people are incapable of seeing things in a historical context and understanding the social values of today aren't also those of the past.

Bethesda and Fallout 76:
The canvas bag issue
The Data leak
The Nuka Dark (yes it's not Bethesda making it but they licensed it)

Ubisoft:
Blaming gamers for lootboxes in the next Trials game
Microtransactions and increased grind in the new Assassins Creed.

Rockstar's 100+ hour work weeks
2K deciding to be a Grinch over people who'd unlock a rare card in NBA 2K19 some thinking it was a Christmas thing 2K were doing.

Activision:
Post release Microtransactions added to Black Ops 4
Diablo Immortal (they own Blizzard I'm blaming Activision)
The Killing off of the Heroes of the Storm Esports scene without warning.

A giant fuck you to 2018 and get the hell out and take all the crap with you and let us all learn from this and not repeat the mistakes in 2018.

Oh and just a final note, those who want to call me a twat or whatever please save the moderators here some work and yell at me on my twitter instead.