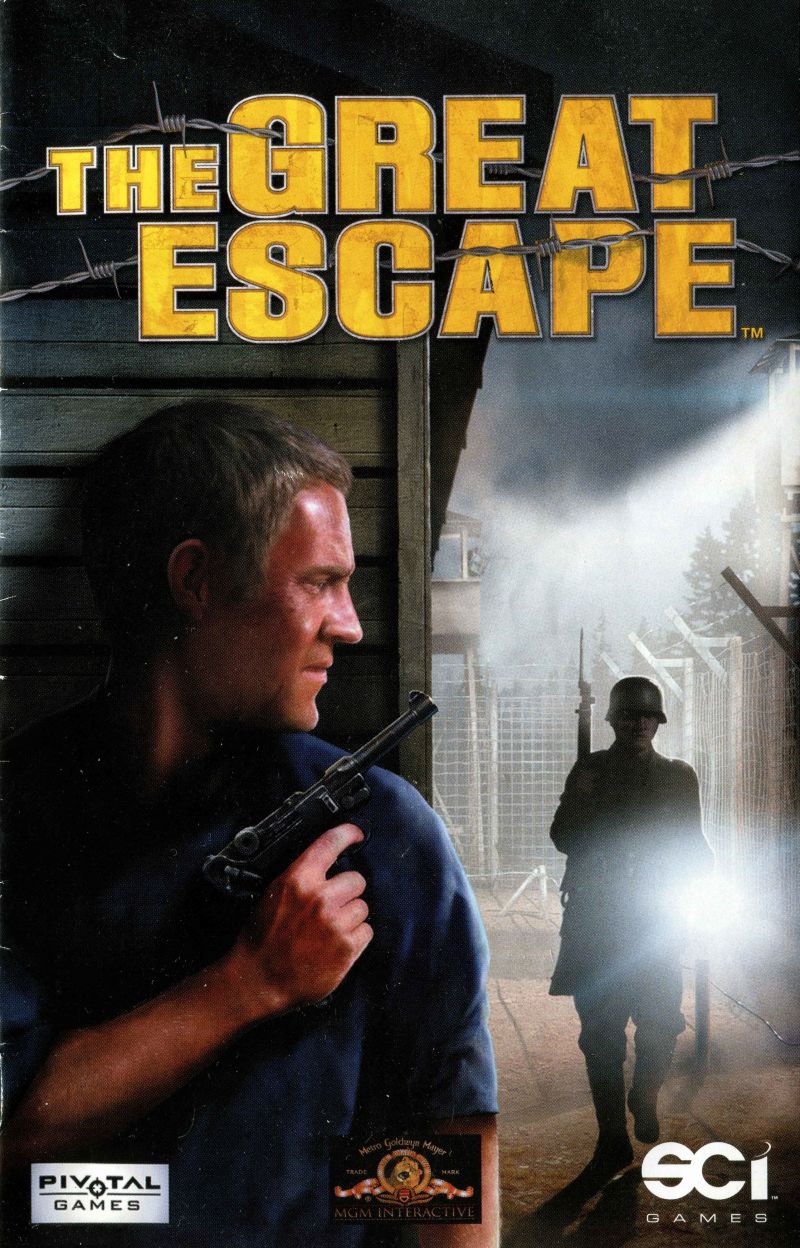 When I was a kid, my dad and I watched a lot of WWII movies. So much so, that they have become a source of comfort. Patton, The Longest Day, Where Eagles Dare and The Dirty Dozen were among them, and they bring good memories to me when I re-watch them today. One movie in particular has been a long-time favorite: The Great Escape, featuring big names of the time like Steve McQueen, Richard Attenborough, and Charles Bronson.

So you could imagine my surprise when I was scrolling through ebay one night, and I saw something listed as The Great Escape for the PlayStation 2. I thought that it must have been a mistake. In fact, it was real. Although I had never heard about the game, being a fan of the movie, I had to play it.

When I read LaTerry’s prompt for this month’s Band of Bloggers, I knew immediately that I wanted to write about The Great Escape.

I will start out by saying that this game is rough around the edges. It does, however, have moments where it shines, and it occasionally made me feel that sense of stealth that I want from an espionage game. The game also wins points in my book for attempting to portray the back-story of some of the POWs, and how they arrived at the camp that we see in the movie.

I will also add, that in doing my research about the game, I came to find out that this wasn’t the first video game rendition of The Great Escape. There was a video game from 1986 inspired by the film version, released on the ZX Spectrum, Commodore 64, and DOS. On top of that, there was a fictional television only sequel titled, The Great Escape II: The Untold Story. The version I played for PlayStation 2 was also released on the Xbox that same year. and on PC the following year. I suppose I learned that there’s way more “Great Escape” lore than I previously realized. 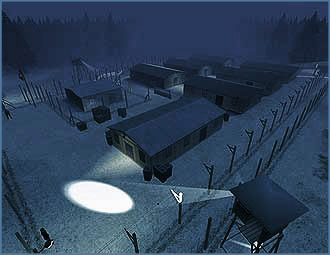 The game manages to capture the atmosphere of the movie decently well. While walking through the huts at night, there are non-playable-characters doing various menial tasks. Some are fast asleep, while others sit restlessly at a desk, writing. The restlessness of the NPCs serves to remind the player that there is a sense of immediacy. An escape is being planned, and it weighs on everyone.

Even the wind in the background reminded me that I’m running around in a hastily built wooden hut, with little-to-no insulation, during a German winter, much to the tune of terrible living conditions. The game manages to capture that feeling of dark, cold isolation, mixed with desperation for escape: everything that this movie-to-game tie-in should portray.

I encountered some funny moments, though. At one point, one of the guards spotted me outdoors. I started running, and was able to run right past another guard and inside the building. Then, I hid in the corner until they gave up their search. I suppose this isn’t entirely unrealistic, but it felt weird to run straight toward the guard and not have him be able to stop me.

On top of that, I very clearly ran into the building that he just stepped out of, so he should have been able to find me. Lastly, he returned to the same chair where he was previously sleeping, and immediately went back to sleep after giving up his search for me. Honestly, this was kind of hilarious. I immediately stepped back out from the corner where I was hiding, and walked directly in front of him. The other funny thing is that because of the shoddy graphics, you couldn’t tell if his eyes were open or closed.

These moments are always kind of fun in certain old video games. There were elements that reminded me of playing the original Splinter Cell, such as the task of peeking through keyholes in order to see where the guards are. Splinter Cell is, of course, much more nuanced than The Great Escape. But the effort to create a stealth game is certainly there 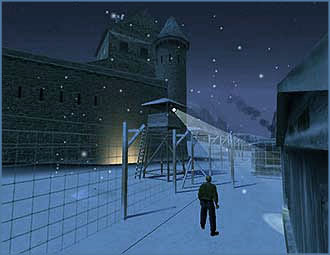 Like any stealth game, memorizing the guards’ foot-patterns is integral to the game play. If developers ever figure out a way to make in-game AI that are smarter than this, then I think the stealth genre will be forever changed. Even in the Phantom Pain, once you spend enough time with the game, you start to realize that the guards’ intelligence is quite limited, and their line of sight is unrealistically bad. With that said, I think any fan of the stealth genre is happy with, and understands that, stealth games are all about patterns: learning and memorizing patterns, and navigating yourself through those patterns in a quiet manner, staying undetected, and avoiding combat whenever possible.

There were moments where I would crawl, stop, and wait to see what the searchlight was going to do. Tedious? Perhaps a bit, but I like stuff like this. I don’t want games to always be easy, especially not stealth games, and although I know that this game is far from portraying true-to-life espionage, the thing I really want is to feellike I’m fooling somebody, duping a guard, outsmarting an enemy, and overall, just sneaking past an otherwise sentient and intelligent human using nothing but my wits. Even if I’m technically achieving none of these things, I still want to be fooled into thinking that I am. I did have moments like that throughout playing The Great Escape. Many, in fact, that forced me to stop and watch the searchlights or guard patterns to learn what they were going to do, only to have to then integrate my plan within their patterns. 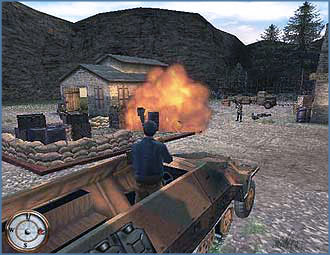 With that said, I won’t excuse the game’s clunky side. At one point, I escaped from a guard and made my way to a hiding spot. For a moment, I thought I might have actually escaped. Instead, the game got stuck on a loop of the guard continually repeating, “What are you doing,” over and over again. The audio glitch only ended when I re-loaded my save file.

As for the story, we know that all of the imprisoned allied officers were formerly shot down and captured, but we never saw this happen in the film. The opening moments of the game actually see the player walking through a damaged aircraft just before bailing out.

That same character, MacDonald, then winds up in a prison camp (prior to the camp from the main storyline). When he escapes, he is captured and brought to a castle, which actually wound up being one of my favorite parts. The castle section was surprisingly difficult. The devs did a really excellent job of making this one linear area seem huge. It wasn’t always clear where I was supposed to go, and I thus got caught sneaking around several times, and had to retry the area.

Much of the rest of the game sees the player committing to similar tasks, only as other characters from the movie, such as Sedgwick the Australian, Hiltz the “Cooler King,” and Blythe and Henley. 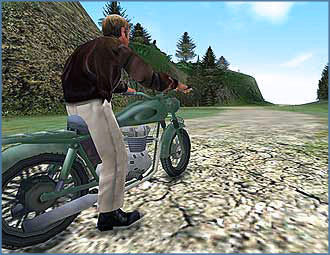 So far, my thoughts are that this video game rendition of The Great Escape is just completely weird. I suppose that’s exactly why I wanted to write about it. It’s just strange thinking about a movie that came out in 1963 would be turned into a video game in 2003, exactly 40 years later.

My only guess is that the original film left a lasting impression on a lot of people, enough to inspire a team to create a video game based around it. I am definitely glad I spent a little time with it. It is one of those awkward games with clunky controls that still attempted to deliver a fine product. Despite some of the bugs I encountered, playing the game was a fun experience overall.