I'm not big on New Year's Resolutions. I love the idea of using the new year to put the past into focus, and to plan on how to best improve yourself, but something about them has always felt... indulgent. Like the performance of resolutions is what matters, and not all the silent ways people adhere to them when nobody is watching. Which is why they so often end up unrealistic. But I do really want to resolve a few things, especially regarding myself and my place here.

And, before I get any further, I am going to talk about my personal issues and shortcomings, as well as my place here in the community. This really isn't a call for attention even though I pretty much said that's what New Year's Resolutions are. I will, in all likelihood, delete this within a week, and if you read through this, you'll understand why. It wasn't easy to write.

So, for my first resolution

Be a Better Member of the Community.

I know, it's vague. But this is on the list.

I frequently get into arguments, most notably with my nemesis Dwavenhobble, but also I've argued with Keiichi Morisato and Rudorlf. And I want to make it clear that whatever internet disagreements I have, it's not personal. Even you, Dwaven. If I had the choice for you to leave or stay, I'd always choose stay (though you don't seem to have been very active recently).

But I have to accept that my comments, while from my side are always in good faith, might come across worse to those who they're aimed at. I need to be better at communcating. I need to remember just how much doesn't come across in text discussions on the internet.

So to anyone who I've belligerently argued with, who feels like I've been an asshole, I'm sorry.

Not only that, but in 2018 I joined the CBlog Recap team. And it's been great being a part of it. It took me a little while to get the hang of recapping but I feel like a real part of the team, not just the newbie. That being said, I definitely feel that some weeks I struggle to focus on it. It hasn't been helped by the departure of a few other members, meaning the team is essentially on a monthly rotation right now with little in the way of reservists. The frequent rotation does draw some of my free time away from what would otherwise be blogging on my own topics. I'm not sure I can fix this myself, but I can at least try to do a better job of time management to prevent this from happening more often.

One weirdly time consuming aspect is just deciding what to topsauce. I don't know if anyone else feels this way on the team but it adds a little pressure to recapping as I always feel like I've made a wrong decision. I try to topsauce the best blogs but also bear in mind thatt the recaps do get frontpaged, so I tend to not topsauce community in-jokes, even though some of them have been great reads, and I don't know if that's right.

I also don't know if there's going to be a recap of the year (probably not, given how stretched the team is - including myself) but it's something I'd love to do maybe for next year. If everyone adds all the topsauced blogs to an end-of-month or end-of-year blog as they go week by week, we could . Hell, we could even have a best of blog awards, but given the state of the team that sort of thing isn't really feasible right now.

Don't be a Coward

This is the big resolution. I'm an anxious person, and like all anxious people I tend to overthink and catastrophize and that holds me back.

This will be my third year as a member of this community. Can you believe it? It barely feels like I've been here for 6 months. And that's on me. So many of my interactions are coloured by anxiety and that makes me a peripheral figure.

And I won't lie, when I see how easily newbies like Soulbow or Adzuken integrated into the community, or how brave the navi is a lie was when she came out as trans, or how quickly Cedi was given the chance to become a contributor, I hate myself for feeling a little jealous, even if I really am happy for everyone. I could never have made a shitty siege meme, I'd have always felt afraid to talk too much about my interests and that I was annoying others, even if Soulbow proves that people who earnestly like things are welcome here. So s/o to you Soul, for actually helping me realise my irrational fears were just that. I could never be open about who I am because I struggle with intimacy even in simple social interactions. I could never adhere to a blogging schedule because I always hesitate to upload. And it's all because I'm a coward.

It occurs to me that you, reading this right now, must know so little about me. You don't know my age, my real name, what I look like, where I live (beyond the UK), what my relationship status or sexuality is, what I do for a living, or more. I feel like just a cipher floating through this community, occasionally posting but mostly lurking and upvoting, almost never putting myself out there in a visible or tangible way.

One of the big things for me this year was finally publishing my first blog, on my history playing football games. I'd been wanting to blog for a long time, and when I finally did, it was frontpaged. And I'm very grateful to DToid for doing that. Seriously. It might seem like not that much, that it only got fronted because it was topical, or worse, like I'm tooting my own horn (there's that anxiety again), but it really did matter to me. It helped give me a vital confidence boost that I'm going to remember for 2019. It validated my feelings towards being a part of this community. 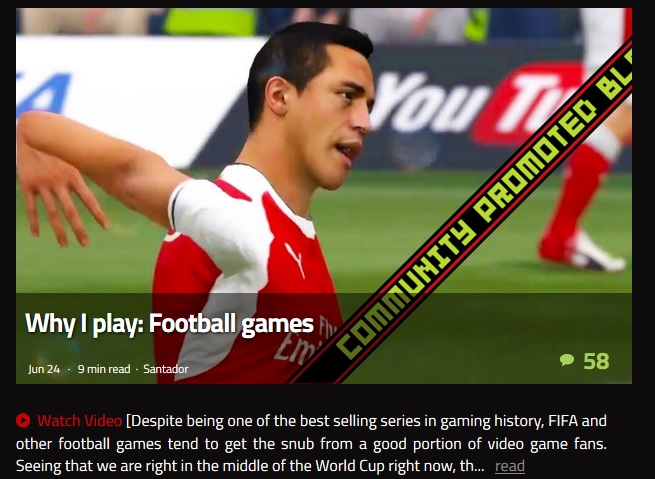 This still makes me feel proud.

So, why haven't I kept up with it? And where are the Mass Effect blogs? Where's the FF13 blogs, you liar? Well, the answer is they're written. They just haven't been posted yet. Despite committing to writing a long series, I'm hesitant to actually post them as I don't want to be the guy who never shuts up about one thing. I hate feeling like I'm just abusing the blogs to go on and on about something, or like I'm overshadowing everyone else, preventing them from being read (if being a recapper has taught me anything, it's that most blogs deserve to be read). But, again, it's cowardice. I've written other blogs that I should have posted by now. I've half-written a series on mature content. I've written a series analysing MGSV (so that's 3 big analytical blog series waiting to be posted). I've written a personal blog about how Super Smash Bros helped me bond with my stepbrother after my parent's acrimonious divorce, something that was honestly difficult to finish. All these blogs that might have been interesting for others to read, that went unposted because of fear, bad time management, or laziness. And I need to do better. I want to blog covering my favourite game of all time, Dragon Age Origins. And maybe the entire series. I want to continue writing my fanfiction and maybe post a link to it, or cover the process in a few blogs. And I've got the ME Andromeda tie in novel to review, too. 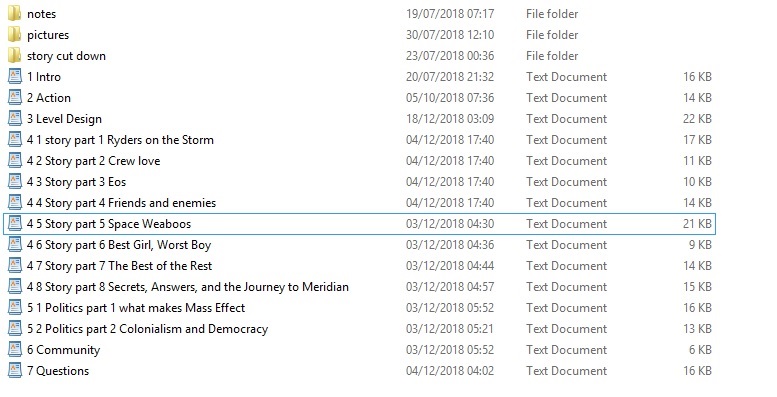 Here's the entire series, my last editing pass being weeks ago

So, I'm gonna get a schedule. I'm gonna post my 2 blogs about my favourite TV shows of 2018 in the next 4 days, then I'm gonna post 1 ME blog a week until they're finished, even if I end up as the guy who won't shut up about ME. I'm gonna take that spare day or so I get every now and again and devote that to queuing up blogs to be released.

This is perhaps the most generic of all New Years Resolutions. After all, we could probably all do with eating a little healthier and exercising a little more. But I have to take on a more serious health concern.

2018 has been, for me, a year of healing. I took large stretches of the year off just to focus on getting in a better mental state. I'd been suffering from the terminal buildup of the effects of burnout that I'd ignored for too long and I needed to deal with it. Of course, not everyone in my life knows this. Few even understand it. To a lot of people in my life I must seem lazy, or unmotivated, but I honestly needed the time to just heal. I went through most of the year without a phone just because I didn't want to talk to anybody. I feel that I've worked through a lot of personal problems that I couldn't have done with the constant chirping of whatsapp groups, twitter notifications, or facebook statuses, even if this has come at the cost of my personal relationships. I feel like I understand why people live on mountaintops far from the rest of civilisation. I feel like the choice to be alone was the best thing I did last year. But I do still have some issues to contend with.

The problem is I have insomnia. I never sleep in more than bursts of a few hours and often wake up disoriented and still tired, sometimes with my heart beating out of my chest. And I need to fix that, whether through diet, exercise, meditation or even medication. I've been scared of sleep medication because of how easily people seem to overdose on it, but I think that if I need it, then I need it. There could be a more dangerous health concern underneath all this so I can't afford to ignore this any longer.

But, beyond that, I'm always tired. And living my life through a haze of fatigue really affects every interaction I have. I'm often irritable, which could be a reason why I find arguments so easily. I often procrastinate, unable to really focus on tasks I set myself. And I find myself up at strange times, like right now, I'm writing this and it's 4AM but I feel like it's midday. So I'm going to stop and see a doctor in the next few days.

I know what I need to do. I need to get healthy and be less of a coward. I need to learn from members of this community that I admire, and be less afraid of opening up. So, let's rip off the first band-aid of the year.