Asterix & Obelix XXL 2 is a beat 'em up with platformer elements originally developed by Étranges Libellules and published by Atari for PC, PSP, DS and PS2 in 2006. It somehow got a remaster handled by Osome Studio and published by Anuman in 2018 for PC, Switch, XONE and PS4. The titular Gaul duo find themselves pursuing their druid Getafix, who has betrayed his druid compatriots and kidnapped them to Ceasar's city of games, Lasvegum. There, Asterix and Obelix have to go through each district of the city to free the druids and confront Ceasar and Getafix.

By Toutatis, What Even Happened Here?

I can't say the plot of XXL 2 has much to offer. Even though the characters are proven to be excellent in the books and films, here, they're barely utilized. Outside of the FMVs at the start and end of every district, there's just no story happening.

And even then, calling it a story is almost giving the game too much credit. Our Gaul duo kinda just comment on Lasvegum a bit and offer some scarce voiceovers during gameplay about the Romans. And then you find a druid, who gets one scene and then the game cuts to Ceasar being angry. Repeat thrice more and the game is over, making for a less than stellar run time. It's a very safe and cheap creative choice, but I think it's a shame that Asterix and Obelix don't get some more characters to interact with.

You'd think that a city of games would at least have some novel bosses that antagonize you with some fun banter, but the game is fine with just letting the environments do the talking. And how do the environments converse? Via video game references, of course!

The game is touted as a parody of other video games, but it's really not. What the game actually does is use video game iconography as set dressing to spruce up the areas. And to that end, it's pretty much a success.

Since they don't use many of the parodies for the sake of comedy, it just becomes a game of hunting down some neat and sometimes somewhat obscure references. I mean, who the hell would expect the Cooper Van in the tutorial of an Asterix & Obelix game? A shame that there's no first-person mode available so you can get a better look around the areas though.

Again, I think this was a very safe and boring decision. But then again, video game parodies are extremely difficult to nail. You have to be very careful not make the obvious jokes and be extremely grating. Still, I can't help but appreciate that you get to throw so many Sonic-themed Romans down what are essentially toilets. It's like poetry, it rhymes.

The combat system is surprisingly unique, but not terribly deep. Which is ok for a kids game, especially since everything works as designed.

You have access to a simple combo, a dropkick (!) and a grab. The dropkick stuns enemies and once they're stunned, you can grab them. You can also perform a ground pund, as well as send out Dogmatix to stun a Roman in the general vicinity. Fighting normally also builds up your Fury meter, which speeds up attacks and improves your damage.

These are your basic tools, with more opening up whenever you grab a Roman. Then you can whip, body slam or twirl your unlucky weapon to bash his friends to places unknown. Which is one of the more efficient ways to work through the ARMIES of romans the game asks you to beat. That 2500 up there ain't hyperbole. It almost becomes a chore to beat so many, especially in the optional survival challenges. The kinaesthetics pull their weight though, as it's rather satisfying to bash Romans in the head.

What I really like is that with the exception of the rare magic potion and the last few upgrades, there isn't a degenerate strategy, so you can fight in whatever way you want to good effect. As stated before, there isn't much depth, but your toolset is engaging enough to carry the game. Same goes for the variety of game character Romans, even if the normal ones get a few too many reskins for my liking.

But they have nothing on the bosses, which are just different fights with the same giant Roman every time. You have to bring him down in different ways, but it's still the same dude, which really sucks, when you could be fighting some more inventive video game-themed bosses.

Then there's the matter of the differences between our two heroes in combat. Namely, there's basically no difference between them, save for Asterix's ability to drink magic potion and the slower attack speed Obelix got with the remaster. 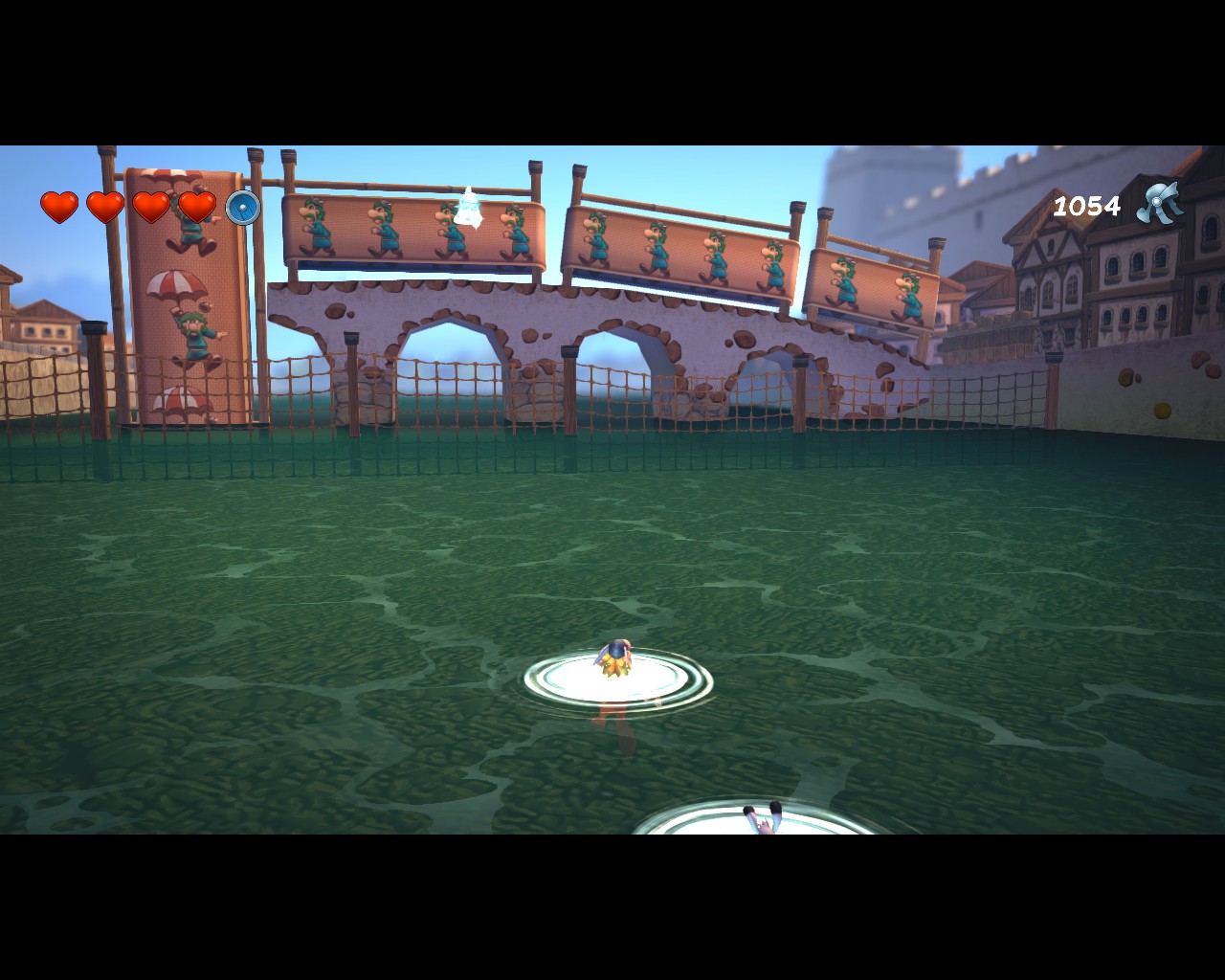 You'd think that Obelix would be stronger, or at least have greater range than Asterix at the cost of speed. But no, they play the same, save for the aforementioned tiny differences. There are only two things the game does to make you swap characters in combat. The first is to seal the game's strongest attack behind a team-up move where you throw a grabbed Roman to the other character and catch him to really bring the pain.

The second are these in-fight challenges that reward you with an item if you do a specific attack with the correct character to a certain Roman. It's a smart move to teach kids how to do the more complex moves and help you remember how to play after returning to the game after a break.

A Field Day In Lasvegum

Outside of combat, the game provides some standard busy-work from the era that barely counts as puzzles. Stuff like pushing bombs, hitting switches, splitting up the characters via character-specific abilities, a bit of simplistic platforming, some chaotic cannon sections and some rope-riding in what looks like an outhouse.

It's all fine (aside from certain shooting sections and whenever the camera acts up slightly during platforming), but not terribly interesting. You're barely weaker without the other character, so splitting them up doesn't impact combat as much as it should. The game would've done well with some actual puzzles solved by swapping back and forth between Asterix and Obelix. 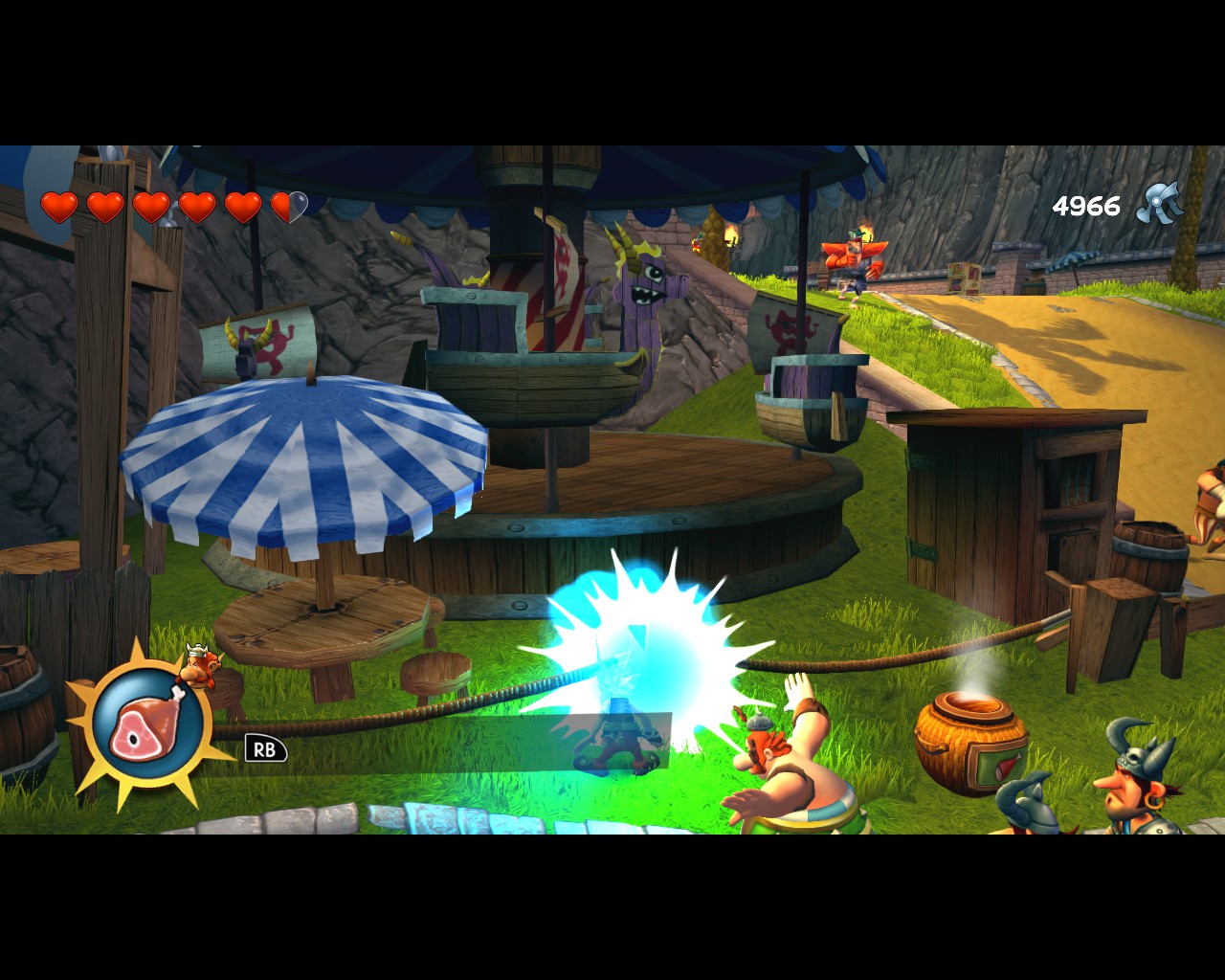 Just about everwhere you go will bring about Roman helmets, which were used to open levels in the initial version. They do that in the remaster too, but you can also use them to buy upgrades now. There's only one actually new ability, but getting slight upgrades to the ones you already is nice, as it expedites combat a bit. Sadly, they missed the chance of giving Asterix and Obelix unique upgrades to actually separate them mechanically.

The remaster brings some new collectibles as well, and finding them can be pretty fun, but it's only the pre-existing diamond helmets that actually require some effort. It's nice that they put in some new extras, but postcards and a model viewer isn't the best collectibles to be had.

I'm thinking they're testing the waters for the third game with these collectibles and the new upgrade system, which I welcome. If we're lucky, they'll keep what works and put some more effort into things outside of swatting Roman soldiers into space.