Lost in The Corridors of Wolfenstein 3D 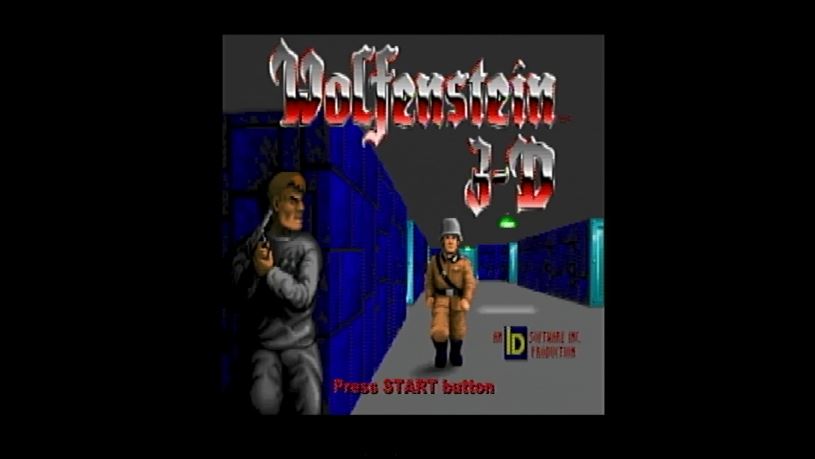 I boot up my PlayStation 3, and I'm greeted by the warm sound that accompanies the load up screen. I press X to cycle past the standard "health and safety" warnings that always wait while loading up this machine. Every time I turn on this beast, I remember how much I love the layout of the PS3. All of my digital games sit in a folder, waiting for me to scroll through them vertically. Most, when pausing over them, display an audio loop and show a background image. Some games will even display a video loop in the background. While I love my PlayStation 4, I can't help but think that more care went into designing the PS3 interface. The background images, videos, and audio loops are as memorable as some of the games themselves.

Especially memorable to me is Wolfenstein 3D. This shooter from a bygone era remains as one of the more unique games in my PS3 digital library. It isn't so much that the game play is unique -- although in its time, it was perhaps the only game of its kind -- it's more the fact that I have a classic PC game from the early 3D days sitting in my PlayStation digital library. Playing PC games on PlayStation still feels novel to me, even if classic games have been ported to the PlayStation Network for years now. 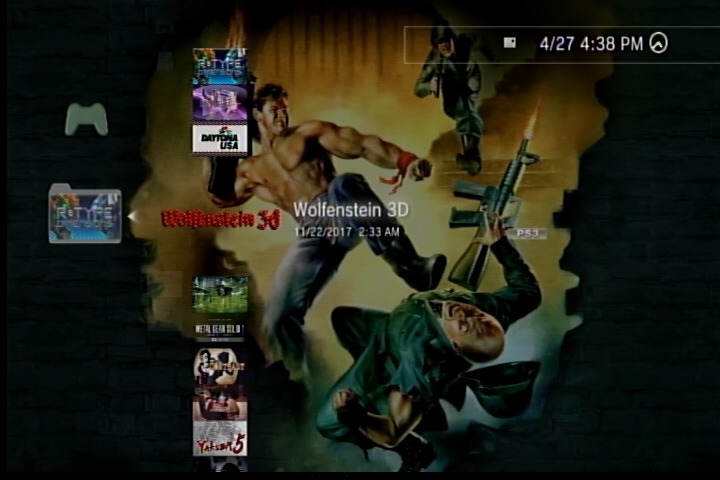 I recently sat down with id Software's classic shooter, Wolfenstein 3D. This game exudes darkness at every corner, and there is an eeriness that can be felt from its primitive graphics. Underneath the layers of Nazi imagery, however, there is a unique and often challenging exploration game. What might be considered mindless violence is really a beautifully crafted memory game.

People often call Wolfenstein 3D a puzzle game, and that tag has been applied to other games of the genre. The "puzzles" that people refer to are more akin to escaping from a maze. There is no logic needed other than remembering the corridors you've already traveled through. In a sense, this is a type of puzzle, but truthfully, if you scan the walls long enough you will eventually find the right path. That doesn’t make the exploration easy, though. The game forces you to create a mental map. If you don’t, you’ll be lost for quite some time, and the game punishes you in this way, forcing you to be better at remembering your way around the levels.

This brings me to my theory that classic first-person shooters are not puzzles at all, but memory games. If you can remember your way around the map you'll be fine, but the maps were often designed to be confusing. One map in Wolfenstein 3D even has a hallway in the shape of a swastika. I believe the developers had only one goal in mind there, and that was to confuse and entrap the player. 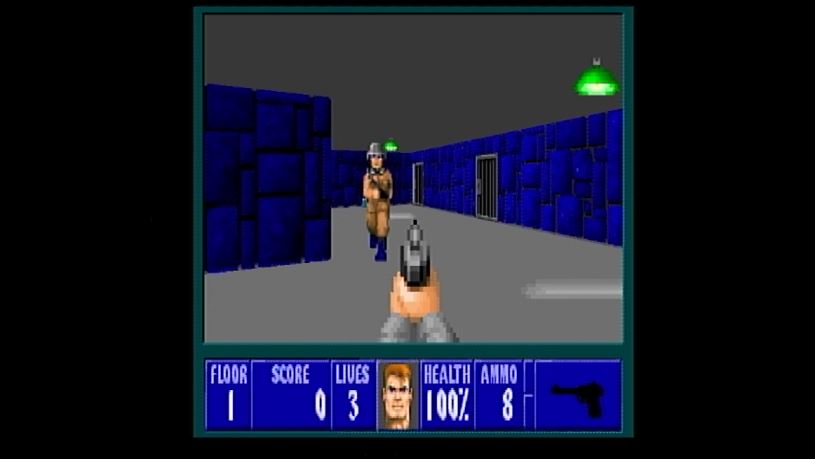 And of course there are secrets. Talk to anyone who knows this game well, and eventually the topic of secret doors will come up. I think a lot of players were surprised the first time they walked up to what seemed like a normal wall, only to reveal that it could be opened, and that something lay hiding on the other side.

The notion that any one of the walls might contain a secret passageway opens up an entirely new world of possibilities. I will admit that I’ve never been the kind of player who has to find every secret, although I admire those who do. The one thing I will say about the secret doors in this particular game is that they are often designed to help with the boss fights. It seemed as if every boss area had secrets with extra health and ammunition for the player, assuming you can locate them before getting gunned down. 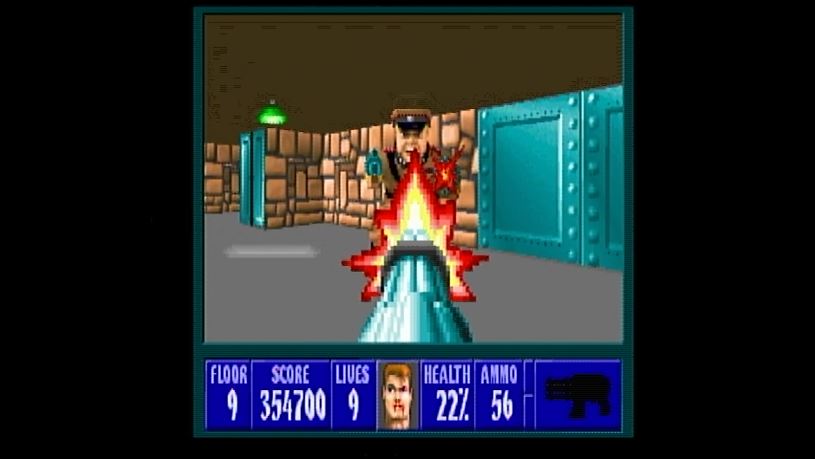 My introduction to this genre started with DOOM 95, yet somehow I had never played its WWII precursor. I remember years ago, when my family got our first home computer, my cousin loaned me his copy of DOOM, along with a handful of other games.

I played DOOM many times in the late 90s. The mixture of horror and science fiction had me obsessed with exploring its levels. I also remember wondering, who are the human enemies, and why do they fight alongside of the monsters?

My cousin told me they were Nazis, which might have been his personal theory since he played Wolfenstein 3D prior to playing DOOM. The official designation of the human enemies in DOOM is that they are possessed, dehumanized former soldiers, but in my mind, they have remained as some strange incarnation of a futuristic Nazi. 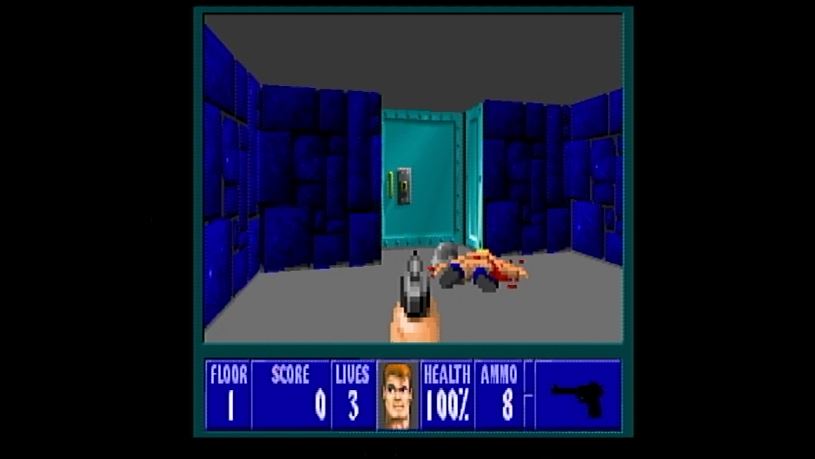 So finally getting to visit Wolfenstein 3D today, I am now experiencing a game that spiritually precedes DOOM in many ways. The game play in DOOM expanded upon that of Wolfenstein 3D, most notably in the way that the character can shoot at enemies on higher platforms. Although the caveat is that the player cannot actually aim at enemies above them. The bullet flies upward automatically if there is an enemy on a higher platform. The actual aiming only occurs on a left and right axis.

Being limited from aiming up and down might be a turnoff for players today. On harder difficulties, however, bullet dodging from left to right can be surprisingly difficult, and for players who enjoy some solid cover based shooting, the highest difficulty settings for games like DOOM and Wolfenstein 3D almost require the player to use cover whenever being swarmed by enemies.

Wolfenstein 3D pioneered a genre that continued with several game series throughout the nineties. The element of searching for buttons on the wall to find the next door has become so synonymous with classic first-person shooters. This, coupled with the exploration that forces the player to create at least something of a mental framework of the level, is a formula that popped up in other games of the day, most notably DOOM, Heretic, Hexen, and Duke Nukem; lesser known games such as Blood: One Unit Whole Blood and Shadow Warrior; and eventually online shooters such as Quake, Unreal Tournament, and Starsiege: Tribes. 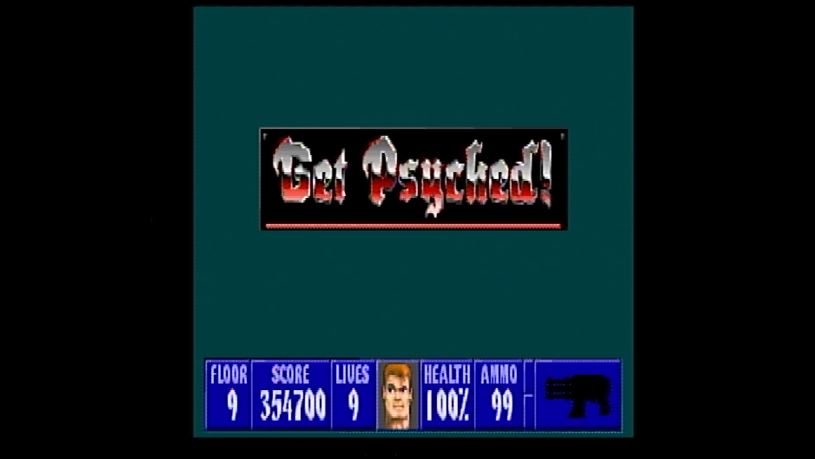 But when id Software was at work on Wolfenstein 3D, they were still in the early days of experimenting with textures. Thus the game contains only monotone colors on the floor and ceiling, with the exception of an occasional light bulb. The only textures that can be seen are along the sidewalls, usually in the form of bricks or steel, and some of the levels show what is meant to be castle walls, but with a green algae looking substance growing from them.

It is this bare and somewhat unnerving lack of texture that gives the game such a creepy vibe. When running through corridors, the light fixtures on the ceiling seem to float towards you. This makes the whole experience of Wolfenstein 3D feel like a nightmarish alternate WW2, where the Nazis went so far as to raise corpses from the dead, experiment with human-cyborg weapons, and of course, foolishly imprison the wrong guy to their own detriment: B.J. Blazkowicz. 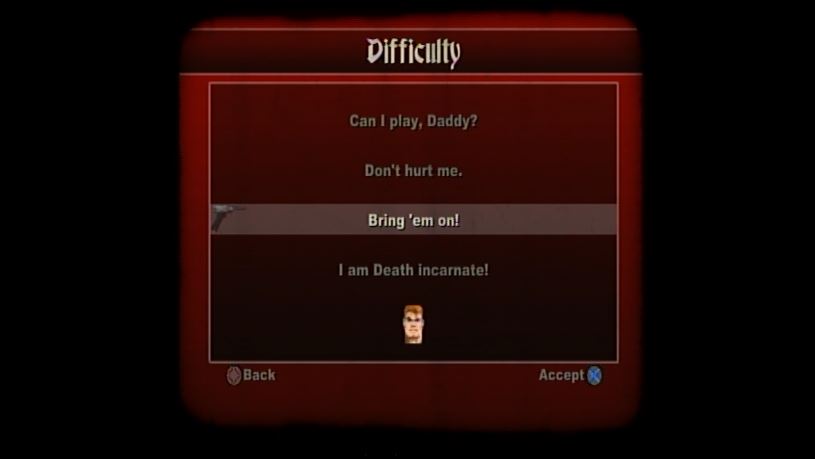