Parasite Eve is an action RPG developed and published by Square on the Playstation in 1998. The game serves as a sequel to the book of the same name, but stars a new lead in the form of New York police officer Aya Brea. She survives a bizarre fire incident where everyone but her combusts and an opera singer transforms into something called Eve. This Eve can cause horrific mutations in just about any animal, turning them into monsters. As such, Aya gets on the case to hunt her down and stop New York from being overrun with goop and mutant rats. 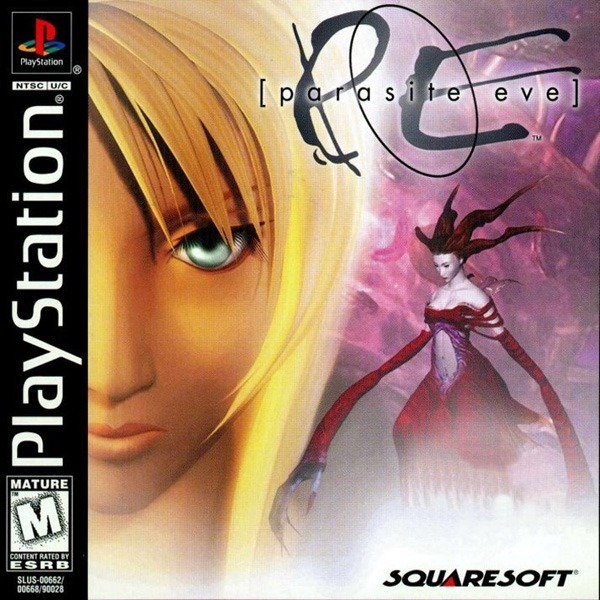 Breakowski, You're On The Case!

As far as RPGs go, Parasite Eve sports a unique narrative. It's set in New York for one, with no demon summoning in sight even. It's very focused and centered around Aya's journey to come to terms with the powers her encounter with Eve has awakened and her plight with her past. And even ignoring that, it's a spiffy police drama with a nice sci-fi bent. If you squint heavily, it could almost be a Fringe movie.

Out of everything it does well, I really appreciate the pacing. I've found myself thinking that many RPGs could do with a trimmed plot and Parasite Eve certainly makes a good case. The game has very little filler and alternates between exposition downtime and FMV-fueled action set pieces. It's a good mix, well fit for something not set in an unknown fantasy universe.

The book matters very little, aside from serving as the inciting accident that brings Aya into the picture and offers a backstory for Eve's existance and motivation. I'm glad they went this route, as the plot of the book works better as exposition to this more explosive narrative. 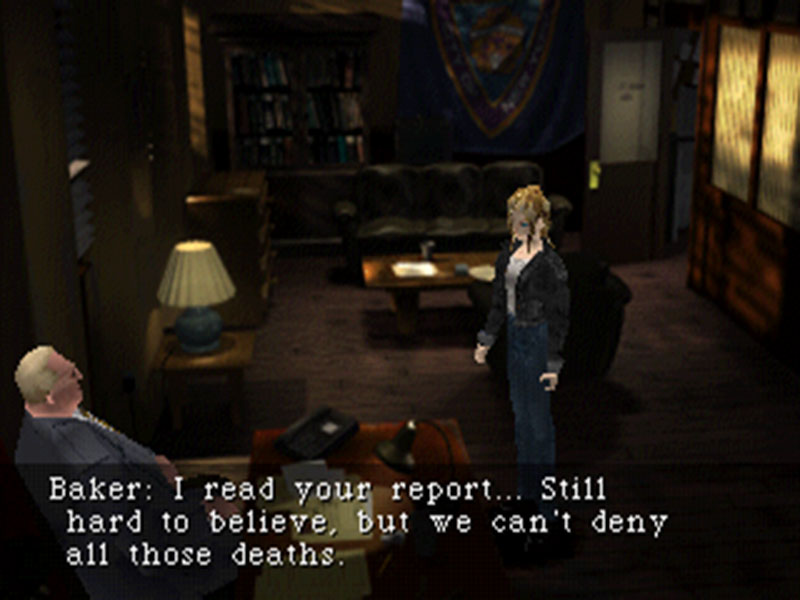 Lastly, I wanna give props to Aya's partner, Dan ”The Man” Dollis. He's a bit of a stereotype as far as police characters go, but I can't help but adore the things he does for Aya, his son and all of New York, in spite of being at risk of combusting just like anyone else in town, except for Aya. And lord almighty, did he punch that reporter good! Which is horrible for a multitude of reasons, but it works so well as a character-establishing moment that I can't help but love it. Also, why does this game remind me of FF7 so much?

As with the plot, the combat is very unique for the genre, as it mixes the ATB system from Final Fantasy with with its own brand of action. It's engaging and matches the pacing, but is not very deep.

Combat takes place in the same pre-rendered areas that you explore to progress, only with a locked camera and a wide variety of baddies that spawn from thin air. The action part of the equation has to do with the free movement you have access to while waiting for your action gauge to fill up, which is the ATB part. 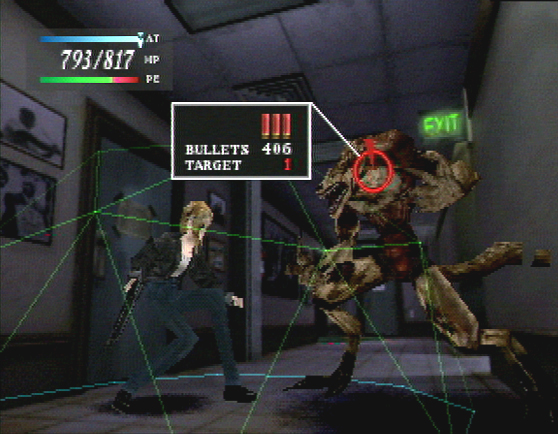 Sadly, moving around in combat and hoping that you can dodge attacks is about the most skill the game asks of you, aside from maybe some rudimentary strategy from time to time. You can really feel the lack of some juicy movement options that you'd find in a game more tuned towards action. I'm really missing a dodge that rewards you in some way when you have perfect timing. That'd give the game freedom to throw more complicated attacks at you as well.

Once the action meter is full, you get an action. This can be a volley of gunshots (up to the amount of shots your current gun supports at whatever enemies are in range), an item or a Parasite Energy ability.

Picking what to shoot first and if you should unload all your shots for maximum ”turn” efficiency at the risk of taking a hit demands a bit of thought, but the game could have done so much more. Since the game sports some enemies with multiple aim points and a scan ability, I'm disappointed that they didn't go further and have body parts play a bigger deal in combat. I could easily see enemies taking extra damage in the head, but requiring closer shot range, or have certain body parts explode when destroyed to deal damage to other enemies.

PE abilities are literally Final Fantasy spells, excused in the narrative by Aya's budding mitochondria. Which is both dope and stupid, so I approve. PE energy recharges in combat automatically, but doesn't allow you to store away a lot of it.

This is great incentive to actually use the spells as often as you can, which other games could learn from. They're not anything special, but after a while you get a decent selection. The correct use of which could be what turns the tide of battle. But again, I wish they had more complex applications in combat. As is, damage, healing and speed buffing is all they're good for. No poisoning a boss to change their moveset, no way to set certain enemies on fire so they run around and set the area on fire and certainly no way to transform into a Final Fantasy summon so you can blast mutants to kingdom co... 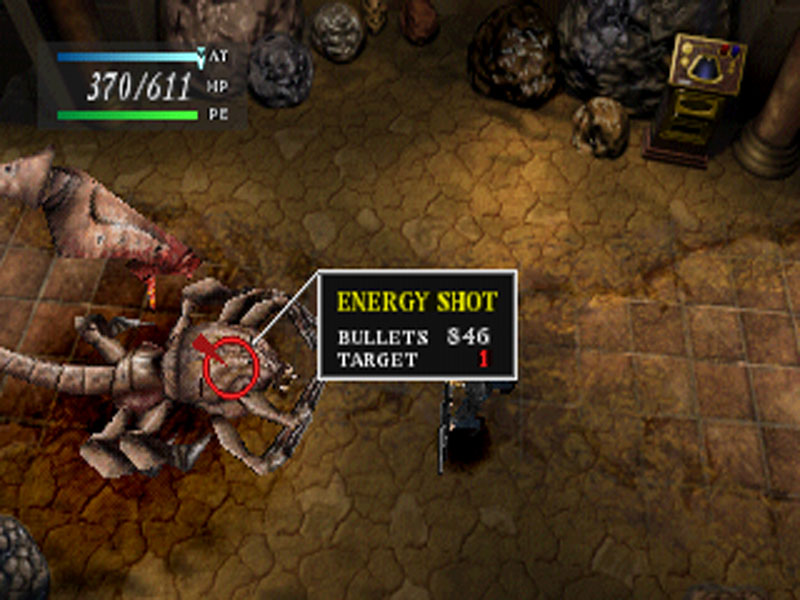 No wait, you can do that last one. It's frikkin's rad.

You're On Inventory Duty Today, Breakowski

Taking a page from the Resident Evil book, item management is a thing. And it kinda sucks.

Not the item limits themselves (the game isn't especially conservative with healing items), but some things at the edges of the system. For starters, you can't use up healing items at the battle result screen, so if you don't have room for something, you have to swap it with something in your inventory or throw it away. You also can't throw away certain ”special” items, even if they're seemingly useless. Instead, you have to dump them in the basement of the poilice station, which can result in some hefty backtracking. This isn't the case for all of the keys, but some of them are hellbent on wasting your inventory space. Hopefully, I just missed some place to use them and the game actually let's you throw away all keys.

Aya's limited inventory increases in size with levels and BP spent on upgrading it. BP feels like a bit of an afterthought frankly, as the only other stat you can spend it on is turn speed, leaving the other stats to the predetermined will of the stat chart.

But thankfully, there is some tinkering to be done with the customization system. Every gun and piece of armor has base stats, bonus stats and special abilities. By spending a tool, you can destroy a piece of equipment to transfer either the bonus stats or an ability to something else. By using a rare super tool, you can even transfer without destroying anything.

This is how you'll get an edge in combat, but it's mostly just a numbers game, as there aren't many abilites (which have some fun effects) outside of NG+ to play around with. Oftentimes, you just have to check what has the greatest base stats and transfer your accumulated bonus stats to it and move on.