Pro-tip: Play the embedded songs in sequential order for the best experience in reading this review.

Scarface, a 1983 remake of the 1932 film of the same name, is about the journey of fellow Napeleon-esque Antonio "Tony" Montana (Al Pacino) from his rise to being a drug baron, to his downfall consumed by his gun-trigger temper, his incestuous relationship with his sister, and him getting high on his own supply. While many people, including real-life drug barons, dictators (Saddam Hussein!) and hardcore gangsta rappers (To the point that one has his stage name called Scarface), considered this film to be one of the greats, I personally though it was an "okay" classic at best.

While Al Pacino was incredibly entertaining with his questionable-yet-hammy Cuban accent, the rest of the cast was just sort of there. Oh, they tried. But none of their performances could stack against the ham & cheese of Tony Montana, the film kinda drags a bit on certain scenes, and the moral of the story (Being a gangster ain't good, mmmkay?) were lost amongst the cool, stylish and iconic '80s excess in display. Still, the second-to-none production value of the film, the gorgeous-yet-dated soundtrack by Giorgio Moroder, and some really impressive cinematography, meant that Scarface is still a worthwhile for first-timers at the very least.

While I thought the ending was perfect for a character like him, there are some were annoyed that Montana didn't notice the assassin behind him and finish said assassin off instead. Well for you type of guys, your wishes came true, as Radical Entertainment released the video game sequel Scarface: The World Is Yours, across various platforms on 2005. Just in time for me to review it on the 35th anniversary of the movie's US wide release. 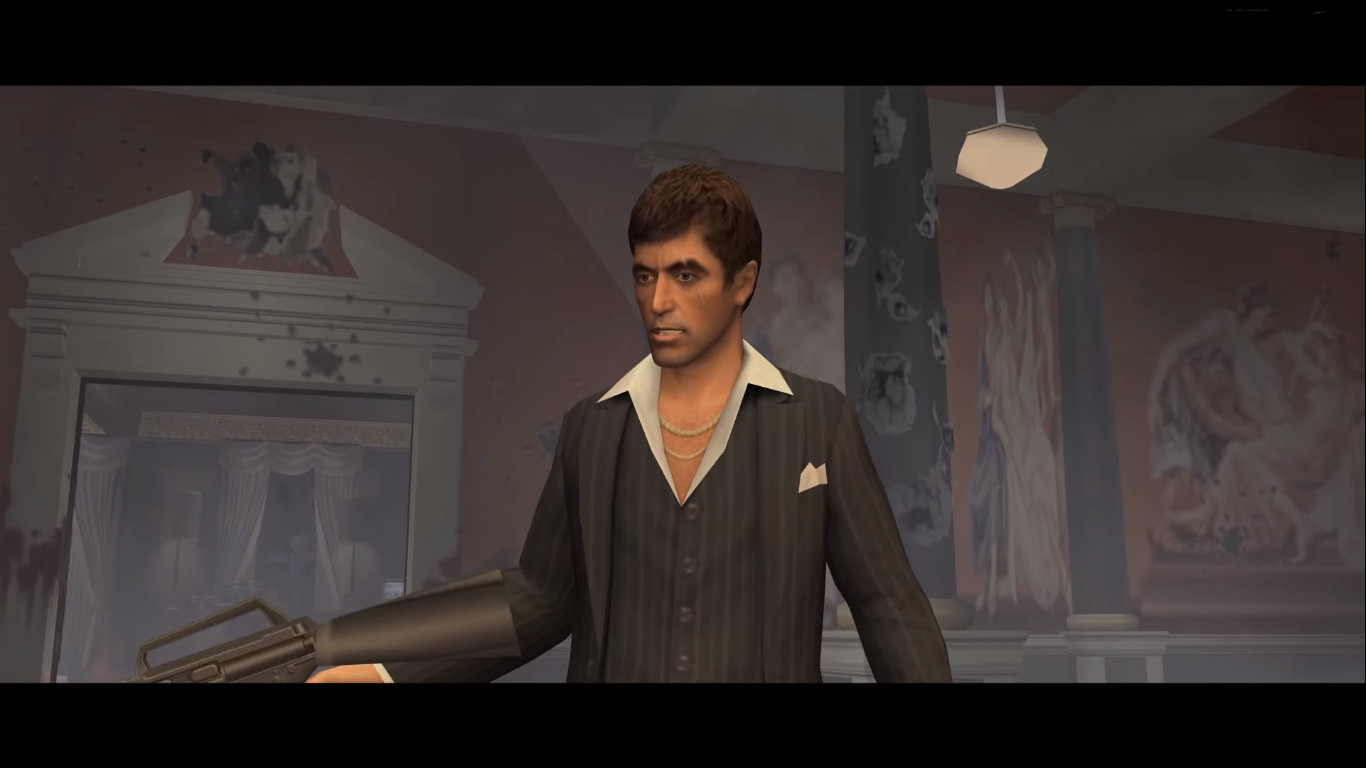 There are times when in-game Tony does look good...

Set in an alternate Scarface universe, as Tony Montana does one final stand against Alejandro Sosa's cockroaches, he dares to break movie canon by turning around to kill the would-be assassin (or you can chose not to if you really love the original ending), and even escaped the ruined mansion just before the cops show up! Tony then lay low and sworn to quit cocaine cold turkey, before going back to Miami and ressurects his empire, minus his past mistakes.

First of all, the story is bad, amateur fan-fiction level bad. The overall plot is actually nothing more than "Tony Montana kick some ass, take back Miami and kill Sosa. The End". No story arc, nor any character developments. It's pretty much a wish-fulfillment plot to roleplay Tony unleashing fury at his best, Grand Theft Auto-style. So if you want at least a substantial story on this official fanfic sequel, then you might wanna skip this one. 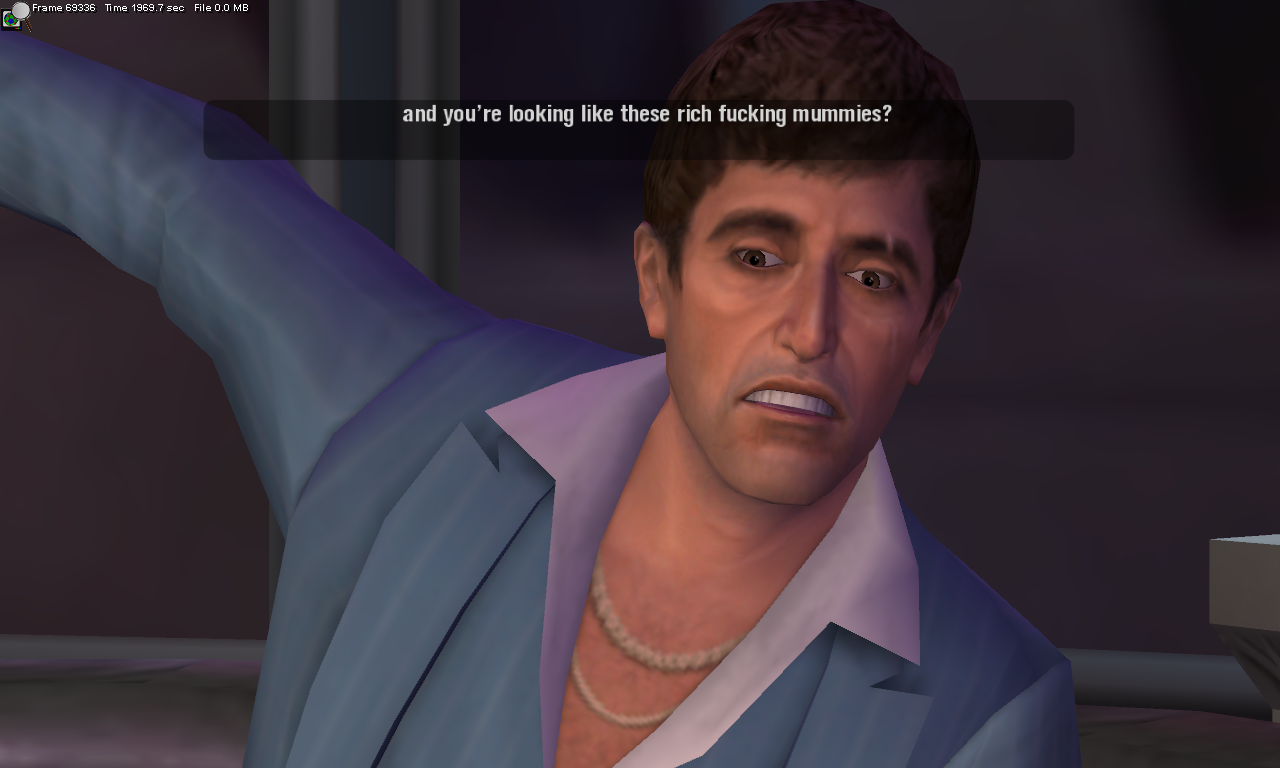 ...And then at other times when the uncanny valley kicks in.

Tony Montana (whom was voiced by André Sogliuzzo due to the aging Pacino struggle to attempt the same young Cuban voice), on the other hand was really good, as Sogliuzzo did a commendable effort in retaining Montana's speech and mannerism. However, the depiction of Tony during the events of the game felt pretty jarring at times. Sure, in-game Tony is not exactly the same as movie Tony, as the former does his best not to repeat the same mistakes as his movie counterpart, but seeing the nicer, less-tempered Tony in action just seems strange, to the point that at one scene near the end, one of his lines and the way he delivers it was so out-of-character, I literally straight up said "That's not how Tony would act!".

On the other hand, all of the A-listers like James Woods, Ricky Gervais and Daniel Dae Kim, and even returning casts like Steven Bauer and Robert Loggia (As different characters), were utterly forgetable in their numerous minor roles, so much that there's no point doing the Who's Who: VA Edition whenever their voice was heard. 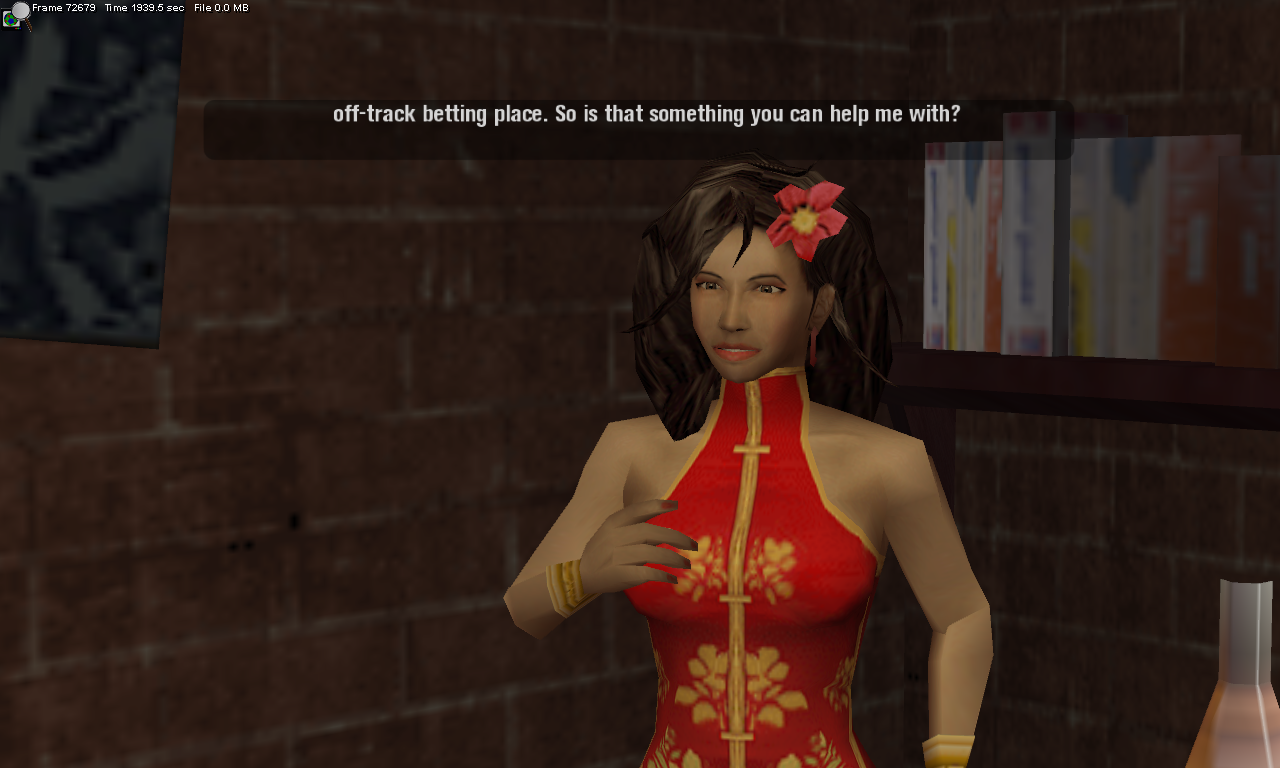 Still, could be worse for Tony.

The graphics of Scarface: The World is Yours is decent for a sixth-generation console game. The small-sized depiction of Miami (and various islands) is certainly more detailed than even the world of San Andreas, especially with the character models with advanced face animations that look terrifying at hindsight, but all of this comes at the cost of poor performances across both consoles and PC. Even on a modern PC that could run San Andreas (with proper widescreen) at the highest settings, Scarface struggles to run higher than 30fps even on a 4:3 letterbox resolution (widescreen can be edited via registry, though its options were finicky as well), as well as numerous stuttering throughout the gameplay, at least in my experience.

Of course, no aesthetically-realistic '80s games could be completed without a huge selection of bangin' period soundtrack, and Scarface certainly delivered that part in spades. Along with some of the finest '80s hip-hop, rock and latin to date (There's also a few hits shared with Vice City like the ones from Afrika Bambaataa & Grandmaster Flash and the Furious Five), it also included the whole of the movie's licnesed soundtrack (Like the ones in this review!) for you to listen to anytime, on foot and on wheels. The Walkman feature that predates Saints Row IV even! The score is good too, composed in a similar fashion to Moroder's efforts.

If you haven't figured it out, Scarface: The World Is Yours is a open-world sandbox game where you progress through the game by killing rival gangsters, buy properties and rake cash through coke and silver tongue. To advance through the story, you need to gain enough reputation to unlock the next area of Miami. In addition, you have to purchase enough exotics (ie. expensive cars, boats, furniture, etc.) to proceed through the next story, which is a bit annoying. You can also decorate your (ruined or restored) mansion through "Pimp My Mansion", and litter them with expensive stuff for showoff. Also, there's the options to purchase both ashes of Manny Ribera & Gina Montana, because familia, amirite?

Being a mob boss, Tony does have a lot of uses with his cellphone, like calling your henchman to get your bullet-proof vehicles on the spot, and buying and upgrading your weapons on the fly. Oh, and the game has a swear button, so feel free to get Tony to swear anytime, to anyone, and anywhere. (Except in cars, unless you crashed onto another car. Why won't it let me swear anytime like a senile person while on the wheel?) 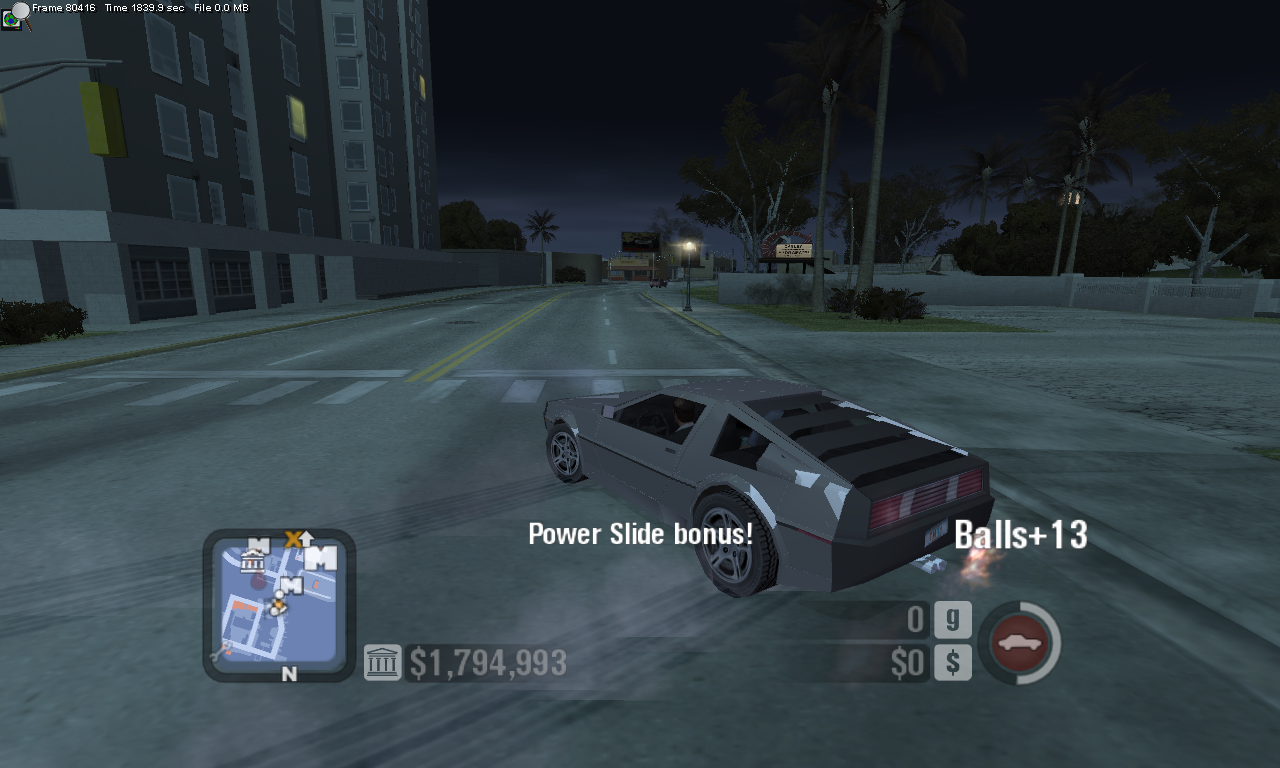 Who knew the Delorean would be a really fun powersliding machine?

Gunplay is very similar to the GTA games it emulates, except that Tony could only carry up to 4 weapons on-foot. But he also have a "Balls Meter", which temporarily transform the game into a first-person perspective, making Tony invincible in addition to healing him, and giving him bottomless magazines. To regain his balls, he have to blast his enemies to bits before pressing the swear button to refill the meter, which can make shootouts both badass and funny at times. The one odd thing about it is that Tony refuses to shoot any innocent bystanders (Which can make certain shootouts really annoying), and even if you lob a grenade launcher at one, he'll trip over and then get up like it's nothing. Oh, so I'm not allowed to shoot a random stranger, but when I hit and run someone? No worries! The police radio will pronounce about it and the car I drove for the crime, and 5% of probability at best on any cops in the precinct would even bother to look for me.

To get more money to take over the town, Tony needs to get the yeyo. And to get the yeyo, he needs to make deals with suppliers, with the help of a conversation wheel. The conversation wheel works like the sort of meters you see in golf games, you need to hold the button and let go at the right time to buy the yeyo off a supplier at the cheapest price, otherwise you'll either bought it on a regular price, or you'll risk pissing him off and him opening fire at you. The wheel would also brought up whenever you sell the coke to a dealer, launder your dirty money at the bank at a discount rate (AKA the only place you could save your progress outside of completing the story missions), or whenever the cops approach you and threatens to confiscate your dirty money and drugs. 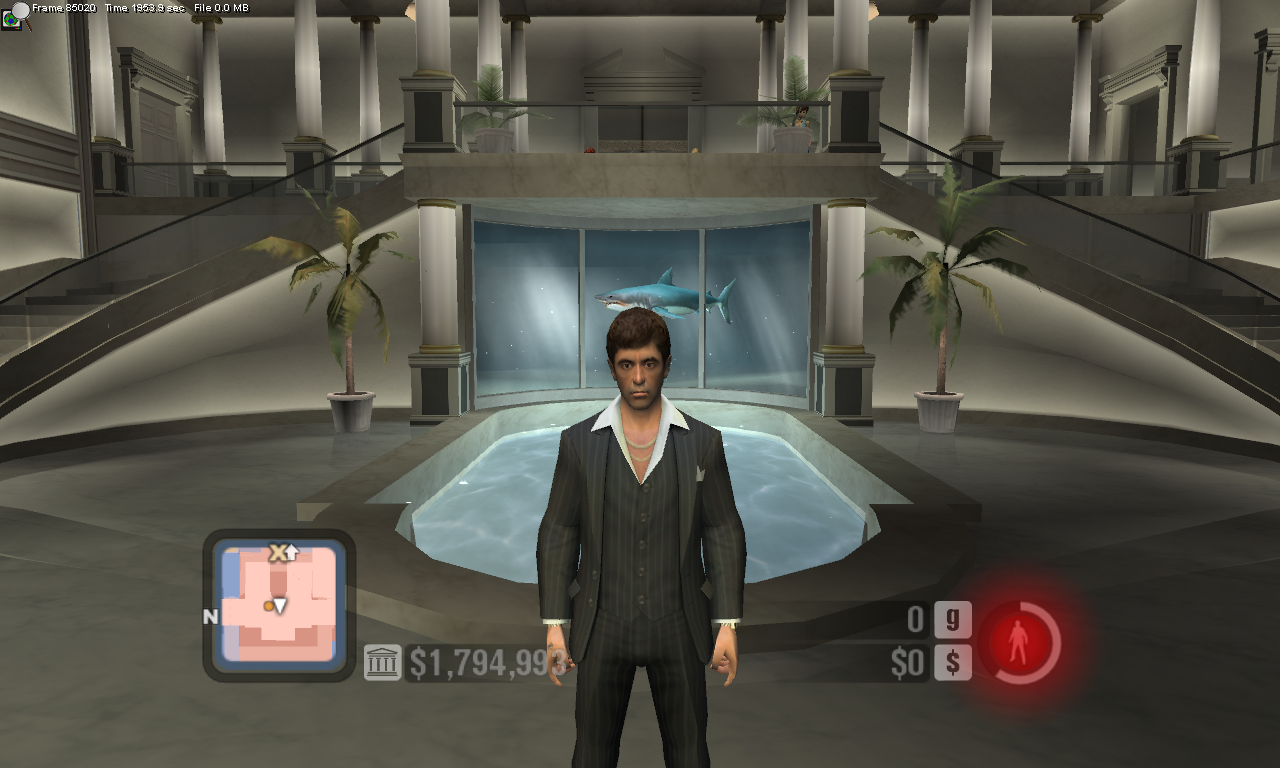 Speaking of law enforcement, the cops here were a huge pain in the ass to deal with. As you wave your gun and blast 'em loudly around in open public, the attraction meter will increase, and when it eventually filled up, the cops would show up and try their best to gun you down. The law enforcement works a bit like what you experienced in Grand Theft Auto IV (Which copied the idea from this game), if you landed yourself in trouble, you'll find yourself surrounded in the police's circular search area, and you'll have to escape from their area and their sights for a short time before they'll give up and go back to business. The major problem is that the patrol cars in this game were tough as nails, and fast enough to catch up with you more than a few times. If the cops meter eventually filled up, you'll get a "You're fucked" message, which means that you could never escape from their super-sights, and all the cops in town will keep chasing you until you're dead. Sure, there's an option for you to bribe Vice Division to lower both gang & cop heat, but the cops in this game were just so cheap to the point of that they more often than not soured my experience with the game.

All things considered, Scarface: The World is Yours is a competent GTA clone. While its progression and gameplay can be frustrating, and there really is not much of a story around Tony Montana's villainous "redemption" setup, this is still one of the better film-based video game during its time. Just prepare to endure its performance issues.

And now for arguably my favourite Scarface soundtrack. Have fun! And thanks for reading!