Run 'N' Guns are a wonderful example of the Platformer and Sidescroller genre. So i'm going to give a detailed low down of what I think are the best RNG's in Video Gaming history out of the Time Skip and alternate world side of things... 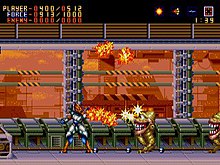 This game is pure evil(In the good way), this game really got the Contra series going with it's action movie intense plot. If Contra 3 didn't exist(and boy, i'm glad it did!), this game would most likely be the best!

Hard Corps(or Probotector in Europe and Australia) takes place 5 years after Contra III; making the game feel like a time skip of some sort.

It speeks for itself - just stare at it...

Because Bill Rizer and his boyfriend buddy, Lance Bean, are at the hospital... or being a family man??? - A new team was assembled known as THE HARD CORPS(get it? Hard Corps, like hard core??? Ugh, never mind) to take out the leader of a vile terrorist group named Bahamut. Our heroes: Ray Poward, Sheena Etranzi, Brad Fang, and BROWNY, yes browny. These roughcut heroes must work together, or alone to take out the threat and save the earth!!!

The game just spells awesome! Intense boss fights, fast gameplay, and cool weapons! What makes this game cool is it's ability to store up to four weapons at a time. With this new feature, you can become an overpowered God with four of the most badass weapons in the game - just to lose it all in one hit.

The Blaster Master series is known for having some rare gems, and then a real shit game(Blasting Again). But Zero is a great game to play you are a hardcorps blaster master fan *wink*. 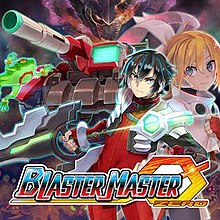 Ah, Inti Creates, you guys really know how to remind us of Mega Man ZERO!!!

Inti Creates crushed it with this one! The game has a plot similar to the orginal, but also taking some cards out of the Japanese counterpart Metafight. Earth went into Ice Age for a long time into the deep future, resulting in the humans living deep underground. The Ice Age was caused by chaotic wars and deadly fights that was more than likely over some political shit(Gundam? Is that you???). Let's go deeper into the future, where we meet Jason Frudnick, a nerd who's really in to robots and stuff like that, making him a total Shonen Protagonist. One day, he was minding his business until a strange from ill-advisedly named Fred appears and then jumps into a mysterious portal. Jason obviously follows and finds a large tank called "Sophia III" and rides it fighting mutant creatures that mysterously began attacking the underground.

The game is a classic but enhanced 8-bit sidescroller like the original; however it features some mechanics that will be a surprise to you - but not many. You can also jump out of the tank and begin playing a top-down styled run 'n' gun which begins almost an entirely different game! Latet, the game introduced DLC that you would definitly love to see in this game: Gunvolt from Azure Striker Gunvolt keeping all of his abilities and "septima skills", Ekoro from Gal*Gun with her charm abilities was also featured.

I can't even begin to talk about this game! This seems almost like a re-telling of the plot but it's actually a sequel to the original.

Taking place sometime after the original(although not specified), the "God of Ruin" known as Golden Silver was destroyed, and warped reality and somehow created 4 moons that conviently started orbiting around Earth(Because Saturn or Mars was too good for them). Because moons can develop as fast as chicken can lay an egg, a fifth moon was forming; leading to the creation of an evil threat arising, this threat being known as... Golden Silver, again :p. A group of heroes known as the Gunstars who their codenames are in honor of the colors original Gunstars, Red and Blue must now fight the evil Empire that threatens the world(Gee, that sounds like Contra: Hard Corp!). 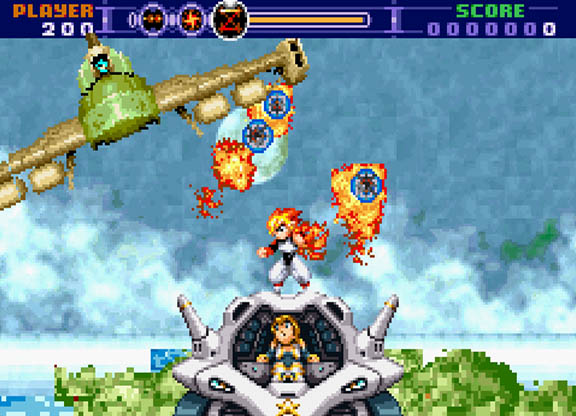 The gameplay heavily altered and the levels are like the originals but edited and more organized. Red now focuses on free shot and Blue uses melee attacks(both characters can use melee's though). There is no longer a weapon combine system(Which, in my opinion is the best system in the origional), however there is now the ability to choose 3 weapons whenever you want to.

So what do you think of the list? I know it's short but i'm separating this into parts because of my school-plagued life. Next part will be entirely made of Indie Games so get ready! Let me know what you guys think so far and if I should continue it!