I've played the paper format since Ice Age (barely have any of my old cards), but I haven't played this game in the competitive scene because I hate the competitive scene for trading card games. It has its own air of toxicity that you have to experience firsthand. This is far from the MTG simulator that players have been waiting for. It's designed to push the current sets and just feels shallow. I am going to be pretty bias in this review because I am comparing it to what I feel an ideal trading card game played online should be like.

There's a short tutorial involving Nicol Bolas, but that's the closest you get. It's not that big of a deal and they at least put some effort into the tutorial, which is always nice.

The game does a good job of presenting the traditional card game in an electronic format. The art and the card text is easy to see. The layout is nice and simple. The animations are plain, but there are some special effects for some of the rarer cards. Since the game's initial release, they have added more varieties instead of just screaming monsters and slamming all the creatures onto the board. They actually have added many different effects for different cards that affect multiple targets since the game first started. I wish they would do something for common and uncommon cards too. 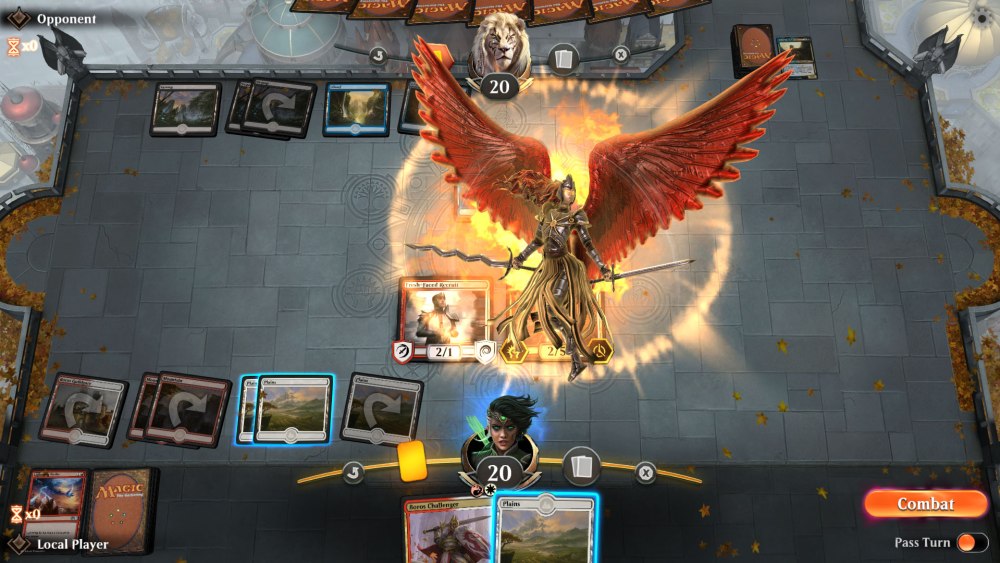 There is alternate art, such as animated cards and stained glass style. I do wish there was more though. There are some good looking cards, but I wish that you did not have to spend real money for some of these and more of them could be earned in game.

There are five colors of cards, each with its own theme. There are also some color combinations with extensions. Green has a lot of cards that can generate land and powerful creatures with trample. Black usually has ways to kill other creatures though it may come at a price. White has a lot of powerful enchantments and lots of effects. Blue is control. Red usually hits fast and hard. But, there are also color combinations with different effects in the introduction of Guilds of Ravnica. The red and white combination has Mentor, which allows a strong creature to empower a weaker creature when it attacks. The black and green together have undergrowth, which lets you send cards from the deck to the graveyard faster and can utilize the graveyard as a resource. The result is that there are cards for different play styles. Each color has its own mechanics and there are many ways to play around different strategies.

Each card pack costs 1000 coins. You should be able to earn that much if you have three daily quests to complete and a win, so you could expect to get a pack every two to three days. The problem is that a lot of special modes also require the coins to enter for what is mostly inferior prizes. All it does is omit common cards once you get a certain point, but the risk vs reward for most drafts are just bad. You might as well just play ranked to improve your end of season rewards. 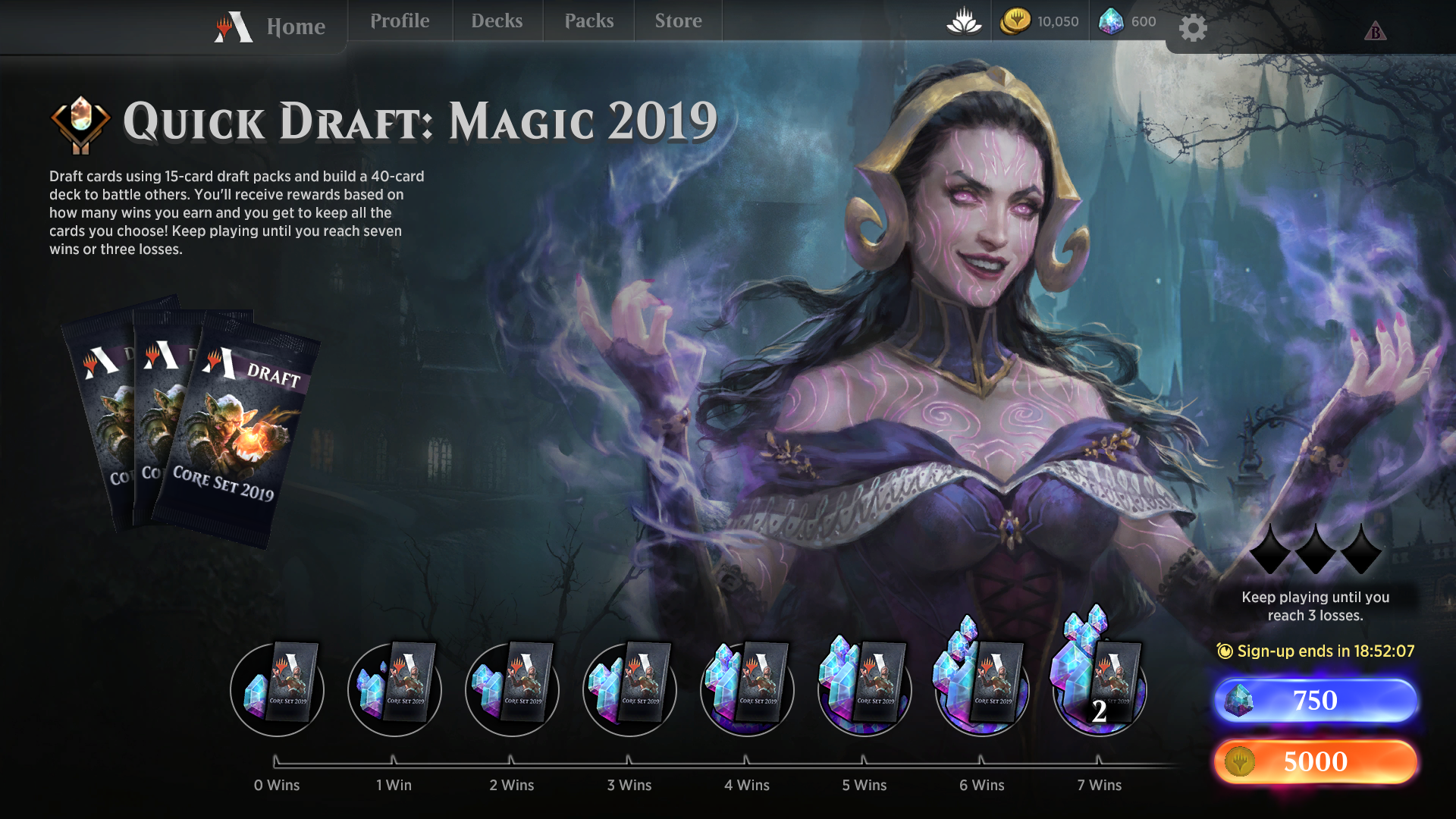 One good thing about the game is that for new players, the automation of most mechanics makes it a lot easier to learn. The game automatically creates the "stack" of cards to resolve and it makes it much easier to track things. In the physical card game, when people start throwing around instants back and forth, it can be difficult to track, but the game does it all for you and triggers all the effects that are required and asks you for those that are conditional. This is by far the most helpful feature in the game because it makes it a lot easier to follow than with the physical card game.

But, the game already has numerous problems. First and foremost is the lack of different play modes. Right now, the only mode available is the Standard format, which utilizes only cards from the newest sets. From the very beginning, the game fails to draw upon its history of cards and restricts players to mostly high speed aggressive decks. Matchmaking is also pretty bad with the game seeming to fail to account for both matchmaking rating and deck power in exchange for getting players into the game as quickly as possible. Most matches are absurd stomps one way or the other with almost no one ever being able to make a comeback. There are times when my opponent literally gets me down to 1 life with a aggressive red deck and just suddenly surrenders because they burned through the cards in their hand.

And, one format that is entirely broken is Singleton. This is a game mode that restricts cards to just one copy of each unless the card specifies "A deck can have any number of cards named x" or something along these lines. These cards allow you to bypass this restriction and essentially just cheat the entire format. Each time they have had it, this problem has not been fixed. If this was intentional, then it is just pointless and defeats the purpose of the entire format. There are two cards that I know of that can do this: Rat Colony and Persistent Petitioners.

Second, if you don't win or complete a quest, you don't get anything. There's no incentive to try for a comeback outside of the special drafts where you have to try to get something like 5 wins before you get 3 losses before the rewards are even comparable to what you spent to start the game mode. This is by far the most frustrating part of the game for me. More often than not, I find myself just playing decks and cards I do not like to try to complete daily quests because of poor matchmaking and my terrible win rate. Sure they give you two colors to choose beween for requirements to play a certain amount of colors, but the problem is that I still have to play a deck I generally do not like in order to make any progress in the game and it just feels tedious and boring playing a deck that I hate just so I can earn a few coins towards a booster pack.

The result of this combination is that you have an incentive to push your cards out fast and just pressure your opponent into surrendering as soon as possible so that you are at least credited for the cards played for quests and winning actually comes second. You're better off sending a bunch of flying pirates and birds while zapping your opponent with Lightning Strike and Shock rather than building a smart deck to play. I found green elves/merfolk that search the top of your deck to ramp to lead up to Carnage Tyrant (cannot be targeted, cannot be countered, and has trample) to be very effective too because it forces your opponent to brute force it. This combination also encourage surrendering since there is no reward for losing or playing out a match. There has been some complaints about this, but they have not done anything about it and I doubt they will in the future.

There's the whole "5th card" issue with the vault as well. Since you can only have 4 copies of a card in your deck, the 5th copy gets put into the vault, which can eventually be redeemed for wildcards that can be transformed into other cards. You get wildcards at an okay rate from boosters, but the rate for them in the vault is terrible. You need hundreds of copies of cards just to get a single opening from the vault, making the 5th copy essentially worthless (you need something like 80 mythics last I checked to get it to open). While wildcards are nice to try to combat the RNG factor of collecting cards, without a trade system, opening packs just feels disappointing. The likelihood that you will actually get something useful to you is extremely low. I found it to be so low that opening packs was just to collect wildcards for me, not to actually get the cards I needed because I never expected to draw what I needed from the boosters regardless of how many I actually open.

Magic the Gathering Arena is the best digital version of Magic the Gathering that we have gotten so far. It is much easier to get into because the game automates all of the rule problems that comes with the physical card game. The problem is that unless you play only Standard, this is not the game for you and this is not a good simulator. Cards from before 2018 are not available in this game and it only contains the "mainline blocks." There are a lot of interesting and cool sets that the game skips over like Battlebonds, Ultimate Masters, and the upcoming Modern Horizons. The result is that the game just feels incomplete. The whole point of having the digital game like this is so that you can play the game with others online and without the need for physical cards, but it is very hard to do when your game is missing a majority of the cards from the game's history and will not be getting half of all upcoming cards.