4:55 PM on 11.07.2007 (server time)    0
Resident Evil:Umbrella Chronicles just gain some credibility. I think that all RE fans were disappointed when they heard this game was once planned to play like RE4 on the Wii, but was instead changed to a on-rails shooter. Like a crappy remix of your favorite song, the game looked like a retread of RE0, 1 and 3 but with all the fun extracted. For me this disappointment has slowly eroded, and with today's scan I'm actually quite excited for the games story, as stupid as it may turn out to be.

Like the Metal Gear series, the RE games have a convoluted, silly plot. But again like Metal Gear Solid, after playing the games for the past ten years or so, I can say I'm actually attached to the characters. So seeing Ada return in this "should be dead, but instead looks like she was married to Ike Turner" manner, and knowing that we will finally get an explanation as to how she survived the destruction of Raccoon City, for me that alone makes RE:UC worth the price of admission.

All the same, part of me wants this game to sell like crap so Capcom will see that consumers bought 1 million copies of RE4 on the Wii not because they follow the RE name around like mindless zombies (har har) but because RE4 is an awesome game. I want a RE2 remake for the Wii with the RE4 game engine. That's not going to happen if a RE lightgun game reusing graphics from the Gamecube games outsells the real games in the series. 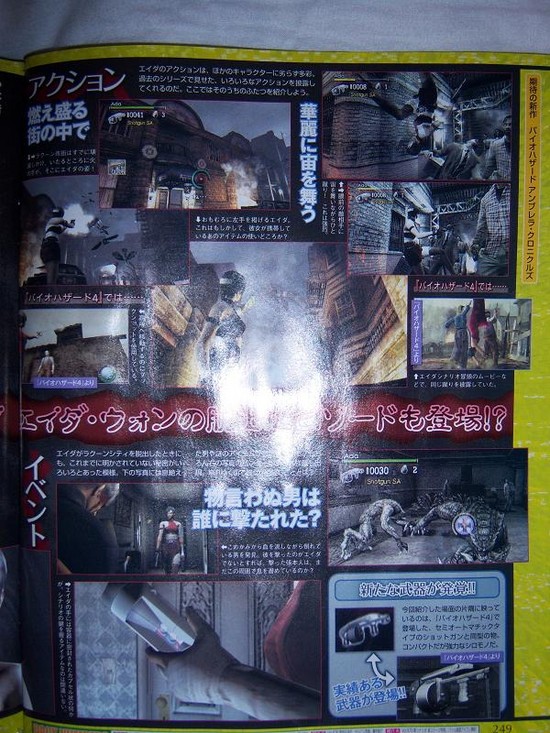