Disclaimer: the term “hidden gem” is usually a good thing. I don’t know if this game counts because, frankly, it’s actually pretty mediocre. Still, I own it, and it isn’t terrible, and when am I ever going to get the chance to talk about it again? So here’s Daredevil on Gameboy Advance.
Daredevil. Matt Murdock. Lawyer by day, blind vigilante by night. He has been my favorite superhero for years. I first took notice of the character when he made a guest appearance on the early 90's Spider-Man cartoon. I didn’t quite understand his powers, but I knew he was one badass muffin. Then, when I was around 12 or 13, the Ben Affleck movie came out, and I loved it. My opinion on that movie has since shifted, but at the time, I was absolutely obsessed with it. That movie sparked a lifelong infatuation with Daredevil that I still nurture to this day.
Daredevil has made playable appearances in plenty of Marvel games, but this is the only one he has based entirely on himself. It was a tie in to the movie, and was supposed to tide fans over until the release of the PS2 game the following year, but that PS2 game ended up cancelled. 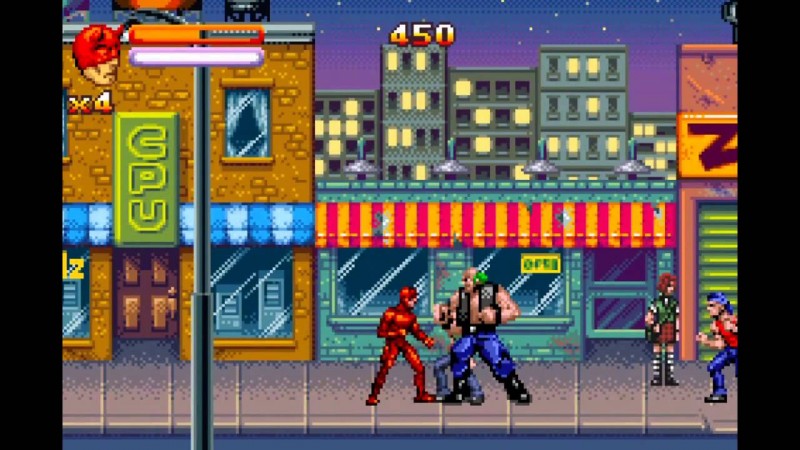 This one is a side scrolling beat-em-up with some mild platforming. The Kingpin has put a hit on Daredevil and now a bunch of villains are out to cash in. You have to get to the bottom of it by moving forward and punching people. It’s a pretty straightforward brawler. You have two attacks and a couple specials, and a jump. You can also activate Daredevil’s radar sense to reveal secret powerups and enemies hiding in the shadows. And that’s about the extent of it. It’s pretty shallow, but otherwise has no major flaws.
They do try to throw in some variety in the level designs. There’s one level where you have to jump across the roofs of cars. There’s a sewer level that has you explore vertically instead of horizontally. So there is a little bit of spice. Mostly, though, the game is just a movie tie-in made to check off of a list of merchandise.
The biggest evidence of that is the selection of villains in the game. Three of them are Elektra, Bullseye, and the Kingpin. Decent choices, but they are the main characters in the movie, and their in-game sprites reflect their movie costumes (though their comic book costumes are unlockable later.) The other bosses are, uh, interesting, to say the least. I know Daredevil doesn’t have the most well known rogue’s gallery out there, but he has his share of arch enemies. Who would you expect to show up in a Daredevil game? Typhoid Mary, Gladiator, The Owl, Mr. Fear, The Purple Man? 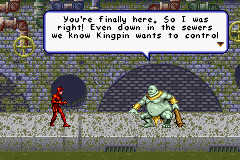 Those are all shoe-ins, right? This game has none of them. But it does have the fat blue guy who lives in the sewer. The one who appeared in one single issue during Frank Miller’s writing tenure. I mean, it was a good issue and important for the plot, but why include that guy in the video game? You might think the developers were being subversive, but then you realize that one of the other bosses is Echo. Now Echo is one of my favorite characters, but at the time, she was brand new. New enough that if somebody walked into a comic book shop the day before starting development and asked for the latest issue, there’s a strong chance that Echo is who they would see inside.
It all adds up to show that the developers didn’t do a whole lot of research on the character. When it comes down to it, the game is just a movie tie-in. If it had been any other character, or if Daredevil had a whole library of games like Spider-Man or Batman, then we wouldn’t even be talking about this.
As a movie tie-in, it’s okay. As a beat-em-up, it’s tolerable. As a Daredevil game, it’s all we have. I guess it’s not a bad game. I do wish somebody would make another Daredevil game, though. Maybe a cross between Arkham City and Spider-Man 2 on PS2. If any game developers are reading this, make it happen. Please? Pretty please? 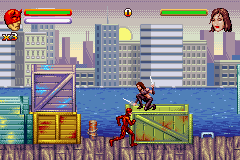 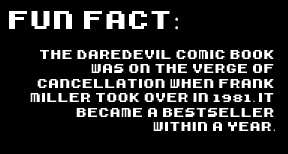