Think back to the scariest moment you’ve ever experienced in a video game. Was it watching that first zombie slowly turn its head to look at you? Re-entering the school you thought you had finished, only to realize that it was now a rusty, gore-filled hellscape? Helplessly standing in a flooded hallway as an invisible monster splashes toward you? All of those things left an impression on me as well, but none of them hold a candle to this game.
When I was a little kid, my friend David owned a disc-based edutainment system called VIS. The best way I can describe it is as a knock-off of the CD-I. Now if that sounds like puking on a pile of shit, as the Nerd would say, then you’re correct. I would beg him to play this thing when I went to his house, because it was such a novelty, despite the quality of the thing. The games were exactly as terrible as you would expect.
Until we popped in The Secrets of Hosea Freeman, and were greeted with this:
Oh, golly good goodness. I couldn’t even. I don’t know what it was. The narrator’s spooky voice, that dissonant piano track, the bizarre system itself oozing a sinister malevolence, I don’t know. But that intro sequence frightened the dickens out of me. I already had a phobia of ghosts and stuff already, thanks to some of the shows my dad would watch on TV when I was little. This game had me convinced that any day now, a specter was going to pop up in any given reflective surface and eat my soul. That’s why I remember this game so well all these years later. It’s one thing for a game to give you a spook while you’re playing it. It’s another to leave you with night terrors well after you’ve put the controller down.
So what exactly is this haunt all about, anyway? It’s a point-and-click edutainment game designed to teach you about whaling. The guy in the mirror is the ghost of Hosea Freeman, a whaler who used to own your house. He will give you riddles describing a piece of furniture or something. You then “go find” that thing that you think he’s describing (by which I mean, flip through photos of rooms and click on it.) If you got it right, you will be shown an item associated with sailing or boating or whatever, then get a lesson on what it was. Get it wrong and your real-life soul is banished to the deepest layer of Hell, where you are forced to stand up to your neck in liquefied whale guts while pirates stab your head with harpoons. Just kidding. I hope.
Despite being so scared of it, I also loved this game. I fancied myself a smart kid and liked trying to interpret the riddles. Combined with the creepy atmosphere and it all led to a bile fascination that has stuck with me for decades.
I wish I could recommend this game to you, but the truth is, I don’t know how you’d play it. I’ve kept an eye on eBay for years hoping to snag an affordable VIS, and it never shows up. The console is so obscure that if any emulators even exist, I haven’t been able to find them. Looks like the only way to try this game is by being very rich or very lucky. If you can come up with another way to play it, please let me know. I would love to go back and set this spirit to rest. 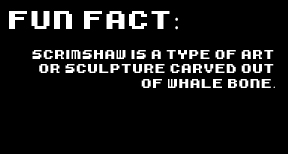