The Sega Game Gear is a system that gets a bad rap. Even though it was innovative at the time of its conception, retrospect has not been kind to it. It usually get regarded as a flop, with gamers pointing to its bulky design and absurd battery life (six AA’s for about four hours of play time!) as its biggest flaws.
My parents got me one when I was very little, before my siblings were old enough to interfere with me being spoiled. It was used and came with three games: Sonic the Hedgehog 2, a baseball game, and this one, The Lucky Dime Caper Starring Donald Duck. It never had the staying power to me that the NES had, and my eventual Gameboy would beat it out as my go-to handheld, but I have a deep rooted respect for the Game Gear. It gave me some good times with some good games, like this one.
The Lucky Dime Caper Starring Donald Duck, or TLDCSDD for short, is an adventuring style platform game. It takes some plot cues from the Ducktales cartoon. Magica DeSpell has kidnapped Huey, Dewey, and Louie, and also stolen Uncle Scrooge McDuck’s lucky dime. Now Donald has to travel the world and save the day. 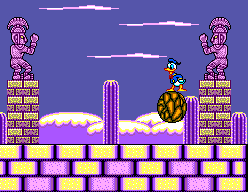 It’s a bright and colorful game with a catchy soundtrack and that early Sega sprite work that drives me wild. Donald’s animations are amazing. There has always been something about Game Gear graphics that hits a tender spot in my heart. I love looking at them. Part of the game’s schtick is that Donald travels to different locations around the world to battle Magica’s forces, and this really shows as well. Every level is unique in its scenery and structure.
Something fun to point out is that Donald Duck’s main method of attack in this game is a hammer. It’s kind of funny knowing that his biggest future gaming appearance would feature him as a powerful wizard. Here he just smashes the crap out of everything via brute force. 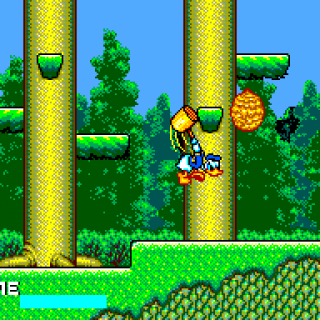 If there are any flaws to speak of, it would be one that many Game Gear games had, and a lot of handheld consoles in general. The small screen means that your view is zoomed in on the player character. This can make it hard to see things around you, as your field of view is very limited. Enemies can come out of nowhere, and sometimes you have to take a chance on a jump without knowing exactly where the landing is.
The Lucky Dime Caper is not nearly as bad in this regard as the aforementioned Sonic the Hedgehog 2 (seriously, the first boss is almost impossible and only beatable by sheer luck) but the issue does crop up from time to time. As a kid, I played this game enough that I pretty much memorized everything and didn’t notice it as much. Going back as an adult, there are some parts that feel a bit unfair based just on the hardware limitations.
That doesn’t stop this game from being good. It’s a hidden gem of a game on an oft-forgotten system. If the Game Gear is something you’ve ever been interested in, this is a good game to try out for it. It’s also worth noting that it was released on the Master System with only minimal differences. While I haven’t played that one myself, it might be worth looking in to if the Master System is something you have available to you. 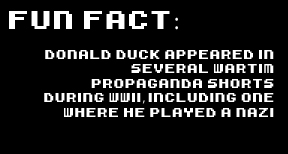