In the late 80's and early 90's, Capcom released a handful of Disney licensed games for the NES. The most popular, by a landslide, was Ducktales. Starring Uncle Scrooge McDuck searching the world for treasure, even on the moon. Another one was based on one of my favorite cartoons: Darkwing Duck. That is a Megaman-like game that I have only had the chance to play a couple times. I loved it and yearn for a chance to play it again some day, though my lack of experience with it keeps me from writing about it with more depth.
That brings us to Chip and Dale Rescue Rangers. This game came into my life relatively recently. I got it from my job at the town dump and decided to give it a chance, not expecting much. Once I popped it in, I couldn’t stop. It’s an action platformer with a coop mode where you jump and dodge to get to the end of the level. There’s a selection of objects laying around that you can pick up and throw to dispatch foes. It even has some minor puzzle solving, like turning off faucets to get through a sink section.
I haven’t actually beaten the game yet, though the overworld map that allows you to select what order to play the levels has allowed me to see most of them. It’s a fun little game that is easy to have a good time with. That fact that I can play it for the first time almost thirty years after it was made and still be able to say that is a very strong indication o f how well it has aged. If you like retro games, and especially if you have a friend that you can do some coop with, then consider giving Chip and Dale Rescue Rangers on NES a shot. 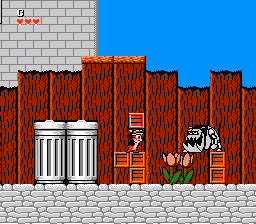 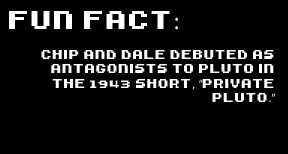