Horizon Zero Dawn Is Good, but It's Not for Me

Horizon Zero Dawn received a lot of hype when it released back in 2017. When I finally got around to playing it for myself, I was expecting to become completely absorbed in the game. Instead, I was left with the realization that I despise the current formula for open-world RPGs.

One of the things I've always liked about PlayStation is that their consoles don't contain a single flagship game. PlayStation has had many mascots over the years: Crash Bandicoot, Gabriel Logan, Spyro, Sweet Tooth, and many others. In the months following Horizon's release, one could argue that Aloy was the PS4's mascot, and Horizon Zero Dawn was the PS4's flagship game. As I got deeper into the game, I found myself increasingly bogged down by its open-world formula, and as a PlayStation fan, I didn't want one of my favorite console brands to be so closely associated with this game. 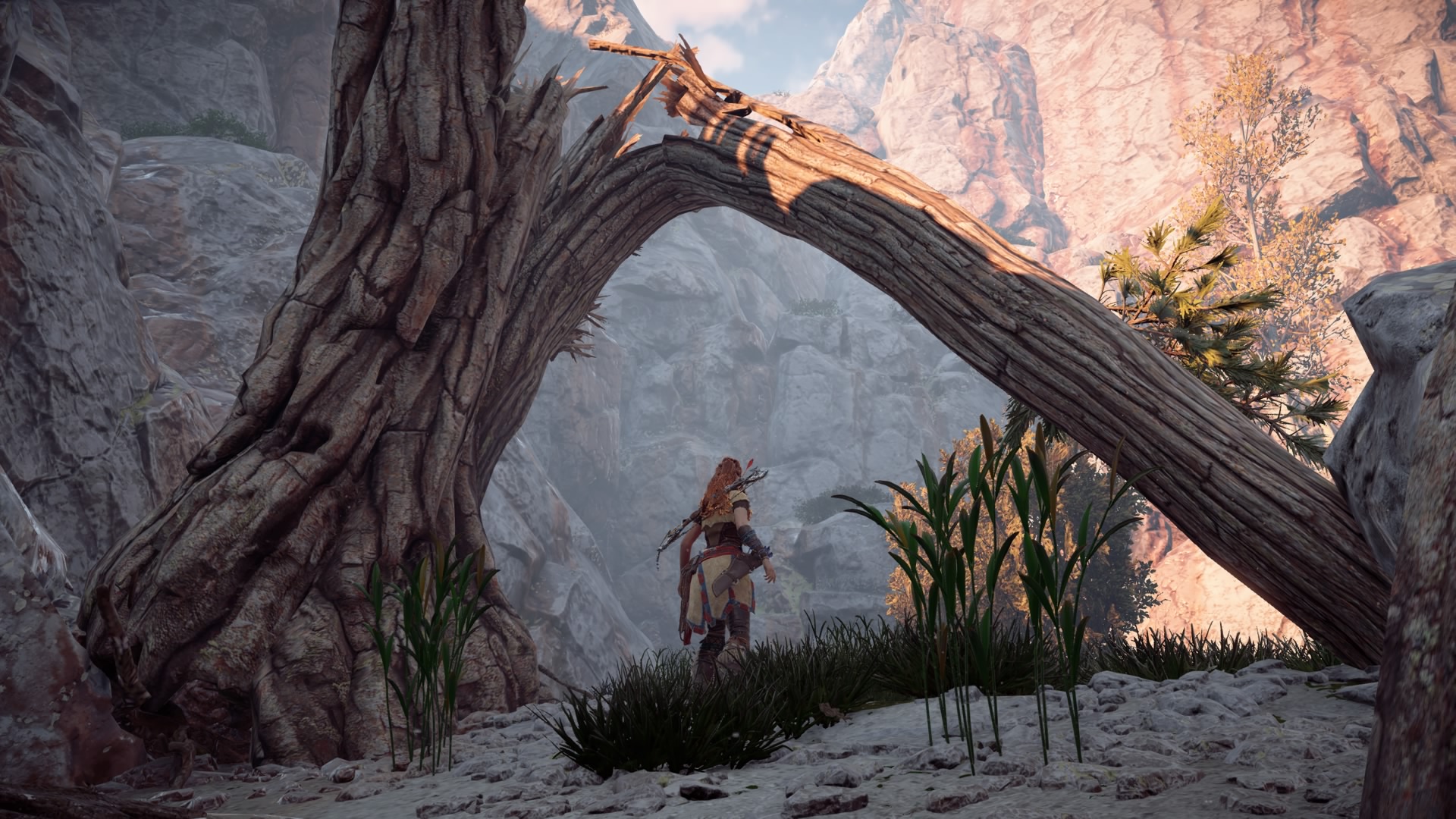 A few months before Horizon launched, a customer where I work pulled me aside to show me some gameplay footage. What I saw was memorable: a lush and detailed world, with a protagonist dressed in tribal gear, fighting a giant mech-dinosaur hybrid. The early gameplay footage really stuck with me. 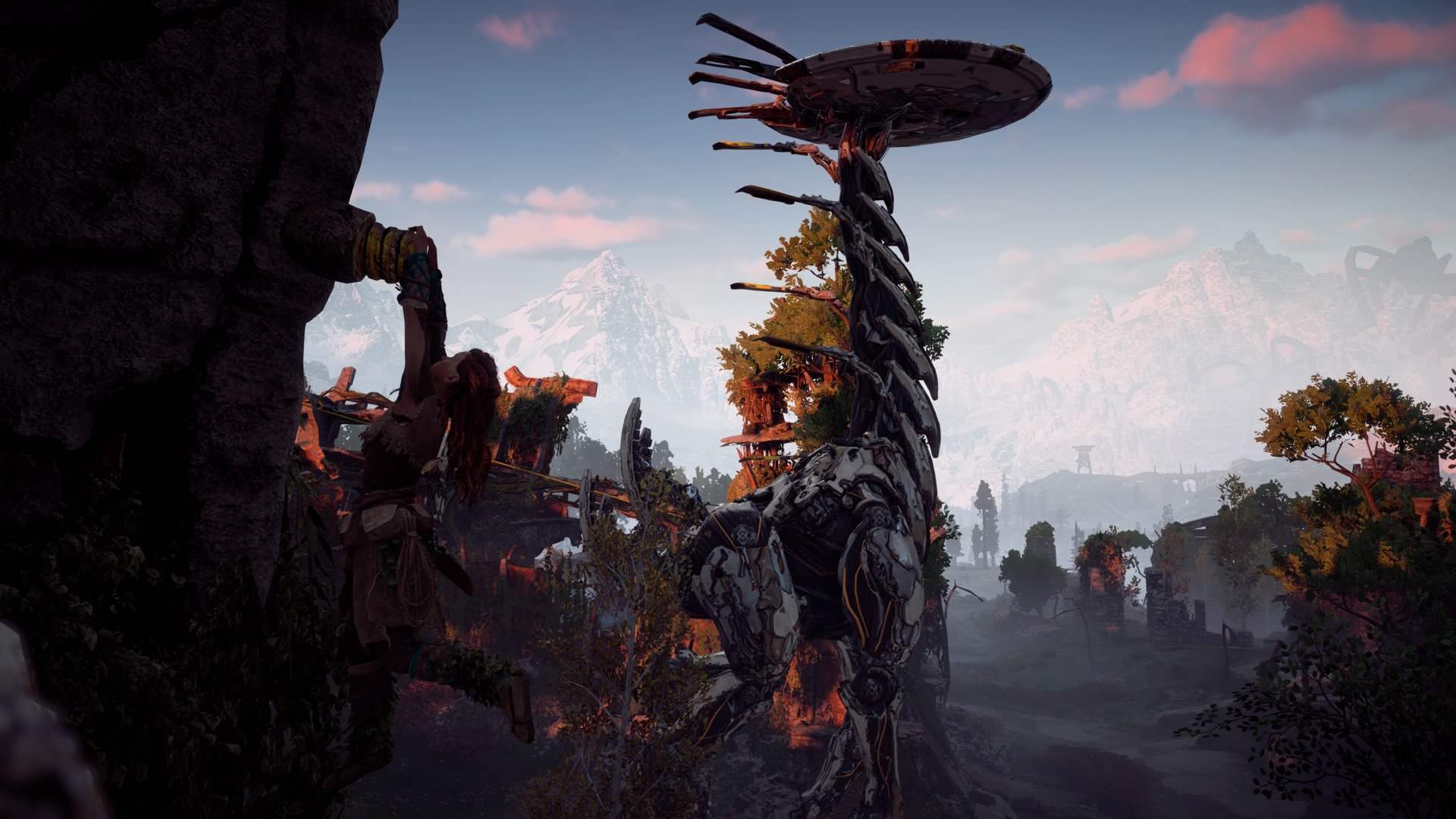 Horizon is by no means a bad game. I don't regret playing it, but it is not a perfect game, and there are problems with the game's core design that really hold it back from reaching its true potential. Before I get into the bad, I want to talk about the good.

The graphics, by and large, are the best part of the game. If it weren't for the graphical display that I first saw, I don't think that Aloy and her slick combat moves would stayed with me. But it's right here where the game's perfection ends and some of its problems begin.

The combat was the next best part of the game, and there were gameplay moments that have stayed with me. I had so much fun sneaking up on the bandit camps, and using stealth in order to snipe the guards before they noticed my location. Similarly, the part of the game where the player returns to the Nora homeland to fight through the mass of Corruptors and Shadow Carja was simply memorable. Also, the addition of a weapon like the ropecaster will remain for me as the single most memorable thing about the combat system. If there is any one thing that will make me want to play Horizon again, it's the thought of battling a giant mech while using my ropecaster to slow it down, then widdling its health away. This was such an awesome combat mechanic that I definitely want to experience again. 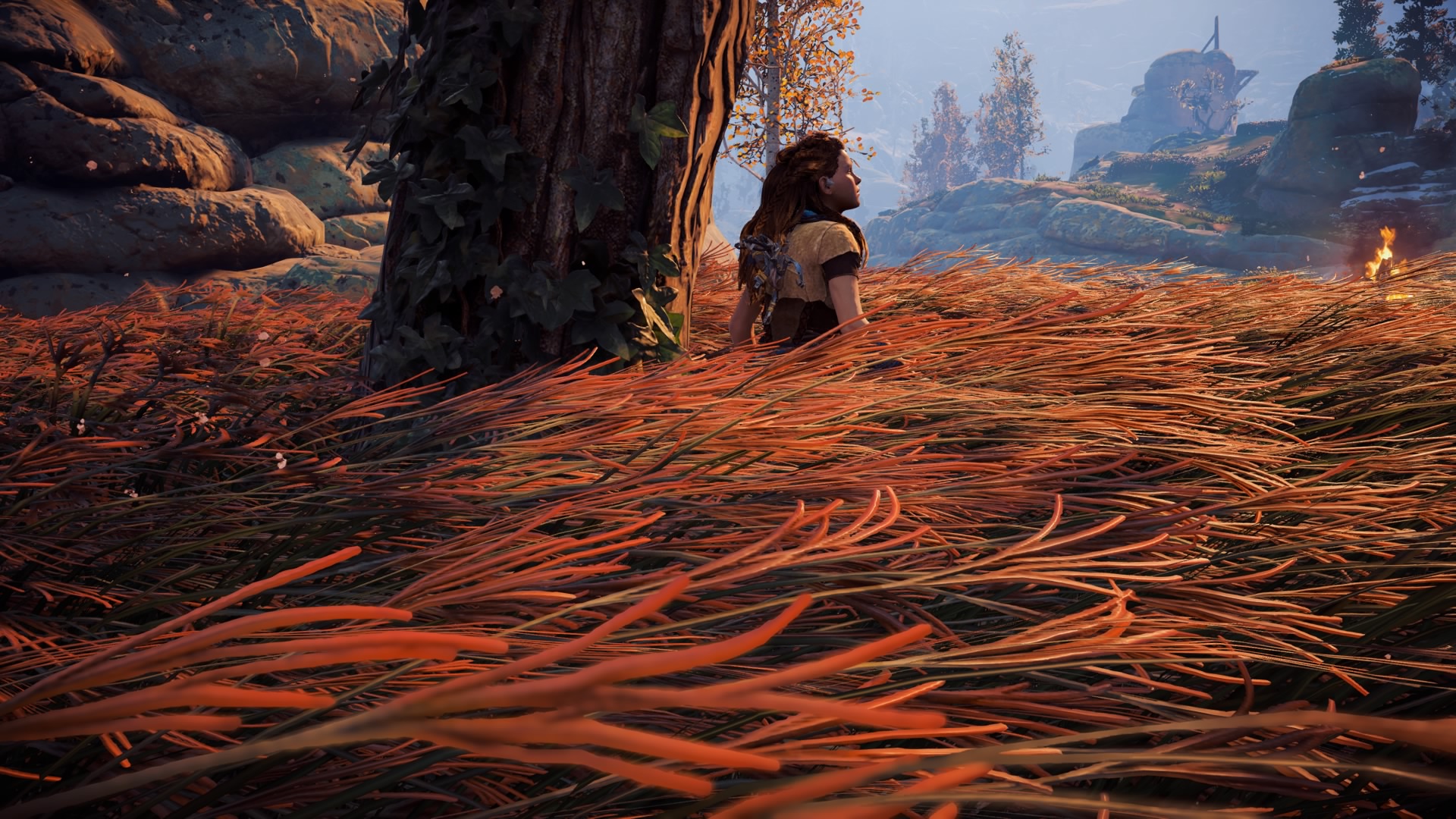 Everything else about the game was lackluster, not least of all the story, which started off somewhat interesting but became more outlandish as the game progressed. The game wears its religious and cult influence proudly, but the thought of a cult worshipping an AI that is so clearly connected with the very dinosaurs that plague that world was simply not believable. The only thing that made it mildly believeable was the idea that the Nora were incredibly, well, stupid. Even Aloy is aware that The High Matriarchs are foolish because she subtly mocks them with her brash, rebelious attitude.

My issues with the story are relatively minor. However, the single biggest problem with this game was its core design, which I would call a loot-fest RPG that distracts from itself to the point of tedium. How can I enjoy the beautiful scenery if the game constantly bombards me with icons representing the near infinite amount of items that I have to pick up off the ground? The sheer amount of fatigue I experienced while looting after battles is mind-boggling.

This leads me to believe that if this game were to really succeed, it should not have been a RPG at all, but rather a straightforward action game in the spirit of something like Devil May Cry, Darksiders, or Onimusha. This is where my analysis of the game becomes less objective and more a matter of personal taste, which is why I chose to title this blog the way I did. I will admit that HZD is a decent game. But the fact that it piggy-backs upon the formula taken by other open world RPGs, which contain too many gameplay elements that are shallow copies of other open world RPGs in how they bombard players with content that is repetitive and unchallenging, leads me to believe that more of today's high-budget RPGs are distracting the developers from what is important: creating a fun gameplay experience.

I really think that Horizon is just yet another iteration of the open world RPG formula but with a different skin applied. One of my best friends, himself a long time gamer, sometimes cracks the joke that all first person shooters are really the same game, and each new FPS is just a DLC of that very game. This is what Horizon felt like to me: a reimagining of an open-world formula that has been the major trend in video games over the last few years, but doesn't really offer anything interesting. 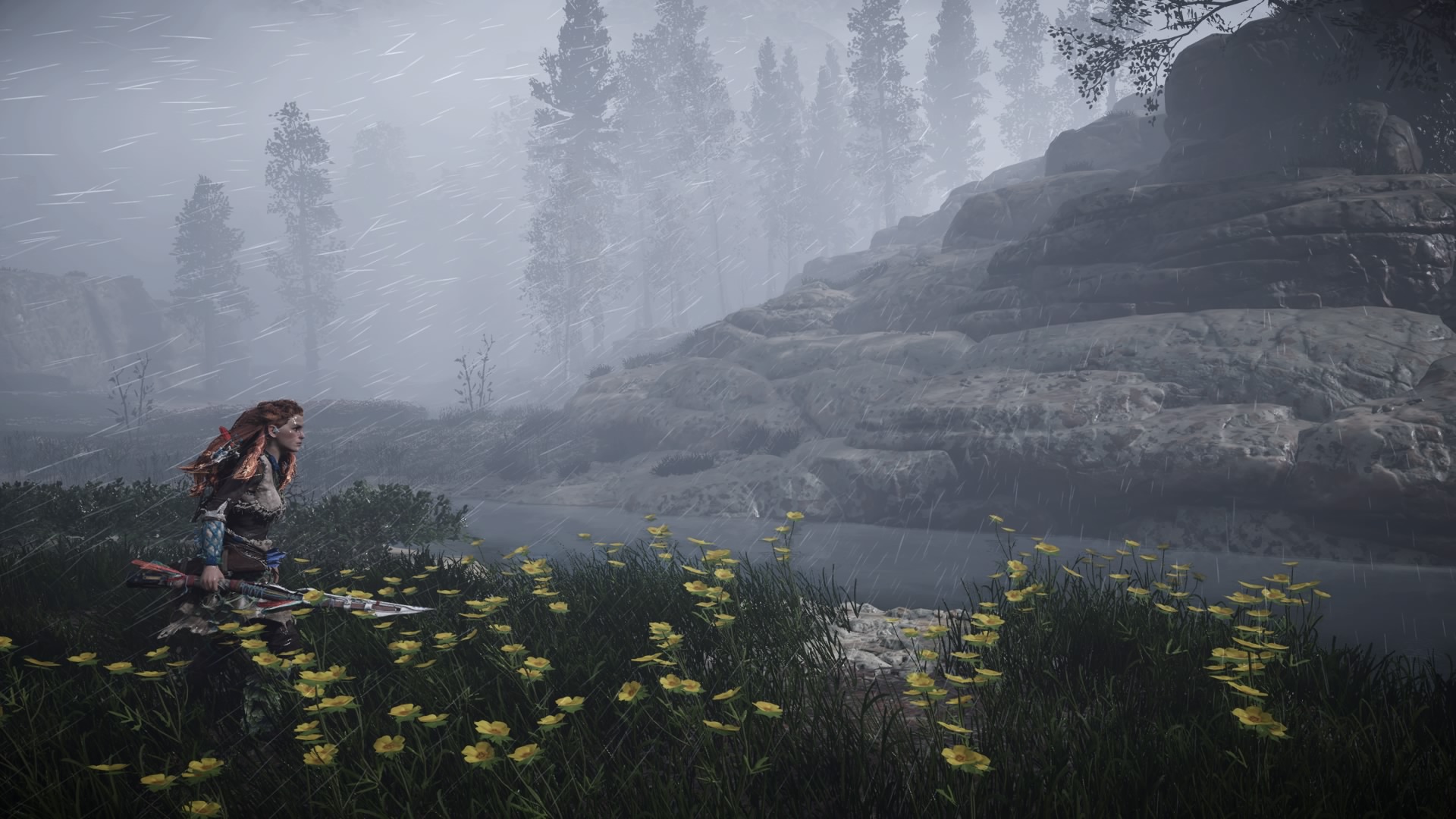 Horizon's RPG mechanics posed more problems when what they should have done was added to the core gameplay experience. One major example is the weapons. I mentioned earlier how much I loved the ropecaster, so much so that I believe it will be the one thing that makes me want to play the game again. On the flip side, the variety of weapons was too much for what they really offered. The blast sling and the normal sling could have been consolidated into a single sling with varying ammo type. The same goes for the different bows. This would allow the weapon wheel to contain only four weapons: bow (rangeed weapon) sling (grenade type weapon) ropecaster (defensive weapon design to slow the enemy) and tripcaster (trap weapon). A second variation might add the rattler as the fifth weapon so that the game contains a true close range weapon.

Quest markers, quest logs, waypoints, icons indicating loot on the ground, icons above NPCs heads indicating they need your help with something, constant looting after every battle to ensure that you have the right amount of resources to craft your weapon -- the only thing I experience from all of these things is exhaustion. Remember older games when you would simply run over the loot for your character to pick it up? Simple. Recall playing a game where crafting was actually meaningful? I would use Dying Light as one example of this, but there are many others.

Yes, Horizon meets its own checklist for all of the gameplay elements that gamers find interesting: sidequests, loot, "cool" story, crafting, skill trees, additional content in the form of DLC for all those who loved the game and wish to experience more of it, and best of all, a huge open world for you to spend a lot of your time in. Unfortunately, its iterations of the items on this checklist are shallow, and a tighter focus would have helped this game go a long way. Instead, it falls short of itself, and for my own money, it does not live up to the hype that it receieved. 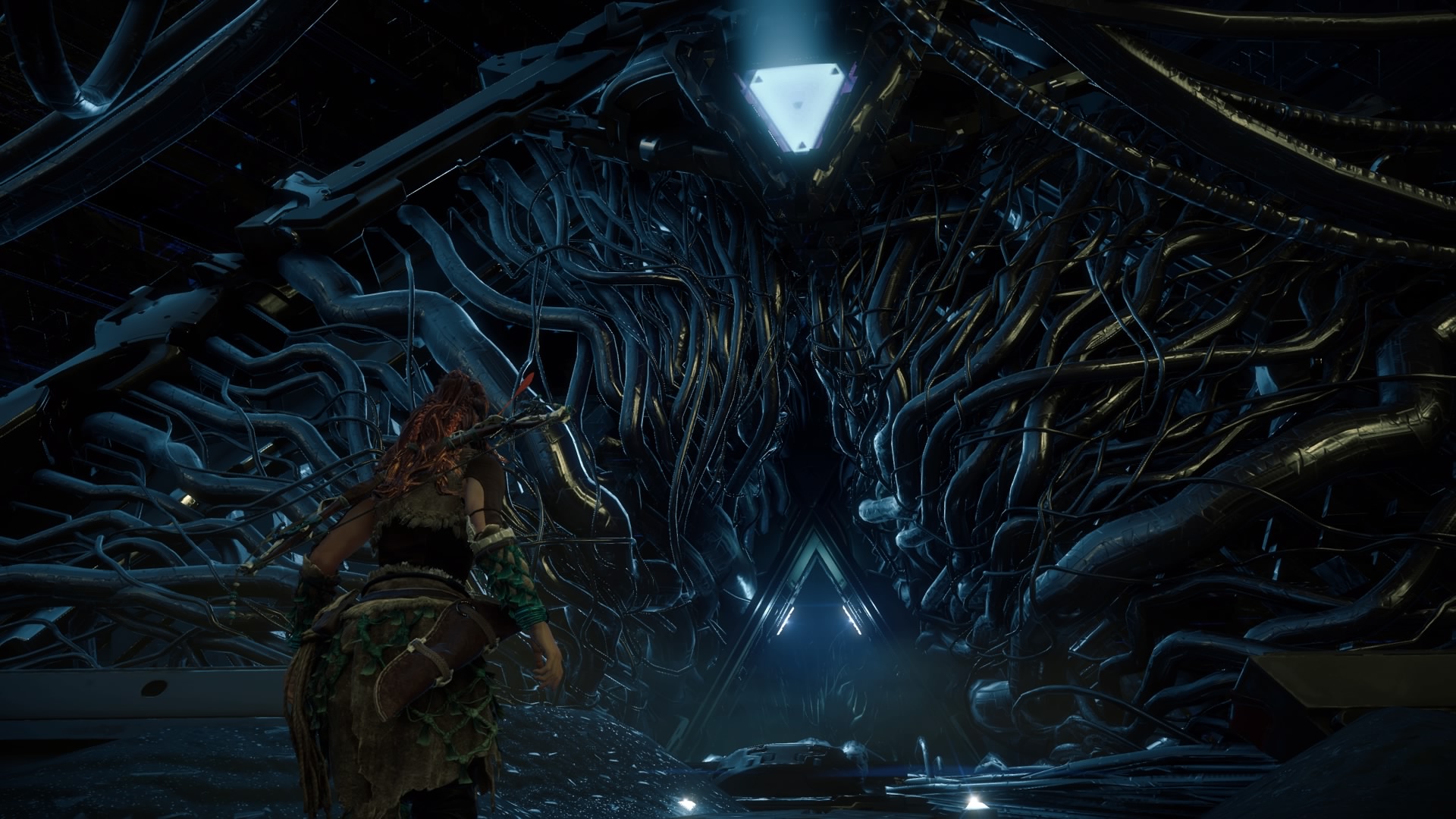