It seems redundant by now, but again, apologies for posting it pretty late at Halloween.

Recap of the older Waifuween movies can be traced back to this link.
Recap of Waifuween W20: 20 Years Later & Waifuween Resurrection here. 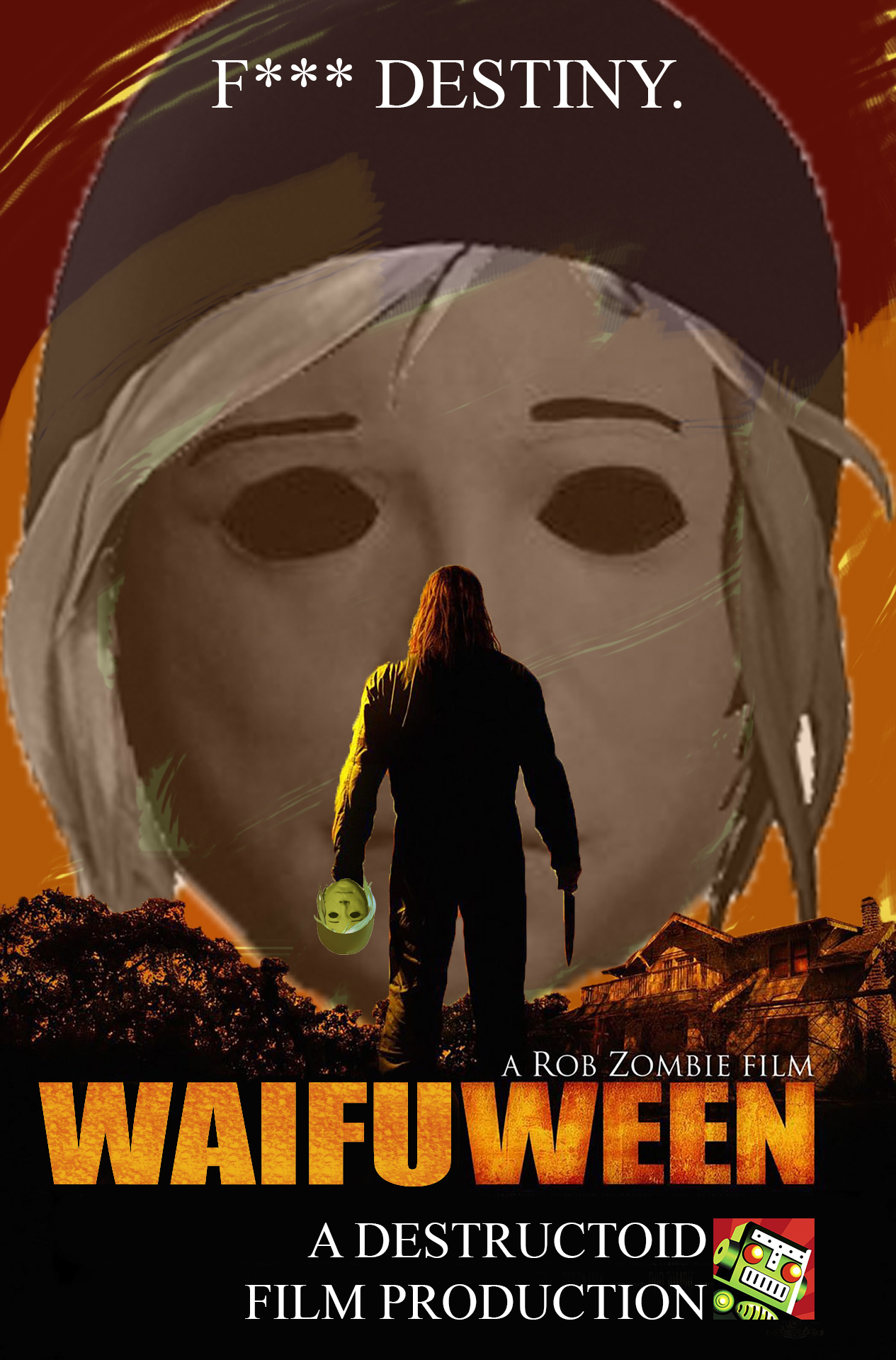 While the previous films depicted Angie22 as purely evil reincarnate, the reboot attempts to explore her childhood and how the following events makes her the terrible person she is today.

Yep, typical crappy childhood background. But I'm sure school would be different for her.

Huh, not ideal either. But wait, who was that in the next GIF?

Hey, orochileona (Chris Moyse) is back! And yes, while his original might have ended with Donald Pleasence, I still think he's worthy enough to assume as Malcolm McDowell.

Good man, good man. And now we fast-forward to Waifuween itself.

Understandably, Angie can't take her stepfather's insults any longer, and decided to take her first step to fame and recognition darkness.

After her first kill, she was then sent to the Blue Sky Sanitarium for her crime, and taken under the care of Dr. orochileona.

Initially, things were going well thanks to both orochileona and her mother Seymour guiding her towards the light, until one day when a nurse was alone with him.

After that unfortunate incident...

Instead of staying strong and keep on guiding Angie, Seymour decided to defend the honor of her waifu by committed suicide. Time flies by, and after 15 years later, orochileona had one last meeting with Angie before moving on.

The following day, on his presentation at a local campus. 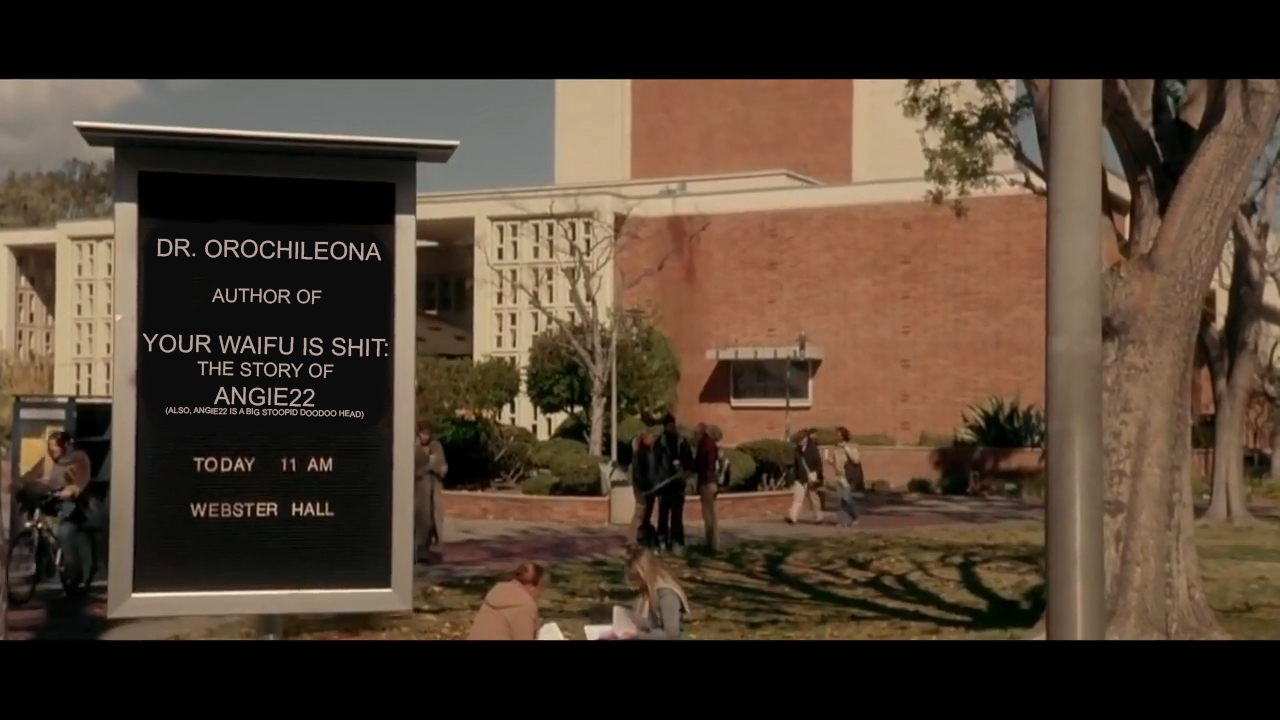 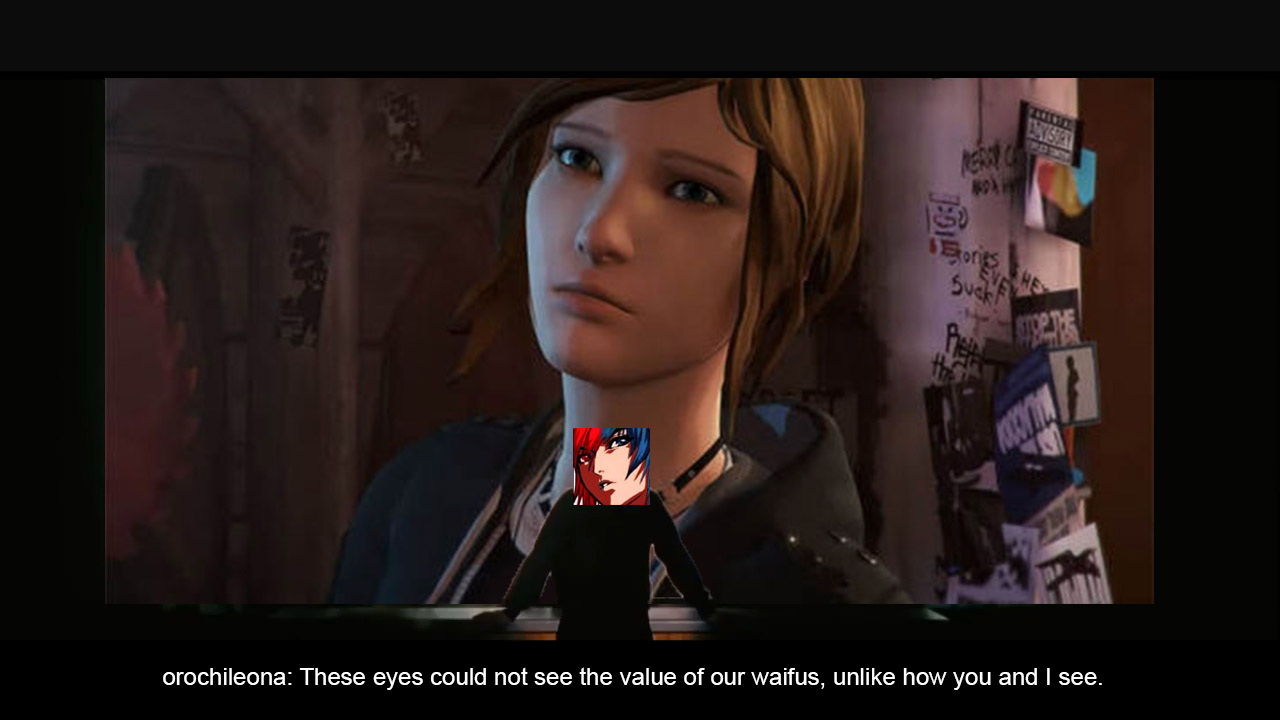 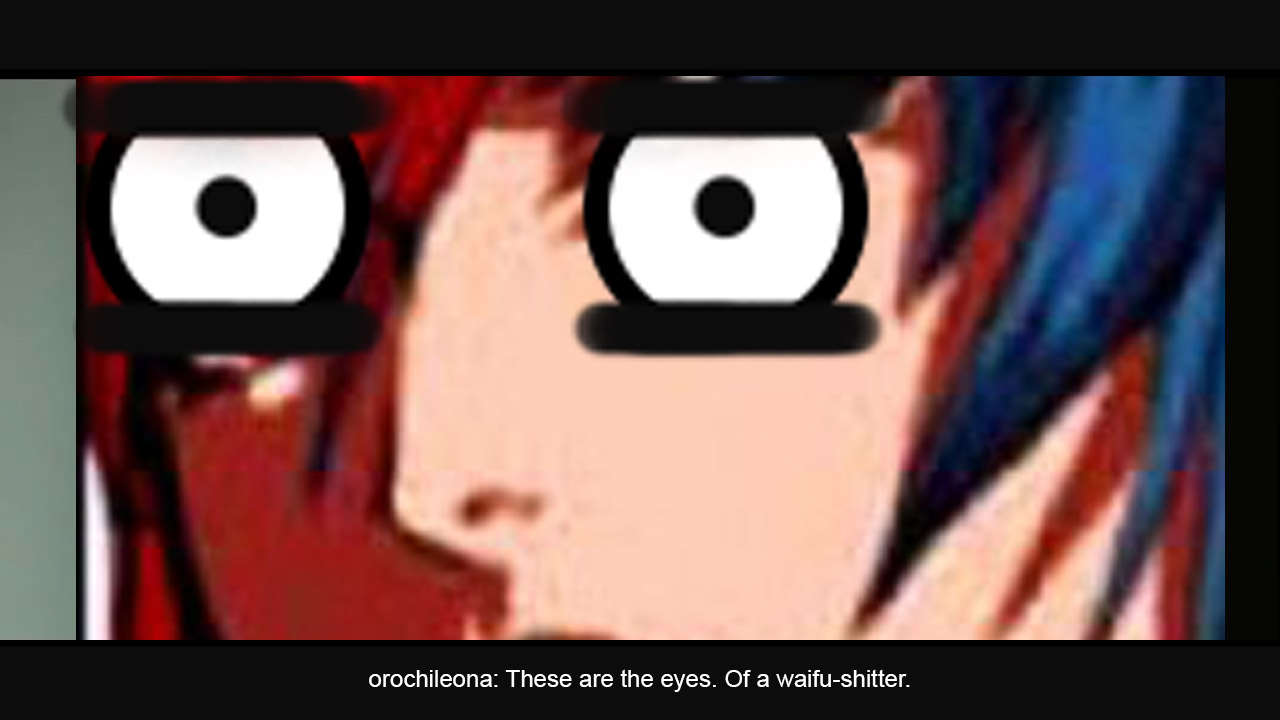 Back at the sanitarium at October 30th, idiots are bound to unleashed chaos in ways you pretty much could imagined.

Angie escaped! And she ran to a nearby workshop and found her next target.

Shen then followed him to the toilet, and decided to act rude to him. 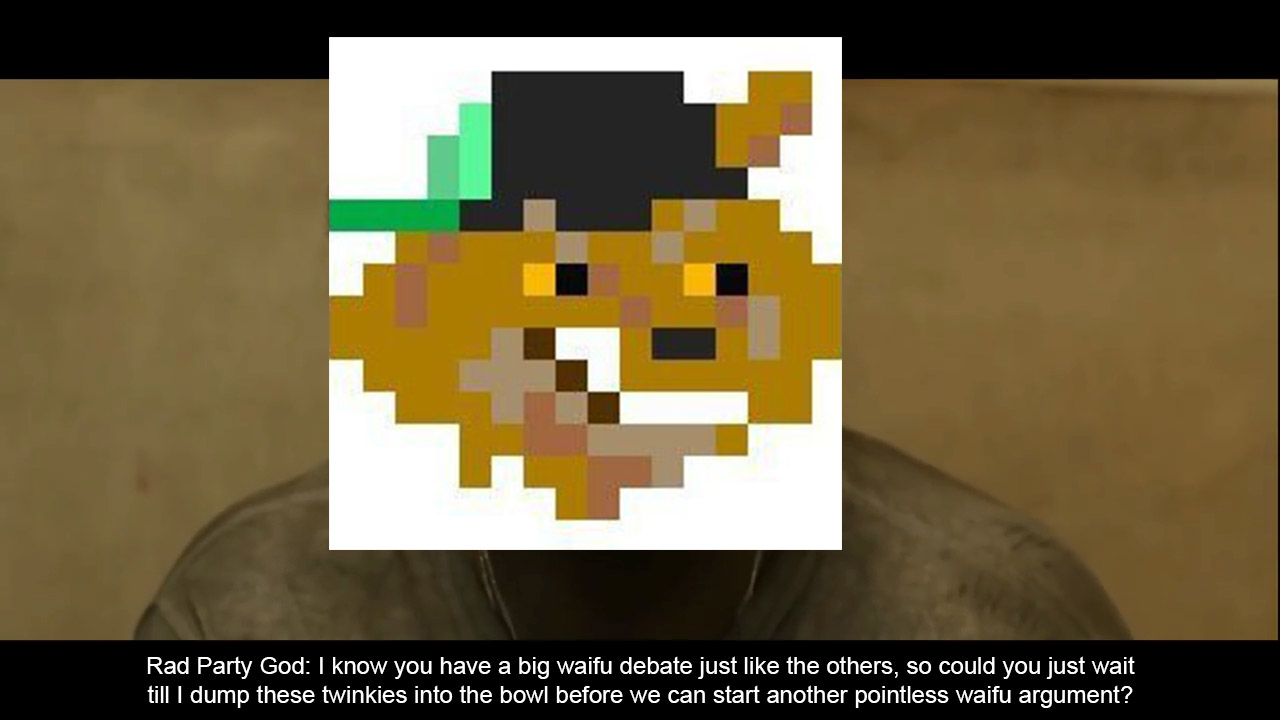 Rad Party God was normally a kind, if brash guy. It's just that Angie was the first person to be uncouth to him in a long time, so Rad decided to return the favor for a nice change in a while.

And it's that action that cost him dearly.

Worst of all, he never even get an onscreen death. Angie then return to her old house to gear up and have a rest.

And at the next day, at Waifuween.

Yep, Wilfoftheblues take over the role that homeoftheblues had back then, as a promise from me. Sadly, her role this time is cut short due to my own laziness, rushed production and "time constraints". Take your pick.

Meanwhile, orochileona went to the local school to warn everyone of the imminent danger.

After his warnings were fallen off deaf ears, orochileona decided to take matters on his own hands.

At night, after a few deaths around the neighbourhood, Angie finally came for Wilfoftheblues.

As Angie were about to meet her end, the good doctor appeared.

And then Angie knock orochileona out unconscious, and took his lunch money. After a few struggles with Wilfoftheblues, here comes the conclusion of this epic battle.

Oops. Well, next sequel, then! 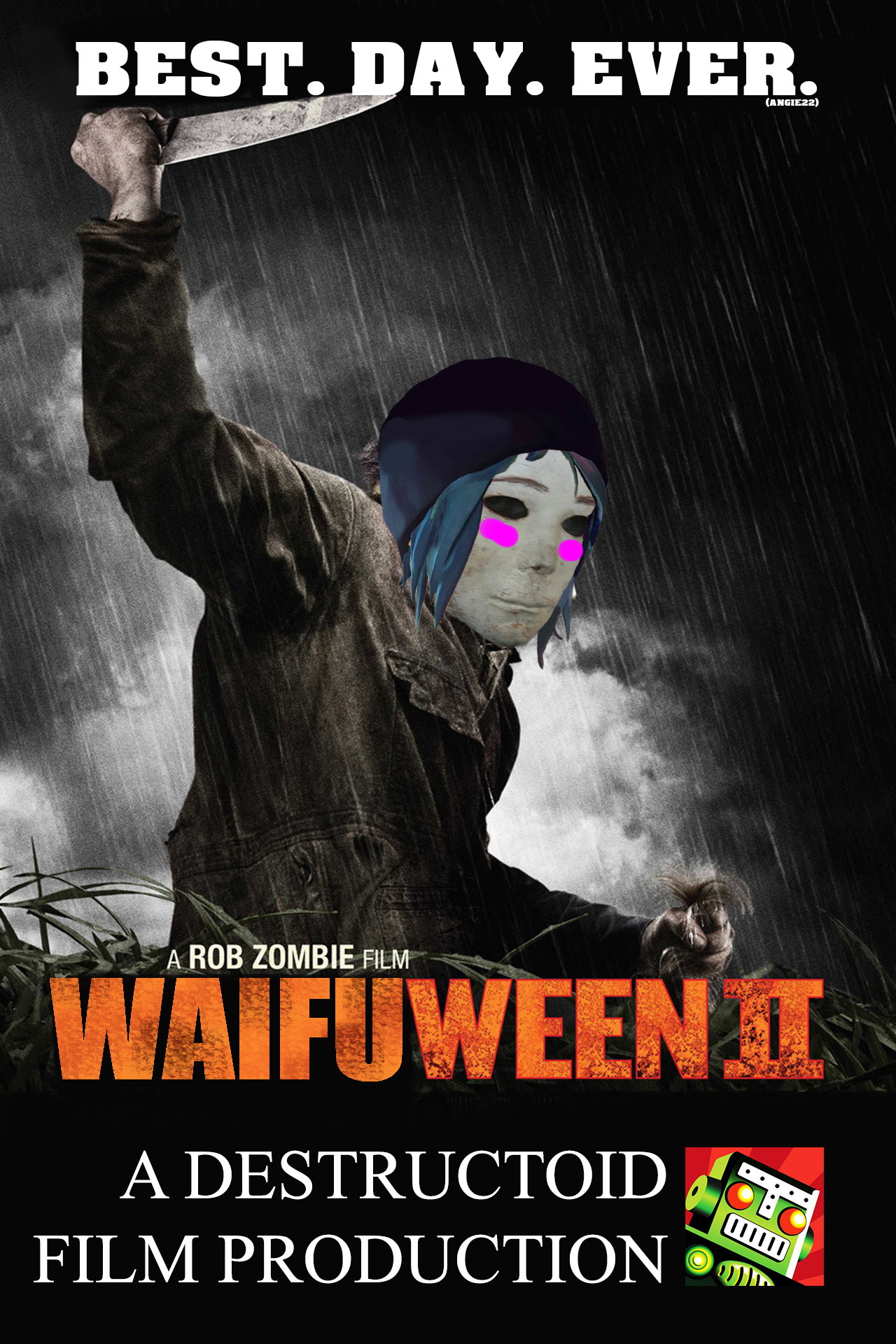 The sypnosis? After the true events depicted on the ending DLC, the surviving victims tried to move on after the horrific event last year, while orochileona tried to cash in on his pain and suffering with his new books. Meanwhile, Angie is still alive somewhere, and bad acid trippin' occurs around the movie.

So if you're noticing that the content quality were even worse than the last post, it means that I'm really out of ideas, and thus I've decided to end all future Waifuween projects from now on. Will I do another GIF posts on other movies? Maybe, preferably after I got my own shit in place.

In short of words now, but again, thank you for enjoying this post, and of course, Happy Halloween to everyone at Destructoid!

Also, all original footages for the Waifuween (2007) parody were taken from this video.