Guardian’s Crusade is one of my favorite games of all time. Easily in my top ten. I have played through it dozens of times, most recently just a couple months ago, and it never ceases to entertain me. This game never gets old.
It actually started with a magazine. I was cruising GameFAQs one day in the late nineties and saw an advertisement for a free sample issue of Next Generation magazine. My friend David was subscribed to a gaming magazine (I believe it was Tips & Tricks) and I had wanted one too, so I asked my mom if I could sign up for the one free issue. Something must have gone wrong somewhere along the line (I likely misread the ad) and got a bill in the mail soon after for my subscription. I was confused, and my mom said that if I wanted it, I had to pay for it myself.
I was kind of reluctant. I didn't get much of an allowance as a kid, and would have rather spent my twenty bucks on an actual game rather than a game magazine, but I went for it. My first issue was number 50, featuring Final Fantasy VIII's Squal on the cover. It was not at all what I expected. Rather than cheat codes like most magazines, it was more of an industry trade journal, the type of thing I would gobble up nowadays but didn't really understand as a kid. It was still cool to have it, though, and I would thumb through each new issue looking at the picture, even if I didn't understand the articles.
I really loved the original Legend of Zelda as a kid. When my parents replaced our old NES with a PS1, my love for the new console blinded me to missing my old one too much. That said, I never got over my lost Zelda and the missed opportunity to play the new one on N64, so I started looking for substitutes. Link's Awakening on Game Boy would help a lot, but I wanted a console experience. The answer to my prayers seemed to come one day when I was flipping through an issue of NexGen and saw a preview of Guardian's Crusade. 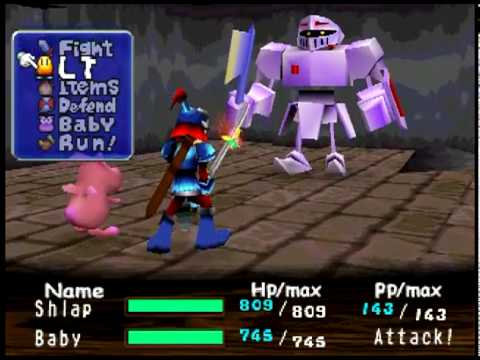 The screenshots showed a knight in a fantasy environment, wielding a sword against monsters. The camera angles were even reminiscent of Ocarina of Time. Had I paid more attention to the article and understood the genre a little more, I may have realized that it was nothing like Zelda, but I didn't care at the time. Those pictures cemented it in my mind as essentially Zelda on the PS1, and it became one of my most anticipated games ever. My friend David even tried to correct me, but I wasn't hearing it. This was to be my dream come true.
My first time playing was actually a rental. For such a small-name game, that was an odd thing to see, but I jumped at the opportunity. As fate would have it, soon after renting, I got sick and had to stay home from school. I swear I was actually sick, not faking (although that is absolutely something I would have done back then) and got to spend a whole day playing the game. It quickly became apparent that, like David said, it was nothing like Zelda at all, at least from a gameplay perspective. That didn't stop me from enjoying it, though. It was different from what I expected, but it still lived up to my expectations in every way. By the time I had to return the game to the store, I was hooked.
I remember the buying process well. I remember looking for it at Wal Mart and at Toys R Us, even asking a store associate. I was such a shy kid that I never would have asked for help from an employee, even if I needed it, so to have a conversation with one about finding a game meant that I was hard core serious. I saved up my money, and had my parents take me to the mall one day to get it. I was absolutely determined to buy that game, and when I walked into Electronics Boutique that day (eventually it would become EB Games, then Gamestop, before finally closing a couple years ago) I felt like a boxer heading to the ring to win the championship. I sifted through the shelves for what seemed like hours, with a growing sense of desperation, a dread that they might not actually have it. As I was looking through one last shelf, on the verge of heartbreak, my mom walked up, pushed aside a couple games, and found it. It must have been the only copy in the store, hidden behind a bunch of other indifferent titles.
I remember her saying on the car ride home that if we hadn't found it, it would have been a somber return trip. I think I was old enough not to have thrown a fit, but she was right. I would have been severely disappointed. Fortunately, that wasn't the case. I was happier than a bee in an allergen lab. I finally owned the game of my dreams. I picked up right where I left off on the rental, and it became one of my favorite games ever. 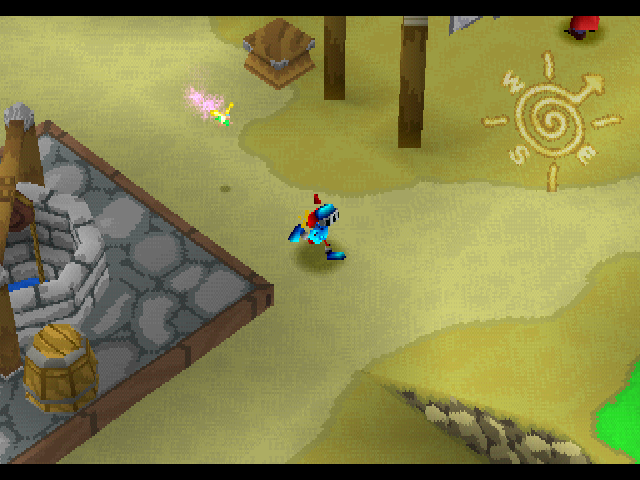 Guardian's Crusade is an excellent JRPG. And while it is a J RPG, it's story, setting, and structure are far more western/medieval. It is kind of cliche in a lot of ways, unique in a lot of others, and entertaining all the way around.
As a small town knight (default name: Knight) accompanied by your fairy friend, you go on a routine errand one day, only to discover a lost baby monster (default name: Baby). Upon taking him in, you receive a spiritual vision from a rabbit man instructing you to take the baby to its mother in God's Tower, a massive ruin on the other side of the world. Naturally, this is followed by a chain of events that get Knight lost and separated from his home. With nothing better to do at this point anyway, Knight ventures onward to heed the spirits and take the Baby to its destiny.
Along the way, you meet up with an impressive cast of characters who each have seemingly unrelated roles, yet somehow intertwine with your own quest. A renegade mercenary, a yellow walrus girl, a traveling outlaw, a mysterious cult, and a group of royal crusaders on mission to collect some ancient magical stones. In any other game, you would probably play as the latter group.
There are plenty of characters, sidequests, macguffins, dungeons, and bosses that you have to face down. The setting and plot aren't terribly original. Honestly, if you've played a lot of RPG's or even fantasy games of other genres, you've probably seen a lot of it before. That doesn't take away from the quality, in my opinion. Cliches have become such for a reason: because they work. I'm not saying they can't be bad; in fact, they can be horrible, it just depends on how they are approached. Guardian's Crusade has a lot of tropes, but it plays them very well.
That's not to say that it doesn't have any originality. Knight's interaction with Baby is a huge aspect. This was the era of Tamagotchi and Giga Pets (teenagers, go ask your older siblings) and GC had a built-in pet simulator. You don't control Baby so much as you raise him. Feeding him, talking to him, playing with him, and making him your friend has a major impact on your relationship. It isn't as deep as some similar games since then, but it adds a dimension and it does have an effect on gameplay, especially the battle system. 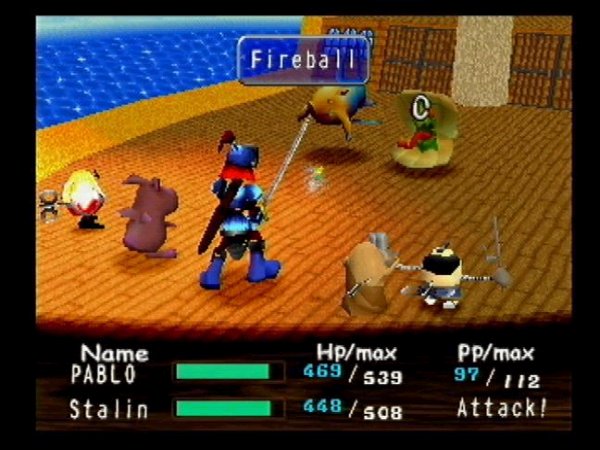 Which brings me to my next point: the battle system is kind of unique. On the surface, it plays just like any other turn-based system. Peel back the superficial layer and it actually takes a much different approach. Despite being the main character, Knight doesn't have a very direct role in combat. He only has one attack, a basic sword slash that evolves over time. Rather than a fighter, your role is more of manager. You spend most of the fight handing out items, managing the living toys, and coaching Baby. Baby isn't directly controllable. You can give him orders, but he ultimately acts of his own free will. His behavior is tied directly to his relationship with you. The more he likes you, the more likely he is to help. It adds a dimension to training your mon that would fit well in a Pokemon game.
The other major part of combat is the living toy aspect. Throughout your journey, you find and collect a variety of little comrades scattered throughout the world who you can call on in battle. Some act as temporary party members, getting their own turn in combat and attacking alongside of you. Others are one-off, effectively replacing magic and spells in game's combat system. Managing these little guys is as big a part of the fighting as Pokemon-ing Baby, maybe even more so.
Another part of the game that I really like is that it was little ahead of its time it was in a couple of the minor RPG complaints. This was one of the first games where you could see monsters on the overworld before the battle. Similar to Earthbound, they would even look different and change their behavior based on how strong you were in relation to them. Another thing that I like is that late in the game, the whole world opens up. You get the ability to fly, which means you can explore the entire world, sandbox-style, in real time. And I do mean the ENTIRE WORLD. There isn't a single invisible wall in the whole game, and even sections of the planet that aren't relevant to the story will have little odds and ends speckled throughout to find. It's a really cool feature.
It had a lot of good moments that resonated with me as a kid. I have gone back and played more times over the years, and that magic never went away. Guardian's Crusade is not the most original game ever. It might not impress you. It impressed me, though. It impressed me a lot. It impressed me enough for it to climb high into my heart. I knew I would love this game before I even played it. I've since played it several times, and I love it like I do a family member. 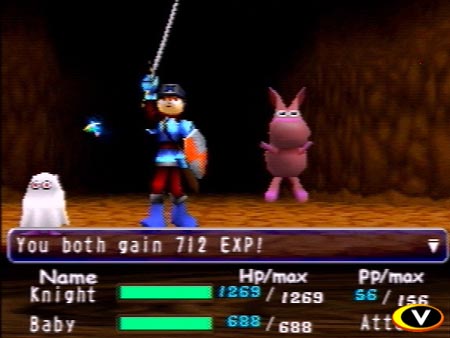 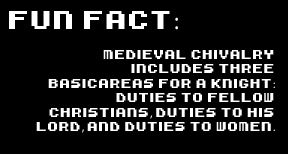