The Dark Digital Depths of Despair

You know, video games are pretty fun. Don't know if you know that. Systems to master, weird stories to experience and dropkicks to engage in. All good stuff.

But you have to be wary sometimes. Of what, you ask?

Not the actual Fear, mind you (the dude's waaaaay too weak to bad mushrooms to be scary), but THE UNDYING KNOWLEDGE THAT THE POLYGONS YOU SEE BEFORE YOU WOULD EXTERMINATE YOUR ALL IF EVER GIVEN THE CHANCE!

...I mean, outside of shitty creepypasta (the one and only kind, fight me), games cannot hurt you. Physically. But the mind? The mind is weak, susceptible to influence, prone to error and known to betray you at every other turn.

Video games burdened me with Thalassophobia at a very young age (not to be confused with tall-ass-o-phobia, which is another kettle of sauce pans). Or perhaps just exploited what was already there. My memory of the 90s can be rather selective.

It's essentially a fear of deep expanses of murky water that ARE DEFINITIVELY WAITING TO UNLEASH ITS HELLBEASTS AND PULL YOU DOWN WHERE THE SUN DON'T SHINE!

This subreddit is full of examples if you don't get the picture. I'm usually fine with swimming, but there are of course exceptions from time to time. It's in games where I most often have to deal with this phobia of mine. So, let's have a walk through time and go through the things that have terrorized me over the years, shall we?

I have to start with Ape Escape. Fun game, but man did anything having to do with the raft suck for me. The swimming in the second level left me uneasy, but when I reached the fourth level, things took a turn for the worse.

And that's because of the fella up there. Sweet jiminy Christ, what a monster. Not only is it ugly, but this catfish has enough human features to seemingly grimace at you inbetween electrical discharges.

It's not apparent in the screenshot, but this fucker is out for your charred corpse. It moves to spend as much time as it can under you while remaining chained to its AI leash. Which makes trying to platform out of the raft and onto the small platform it guards a harrowing experience.

I don't think I've actually fallen into the water, but just the thought of it scares me. And that's not the end of it, oh no. There are multiple sections where you have to ride the raft to avoid dying in water. There's another fish in the next area, some machines that make water spirals in the basement of the office building level and some jellyfish in an ice level.

And those are another flavour of horrible, as you need to swim outside of their range in order to find a monkey. I'm glad that they realised just how horrific this was and went with smaller fish and lava in the sequel. The remake even made it less horrific! 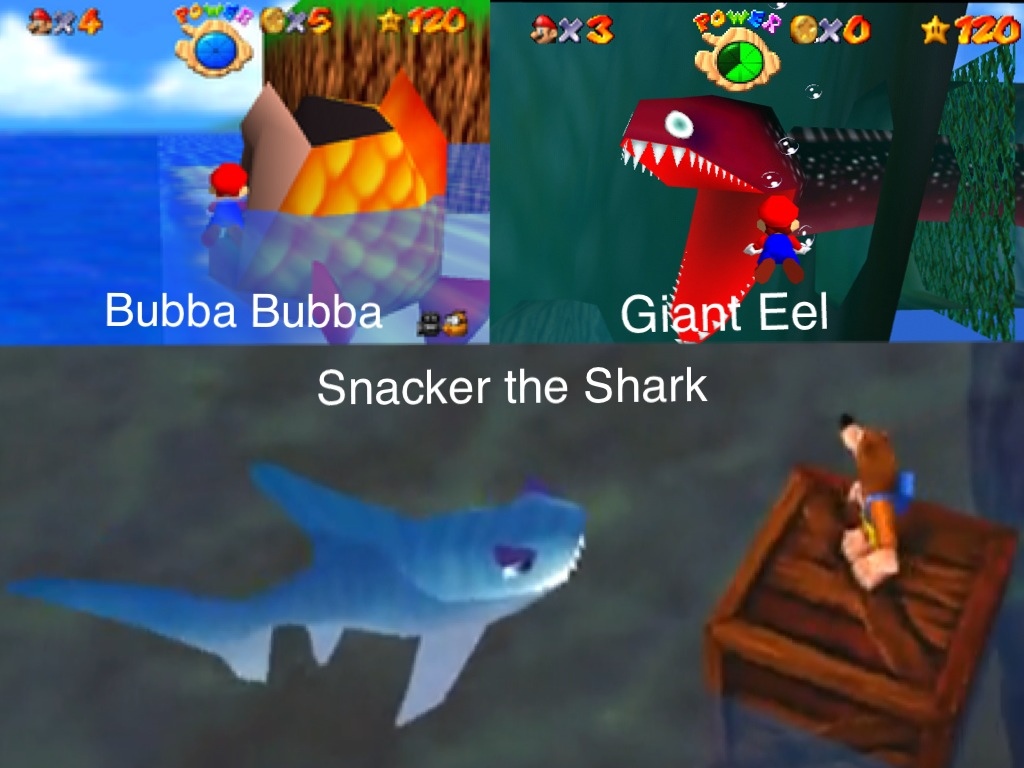 All right, let's go with some honorable mentions. I wasn't an N64 kid, but my neighbour was. I can't recall how much Banjo 1 and Mario 64 I was exposed to back then, but over the years I've heard the stories from other people.

The eel in Mario 64 is a classic fright, in spite of how goofy it is. I blame the fact that you have to get so close to it for a star. But Snacker? Fucking hell, he would've scarred me something fierce. I mean, a talking shark that JUST APPEARS when you get in the water? Even in a side area in another level! AND YOU CAN GLITCH IN MORE OF HIM!

Snacker's theme reminds me: Shoutouts to the drowning music in Sonic 2. Good thing I dodged that bullet as well.

All right, let's get back to something I actually played a decent amount of. Atlantis: The Lost Empire for Playstation is an interesting licensed game that's almost kinda good? I'd need to replay it and actually beat it first though to pass FINAL JUDGEMENT. On the review pile it goes.

The game is of that impossible-to-define genre action adventure. Which means there is a little bit of everything mechanics-wise. But you do spend a good amount of the game underwater. With a limited air supply. 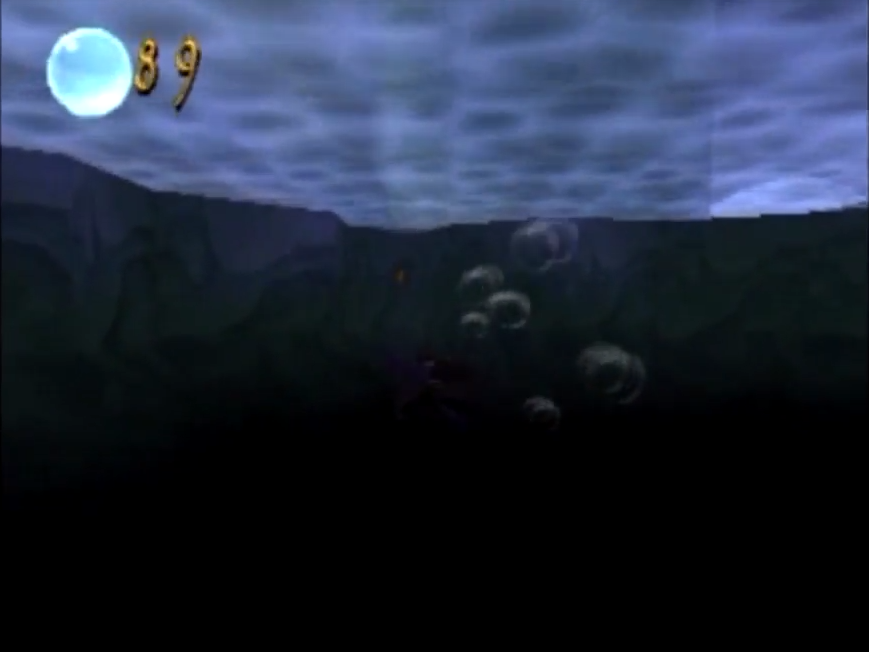 This image brought to you by the polycount of Playstation games, my lazyness, cheap recording devices and Youtube's detail-devouring compression algorithm.

Not a fun time really. A few moments stand out to me. There's the maze-like swimming section you have to go through while escaping the ship at the start. Which is bad enough, but you have to go out of your way to find shinies and there are giant shrimp monsters patrolling the water-filled halls.

Then there's THE section I hate, which is pictured above. Once you escape the Leviathan, you wash up on a shore where you get to choose in which order to tackle the next levels. Once that's done, you have to go into the water and endure the complete DARKNESS that awaits you on the bottom. There's nothing dangerous there, but the fact that you can't see the bottom just destroys me.

I guess I gotta give Insomniac props for letting you swim with infinite air. But the fact that they included INSTAKILL ROBOT SHARKS really makes me wanna hold on to that props. You do get to fry them at the end of the level, but still. And the giant robot shark in Spyro 3 also got under my skin.

Next up is the border patrol creatures in the Ratchet and Clank & Jak and Daxter games. They're incredibly similar actually. In Ratchet 1, the water isn't see-through and the sharkigator barely make a sound as they eat you, so it's not terrible. You even get to kill some after you landlock them.

The Lurker Shark though? To hell with 'em all! They poof into existence whenever you go into deep water, which would be fine if not for the fact that you need to traverse deep water to get to a level. It's not difficult platforming, but it ain't a fun experience. And the sound they make, uggh. I'm quite glad the sequels went for a laser turret and a goofy octopus tentacle instead.

My last truly standout experience has to do with the Shark Attack mission in Sly 3. It's in first-person and the controls aren't the easiest to get used to. And one of the objectives involves HUNTING sharks. What kind of sharks? These sharks.

You may now proceed to AAAAAAAAAAAARGGGGGGH!

Those bastards are bad enough, but what really gets me is the view you get of the endless abyss if you look out of the side of the area. Bone-chilling stuff.

But it was the last time I found a new thing of this ilk in a game to be afraid of. Being a child makes a lot of things scarier. Even playing Resistance 2 or Resident Evil Revelations didn't ellicit strong reactions, even though both games feature swimming sections with instakill monsters. Maybe I've become more resistant.

I haven't actually played Amnesia: The Dark Descent, but I get the impression that the water monster in that game would scare me too. A lot of this has to do with how vulnerable humans are in water when compared to what lives there. And in games, this usually translates to swimming/wading controls that are more sluggish than your regular ones, meaning that one panicked slip-up could be the end of you.