The 90's were a weird time for video games, when you actually go back and think about it. Most people in the west choose to remember the Sega Genesis' battle with the Super Nintendo, then later the Sony Playstation vs. the Nintendo 64. That's a simple way to remember the 90's console market, but when you dig into it, you realize that there were a lot more disfigured abominations in between. I'm talking about forgotten monstrosities such as the 3DO Interactive Multiplayer, the Atari Jaguar, and the Phillips CD-i. Nintendo had successfully revitalized the market after the video game crash of '83 with the NES, and now it was time to get into some serious competition, and a lot of players were stepping up to bat.

But perhaps the strangest, most bizarre contraption actually came from Nintendo itself. It happened during that forgotten transitional period between Donkey Kong Country and Super Mario 64, when developers were trying to work out 3D gameplay to justify all those extra bits that their wiz-bang new consoles were supposedly pushing. While the Nintendo 64 was still pre-drinking, preparing itself to stagger out of the gate and join the party, Nintendo rushed another console out in the interim. It was the Virtual Boy, and it failed legendarily. 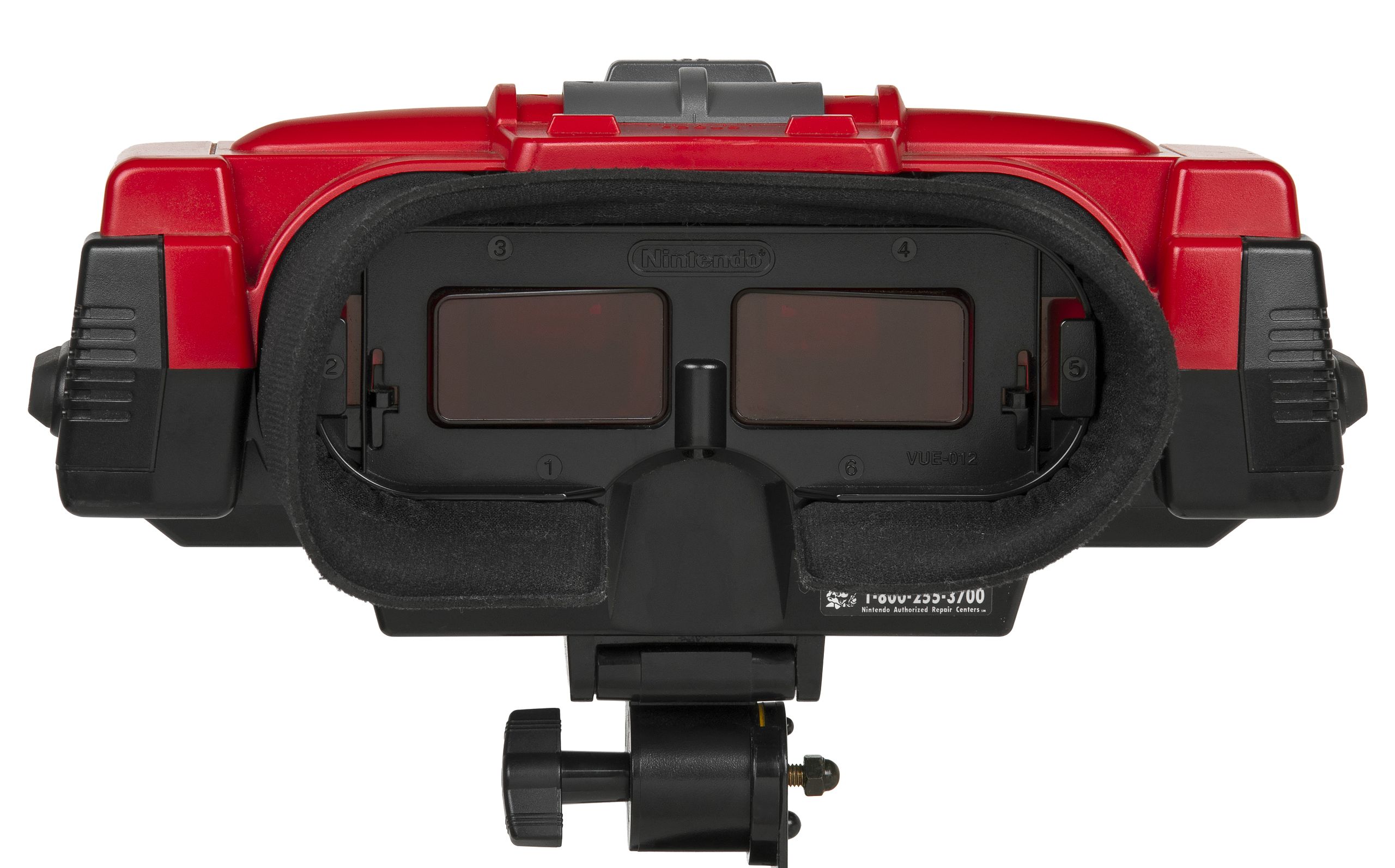 The Virtual Boy certainly had a worthy pedigree: Its development was lead by Gunpei Yokoi, one of Nintendo's big brains in the early days, and the designer of the Game & Watch and the Gameboy. He was also the mentor of Mario creator, Shigeru Miyamoto, so this guy knew his stuff. Yokoi was toying around with ideas for his new device when the higher ups caught wind of it. With the N64 struggling with delays, they allegedly rushed his new device out to market in an attempt to fill the void.

In its final form, the Virtual Boy was certainly something to capture the attention of 90's youth. It was a headset of red and black, looking strikingly like of virtual reality unit from contemporary sci-fi. Rather than actually wearing the display using a head-mounted harness, as one would expect, the unit sits on a pair of stilts and is intended to be set onto a desk or table and then looked into.

The colour scheme was more than an aesthetic choice. The system's display was monochromatic red and black, giving its games a unique appearance, if nothing else. A full colour display was supposedly an option, but would have made the system significantly more expensive. The images were produced by shining a single vertical line of LEDs into oscillating mirrors that drew the image on screen. Each neoprene eyepiece also presents a slightly different image that gives the impression of true 3D depth. This may sound like a troublesome display to play games on, but really, the image is sharp and the 3D is convincing. Like a shot to the face. (Image source: mobygames.com)

The Virtual Boy ended up hurting itself out of the gate. The most obvious problem was player expectations. Everything about the Virtual Boy and its marketing suggested that this was supposed to be a publicly available virtual reality experience, and that simply wasn't the case. Putting aside its limited colour palette, the hardware wasn't powerful enough to render detailed polygonal 3D environments, nor did its hardware contain any features beyond a display and a controller to provide an immersive experience. To put it bluntly, it was a Gameboy that you stuck your face into.

This brings us to the second problem: a lot of people suffer discomfort from playing the damned thing. Sitting it on a table and sticking your face into it requires you to either hunch or simply sit stationary in the same position for long periods of time, which can place strain on the neck and back. The most comfortable way to use the system is to lie back and have it sit on your face with its legs propping it upright. This is workable, but still very uncomfortable.

A lot of people also had issues with the 3D display causing eyestrain. This could be caused by poor calibration, as the system guides you through focusing the lenses every time you start it up, but some people also are more sensitive to these kinds of images. It's a complaint common with current VR and stereoscopic 3D images; some people just get headaches from simulated depth.

Personally, I haven't had problems with eyestrain or headaches, but when finally taking the device off, having to readjust to ambient light is disorienting. It's sort of like walking out of a darkened movie theatre and into the afternoon sunlight. That's not the end of the Virtual Boy's issues. To put it simply, the system landed with a tremendous thud. Developers weren't exactly lining up behind the weird little console. Four games were available at launch, which was a respectable number. Then, for about eight months, titles trickled out until they just... stopped. Literally. In all, 14 games were released in North America.

They weren't even necessarily quality titles, either. A lot of genres, such as RPG and Racing, were simply not represented on the platform. First-person shooters, a sub-genre that seems perfect for the platform, were nowhere to be found either. Most of the games were remarkably shallow, even first-party offerings. Mario's Tennis made it's debut, and lacks any bells and whistles beyond simply playing individual matches against other opponents. Lester's Funky Bowling is similar, with no tournament or campaign modes. Mario Clash is something of an updated, 3D take on the original Mario Bros. (not to be confused with its Super sibling), featuring single-screen arcade gameplay. It's not that these games were bad, they just weren't very compelling.

Even the worst offenders on the system weren't all bad. Waterworld is probably one of the worst, and that's largely because it too is a simple arcade game with no compelling hook. Red Alarm at least has 3D graphics, but it largely uses wireframe polygons, which is really disorienting.

Really worthwhile games on the system are equally as rare. Teleroboxer is probably the most compelling use of the technology, a first-person robot boxing game that plays like a cross between Punch-Out and Battle Clash. I could never really get past the third or fourth stage, but the gameplay is fun and the presentation is absolutely spot on. Alternatively, there's the awkwardly named Virtual Boy Wario Land, which is a tremendously fun game that ranks pretty highly on my list of favourite platformers. I definitely recommend playing it, but it's perhaps not worth buying a Virtual Boy just to do so. 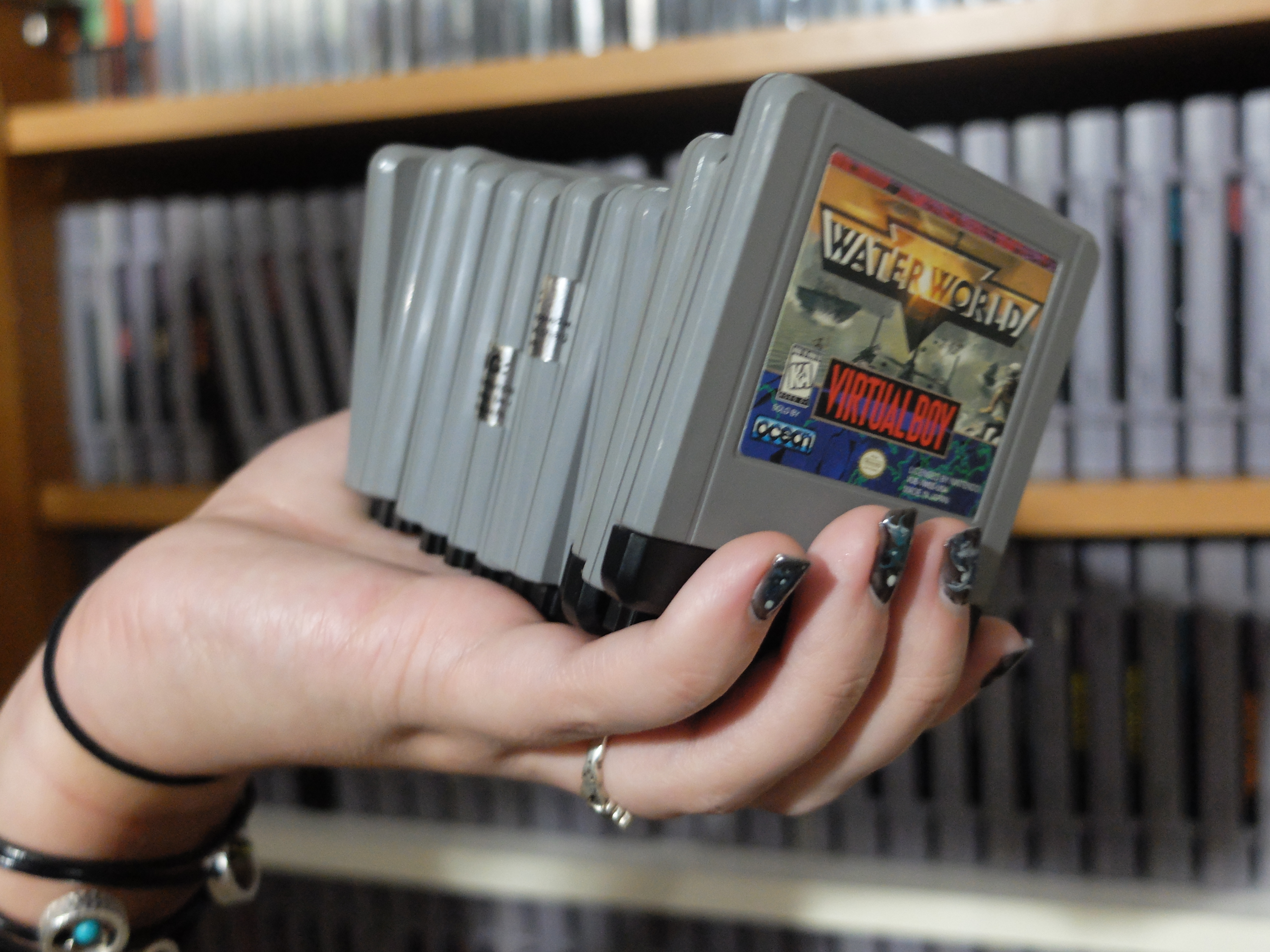 Every single Virtual Boy game released in North America, right in the palm of my dainty hand.

The Virtual Boy didn't even make it through a year on the market before it was given the axe. According to some sources, it sold as low as 770,000 units in its short lifetime, probably entirely due to the brand name behind it. It's not the biggest flop in gaming history, but it's by far the worst for Nintendo.

It was bad enough that persistent rumours claim that Gunpei Yokoi shouldered all the blame for its failure, and soon departed Nintendo due to the resulting ostracization. It's an interesting story that plays on the western image of a Japanese zaibatsu, but its validity is questionable. Regardless, Gunpei Yokoi did indeed leave Nintendo shortly after the Virtual Boy's failure. He founded his own engineering firm, Koto Laboratories, which was tapped by Bandai to create the Wonderswan, a Japan-only handheld console that was modestly successful in its home country. Unfortunately, he died in 1997 before he could see its release. Regardless of the surrounding circumstances, it's a sad end to such an illustrious career.

As for the Virtual Boy, Nintendo would probably rather forget about it. To my knowledge, not a single one of its games were ever re-released or ported to another console. There were hopes that games from the console would land on the 3DS, but it never came to pass.

It hasn't been forgotten entirely. Nintendo often acknowledges the system with sly references to it in games like WarioWare and Animal Crossing: New Leaf. Likewise, the red and black colour scheme pops up in the odd indie game as quick visual reference. That's more than can be said for a failure like the Apple Pippin, but it's a dubious place in gaming history that it holds nonetheless.

So, maybe don't go rushing out to look for a Virtual Boy any time soon.

This article was originally posted on my personal blog, the Game Complaint Department.