No More Heroes Pics: Learn to fight from Russian drunks.

1:24 PM on 11.04.2007 (server time)    0
For those that don't know, No More Heroes is going to kick ass. From everything I've seen, this game will be the one true reason for Wii haters to start to change their minds. Mario Galaxy wont do it. If you've never like Mario games before, Galaxy isn't going to convert you. Brawl wont do it. Again, if you aren't already a fan of Smash Bros, Brawl isn't going to turn you around.

But No More Heroes, now there is a game capable of converting even the most staunch Wii-a-phobic dude. It looks like Killer 7 and plays like a cross between GTA and God Hand, with coinciding bizarre, juvenile, ultra violent humor. The Wii needs more games like this. It's the only area where the console is really lacking.

Here are some new pics of the game.

You meet this Russian drunk named "Randle Lovikov". He's apparently a master of combat, but is more interested in selling his techniques than using them. I assume he needs money for booze. 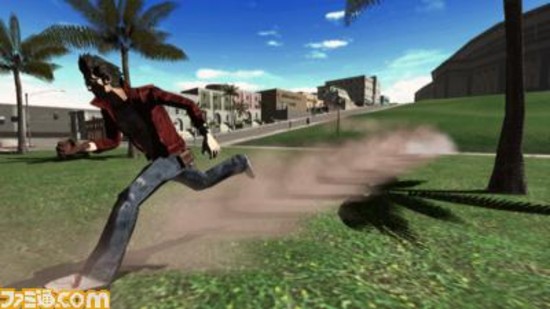 All pics taken from here.

Not the most exciting update, but cool info none the less. I could never get into GTA because the reality based monotony just brought me down. With No More Heroes, you get all the insanity of a video game with all the freedom and violence of GTA. Perfect combo? We'll see.

And here are some new vids as well. The first is a promotional vid for the games' Japanese pre-order gift. I think this may be a first. Games usually get their own ads, but an ad for a promitional key chain? Hey, I aint complaining.

The second is a little taste of Sylvia. She is such a Hoo-er. I think I love her.

All available vids launched on the game's official site can be found here. Looks like next week we'll get a look at the odd jobs Travis has to do to earn money, including coconut hunting and lawn mowing. I am so into games that make fun of how stupid life's jobs are. Shenmue started this brand of comedy in games, but No More Heroes just may perfect it.

So, are you guys pumped or what? Any Wii haters out there even a little interested in this game?
#Community
Login to vote this up!