Recap of the Waifuween movies

(Note: I would like to thank some of the community members for encouraging me to put the qpost up into the blog. The previous qpost can be found here.)

Once upon a time, we had a lovely member 'round here called Angie22, who really loves posting hilarious GIFs and some appropriate yandere contents. Oh, and she was primarily known for her usage of Life Is Strange's Chloe Price as her avatar.

At one time, some of us joked that one of the characters from The Emoji Movie (Sorry) does look like Chloe Price, which then Angie proceed to join in by putting up lots of pics and GIFs of women with a bloody weapons, and Chloe's face superimposed on their faces.

It didn't take long until late September last year, that I had an idea to incorporate that idea for a Halloween project. And thus, Waifuween was born.

(If you wanna know more, click on the links above the posters towards the old posts. Sadly, the image provider of the older posts was busted, and thus unable to display the posters. Which is why I uploaded them again on this post. Thankfully, the GIFs were still working currently. Note that the GIFs on those linked post are data-consuming, though) 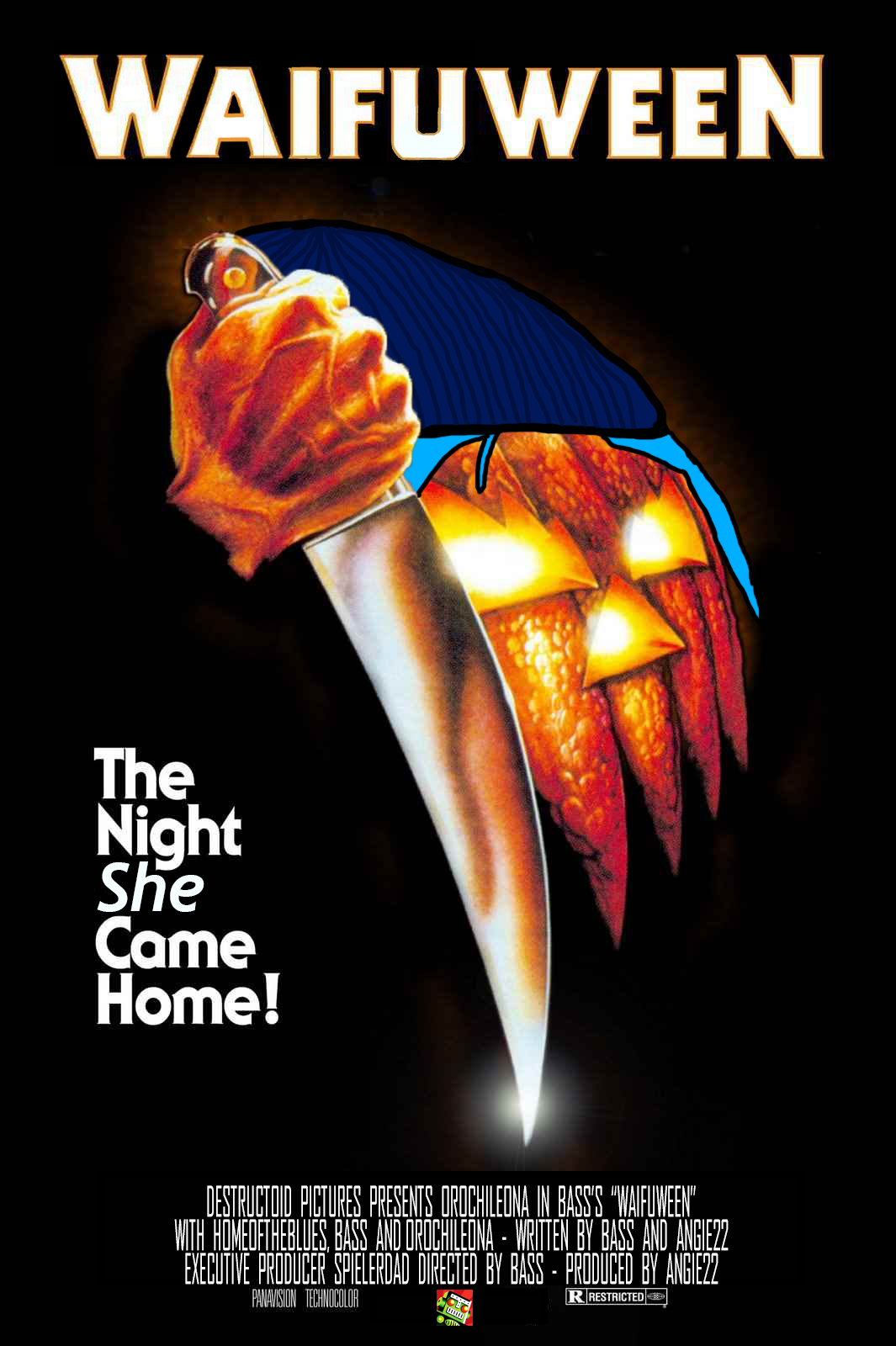 Throughout the 1st half of Halloween, I mostly do Photoshops of the first three Halloween posters. And throughout the series, the only consistent Dtoider-to-characters are homeoftheblues as Laurie Strodes, and orochileona (Chris Moyse) as Dr. Samuel Loomis. All the plots were straight ripoff from the original movies with significant parody changes.

(Had I known homeoftheblues had a wife, I would have get wilfoftheblues to be Laurie instead)

Short Summary: People at Darksiders, Illinois celebrates Waifuween every night for their waifus. On that night in 1998, Angie22 murdered her unnamed childhood friend for shitting on the former's waifu. 15 years later, Angie escaped from the sanitarium and returned to Darksiders, stalking homeoftheblues for supposedly shitting on her waifu. Also, orochileona were frantically trying to find Angie before more casualties happens. 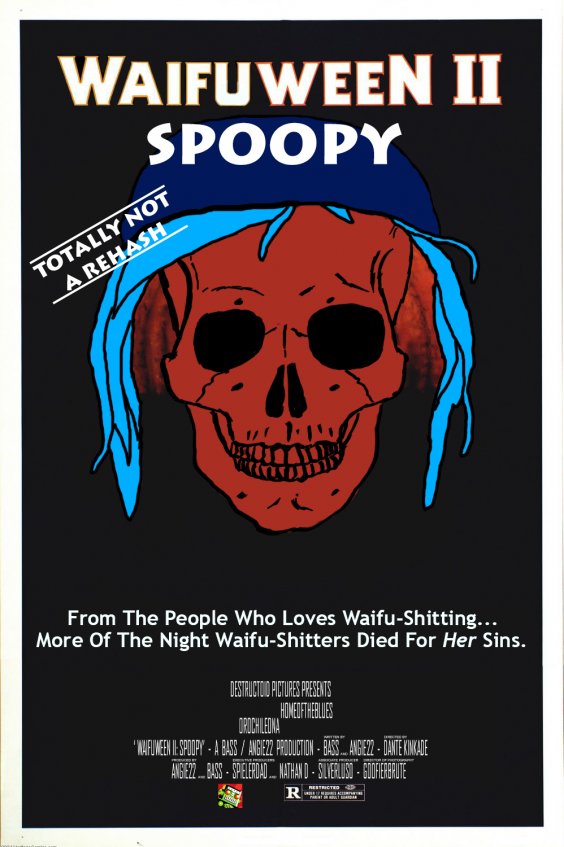 Waifuween III: Season of the Bitch 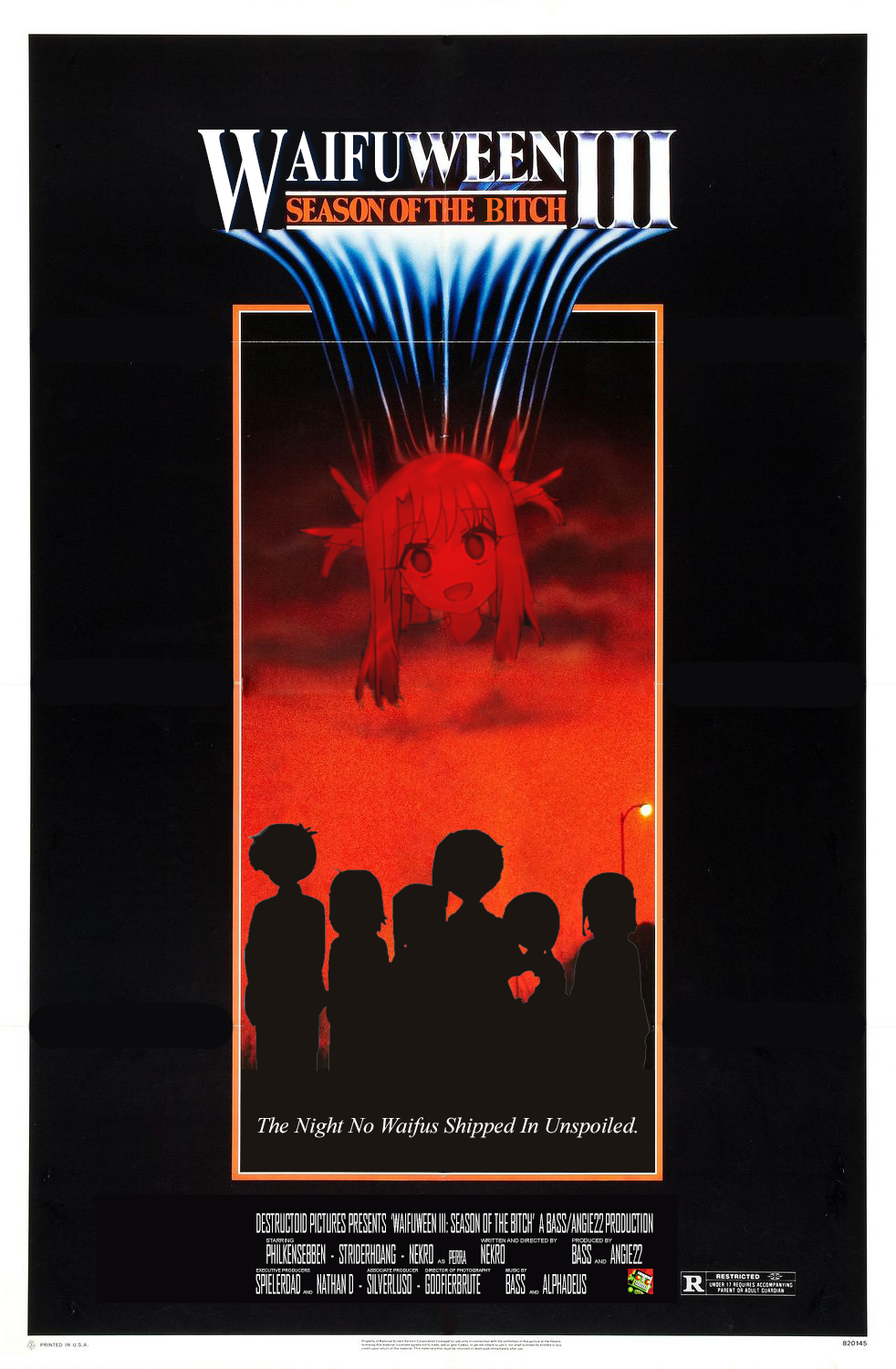 Like the original movie, no relations to the previous Waifuween movies. 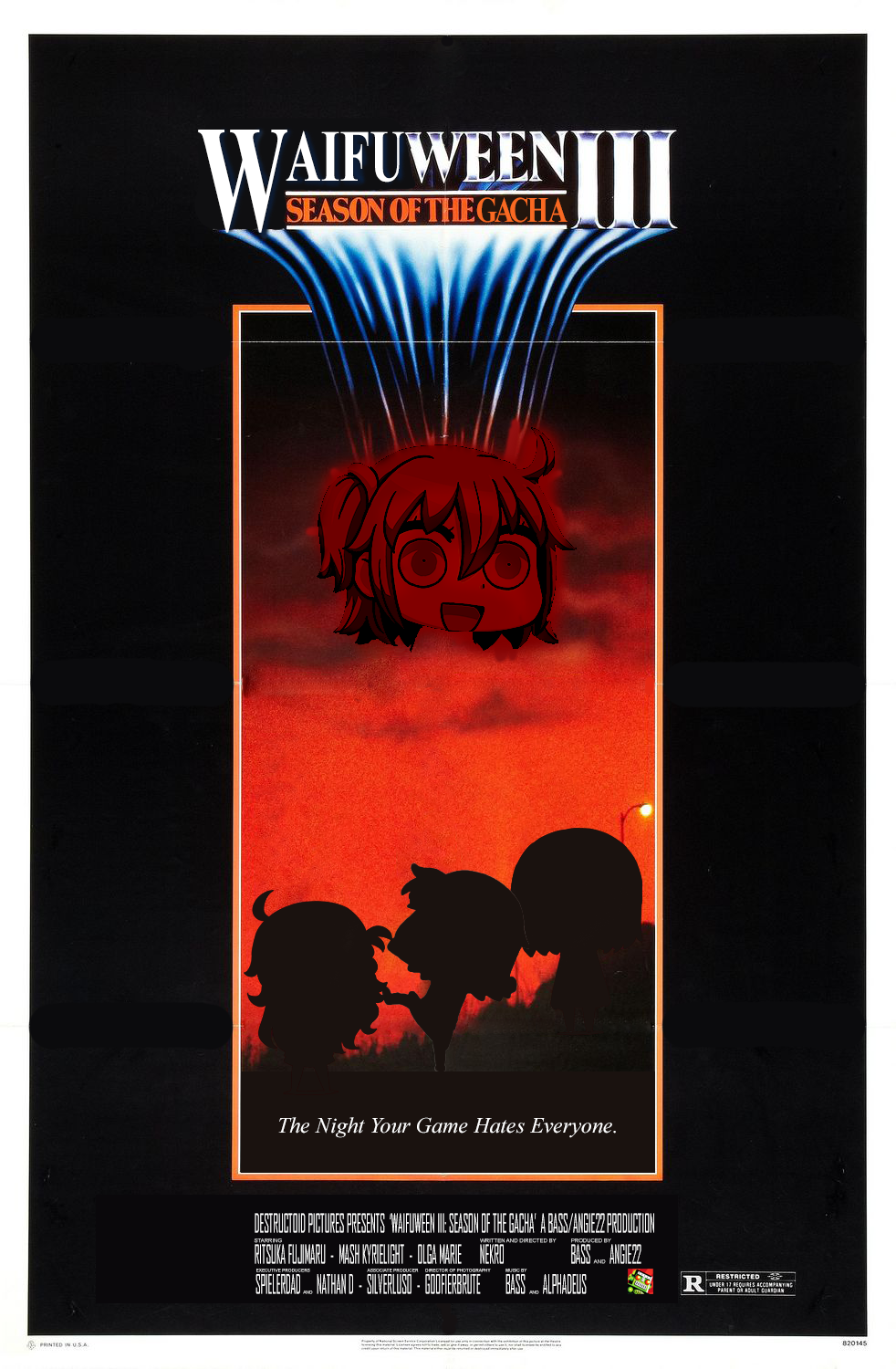 Waifuween 4: The Return of Angie22 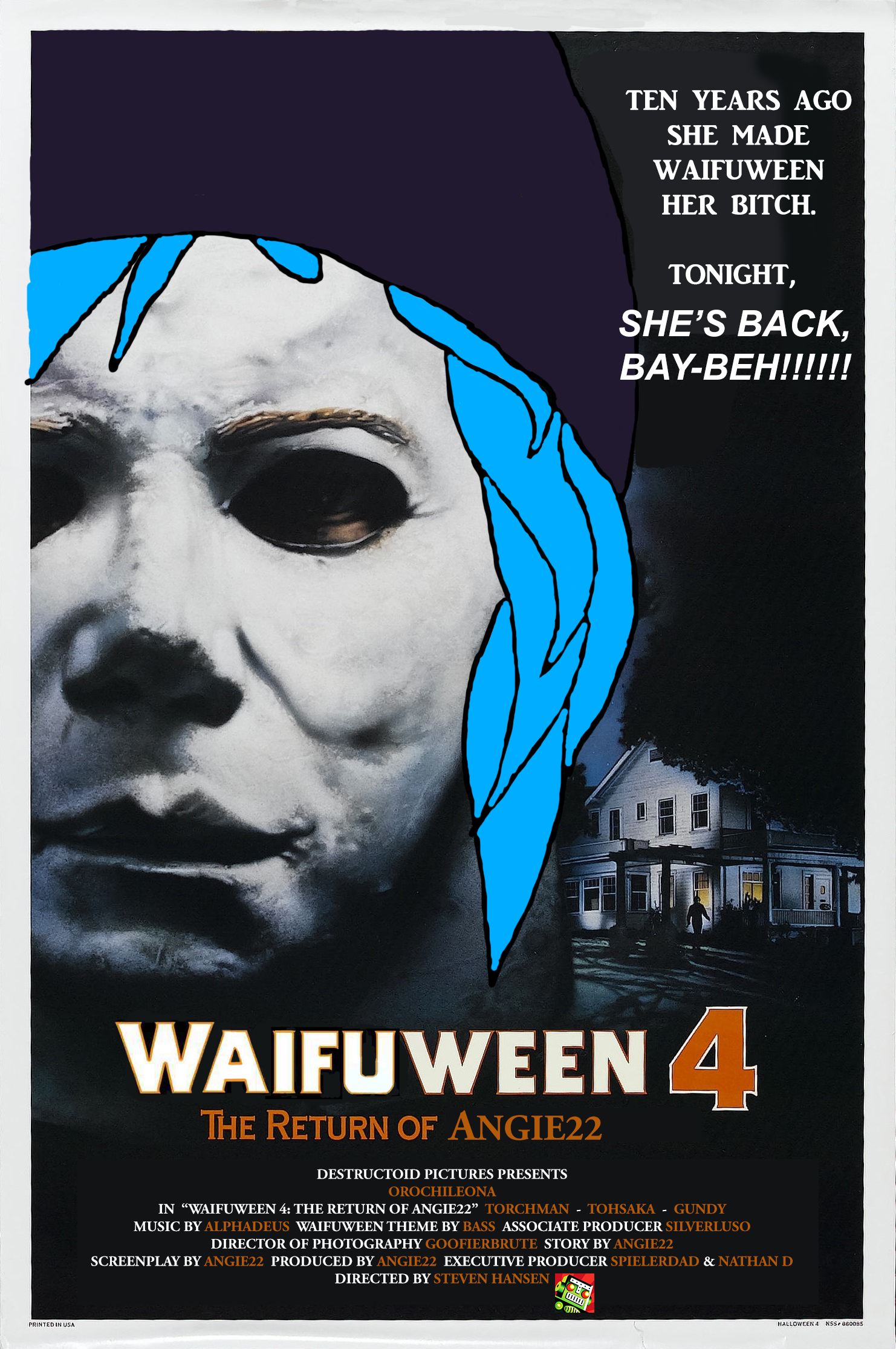 From this entry on, I've decided to included some movie GIFs, with the Dtoiders' avatar superimposed on the characters.

Short Summary: Continuation of Waifuween II. During the last ten years, homeoftheblues died at a car accident, leaving his son Torchman to be raised under Tohsaka's parents. Angie22 was unconscious after the blast from Waifuween II, she then wakes up and return to Darksiders again, looking for Torchman for shitting on her waifu under classmates' pressure. orochileona's still alive with some burn scars, return to do the same thing again.

Waifuween 5: The Revenge of Angie22 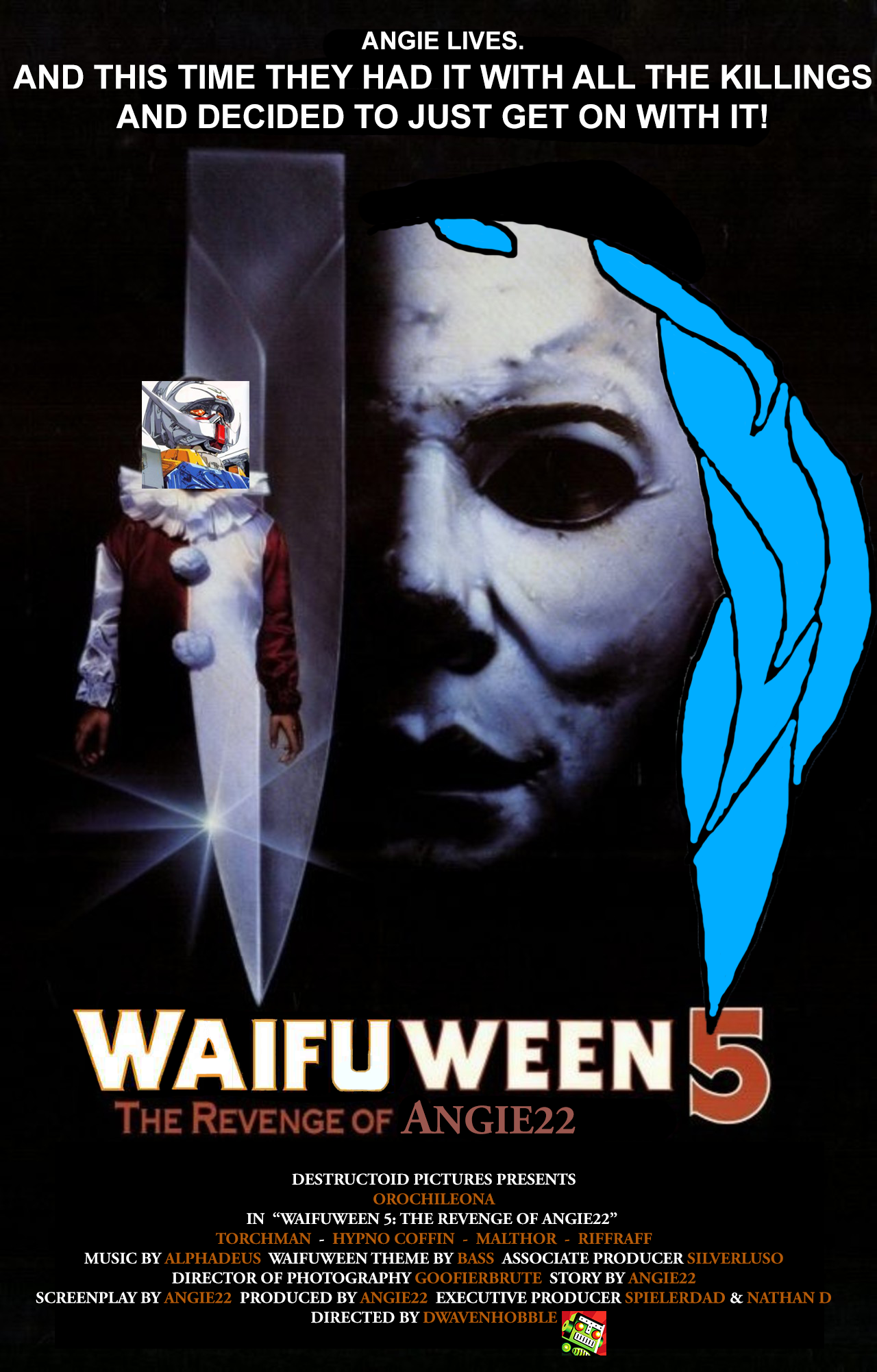 Short Summary: Same deal with Part 5, except orochileona was a bit of a jerk this time.

Waifuween: The Curse of Angie22 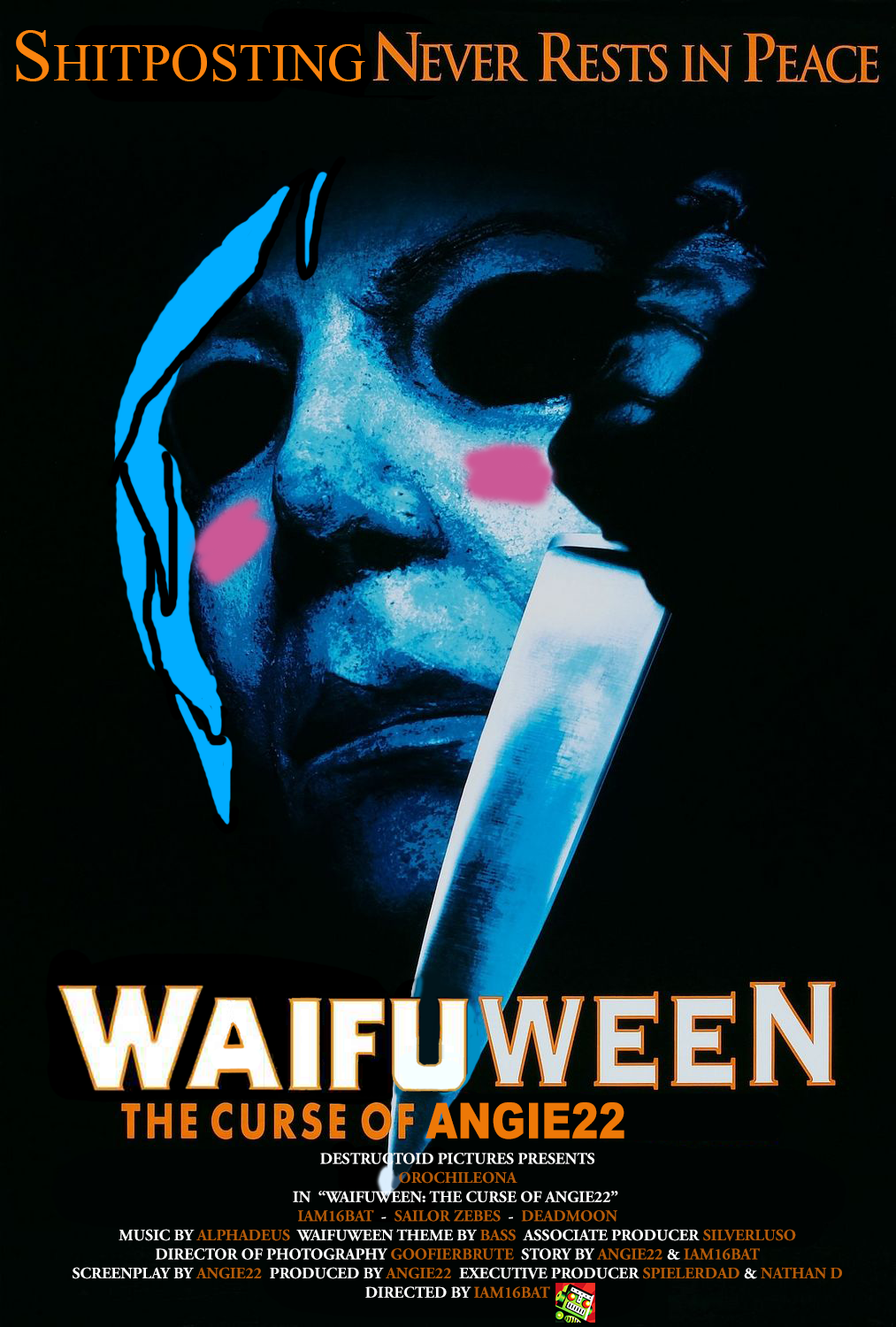 Short Summary: Torchman was kidnapped by a cult related to Angie22, forcing him to make a Gundam. Angie then killed him shortly before Torchman hides the gunpla at Darksiders. And then Angie tries to find it at Darksiders, again.

This is considered to be the most controversial of all the Waifuween movies to date, as not only I made the (poor?) decision to mock a Disqus user who's not a part of the community for his offensive and unhealthy fanboyism towards FFXIII (Just ask the mods, as I'm just not into discussing about it), but also the inclusion of a Dtoid user, who was good, until he's no longer here due to his... political views.

So there you have it. A fun project to get the Destructoid community in on the fun. And I'm doing it again this year, making parody for the next two films. Do note that since the next one is on an alternative continuity, all the community representation will be reset, and anyone can be killed the second time, and I've already knew a few new members to include into the movies. And if you see this, wilfoftheblues, would you like to take your husband's place as Laurie Strodes? And if not, how about a side character or a cameo?