(Note: A big shout out to fellow Dtoider Kevin Mersereau for helping me proofreading on the blog for words that was considered spam.) 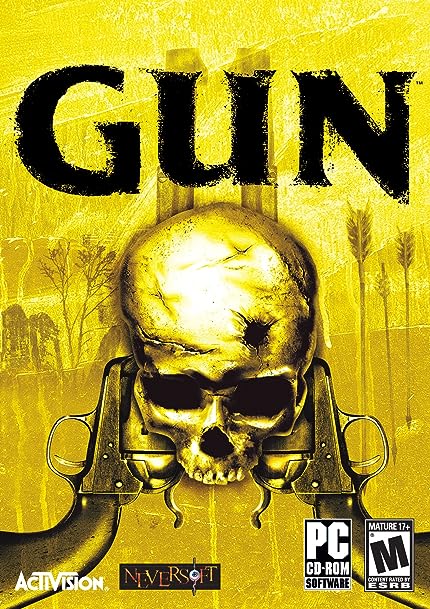 While the Western genre in the video game format were few and far between, that doesn't mean there aren't any notable titles. From the small-scale titles like Sunset Riders, Desperados and Westerados to the big-budget games like the Wild ARMs series, Outlaws, and the Call of Juarez franchise. Currently, the most famous Western-theme game amongst both gamers and mainstream audiences, are the Red Dead series by famed Grand Theft Auto developer Rockstar Games. Red Dead Redemption in particular, dazzled audiences (From my observations) with an impressive depiction of the Wild West (Technically the Twilight of the Old West) on an open-world sandbox game, a gripping story, great gameplay, among other things. It then became quite a sleeper hit, shipped over 15 million copies officially, and was considered to be one of the best games of all time.

Granted, I didn't play Redemption nor its predecessor Red Dead Revolver (Originally under Capcom before Rockstar took over) either, maybe because I'm currently too poor to afford any consoles to play them, and mostly because I'm a PC gamer who just preferred gaming on mouse & keyboard over controllers. Thus, many PC-exclusive gamers (including myself) were a wee bit jealous that only the console players get to experience RDR numerous times (Not helped that the game code were a jumbled mess, which makes porting extremely difficult. Unless Rockstar were willing to take their time to port the game, like what Capcom and Sega did with Dead Rising and Bayonetta respectively). And as its sequel Red Dead Redemption 2 coming out next month for the PS4 and Xbox One, along with Rockstar recently outright stated that it's never coming to the PC (Although their statement might have been mistranslated, so the PC version might still be a possibility), the PC gamers' wait for the next open-world Western game continued to be a painful one to swallow. (And the less said about Wild West Online, the better)

However, all is not lost as there is actually one open-world Western title, that once competed with Grand Theft Auto during the sixth generation of video game consoles, alongside its contemporary-theme brothers True Crime: Streets of LA & True Crime: New York City. And that game is GUN, developed in 2005 by Neversoft of Tony Hawk's Pro Skater & Guitar Hero series fame, and in this case, ported to the PC by longtime porting house Beenox. 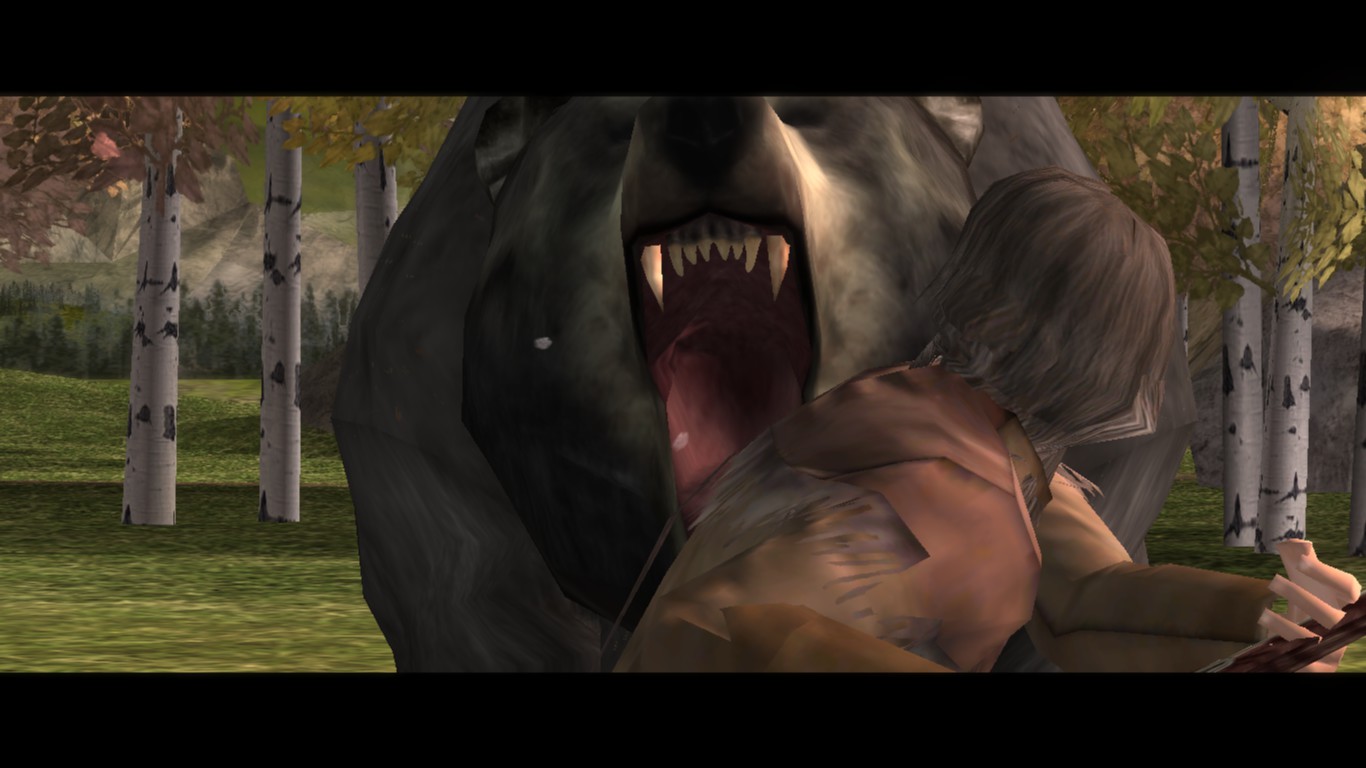 Ned survived a bear attack before it was cool.

First, let's get this out of the way. The PC port was not very good. Apart from the standard archaic 4:3 resolution and 30FPS lock, it also suffered from huge visual glitches that somehow were absent from my first short playthrough, but appeared in abundance on my second playthrough. On my second playthough, I've used ThirteenAG's Widescreen Fix for my 16:9 screenshots (which might or might not be the cause of the glitches), but sadly could not disable the framerate cap. The fix was also finicky on the pause menu, particularly on the redefine controls menu, where your onscreen mouse cursor doesn't exactly point at where it should be, so you'll have to guesstimate on where it actually points at to change the key bindings.

If you have the adequate hardware to run it (Who doesn't?), be sure to disable the 'Distance Clipping' option for the proper Western blue-and-orange skies, unless you want your Wild West to look apocalyptic with the sun piercing through the thick grey clouds. There's also the option for either 'Fullscene Effects' or 'Fulllscene Anti-Aliasing', depending if you desire for the game to have bloom effects and PS2-era motion blur (Though not as egregious as the GTA games, thankfully), or, well, anti-aliasing to smoothen out some of the the jagged visuals. 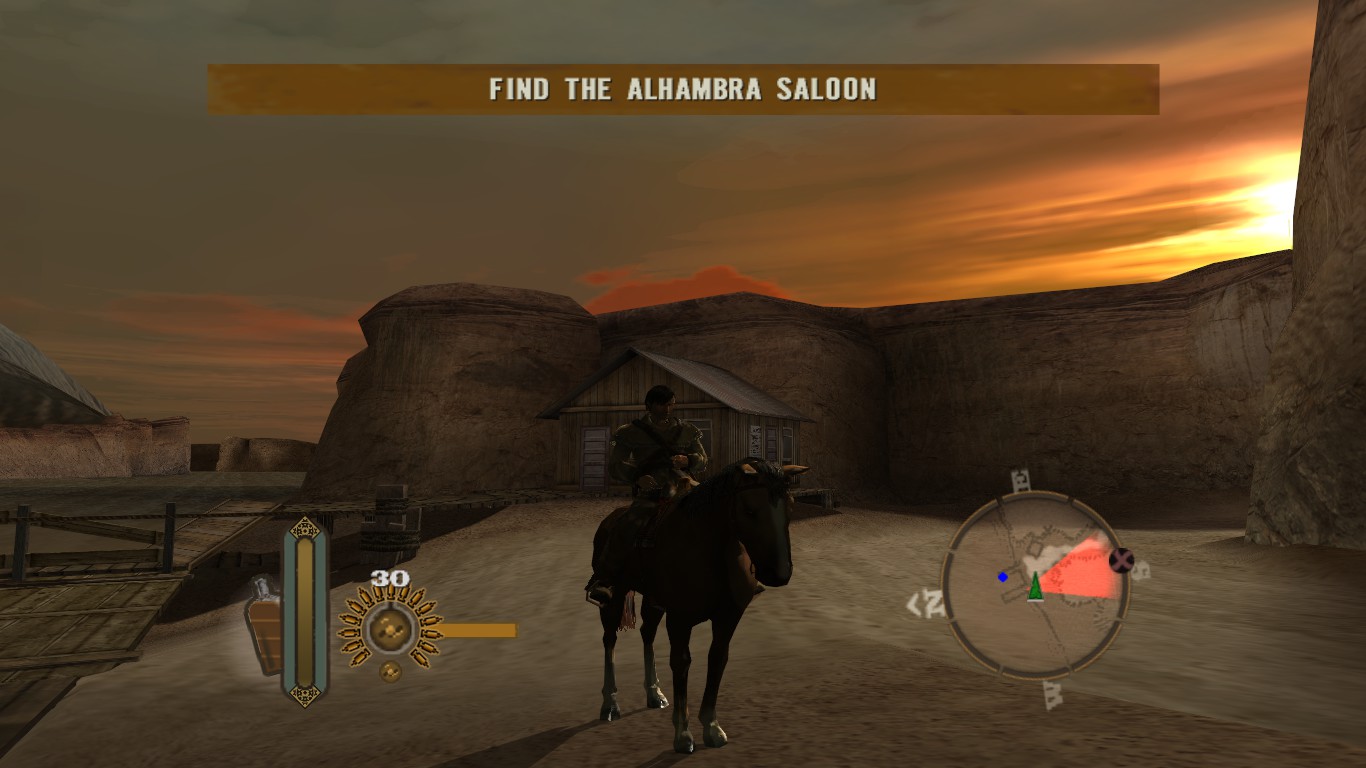 The comparision with the "Distance Clipping" On (Above) or Off (Bottom)

And on is the review, then.

In the alternate universe on GUN, during post-Civil War era at Montana, Frank Castle was reincarnated as Colton "Cole" White during the Wild West after him and his family were slaughtered by John Travolta's men. Cole was an intern under the apprenticeship of his father Ned White to complete his graduation as a mountain man. His beautiful future was ruined when during his and Ned's journey on a steamboat, some reverend who were clearly off his rocker summons his smexy bodybuilders to raid the boat. During the fight, Ned quickly revealed to Cole that he may have been his father, but he ain't his daddy before throwing Cole off the boat. After being unconscious for three days and learned that his not-dad is dead, Cole decided to take revenge the American way. Oh, and the reverend got his ear cut for his incompetence after his boss learned that his right hand man didn't take his pills before work.

I think I may have made up some of the details. 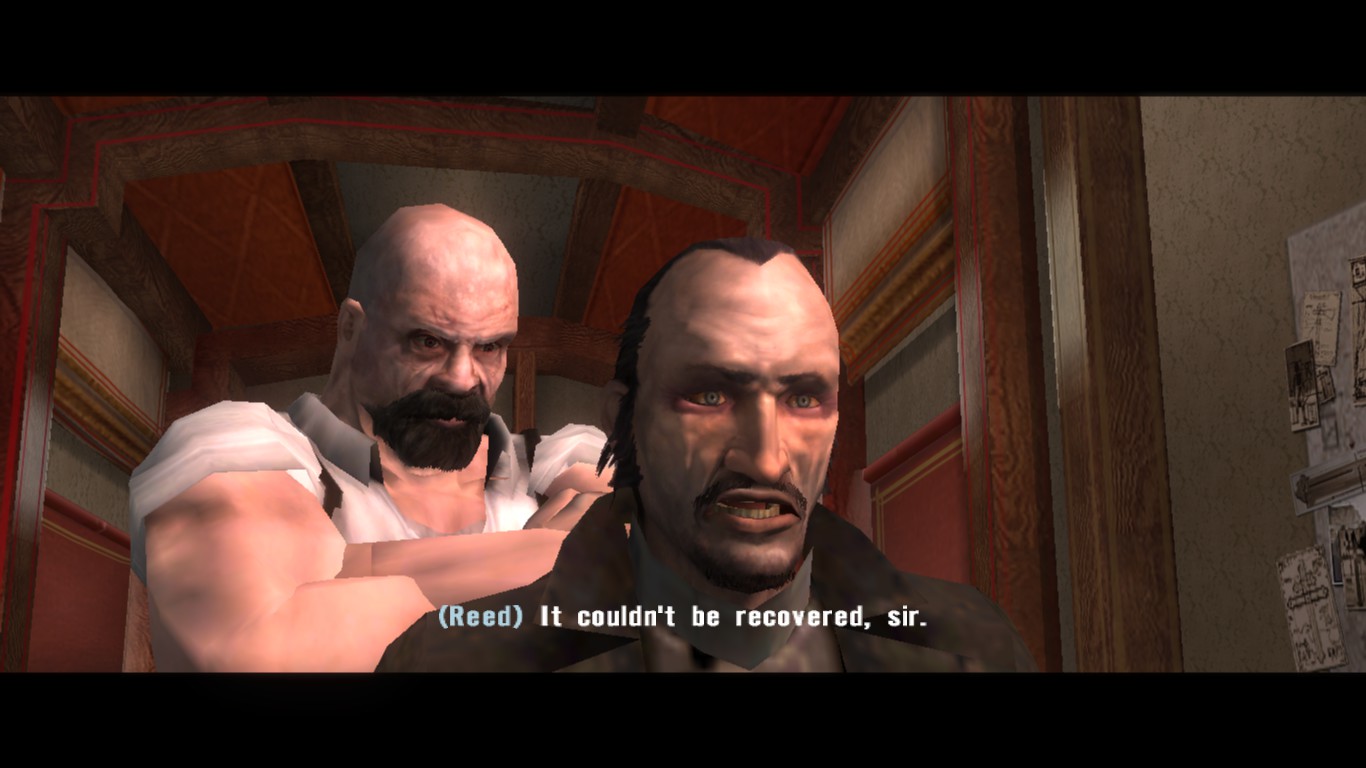 Some character models were pretty well-detailed..

As far as Western stories goes, GUN's overall narrative is okay (Do note that I haven't watched a lot of Western films). Cole's journey towards vengeance was overall solid if a bit cliched (Try and guess the motivation of a former-Confederate soldier as the main villain), supported by impressively-made cutscenes and a good cast of characters. Unfortunately, the plot just doesn't let you sink in and take a breath, as Cole was quiclky rushed through the narrative like a hot knife through the longest butter in your imagination. You'll quickly travel from one town to another without given some more main missions to get properly immersed on the last town you visited, as if it kept reminding you that this is a video game with a story, and Ned will be really pissed if you're not working double-time 'round the clock to avenge his sorry ass death.

Another bummer is that while all the characters are voiced by a lot of Hollywood A-listers, like Thomas Jane, Lance Henriksen, Ron Perlman, that old man from Blade (Sorry, Convoy fans), and etcetera, a lot of their roles were completely wasted by the game's rushed pacing, that not even the best writing could get us to like or even hate them enough on their short appearances. Thomas Jane did his best with an underdeveloped protagonist, although I was amazed that he could actually make his voice sounded like a young adult. (Speaking of which, the game tried to convince us that Cole were in his late-20s, but the plot hole regarding his origins only makes the writing mistakes even more glaring)

I should also mention that this game was disturbingly violent back then. Compared to the dark comedic violence of the GTA games where NPCs often died in the most awful way and often with hilarious results, in GUN headshots were depicted realistically (Most of the time), throats get slashed up-close, and people died slowly as they tried to crawl away to safety after getting shot. You also have the option to scalp any downed opponents, but since the supposed monetary gain from gathering the scalps were removed, it serves no purpose other than letting you being sadistic and hear the screams of someone getting scalped. 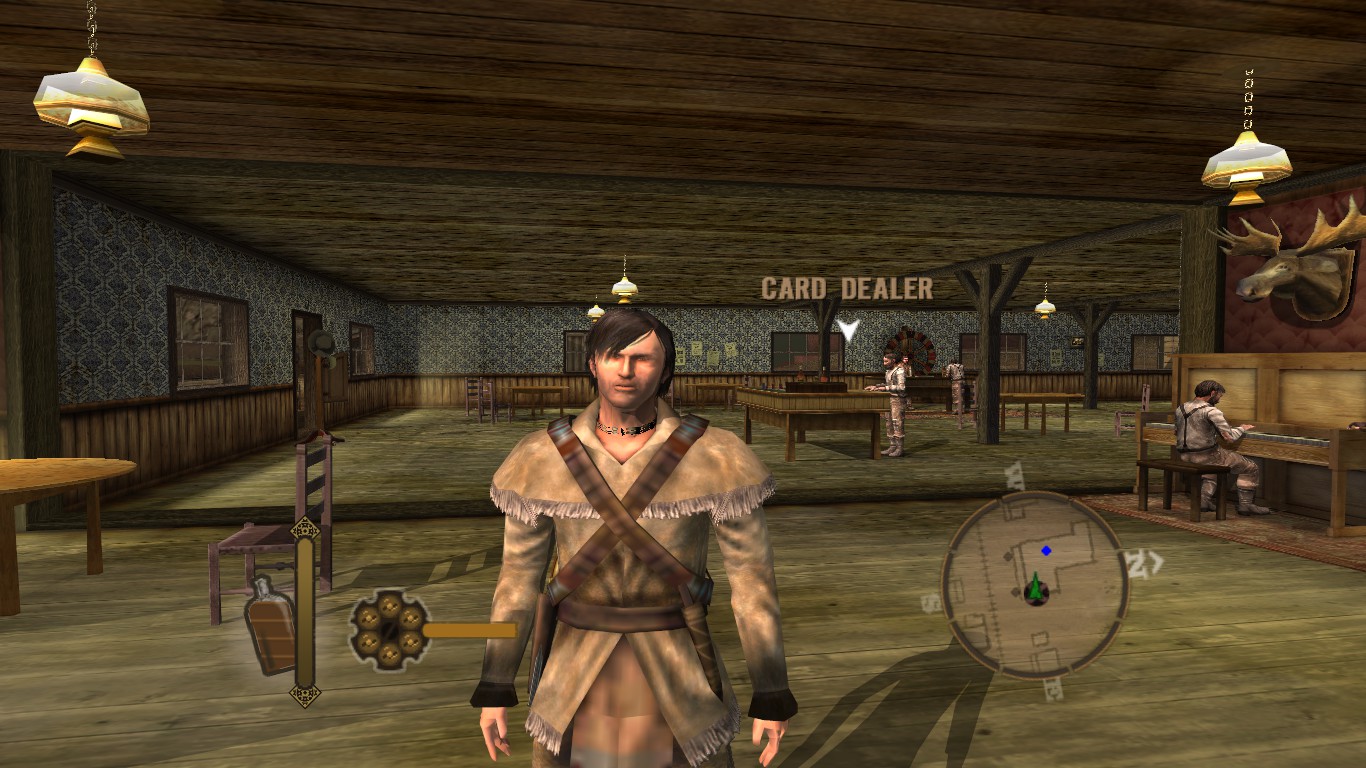 ...And some were a bit of a nightmare fuel. (Seriously, was his eyelids melted or something?)

Being the first Western-theme (as far as I'm aware) open-world title during the sixth-generation console era, it really did a pretty good job at visualizing the Wild West in this universe. The locations spread around the landscape was also varied, although I would argue that some places were completely devoid of even one person doing his/her activities, and the roads between the buildings on one of the Western town was a bit too wide to be believable. Not to mention the transition between the regions was uneven, to say the least. Character models look pretty decent with some good animations, although some of them were pretty downright ugly to look at.

Audiowise, I have nothing to complain about. The horse galloping sounds like galloping, and the gun firing sounds is as loud as you'd expect from real-life six-shooters and Winchester. The Native American death sounds was overtly loud and annoying to me though. The game also have a few standard Western scores played throughout the game, but the number of music on this game was just too few, and you will sometimes hear the same score within an hour of playthrough. 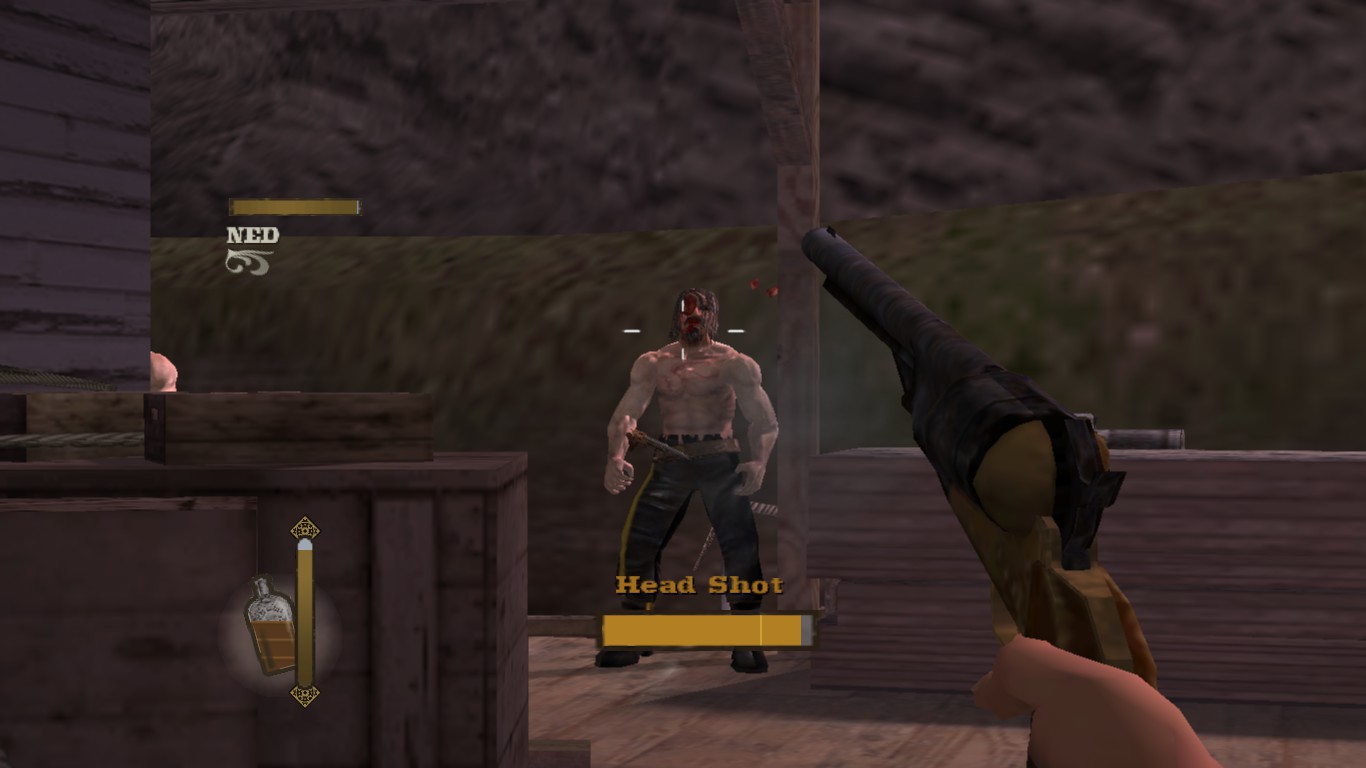 Some gore effects. And how the hell did the Wild West managed to produced such Schwarzenegger-esque soldiers?

If you aren't observant enough, GUN is an open-world game where you'll progress through the story by doing the bidding of whoever's on your good side at the moment, and some menial side quests the equivelant of a real cowboy on the real Wild West to upgrade your skills. For the most part, the story missions were quite varied for the most part, as they ranged from protecting the Chinese workers, protecting a stagecoach, stealth your way out of jail, etcetera. Not the most exciting type of missions even compared to the other open-world games back then, but they do keep you interested enough to progress.

The optional sidequests are where you get to upgrade your cowboy skills in addition to get some gold to seperately upgrade your guns and tools. Most of them, as I've mentioned, were pretty menial stuff and might bore some players due to its repetition. You'll get to be the deputy to keep the peace, ride a horse from one location to another in the name of delivery, hunting prey the Native way, and so on. Also, there are small gold mines scattered around the world for you to dig for extra dough, provided that you have the tools. 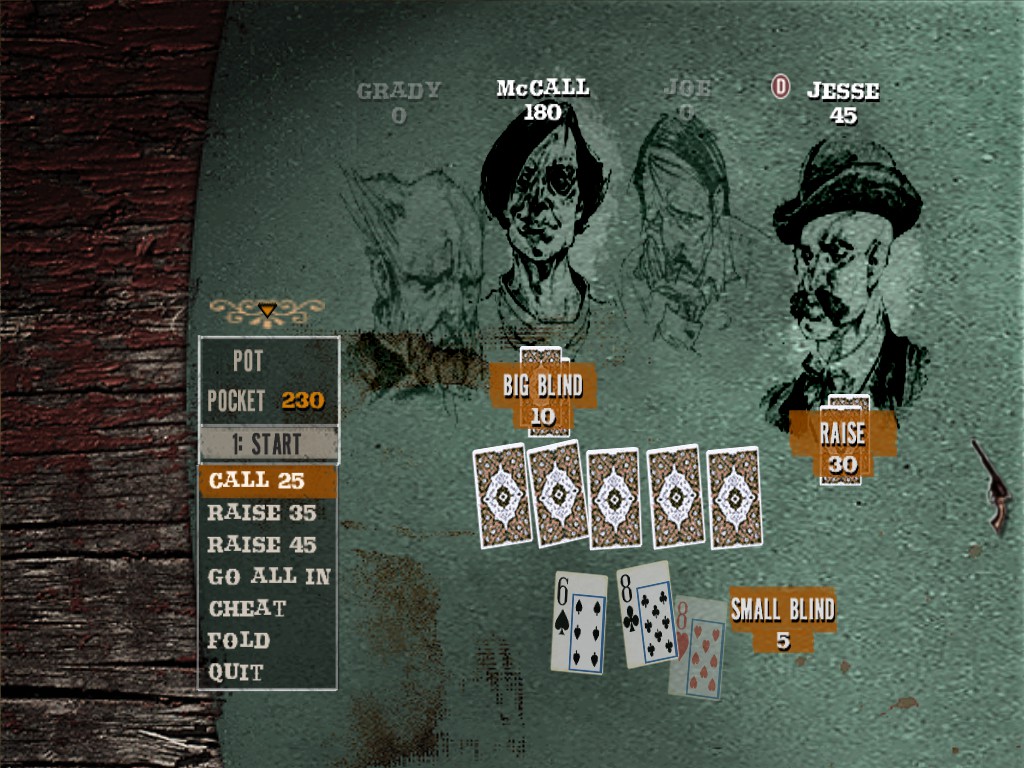 A card minigame where you can cheat by changing cards on your deck. (And I've never ever get caught doing it, oddly enough)

In retrospect, GUN is a pretty decent game for me. While it does have impressive production values that almost rivalled the GTA games in terms of presentation and gameplay, it's just a shame that there's so little content and replay value to keep players entertained, that it seems as if Activision and Neversoft blew all of their budget to make the game look and feel great instead of adding some more meat into the game itself. Another thing, which is a major issue amongst Activision-published games on digital stores, is that the game itself was quite overpriced itself, currently at the cost of USD20 (Or your regional equivelant). Which is absurd as most console owners who still have their PS3 & X360, and wanted the most definitive Western sandbox game yet could get a used Game of the Year Edition of Red Dead Redemption for less than that, or add a few dollars for a brand new package.

There's little reasons for console owners to get this game other than the sheer curiosity of how an early Western open-world title would feel like. As for PC gamers, if you're willing to overlook its flaws and really wanted a Western sandbox game on your library (Not to mention the wait for RDR on PC were quite painful enough), I'd say it's worth experiencing it, but no more than half you regional equivelant on either Steam or GOG. 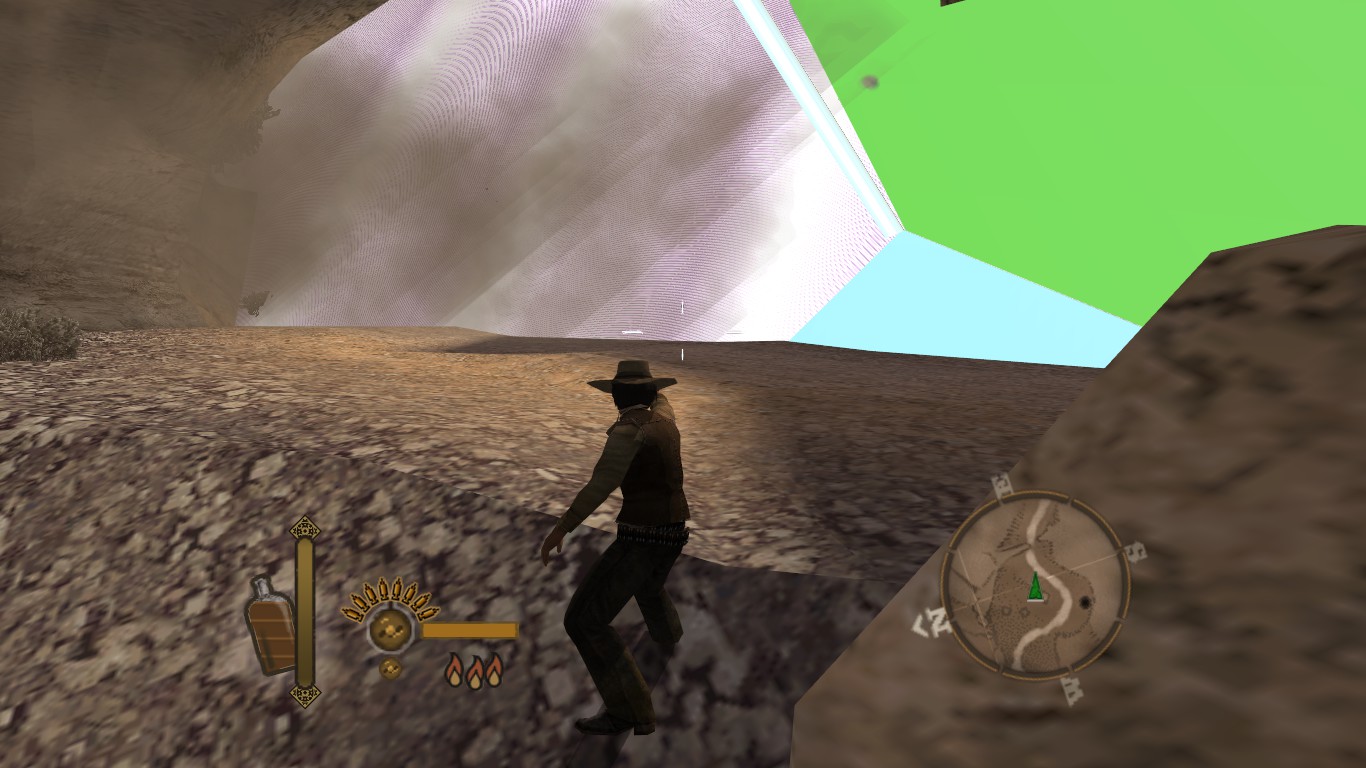