Koudelka is a horror JRPG developed by Sacnoth for the Playstation and published by SNK for its Japanese debut in 1999, with a world-wide release by Infogrames soon following in 2000. It stars the titular Koudelka, who is a medium drawn to the Nemeton Monastery in Wales by a strange premonition. There she soon runs into the thief Edward and the bishop James. Together, they explore the monastery grounds and try to survive while uncovering its evil secrets. 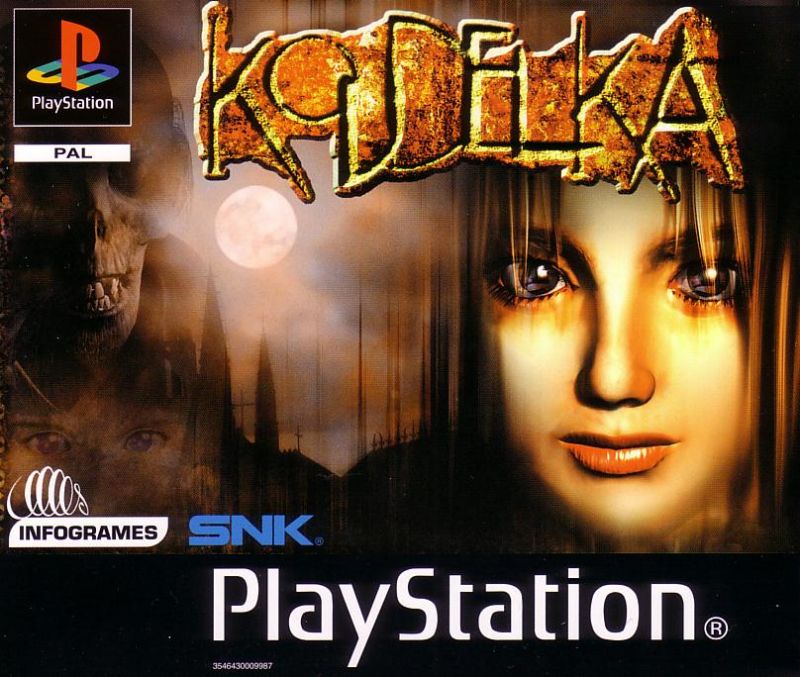 A Medium, A Thief And A Bishop Walk Into A Monastery...

Koudelka is an interesting tale. It's obviously inspired by Resident Evil to an extent (and was more like it before they had to make it turn-based), but manages to be its own thing.

What stands out is the quality of the voice acting and the well-written dialogue. Our main trio often get into somewhat long talks about what they find in the monastery and remain critical of eachother's backgrounds and beliefs throughout. There actually being some proper character animation in cutscenes is also a big plus.

Koudelka herself is rather snarky and is not beyond being downright mean sometimes. But she is determined to figure out what evil shit is going down, making for a nice protagonist. Edward and James often get into spats over religion, but even that is entertaining. Together they make a unique bunch, which I welcome in a genre full of stock character archetypes. 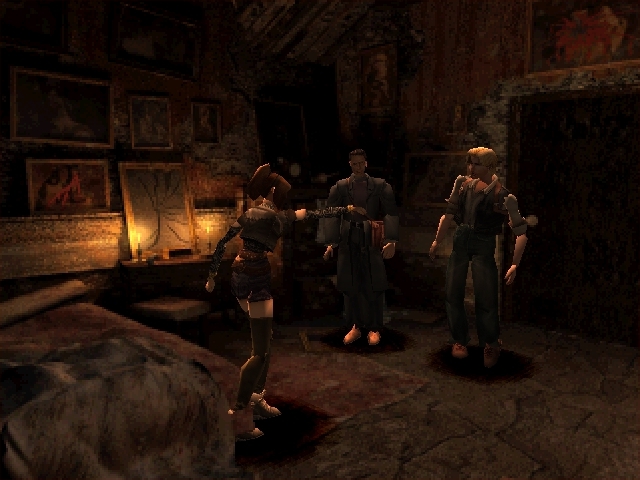 The overall plot isn't super exciting, but is told well and full of some good character moments, like Koudelka nd Edward getting drunk together. It does drag a bit if you don't keep the pace up yourself though. It's short for a JRPG, but long for a Survival Horror game, which makes it unique, but also feels a bit wrong. I still find it quite enjoyable nevertheless.

As a horror experience, the game is rather lacking. On paper, the game's content is horrific, but even with the numerous fancy FMVs (that push the game to four discs) and delicious pre-rendered backgrounds, it just isn't scary. The fact that combat is turn-based and that the game uses text boxes to convey monster attacks doesn't help matters. But I will give props to all the gruesome monsters you fight, as they are incredibly inventive. The music is also rather haunting whenever it makes an appearance.

In spite of being fashioned like a Resident Evil game on the surface, Koudelka isn't exactly a clone. You make your way (Without tank controls!) through what amounts to a spooky mansion, battling enemies, hoarding resources and solving puzzles.

But exploration is rather limited, the inventory limit is very kind, there are save points everywhere and actual puzzles are rather rare. It really is a JRPG in the skin of a Survival Horror game. The result isn't bad, but it's still a questionable decision. Maybe there are still some weird genre combinations out there that deserve trying. RTS and Beat-Em Up maybe?

Continuing the game's unique streak, combat isn't exactly standard. It takes place in a grid, which makes it so no one on opposite sides can walk past whoever/whatever stands furthest ahead in the opposing team.

You can't get past enemies, so you have to either kill them, randomly knock them back or use a ranged attack to get to the back rows. Seeing as it's a grid system I don't despise, it's natural to assume that it doesn't really affect the game much. The only thing it really does is let you have someone tank against melée attacks, which is sometimes useful. If they developed it a bit more, it could definitively have more of an impact. 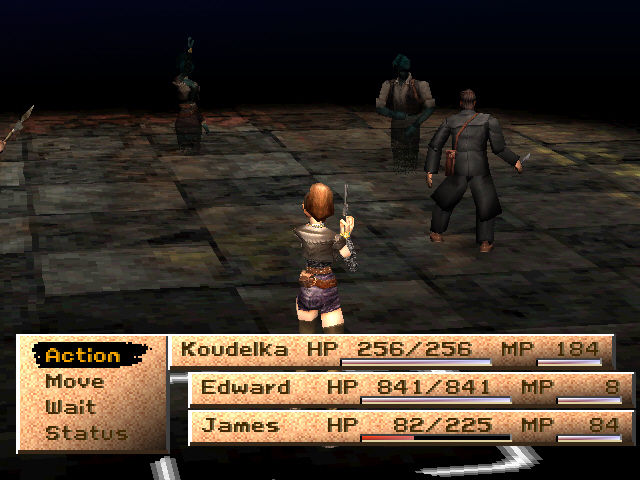 The next interesting point is how combat usually plays out. I find melée attacks (and guns) to be next to useless (sucks to be you, Edward), leaving the magic system as the go-to thing to use.

Every character somehow has access to all spells, except that they must level them individually. There's healing, magical attacks and buffs for every stat. The first two are pretty powerful, but the buffs have some interesting and basically game-breaking properties.

They work for every stat, but instead of providing a percentual boost, you increase the stat according to the level of the spell. So you can essential level up in battle as you wish, and it lasts until the end of battle unless an enemy debuffs you, which is very rare. And just to really make it ridiculous, you can use the same spells to debuff just about any enemy down to baby levels of threat.

While I am a man with the patience of seven saints, I do think most battles drag on for too long. Thankfully, the encounter rate is low and the game is full of new bosses around every few rooms, so spending more time in battle isn't terrible. But the game isn't optimized well and takes too long to swap turns and reload models after attacks, which is a major bummer. It really makes me long for a skip button, at least for enemy turns.

What's In Our Bag Of Tricks?

On the spreadsheet side of things, Koudelka has some fun things on offer. While characters have rather clearly defined roles thanks to their starting stats, you are free to level them up as you please. You'd be a fool for straying too far from the intended path, but it's a welcome option. You can easily engage in some Danger Mario shenanigans if you feel like it. 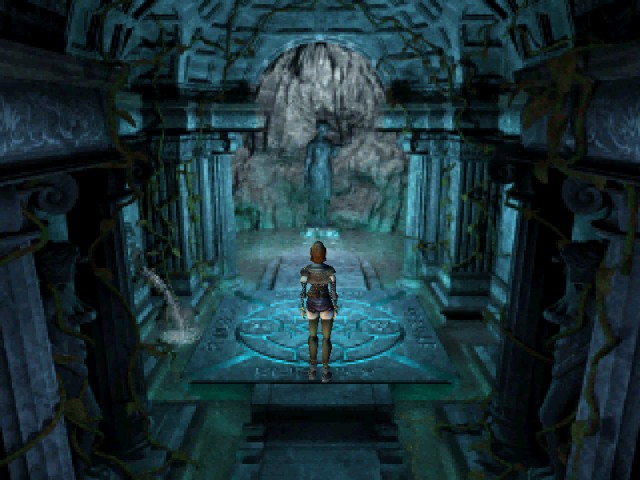 I don't have complete data on the matter, but it seems like the stats used for aiming attacks and magic are worthless dump stats for the most part. Luck is a pretty shit investment as well, as usual.

Since this seems unintentional, I wonder why those stats aren't more important to raise. It leaves you with extra skill points for the good stuff, but that just further unbalances the game. One cool mechanic relates to magic defence, as the lower you have, the more healing you get. So a character with high physical defence and low magic defence can tank for days, but gets put in critical health after just a few spells, but can be healed very easily. It isn't as important as it sounds, but it does lead to some interesting happenings every once in a while.

Weapons either require ammo or break after enough use, with the elements of most weapons being randomly assigned upon pickup. Since actually using them isn't that useful, I'm curious why they made the weapons with these weaknesses. If anything, the better thing is to get the spellcasters something that gets them a good stat boost and never attack.

Armor, on the other hand, is incredibly useful and difficult to aquire without outside knowledge. From what I gather, there is no armor to collect, so you have to bet on drops from very specific enemies. Thankfully, you can grind your way to some good pieces early, but chances are high that you'll never get any armor by just progressing normally, which feels like a huge oversight.

Lastly, there's the nature of the game's demented secret items. These are aquired by saving the game at incredibly specific times, possibly while also having a specific amount of items in your inventory. That's some shitty strategy guide fuel if I ever saw some. You'll NEVER find more than one of those things per playthrough, TOPS. At least the game is easy enough that you won't need them. Still pisses me off.