Drakengard 3 is a Musou-flavoured action game developed by Access Games and published by Square Enix in 2014 for the PS3. It's centered around Zero, one of the 6 Intoners of the world, godesses who bring peace through song. Only, Zero wants to murder her sisters, claim their powers, steal their whores and enact about half a genocide in the process. Fun, fun, fun. 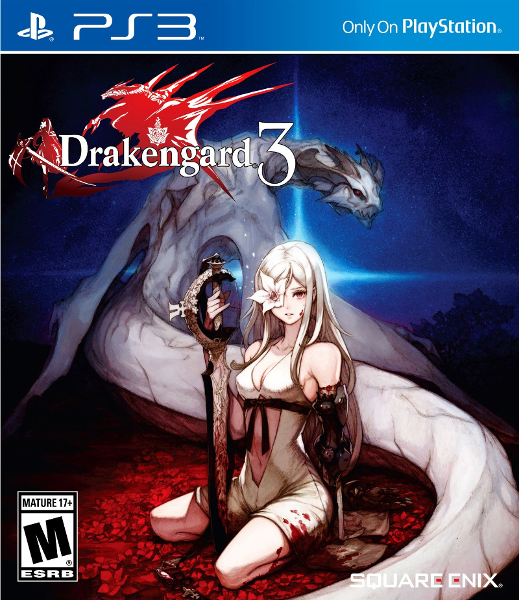 From Zero To Hero?

The plot of Drakengard 3 is a thing, let me tell you what. I'm not entirely sure just what kind of thing, but we might be able to come to a conclusion together. What I can say is that I quite like the overall plot, but the presentation leaves much to be desired.

The story is told in medias res, leaving you with a really angry Zero and a whole heap of questions, seeing as she stabs the narrator. Frankly, I wouldn't be surprised if many players find themselves hating her for being so angry and violent all the time. Then again, she also gets pissed about game design clichés, so perhaps not. It's impressive just how much she curses platforming sequences.

In any case, as the lies and deceit fade, you come to realise that the world is screwed 8 ways from Sunday and that her actions are mostly justified. Figures, seeing as the Drakengard world is supposed to be a fantasy world that matches the absolute boatload of murder you engage in during an action game. Frankly, the situation is downright Lovecraftian and awesomely macabre. A suitable prequel story to the grotesqueries in Drakengard 1 for sure. Even if none of the endings outside of the novel actually lead to Drakengard 1 properly.

Zero is fine, so is her relationship with her derpy dragon Mikhail. They bond a bit in spite of their differences, which leads to some fun stuff in certain endings.

The whores Disciples you accrue as you murder Intoners are a mixed bag. They're all rather one-note, save for the first one, Dito. Not only is he the one you spend the most time with, his dialogue (consisting of relentless sociopathery) is the most diverse and he gets a starring role in one of the ending sequences.

The rest drive their gimmick (masochism, nymphomania, narcissism) to the ground and grow boring very quickly. They're just a joke given waaaaaaaaay too much screentime. And for being presented as the mechanics of the Intoners' undercarriages, the sex part of the equation is rather undercooked. It's there, has a reason for being (hidden in some side material) and fuels the impressive amount of dialogue in the game. I guess I just expected there to be more of a payoff. I can easily imagine a reason why the Intoners would be lustful, but the game isn't being helpful in the slightest. At least there aren't any pedophiles this time.

The Intoners aren't much better, as in the normal game, they don't do much besides acting as bosses at the end of chapters. To get to know them, you need to play their DLC and and read the side stories that actually give proper insight into them as characters. And as characters, they mostly represent a sin and then die at your blade. Not the most thrilling stuff. If anything, it's a shame that the story is built around murdering one every chapter, leaving little room for complex interactions save for in the prologue and during certain ending chapters.

On the issue of presentation, I find the framing device needlessly confusing and the usage of extra endings not as good as I hoped. You're given a timeline that splits at arbitrary points with no good information as to why something happens and when exactly it does. The four endings might just be split at the start, seeing as you get to keep your Disciples, even when they shouldn't be around yet.

And the first three endings are remarkably similar, as they are lacking in clarity, leaving you wondering what is actually different between them.

We're Killing How Many People?

The murderin' of Drakengard 3 is standard stuff that manages to be acceptable for the most part. With the game's influence being clear, it should come as no surprise that you carve your way through countless dudes. It can be fun, but the lack of enemy diversity really harms the experience.

Zero is a mobile lass, sporting the ability to shred her way across battlefields in a respectable amount of time. You have a standard attack that can combo into a stamina attack for major damage. The stamina attack can of course be used in its own combos, and depending on the weapon, it might be best to do so. But as the name implies, they drain stamina, so you can't spam them that much. But the stamina recharge rate is thankfully fast, so you can actually use them effectively.

For mobility, Zero has a decent jump and a dash that can also be used in midair. The aerial game isn't that good (no fancy juggling to be found here), but it's there when you need it. I can't say the same about the lock-on system, which can't automatically pick a new target once the old one has been shivved 6 feet under. It also makes the the camera behave poorly whenever you lock-on to a big enemy, of which there are many. There's also really shitty block if you feel like wasting stamina.

Rounding out her abilities, you can switch weapons on the fly, which is nice. The four weapon types are balanced relatively well, save for the chakrams, which are stupidly weak, since the game doesn't have the multitude of weak enemies such a wide-hitting (and weaksauce) weapon demands. You're mostly up against regular soldiers, which are best dealt with using something a tad more powerful. Zero also has her Intoner (Devil Trigger) mode, which charges up at a respectable rate and remains useful throughout.

Mikhail can be summoned in battle, but unlike in older games, you can only do it whenever the combat designer want you to. So they might as well have cut out that ability and just reduced the amount of enemies to fight. Now, he does serve a proper purpose whenever you get to ride him.

Dragon battles are either freeform, or on rails, Panzer Dragoon style. Both are fine, but certain bosses really demand a lot of the player. Mikhail isn't as nimble as the designers seem to think and a few bosses are pretty bad at conveying that you're fighting them correctly.

As expected, Drakengard 3 has a few RPG elements stuck to it. The leveling system feels like an afterthought, as it only earns you a bit of extra health every time, which takes a while to become noteworthy.

The meatier system are the weapon upgrades. You pay a certain amount of gold and a material of a certain grade to upgrade a weapon. The way this system is designed really rustles my jimmies. The reason being that you have no idea what is worth upgrading, as the damage scaling isn't linear and certain weapons get roadblocked by materials you won't get access to for quite a while.

And to even get enough gold and material, you need to partake in the extremely lazy side missions. These almost always consist of reused areas and enemies slapped together into a select few types of missions that get old very quickly. And just to pour salt in the wound, there are a bunch that restrict you to the very weak chakrams, making for a bad time.

You Call That A Performance?

Drakengard 3 commits one of the great action game sins, as it's a trainwreck performance-wise. Frankly, I can't point to game of this ilk that runs this bad. Did I mention it was made by the Deadly Premonition people?

Loading times are long and the framerate dips hard constantly, even in simple cutscenes! There's even an enemy whose projectiles brings the almighty Playstation 3 to its knees and freezes the game for a few seconds!

At least the music is good.

Sing Me A Song, You're A Singer

All right, so I know it's rude to talk about the final boss in a review, but this fucker demands a discussion.

As a tribute to the first Drakengard, the final boss is a rhythm game. It's a beautiful and nonsensical sequence full of small touches related to the Intoners that showcases some good direction from madman at large the director, Yoko Taro. It's also complete bullshit!

When introducing a gameplay segment this distanced from the main gameplay, I find it important to make it simple so that the player can master it quickly and avoid repetition. Drakengard 3 throws this idea out the window.

The final boss is 8 minutes long (2 minutes longer than I think any real-time fight should be) and leaves NO room for error. One misstimed button press and your dead and have to rewatch the unskippable intro before getting to try again.

And the game does everything it can to make you fail. The camera flips out after a while, thus forcing you to go by sound only. The song itself is monstrous, as it changes its BPM every ”verse” and contains a few sections that demand like 6 or 8 half beats in a row. Let me tell you, my fingers are not built for that. And just for shits and giggles, the song continues into a cutscene, making you think you've won before it kills you with a fucking Kaizo Trap.