Mukashi mukashi -- as tales in Japanese folklore often begin -- I found myself sitting in front of an arcade cabinet in Tokyo. It had been a long two weeks of riding the rails across Japan with nothing but my limited knowledge of the local language and a backpack the size of a refrigerator. I'd finally arrived at a rain soaked Akihabara, exhausted, homesick, and really sore. As uncomfortable as I was, however, there was no stopping me from taking a seat in front of that generic white cabinet and glowing CRT monitor.

The game that flickered from that monitor was Kiki Kaikai, a game I was familiar with, but would never have encountered in the wilds of my home country. I had, instead, become familiar with the license from playing a localization of the first SNES title in the series, Pocky & Rocky. I'd rented it numerous times in my youth and played it with my ever-patient mother.

Here I sat, many years later, before its progenitor, ready to consummate my love with it. And like all the best consummation, I was damp, exhausted, and satisfied at the end. 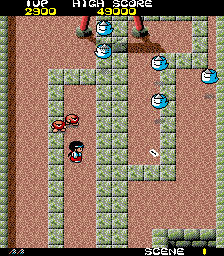 To experience Kiki Kaikai as I did, strain your back, soak your pantlegs, and fill the room with cigarette smoke. (Image source: mobygames.com)

The 80's were a rough time for female protagonists in video games. Sure, Metroid was a high profile release with a lady hero, but how many other games from the 80's can you name with female leads? The Guardian Legend? Athena? Barbie for the Commodore 64? Slim pickings.

In 1986, Taito released Kiki Kaikai into Japanese arcades. Starring a Shinto shrine maiden, Kiki Kaikai was designed to be a friendlier take on the top-down run-and-gun shooter formula popularized by games like Commando and Ikari Warriors. A run-and-gun cuter, maybe? Get it?

Rather than play as some generic army dude, you step into the geta sandals of Sayo-chan, the aforementioned Shinto shrine maiden, also known as a miko, who combats various spirits by hurling ofuda scrolls at them. That may not seem exciting from the outset, but Sayo-chan has deep pockets and fast wrists and can fling those scrolls out in 8 directions as fast as you can hit the button. She can also bash enemies or block their projectiles by swinging her oharai wand.

The story involves Sayo-chan attempting to rescue the 7 gods of luck, who had been kidnapped by monsters. The monsters, known as goblins in the English versions, are a mix of yokai and obake found in Japanese folklore. Common enemies include long necked women known as rokurokubi, and jumping, one-eyed umbrellas known as kasa-obake.

The initial arcade game is a fun, but rather drab experience. The classical Japanese music is excellently composed, and the action is decently fun, but it's not exactly mindblowing. If you're still interested, it is available on the PS4 as an Arcade Archives titles.

There were a couple home versions for the PC-Engine and MSX2 systems that were largely simple ports of the Arcade original. There's also a version for the Famicom Disk System that was entirely different, featuring a maze-like overworld, shops, and a day/night cycle. It's weird, but having been released in 1987, it's also a bit rough. 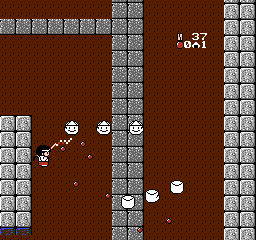 Kiki Kaikai almost became a one-off game for Taito, but in the 1992, Natsume scooped up the license and produced their own sequel for the Super Famicom, Kiki Kaikai: Nazo No Kuro Manto. Surprisingly, it actually got sent over to North America as the oddly named Pocky & Rocky.

Sayo-chan is known as Pocky in the localization, and she's teamed with a Tanuki named Manuke, renamed to Rocky the Raccoon. Aside from the characters, the rest remains the same. The monsters have gone insane again, under the influence of a shadowy character, and our beloved shrine maiden jumps in to save the day.

Contrary to the drab appearance of the previous two games, Pocky & Rocky is an extremely colourful and vibrant game. The gameplay is mostly similar to the original arcade title, but there is an added health bar and the ability to slide to dodge enemy attacks. It's also a lot more frantic and generally more difficult. You're given unlimited continues, so it's possible to reach the end with a bit of persistence, but it's certainly a challenge.

I was fortunate enough to have played this with my mother when I was younger as the occasional rental. The multi-player is simultaneous this time around, with one player as Sayo-chan and the other as Manuke, and it really works well as a co-op run-and-gun. Images from the game stuck in my mind for years until I finally picked up a copy as a grown-up. 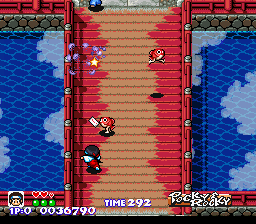 The first SNES title brought a lot of colour into the series, as well as other improvements (Image source: mobygames.com)

Natsume didn't take long to bring a follow-up to the SNES. Kiki Kaikai: Tsukiyozoushi, or simply Pocky & Rocky 2, came out roughly two years after the first, but rather than simply being a rehash of the previous game with some new bosses and levels, the whole game has been rejiggered in many ways to make it a familiar but new experience.

The main difference is that the second player character has more of a accessory role, and even when there's only one player, the supporting character is CPU-controlled. Rather than only Manuke being available, there's a slew of supporting characters, with more being unlocked as the game progresses. The secondary characters each have their own abilities which not only affect combat, but can also gain access to secrets. Rocky can find hidden treasure, for example, and Little Ninja can pick locks.

This is actually a bit disappointing. While Pocky & Rocky put you and a second player on an even field, Pocky & Rocky 2 makes it obvious who is the dominant one in your relationship, especially since you can throw the partner as a weapon.

Overall, though, Pocky & Rocky 2 was a worthwhile follow-up. Which of the two SNES games is superior will largely fall to personal preference.

I never really knew that Pocky & Rocky 2 existed in my youth. It never landed on the rental shelf, so I didn't play it until I picked it up over a decade later. 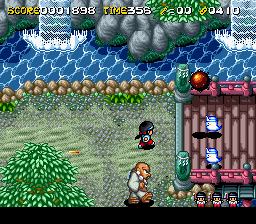 The sequel changed the experience in some significant ways, but it still remained true to the series. (Image source: mobygames.com)

The series would go dormant for a few years before re-emerging on the Gameboy Advance in 2001. Simply known as Kiki Kaikai Advance or Pocky & Rocky With Becky (seriously).  The game reintroduces Miki-chan (renamed Becky in the english version), who was the second player character in the Famicom Disk System version of Kiki Kaikai. She was actually based off Japanese idol, Miki Ito and was a palette swap of Sayo-chan, as she is here.

It's unfortunate that this version was the only one to see a release on Nintendo's Virtual Console, since it's easily the weakest. The graphics are nearly as bland as the original arcade release, it lacks multi-player, it's a lot easier, and it's incredibly short. They also added special abilities to each of the characters, but the power-up system is so cluttered you're unlikely to get much use out of them. It's not terrible, but it's a poor effort for the series. 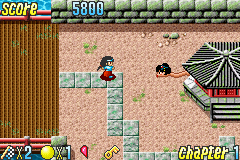 That's it. The series ended in 2001. The 2007 game, Heavenly Guardian, was intended as a new entry in the series, but it was largely stripped of its original identity when it was published.

Is that the end of Sayo-chan, or could we get a sequel? It's possible. Natsume recently released an updated version of Wild Guns for modern console, and it could be argued that it had as high a profile as the Pocky & Rocky series, and they actually share a designer. Technically, though, Square-Enix, the new parent company of Taito, owns the franchise. Maybe something could be worked out, but who knows.

Personally, I'm hopeful for a return of the series. Sayo-chan is an excellent protagonist, both cute and in command. She was a rarity in the 8 and 16-bit eras; an equal next to Johnny Explodenmaim. The world could use more card-slinging shrine maidens these days, so fingers crossed that she's not left to languish in obscurity. 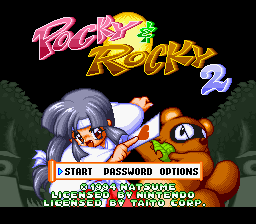