It's A Secret To Everybody #5: Super Robots 'n Ghosts 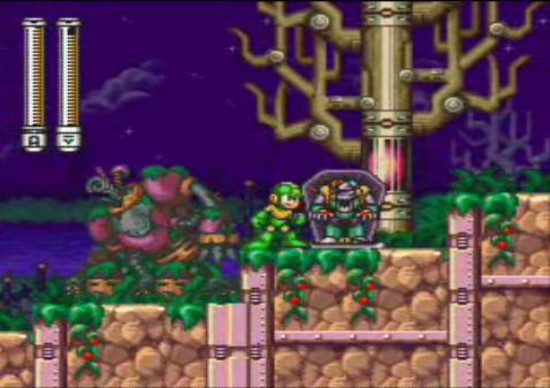 Coffins popping out of the ground and releasing zombots in a Capcom game on the SNES. But...

How Do You Get It?

This doesn't work if you've already defeated Shade Man and are repeating his stage to collect items or for shits and giggles. Highlight Shade Man's portrait on the Stage Select screen, and hold B and press Start to start the stage. You'll notice the boss introduction theme will have changed a bit, indicating the code is succesful.

How Awesome Is This Secret?

Above, Shade Man's stage with the usual song playing.

Below, the secret music.

It's a remix of the graveyard music from Super Ghouls 'n Ghosts! (In case the article title didn't give it away.)

The boss intro music is also a remix of the short jingle for the map screen that is shown before you start a level in Super Ghouls 'n Ghosts.

I'm a real sucker for secret cameos. Hence my love for recent Nintendo games, which all seem to have at least one throwaway reference or two to some other big series of theirs. Back to the point, I wonder how the thought process at Capcom went with this one; at what point did someone decide this was going to be in the game? Did the zombie robots make it in as a clever nod, and then someone decided to go the extra mile and add the remix? At any rate, both elements combined result in a smile from me.

On a somewhat related note, check this out! Awesome.

Previous Cases
#Community
Login to vote this up!