As a visual style, 8-Bit graphics continue to mean something to gaming culture.

I think of 8-bit graphics as the video game equivilant to cubism. It's a style that may have started from artists' inability to do "better", but is now actually chosen over more technically demanding, realistic looks for it's uniquely charming properties. Over the past ten years, many big name games have featured the return of the 8-Bit look including Castlevania:Harmony of Dissonance for the GBA, Me and My Katamari for the PSP, and Super Paper Mario on the Wii. Now, Mega Man can finally be added to the list. 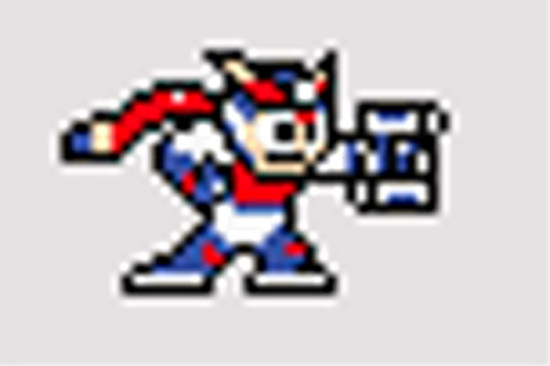 This rendition of the 8-Bit Mega Man is sort of a mash up of the original NES Sprite and Mega Man's latest incarnation on the DS, Mega Man Model A. For those that don't follow the Mega Man games anymore, Model A is the protagonist of the latest side scrolling platforming Mega Man game Mega Man ZX: Advent. Advent is a decent game, but I personally haven't really felt any true affection for a Mega Man since the 8-Bit days. The Mega Man X sprites on the SNES come close, but every other Mega Man sprite since the original just seems like an cheap imitation.

It's not that I prefer the original Mega Man character design. It's the actual sprite that I like. Trying to improve on it in the 16-bit and 32-Bit eras was folly. Would Bart Simpson look better with more realistic spikey hair and over bite? Would the smiley face icon sell more hippie paraphernalia if it had realistic blood shot eyes and yellow hippie teeth?

And for those hoping to pursue playing Mega Man's latest 8-Bit adventure themselves, check the wiki on Mega Man ZX:Advent for the multiple methods to unlock the character in the game. For once, Wikipedia is actually a better resource than GameFaqs for game info, as it has more complete and correct info on how to unlock Advent's secrets.

And don't forget to enter my Capcom characters in Smash Bros Brawl Drawing/Contest.

Sprite sheets attached for those who like it nasty.
#Community
Login to vote this up!