Killzone is a first-person shooter developed by Guerilla Games and published by Sony on the PS2 in 2004. It also recieved a HD port on the PS3 in 2012 thanks to Supermassive Games. The game depicts the Helghan invasion of the planet Vekta and tasks the player with taking control of one of four ISA soldiers and fight back against the invading threat.

Space Nazis Are Bad, Yo

The idea behind Killzone is extremely simple. What if World War 2 (and a bit of Vietnam) shooter, but space?

The Helghast are colonists who have suffered defeat against the Interplanetary Strategic Alliance, and so, turned to fascist rule and super soldier experiments in order to win their freedom.

I definitively see the appeal of creating your own flavour of Nazi, since a historical setting only affords you so much freedom. But there isn't really much done with the plot. Now, I don't need much from a shooter story-wise, but I want to be gripped by something.

You have a choice between four characters, meaning that they all serve the same purpose in the story, making them incredibly generic. Hell, there's barely any red thread between the game's missions. You just plop down somewhere and get shooting. You're not even afforded any expositional intel beforehand.

It's just such a bore of a plot. Had the game alternated between the two sides and made the plot more morally gray, I think I'd be more on board. Some characters consisting of more than cardboard would also be nice. At least go for some colourful papier maché.

Who Poured Concrete Into The Graphics Pipeline?

Killzone was really ahead of its time. I can't believe a game this gray and brown came out in 2004!

From minute 1, you're just drowning in dusty and dull colours. Not even the Vietnam-inspired jungle mission manages to escape these drab pigmentations. I get that this is supposed to be gritty, but you can do that and still have an actual colour spectrum, as many shooters would later prove.

And even if this wasn't the case, the game is still a graphical mess. The framerate is complete ass just about everywhere and there's even Z-fighting around every corner! The tales of the game's rushed development better be true. Thinking about the graphical fidelity of the online mode has me scared, as I doubt it could even match the campaign.

As if aiming to complete the unholy Triforce of craptastical awfulness, the game part of the game is bad as well. Fancy that!

Ignoring the framerate issues, the game is still frustrating. The kinesthetics are wrong all around, making it a chore to both move and aim. Modern games must have spoiled me, as the recoil of the standard ISA rifle feels laughably bad.

I'm actually glad that CoD standardized scope aiming, even if it makes many games feel similar. Here in Killzone, they just zoom in the camera in a janky fashion, which also puts the low-poly greyness right in your face. But the worst thing by far is the sniper rifle, which uses Timeplitters' horrible ”move the reticle to the side of the screen to turn the camera”-system. You had two sticks, Guerilla! And you use them properly for the other guns! 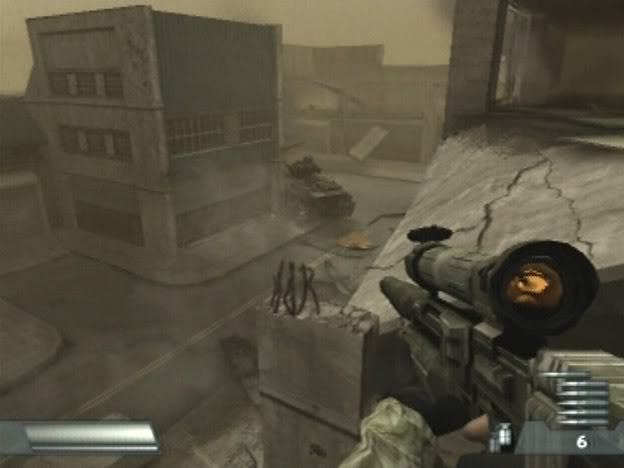 The enemies are also a shameful display. There's only a select few types of them and they love screaming loud and repetetive voice lines at EVERY OPPURTUNITY. Your allies also spew some really terrible and generic lines. But at least those aren't repeated en masse.

It feels like the game could be a parody of the genre with only a select few tweaks. And less AI bugs, of course. I should not be able to get into a staring contest with the space Nazis!

There are a few other points of interest. There's alt fires on most guns, which is always a fun idea, even if the grenades you shoot aren't very reliable. Same goes for the the regular grenades, which must be cooked if you intend to kill something effectively.

Health regenerates partially, but I don't think the checkpoint/healthpack ratio is balanced correctly. I get the feeling that you're supposed to hang back and suck your thumb much more than I want to. As a result of that, I died pretty fast.

The one good thing I can say about the game is that the controls are fully customizable, which is awesome. It's something I still want to become standard in the genre.