The Strike series is a product of its time. An entire game based on a single premise, that of a lone helicopter pilot raining hell on his enemies. Other than predicting the infatuation of Western developers with military settings, the series quietly retired into the sunset.

That doesn't mean the games are bad or anything. In fact, the strike games are known for frantic and tactical action. In this case, it should also be known for its hard as ball difficulty. 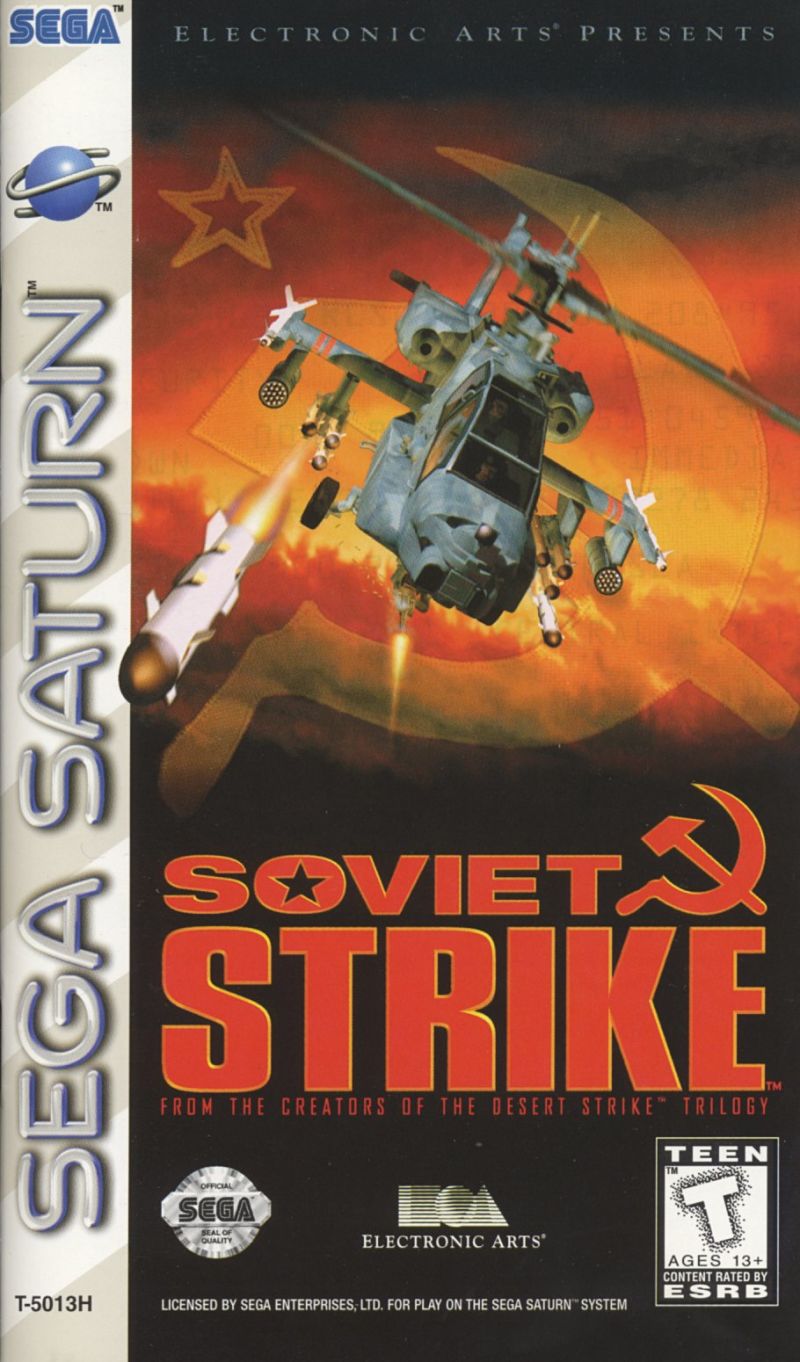 "We measure our success by the wars that do not happen"

As a step into the 5th generation, Soviet Strike went all-in with its story. Except, instead of in-game cinematics, it uses live-acted FMV scenes. The kind of FMVs headlines by bit-part actors that somehow fit their cliched roles.

I say cliched roles because the entire premise is born from 90's B-movie ideas.

Take for instances the character of "Hack". An African-American hacker who is depicted like the fresh prince with weird "hacking" googles. The entire dialogue between characters consists of catchphrases, to the extent that the entire script can be made into quotes. 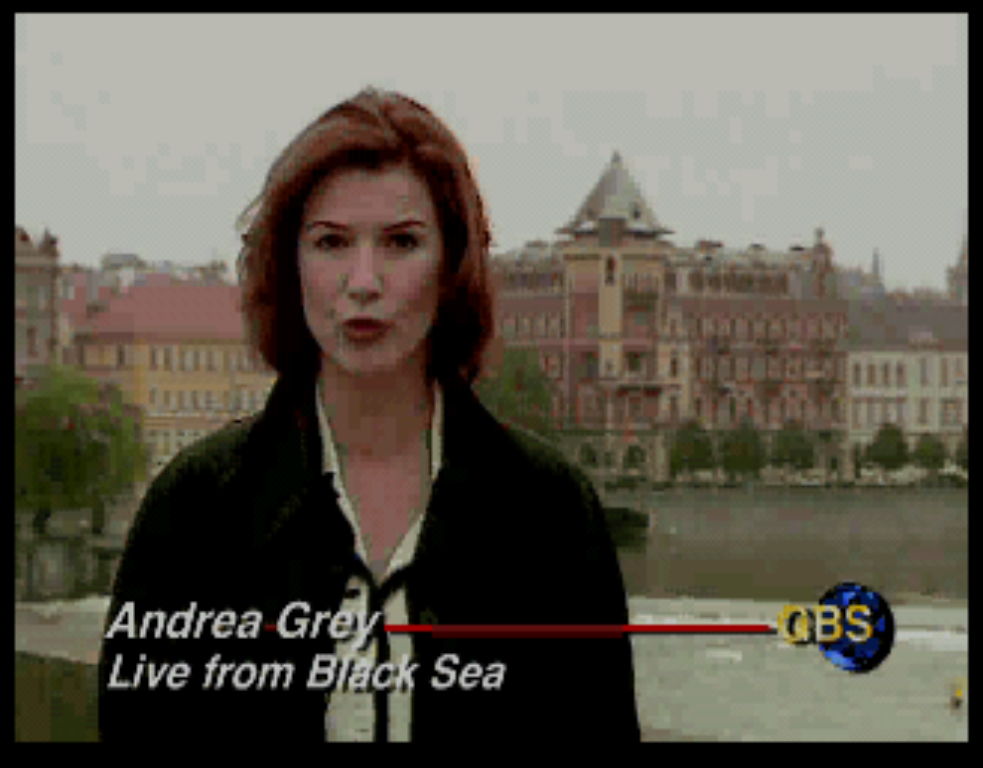 If she is live from the Black Sea, why is she not wet

Which is not actually a bad thing, as it gives the game an endearing B-Movie feel. If the acting was simply bad, it wouldn't have worked. However, in this case of over-enthusiastic bad acting, it feels right at place.

So what is all the brouhaha about?

This time, it is a typical corrupt Soviet general trying to plunge the world into World War III, and that's where Strike and the single chopper comes in.

"Remember. If you do not think, you will not win"

If you think this is just going to be a brainless shooter where you can march your helicopter around and rain hellfire against your enemies, then you are wrong.

Soviet Strike is hard as balls, and your enemies can ruin you in a matter of seconds. The enemy consists of foot soldiers, soldiers with rocket launchers, light tanks, heavy tanks, anti-air guns, helicopters, light gunships, big gunships, and even freaking submarines.

You have a single chopper. 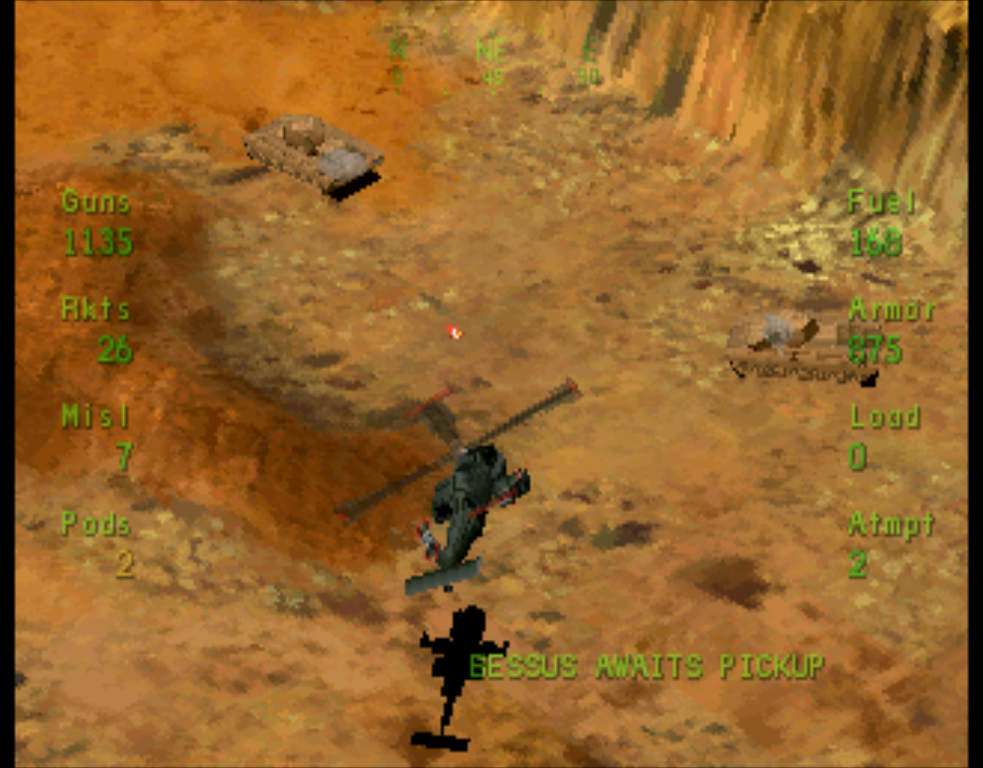 A Single Chopper of Death

Thankfully, the extensive intelligence apparatus usually does a good job. For each of the game' five levels, you have several missions. The level of detail that went into the briefing for each level's objective, each mission's goal, and what your enemies have in store is amazing. You would think that just by absorbing all that information, you would easily have the upper hand.

Coupled with that, your allies have spread some resources in the level to help you out (but no other chopper).

Even then, they offer  lots of support as each level changes due to some scripted emerging objectives. It gives you a clear pathway through the level (which you can ignore to your peril), but also adds a feeling of tactical depth.

Still, you are only one chopper.

This single chopper is equipped with a light gun, two kinds of missiles, and drop-able bombs. IT controls well, with a tight control scheme and high agility. However, I found trouble aiming, with the guns shooting haphazardly sometimes.

While this contributes to the game's difficulty, it is not the prime culprit. You see, in the game, there are three resources that you need to keep an eye for. Your ammo, your armor (health), and your fuel. So, while you navigate the level, you will need to frequently recover one or two of those meters.

Since there is a finite number of resources in each stage, this can put you in unwinnable situations whenever those resources are depleted. While this can be considered part of the game's challenge, the fact that it is impossible to predict what you are facing (despite the excellent Intel) makes resource management a matter of luck. 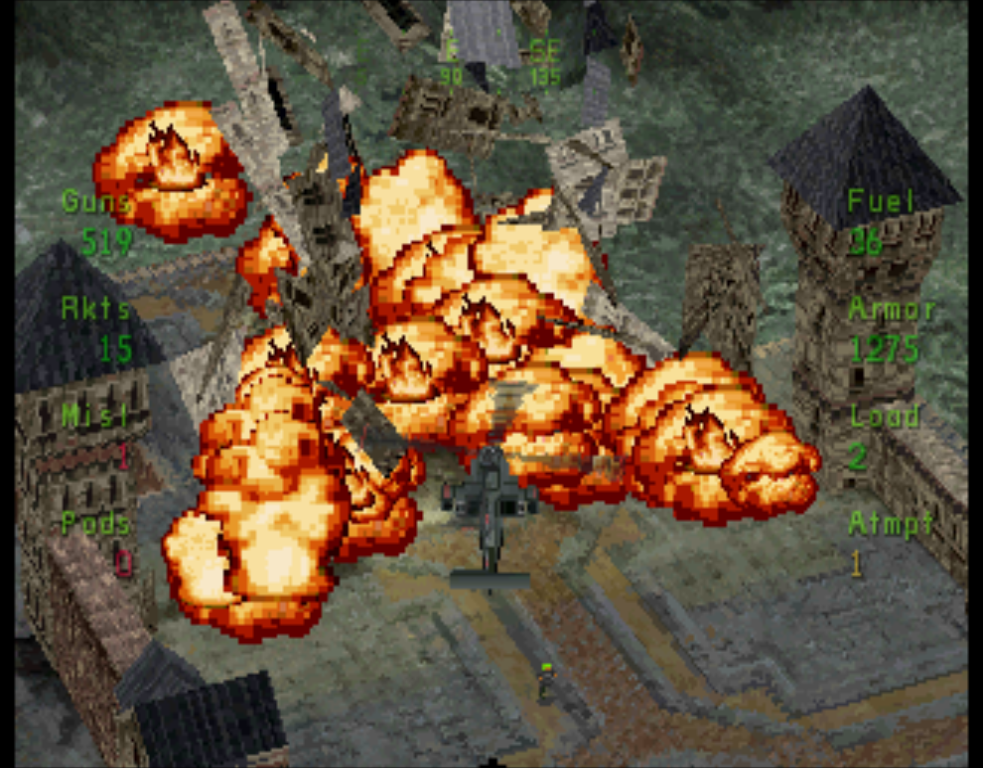 In fact, there is always a singular path of success that you can take, and it requires multiple playthroughs to discover. This is not a case where you play the game multiple times to get better at it. It is a case of playing it multiple times in order to just beat the damn thing.

Because of that, the level of stress is always high, and not in a good way. I am never sure if I have enough resources, and an unexpected emerging event may kill me off. Worst of all, it stops being fun, and is just a pain to play.

And you are only one lonely chopper.

"The way I see it, the only good enemy ship is a burning enemy ship"

Graphically, the game is, in my opinion, a step down from the 16bit Strike games. The 16bit sprites are more colorful and defined, and the game pops with more color. Now, the environment is drab, and the polygonal models, while not exactly ugly, are a downgrade.

It is significantly better-looking on the Saturn compared to the PS1 though.

As for the FMVs, they are simply live-action clips, and EA wisely chooses to go with that easier option instead of trying to use poor CGI. The B-Movie style of acting and FMVs work for the game. Soviet Strike is generous in using those scenes for every part of the mission briefing. 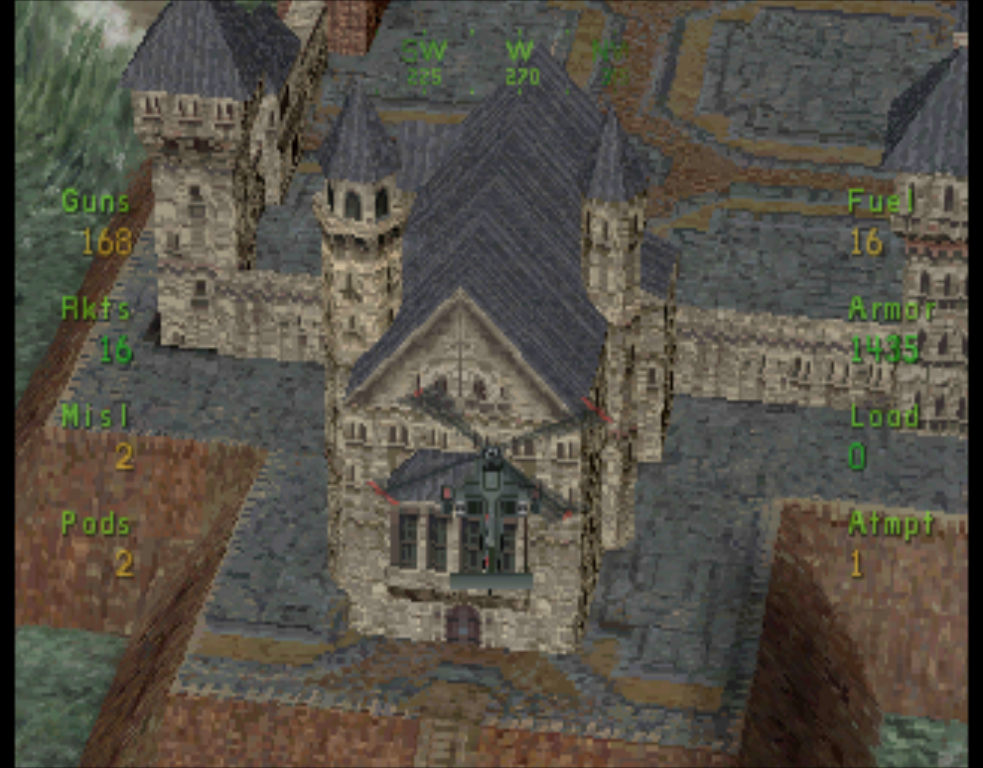 Like with the graphics, the game's audio is lacking. The soundtrack is almost uniformly poor and/or non-existent. That at least gives you a chance to appreciate the decent sound effects.

And the sound of that single lonely chopper.

It is ironic that Soviet Strike's biggest flaw may be its biggest draw today. The fact that it is almost unfairly difficult may attract some real masochists.

Otherwise, the helicopter action games the series popularized have already declined into oblivion. These games were good for what they were; focused action games designed to keep you from reselling the game for as long as possible. 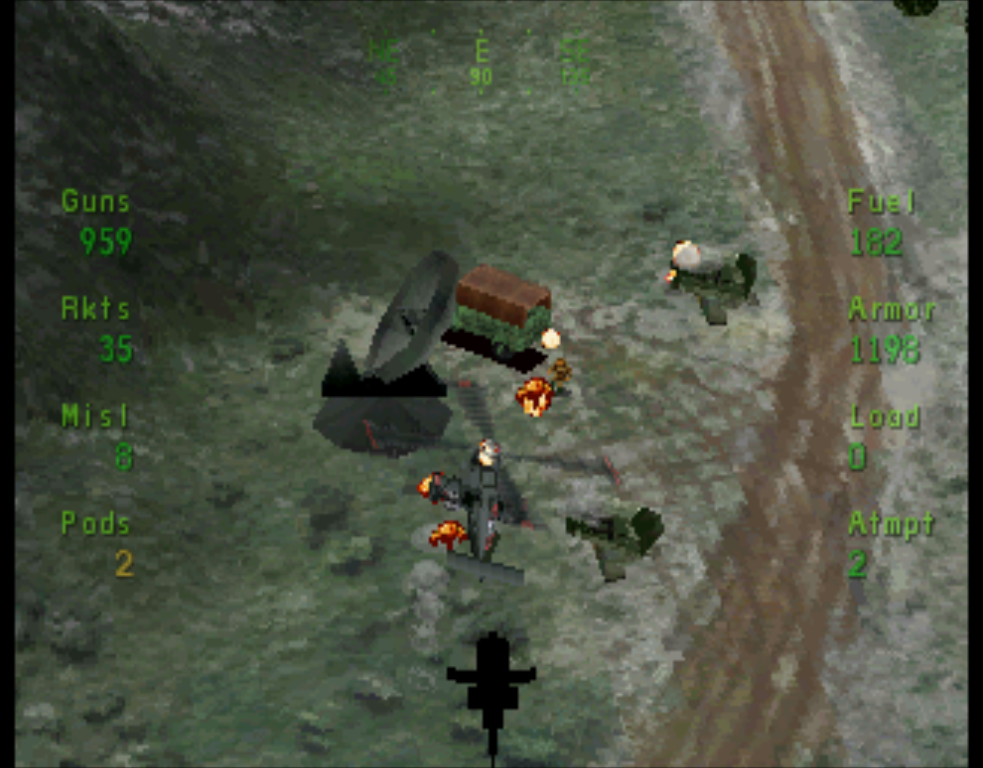 Try and not shoot your own supplies

1- Protect your supplies from enemy fire.
2- Finish your missions in the suggested order.
3- Save Ammo, Armor, and fuel supplies for when you really need them.
4- Save strangled allies to get some Armor.
5- Learn how to strafe fire often.
6- Learn the health of your enemies to know how much to fire.
7- If you fail, try and try again (which will happen often) 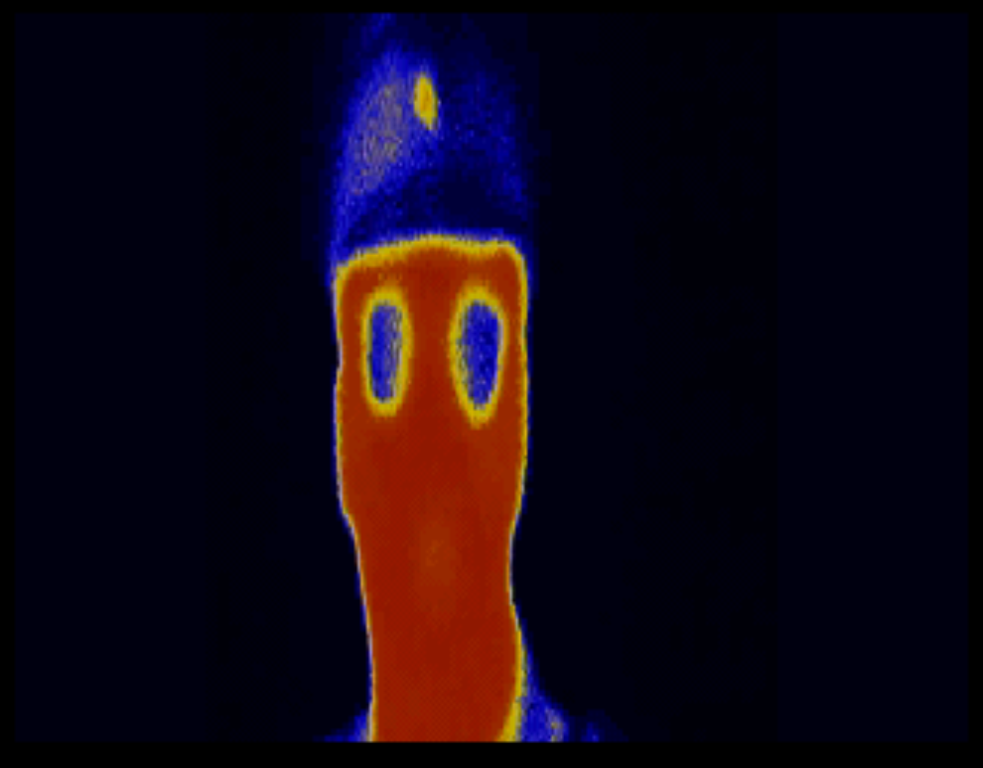 Desert Strike is the better game when compared to this one, even though Soviet Strike's cheesy story and presentation nails that B-Movie feeling (even if unintentionally). Mostly, the game was a pain to play, and I am glad I am done with it.