So my producer friend got me a free ticket to the Game On Expo taking place in the Phoenix Convention Center. It was an event that I was initially interested in going to because of games… But I am also between jobs so getting a free even pass was great.

Which I guess I should do a quick shout out to CineForge (Scott Conditt ) for helping produce the event and get me tickets ;D

Here is a short they did this year:


Not only did they help cover the event costs but they did live streaming for out of state participants, do interviews with the stars, and hosted a small video game related 24 hour film contest. A really cute short called Family Kombat won... I have to agree it was just too cute to not win.

Another thing to be excited about is their feature film ‘Max Reload and The Nether Blasters’ They don't have an offical trailer yet so I will link the Kickstarter for now.


that has been completed and is getting ready to be released sometime in the next 6-8 months.

Anyway, I have never been to a gaming expo so I really had not clue what to expect. There were tons of things to look at so I will bring on the many photos I took with my iphone. I did not have a media pass so I thought it was for the best not to risk it and not be able to come back next year.

Right off the start I ran into two versions of Vitual On cabinates. I saw that this place was of great culture as well. I remember back in the day when my father and I went to roller skating place and we played Vitrual On more than actually skate...

They were tech demoing their latest game Sydney Hunter and the Curse of the Mayan:

I have never seen this game or heard of this devloper before, but I guess they have been kicking it on the homebrew scene for the Colleco Vision and recently started devlopement on a modern game that is being built on the Unity Engine... Which is coming to every console.

They were also demoing their Super Nintendo Game: Sydney Hunter and the Caverns of Death:

Ultimately Sydney Hunter is much like an Indiana Jones and the Temple of Doom, Castlevania, and Spelunker mixed up into an action plat forming game that could be comparable La Mulana but even cuter some how.

From there I went to watch the Classic Tetris Tournament:

There was simply too many people out of my leauge... Though I am sure Vxxy would be at home there bringing the pain.

I saw a Killer Queen in the wild... So I played it.

Well what can I say about Killer Queen? It is one of those games that look utterly terrible until you try it. In the same relm of Joust and Sports Ball, Killer Queen is a very competive game. It has many moving parts as 10 players compete head to head to accomplish 1/3 tasks. Any of them can lead so success but it only takes the other team to get one to win.

I lost a lot as the other team was consistantly wining by economics or snail.

I have never seen arcade cabinate like that, and many people were rushing up to give it a try. I cannot wait for the Switch game as I think I am hooked and will need to go to my local video game dive bar to join up with the local league.

This was the most expensive game I could find at the expo... Not entirly sure why it is above $1500, but it is a fun Sega CD game for sure.

I ran into Splitgate on the open floor. If you took an arena style FPS with halo style health and jetpack system and threw in portal abilities... You get one crazy mobility shooter.

I got to test it out and it instantly clicked with me just all the crazy combos you can do jumping across the map with momentum portals. Thankfully the devs included a limited jet pack for slight coarse correction inbetween jumps. It really filled any sort of need for a shooter like Halo on PC and managed to make the game even faster and completely change your play style.

It would have been neat to see wall running and stuff from Titan Fall come into the mix... but you cannot have everything.

I have never seen the box in real life and I love this game... I did not buy it but honestly there are no better Shmups on the SNES than Space Megaforce.

So the next developer I ran into is Wicked Cake Games, a local devloper who was showing off hteir game Shadowcrawl:

Imagine if Rouge was updated. Imagine if it had sprites and tiles that could fit multiple enemies. Add in tons of mechanics that can trigger at almost any time that dramatically changes how you play the game. Shadowcrawl is a completely re-imagined Rouge game that is not afriad to explore options that were not avialible in other games. Like what if you stole a sacrafical knife from demons? What if you got asorbed into a meat collective and needed to kill enemies for meat to survive? What if you keep killing the same monsters with flames and they suddenly evolve?

I got to talk to the lead devloper Alex Osuna about his game. Not only can you just clear floors like in classic Rogue, but there are tons of side quest on side quests that have crazy but fun twists to the game.

There is a glitch god that looks like missingno, that if you worship too much will turn the game into a glitch mess.

I was really impressed with the video options to emulate classic CRTs. (don't worry there are plain modes too) Most games have those but the amount of detail was crazy as he programed in synic issues that give the game a much more true CRT experince than most games like to emulate... Really showed off the out of the box style of thinking that this game provided.

If you are into those types of games I would highly recomend it. It is currently on sale for $6.66 on steam as it just launched recently and then it will go back up to $10.

I ran into local Game Designer Justin Carter and talked to him about his game Negative Space.

It is a puzzle platfroming game similar to Box Boy as you play as a box that can jump and change pallets to cross-spaces and make it to the goal. I found it to be prertty fun, and it got pretty challenging as each level passed. Really pressed against how you felt space should act and force you to question everything.

Apparently he was pretty active in Destructoid back in the day and still checks the site every now and then.

Then I ran into the NES Maker Booth.

So basically it is the RPG Maker of NES rom makers. I did not demo the software but everyone was talking about it at the convention. Apparently it just launched the day of the convention.

But the concept of being able to make an NES game and publish the rom that would work on any NES is quite enthralling.

No support for a PC publishing when the game is done. But it still seem quite interesting for what it is.

I ran into 4 different Youtubers. 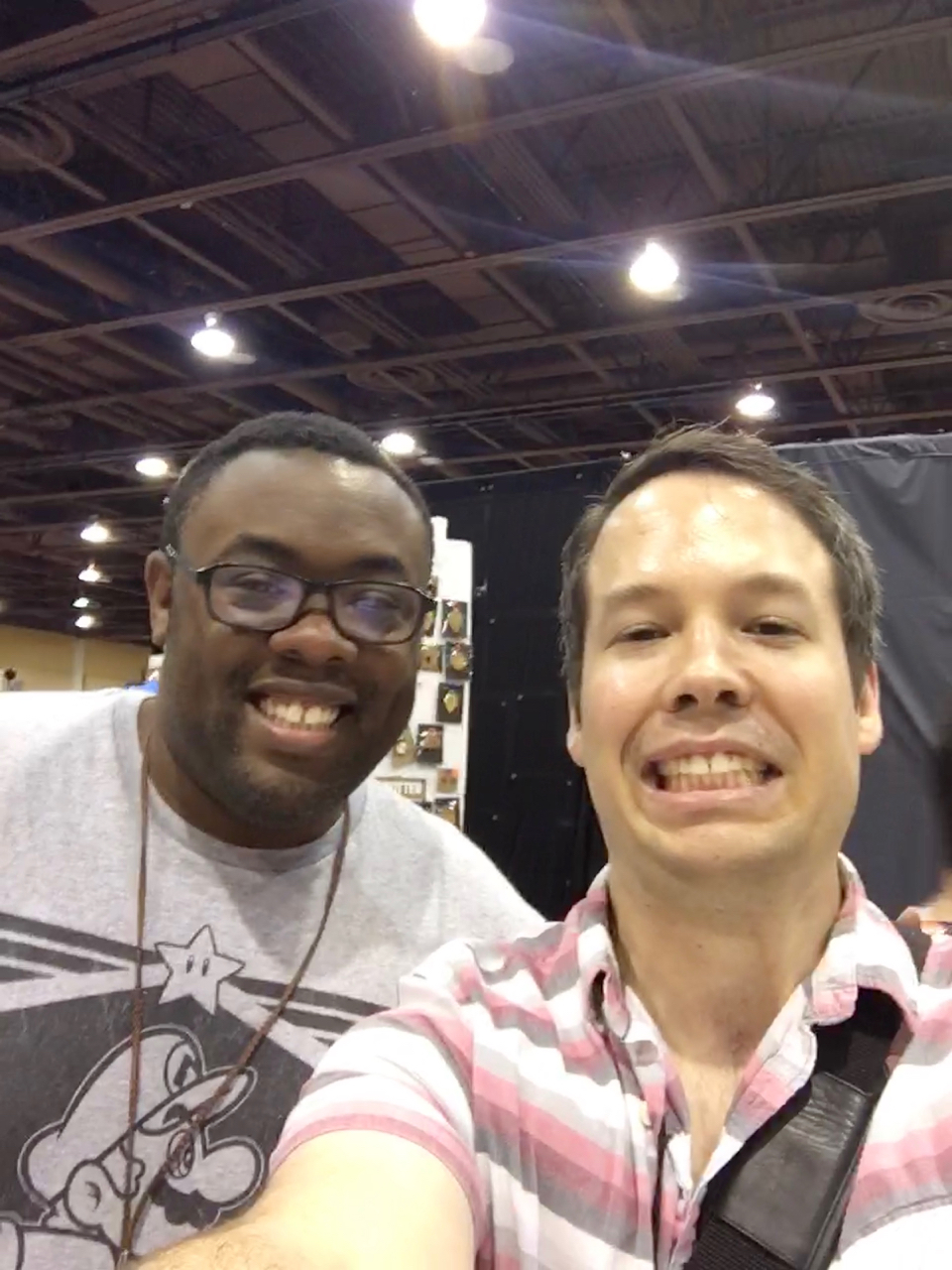 Man I was awkward, mainly because it is hard getting over seeing a person in Real Life versus a screen. But I was able to finally communicate and he was gracious to let me get a selfie and a signature... Like one smooth Donatello. 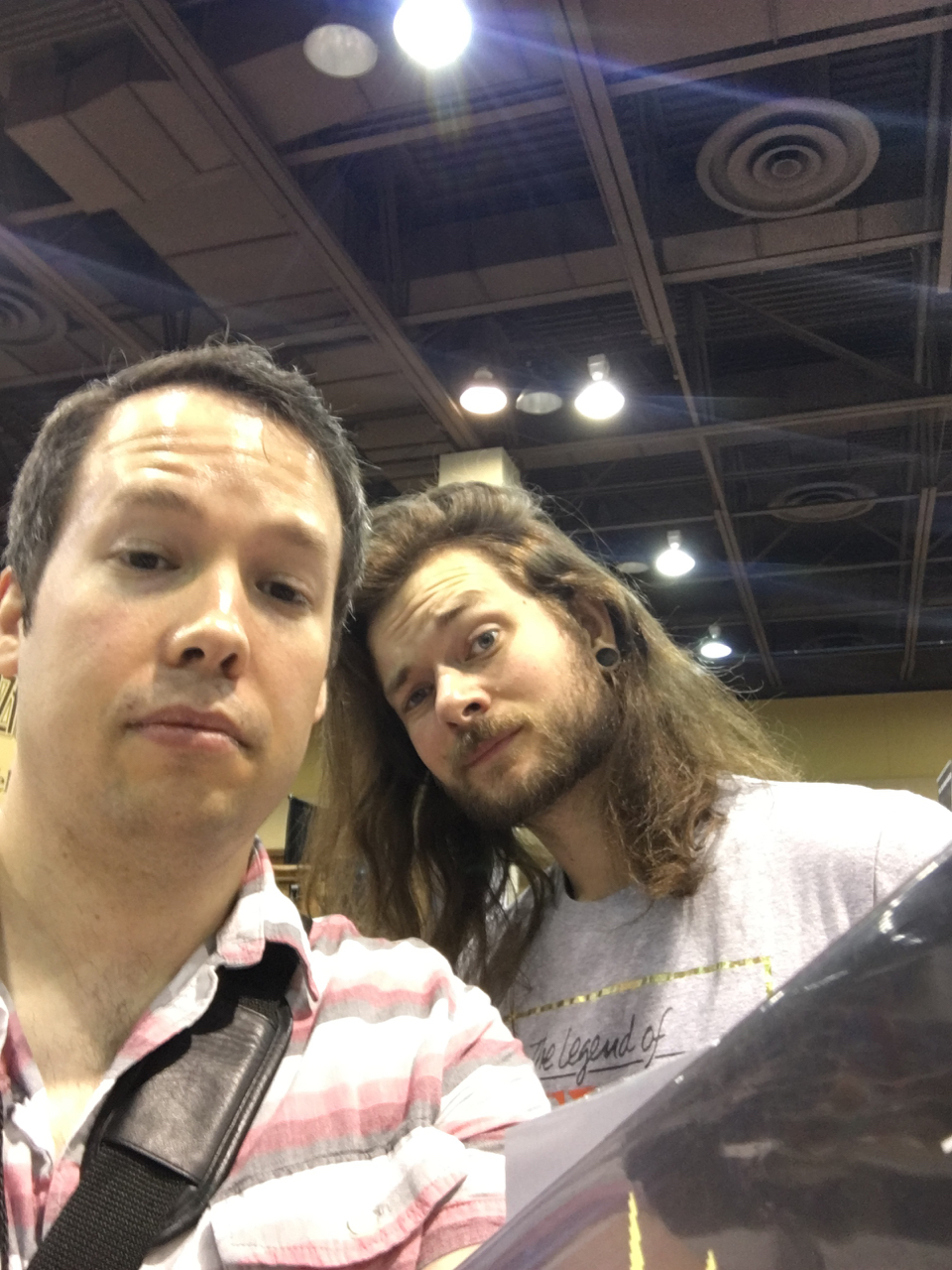 I met the guy from BeatEmUps, he was quite tired but he was willing to do a photo after a put my foot in my mouth as I was astounded how much taller and buffer he is in real life than on YouTube... I though the camera always added weight but I guess it just make him look shorter and skinnier than in real life. 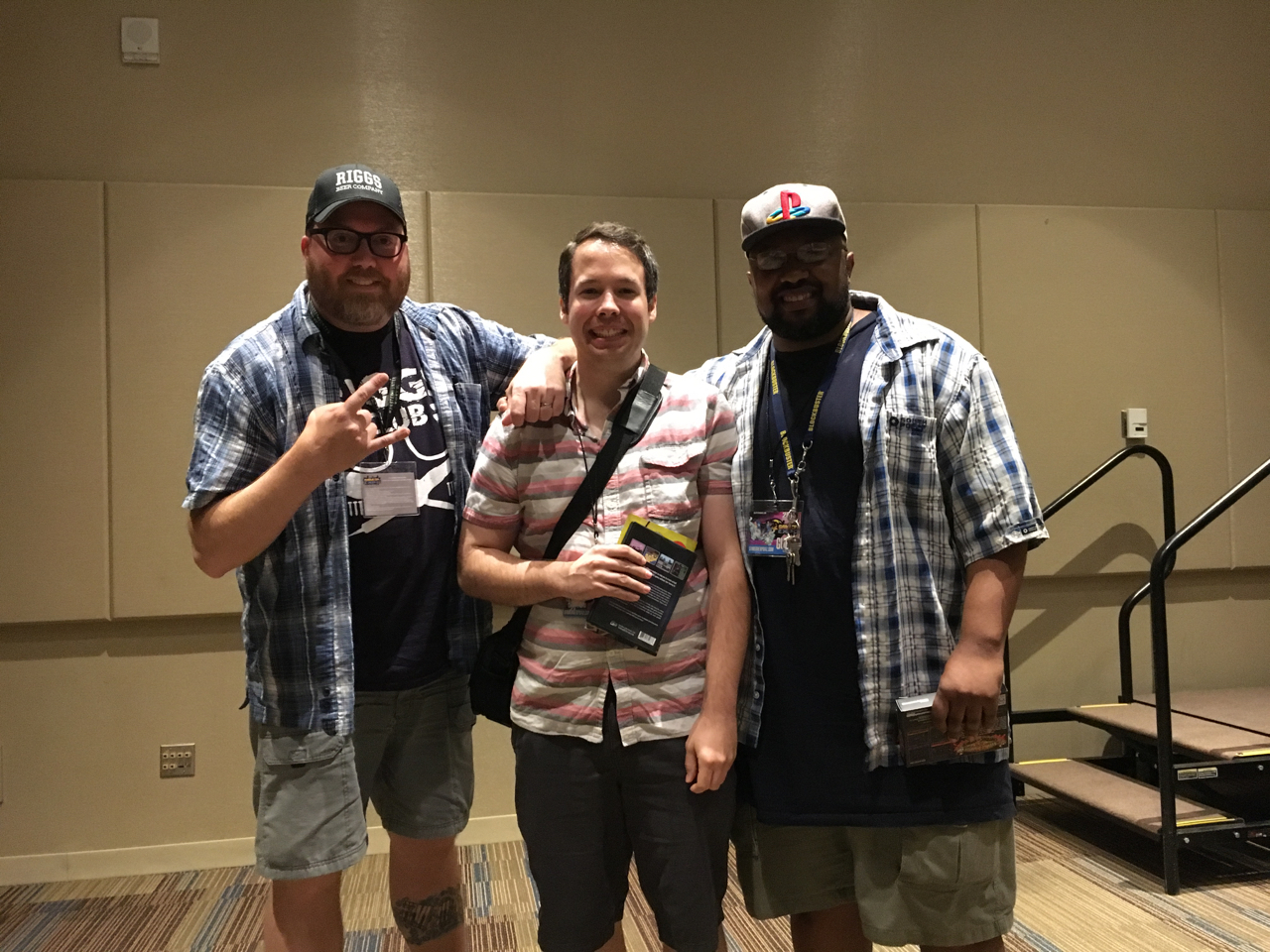 One of the few panels that I was able to attend was with Radical Reggie and John Riggs. Many they were really chill and Reggie had some hilarious stories about playing video games as an active member of US Military.

So I have more photos to come but I think this is were I will call it a day, coming soon part 2: