A warchief handles conflict, a militant creates it

(For sure Warcraft spoilers below. Enter at your own risk!)

War of the Thorns.

Everyone thinks they could have written it better. I'm no exception to that rule. Although I don't have a talented bone in my body, it doesn't stop me from criticizing those who do.

World of Warcraft: Battle for Azeroth comes out on the 14th of this month, and the pre-expansion event has upset Alliance and Horde players alike. It has even caused some players to harass Blizzard employees. Don't be that kind of fan.

What upsets me about the direction of this story is that I feel like Blizzard built Sylvanas one way during the last expansion and tossed her progress out the window in the upcoming one. Players have said, "What did you expect from her? Not to be evil?" And honestly, yes...kind of. There was a sign of hope in Legion that Sylvanas was fighting for somthing bigger than herself. She was becoming part of the bigger picture. It was nodded at when she accepted the title of warchief and the added responsibility that came with it. Even in the new BFA cinematic, there's this feeling she is fighting for the Horde, not just the Forsaken.

I heard the collector's edition book (with content that should have shown up in game more) tells that Sylvanas thinks that war is inevitable and that there can be no peace unless it is on the Horde's terms. So the writing around her suggest that she is thinking ahead or is in it for the long haul, and I interpret that as she cares for her faction.

"But Sylvanas went back to her conniving ways in Legion. She never changed! Just look at her backdoor dealings with Helya and how she tried to enslave the Valkyr."

Sylvanas is a long shot from being a hero. She is a character who is not afraid to do wrong in order to achieve something right. She is still driven to save herself and her people. But her selfishness is not mutually exclusive, it arguably benefits the Horde too. Her actions in Legion are what we call "morally gray." Selfish but understandble.

I just wanted to say there is a distinction between what Sylvanas is (what players didn't want) and what she could have been (what players wanted), because its important to know why people aren't happy. No one is surprised by her actions, just dissapointed at how obvious and disconnected they were. Before the burning of Teldrassil players were even making theories just because they didn't believe Blizzard would decide to take the predictable route.

Without further ado, and keeping up with angry fandom tradition, here are the two things I would have done differently to make this storyline better.

One of the hardest things for me to follow in the event was the motivation behind Sylvanas' actions. She wants to control the flow of Azerite in Kalimdor, and that requires taking over Teldrassil, I guess. (What about the Azuremyst Isles?)

We get the payout of the story, the juicy reward which is Teldrassil turns into basic campfire supreme, but there's no buildup to this big event. In the flashback into Sylvanas' past, I thought here we go. When she was turned into a banshee the Night Elves screwed her over somehow. We're about to see some forgotten lore and that's why she has to burn the tree down! But nothing happened. I'm not sure why her convictions are so strong against Night Elves. She's just targeting them. 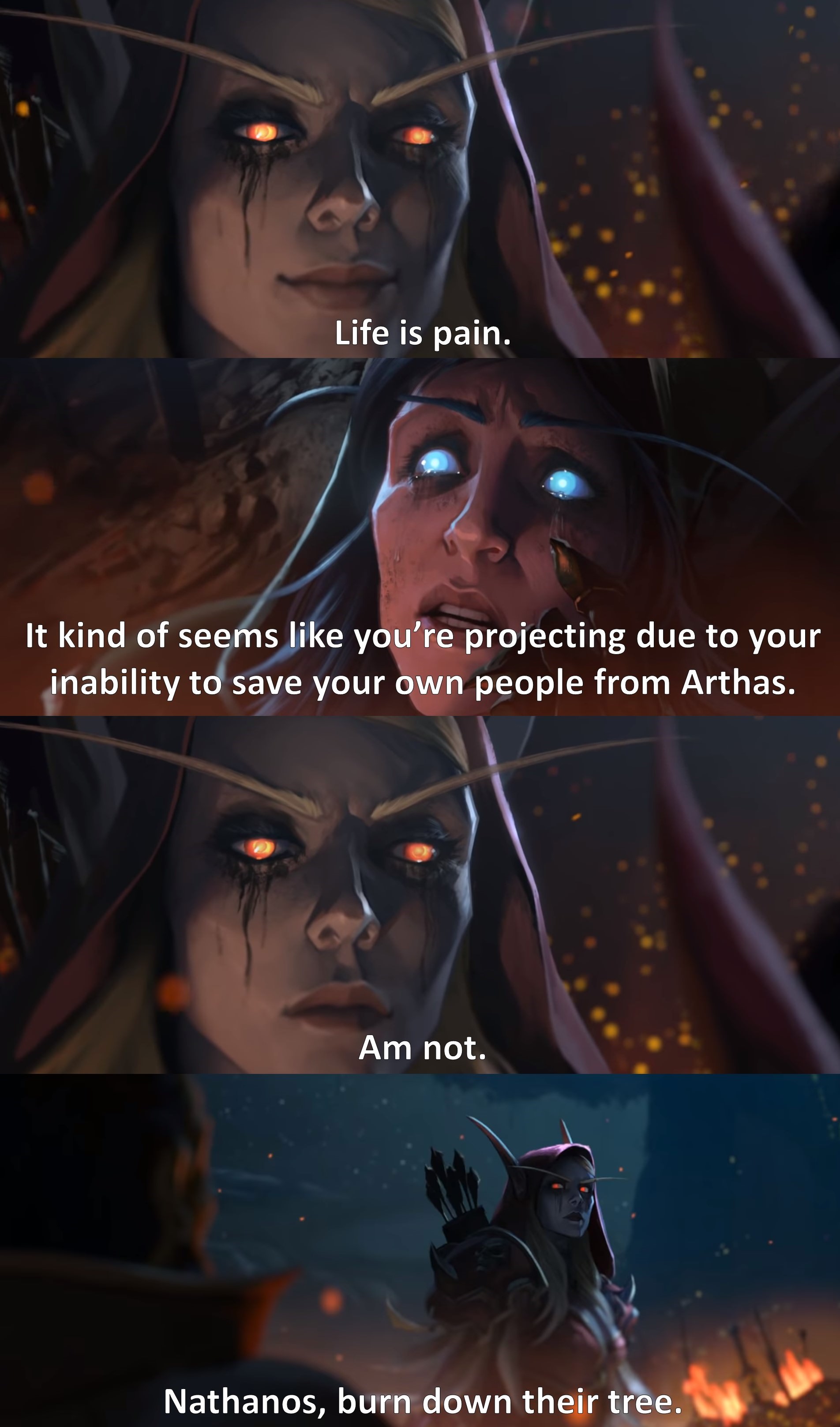 Lets go back and change a detail so that she is not focused on Night Elves, but the Alliance as a whole.

Both Alliance and Horde are #OccupySilithus because thats where Sargeras stabbed the planet and caused sweet, sweet Azerite to bleed out. Goblins discovered the material before the Cataclysm, and were the first ones to find the precious rock candy in Silithus (I think?), thus giving Horde a rightful claim to it. The Alliance then decided it was time to meddle in Horde business.

At this point Sylvanas should have told Anduin, "you done goofed and consequences will never be the same." She should have declared to the Alliance that the Horde would take Teldrassil if they did not leave Southern Kalimdor. This is important because she isn't trying to outsmart the boys in blue, she is teaching the fresh king of Stormwind that there is fallout for the choices he makes. This also puts her in control of the situation, something we admire in a strong warchief. To top if off, we would feel more justified as Horde for what happened to Darnassus. This makes the story "morally gray" like Blizzard wanted. Genocide is evil, but the Alliance was given a chance and Anduin chose poorly. If someone asked Sylvanas why she burned the twig into the ocean, she would respond, "I didn't. The Alliance did."

This leads me to my next point.

2. Burning down Teldrassil should have been the plan right off the bat

Sylvanas burned the tree down because she couldn't destroy hope for the Night Elves or something. It  was an impulsive emotional response from a character who had a reputation for being cunning and thinking before acting. What happened in the event doesn't fit her well.

I think it is in very poor taste how Blizzard gives us a strong female lead, but makes emotion her Achilles heel. She is overemotional at the wrong moment. That's a negative stereotype, yea?

I'm not exactly what you would call a crusader for women's rights, in fact many people would call me a pig. But when a guy like me notices a glaring error like this you know something is up. I'm reminded of what they did to Jaina and how the "dreadlord" joke developed. Jaina was such a hellion that people started to speculate she was a demon trying to cause conflict between factions. With such a track record, I can't wait to see what they do to Yrel!

Blizzard isn't being intentionally sexist, or at least I hope not, but what this shows me is that there is some serious oversight when it came to this story. No one on the team stopped and thought, "Hmm. Maybe we're not portraying our strongest female character right?"

Don't get me wrong, there's nothing bad about having emotions. But there's a time and place for it, and as much as it can help develop a character, it can also hurt them. Sylvanas knee-jerk reaction hurts her character because it makes her seem out of control. Whereas having her intentionally follow through with a plan to burn Darnassus alive enforces her as a strong character. It shows commitment, authority and confidence.

3. I don't have a third point, I just didn't know how to segue into ending this blog

Battle for Azeroth shows a lot of promise. I like what I'm seeing as far as content goes with new areas to level and allied races. But War of the Thorns puts a damper on the story. We know what kind of writing this content is capable of, such as in "Old Soldier" which was sad and thought-provoking.

War of the Thorns is brief but it hurts a wide range of things. It hurts Sylvanas as a character, obviously, but it also hurts our beloved Vol'jin because he is the one responsible for putting her in power. Now we question his decision making skills, which wasn't an issue before. It also hurts the Horde, with part of the story being centered around the idea that the Horde is once again divided. The opposite direction of where the story should be headed. Love em' or love to hate em', a strong Horde is good for everyone. It was okay once to go the warmonger path, but how can we recover from Garrosh 2.0? Are we honestly saying Jaina was right? I don't like that.

I reckon I'll do what I did with past expansions and focus on what I love while I ignore what I hate. At least we got dank memes this time. 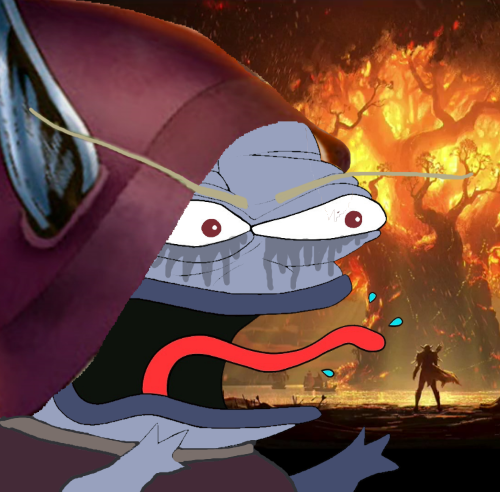 (Shoutout to r/WoW for making my lurking experience enjoyable and giving me content to steal for this blog.)