Attempting to craft an emotional experience with Rainswept

For some reason, I haven't been able to add a profile bio after joining Destructoid, so I'll start with a bit of intro here. I'm Armaan, and I love story driven games (as is obvious from my previous post!) In fact, I'm one of those weird people who care more about story than gameplay. Expect occasional posts from me discussing things like story, atmosphere, immersion and emotions in video games - and posts related to a game I'm working on that seeks to include all of those aspects.

A year or so ago I decided to make my own story driven game - Rainswept - A murder mystery adventure game. This post is kind of about that, but most of it is about another game that's inspired me to make story driven, "emotional" games for the rest of my life:

There was a piece of music floating around in my head, but I couldn’t identify it right away. A few seconds later it hit me: it was music from Mass Effect. I immediately opened Youtube and started up my favorite ME soundtrack suite.

The first few seconds of the video, the first three notes, manage to break my heart every time.

While listening to this, I asked myself: Why was the experience of playing Mass Effect so valuable? Why was it worth my time, and why am I here, half a decade after the end of the trilogy, still listening to music from the game and still feeling moved by it?

The answer that came to me at that moment holds true for all forms of art: It makes you reflect and draw parallels with the greatest adventure we can all experience – our own lives. At the end of the game, you sit back on your chair, (hopefully) satisfied. You’ve learned. You’ve grown, along with your character. You’ve been on a journey. And now, maybe, you wish to live your life a little differently – a little better, or fuller, and with more love. Also true for other art forms, it allows you to deal with neglected or suppressed emotions through the game and its story and characters. 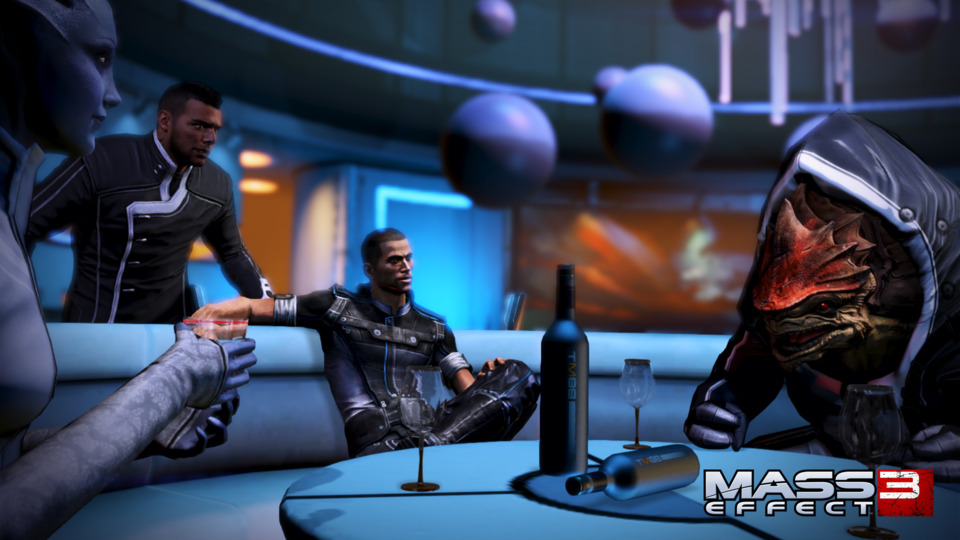 There are other reasons too – compared to other forms of art, it’s only through playing a video game that you can create a memory. A memory you can look back at years later and have stories to share about. You can’t do that with a movie, it’s too short. A TV show, maybe – but it hasn’t happened to me yet. But visit the comment section of a game’s soundtrack such as the one I shared above, and you’ll see tons of discussions with people getting nostalgic about the time when they’d played the game - talking both about their favorite moments from the game and about the events that had taken place in their actual lives during that time.

That’s the lasting, emotional impact a video game can have, and I’d be honored if I was able to be a part of this as a creator too.

To create such an experience, as mentioned above, I started work on Rainswept. It's a murder mystery adventure which can probably be summarized as a bit of Twin Peaks + a little NiTW. A couple is found dead in their kitchen - the local cops and townsfolk think it was murder suicide, their assumptions rising from rumors of the couple's toxic relationship. Detective Anderson comes in to help the local cops with the case, while trying to deal with the uncooperative cops, gossipy townsfolk, and a past that haunts him. 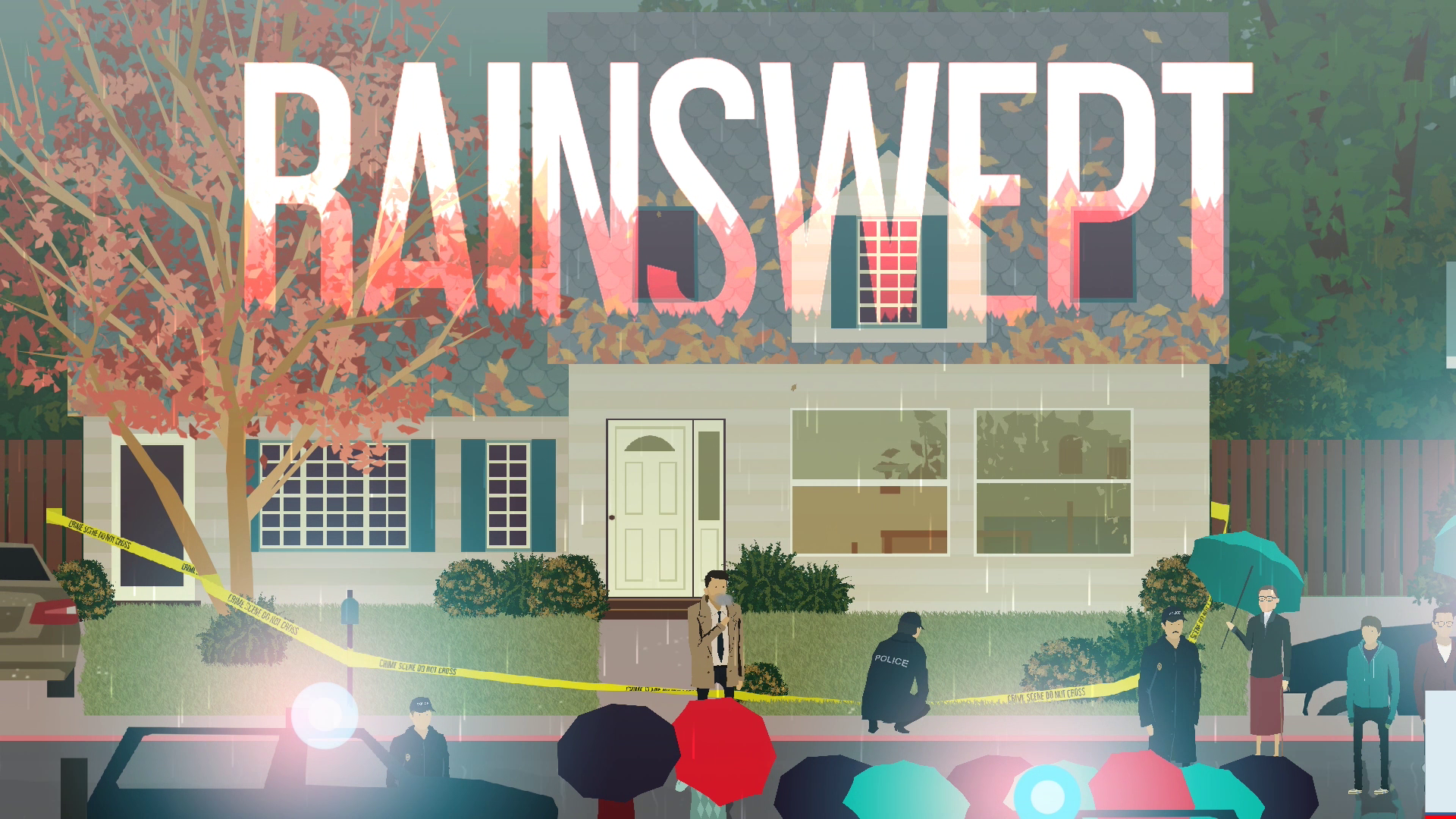 Listening to the music I linked above, I started wondering about the elements that would be most influential in creating an "emotional" experience similar to the one that was created by Mass Effect. It's not easy to answer that question, and there’s probably no right answer – these things can’t always be broken down technically – but I’ll give it a shot by looking at the steps I’ve taken in creating Rainswept so far, and draw parallels with Mass Effect as that's what inspired this whole train of thought. My thoughts here are focused more towards story driven games similar to Mass Effect, so keep that in mind.

First then, would be story. Story is the meat of creating an emotional experience, at least in the context that we’re talking about here. It’s designed to take you on a journey of highs and lows, possibly in a way that resembles life. For a story to be specifically emotional, it needs parts of both ends of the spectrum – the good times, and the sad. The sadness of a situation really hits hard if there’s happiness to compare it to within the story. Either emotion by itself would fail to have as big of an impact. 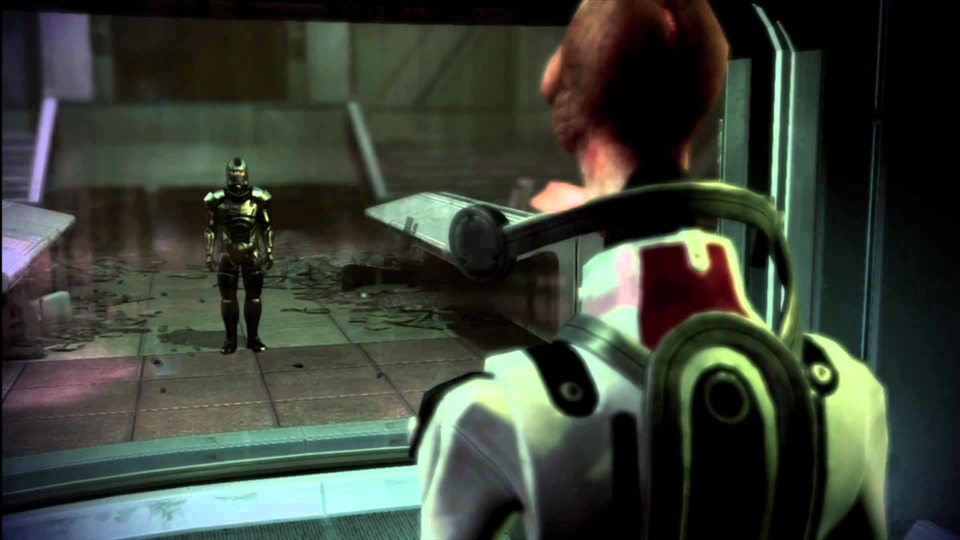 Mass Effect is such a huge game, such a long story, that this doesn't prove to be a problem at all. There are moments that cover a vast array of opposite emotions. Though it's mostly about a threat that may end the universe, there are small and intimate moments to balance it out, which make the threat seem even bigger. There really is something worth saving.

In Rainswept, without giving too much away, this is done by occasionally introducing happier times completely cut off from the present situation. Through flashbacks that reveal the victims’ lives, we get to watch them fall in love. For a moment, we’re happy for them. We’re excited – the guy is going to get the girl. But immediately we’re returned to the present day and reminded of the morbid situation. The happiness we felt suddenly feels… meaningless. It brings up mixed emotions, and a number of conflicting thoughts. 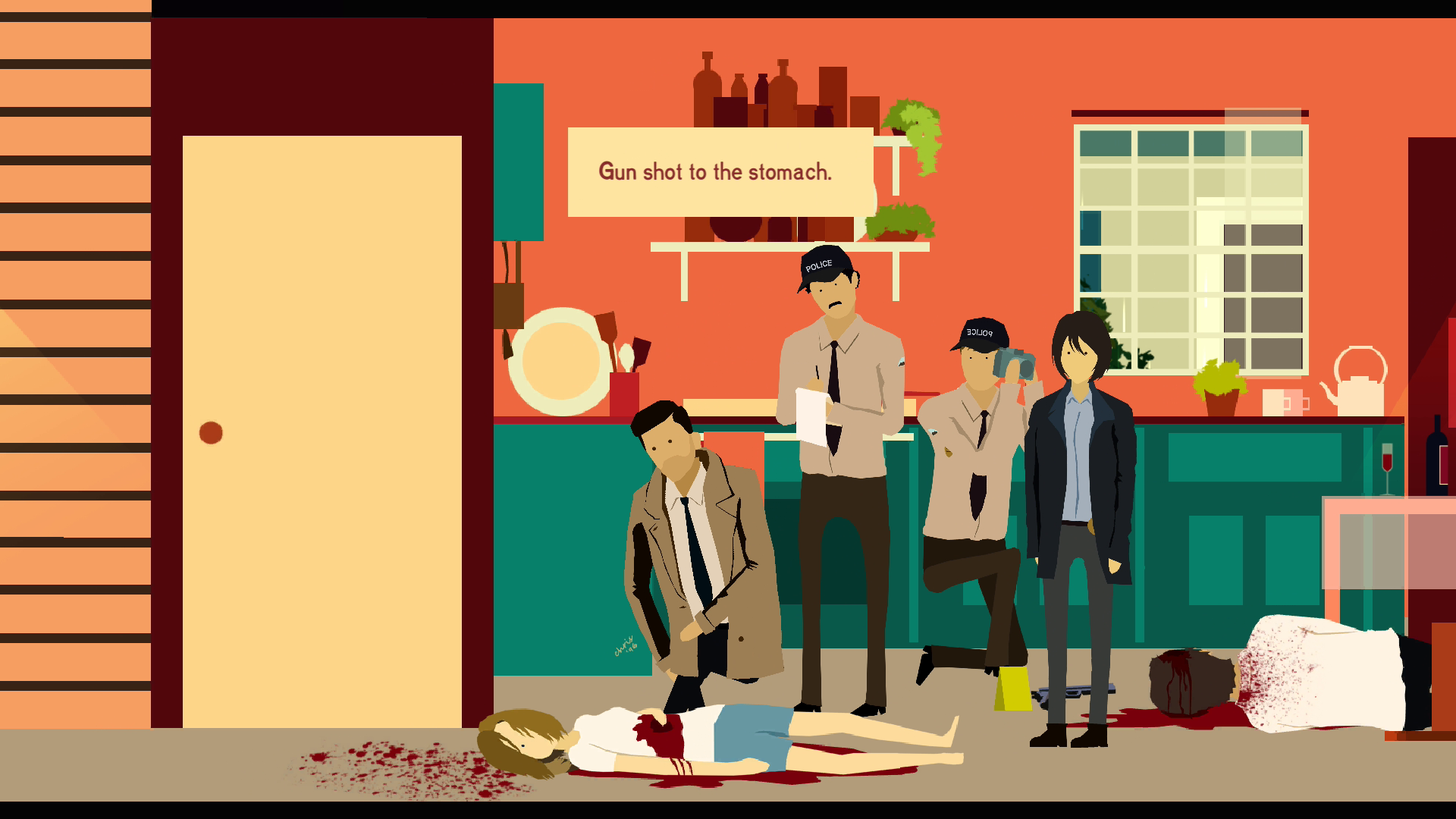 But I feel, for an aim of crafting an emotional experience, characters might be even more important. This is true in story focused games, but also in life. Characters are what really bring that emotional punch to a story, and bad characters can rob you of that deep emotional experience in a story just because you don’t care about what happens to them.

Characters – and people – motivate you to be better. To grow, and change. Once players are invested in a game’s characters, every up or down in their story is a potential spot for creating emotion.

Mass Effect has an excellent cast, and is one of the things that people love most about the game. Check the comments on the video above, there are people raising to toasts to their favorite characters - Garrus, Wrex, Liara, Tali, Mordin - the list goes on. It's the moments with them that hammer in the fact that so much good is at stake. 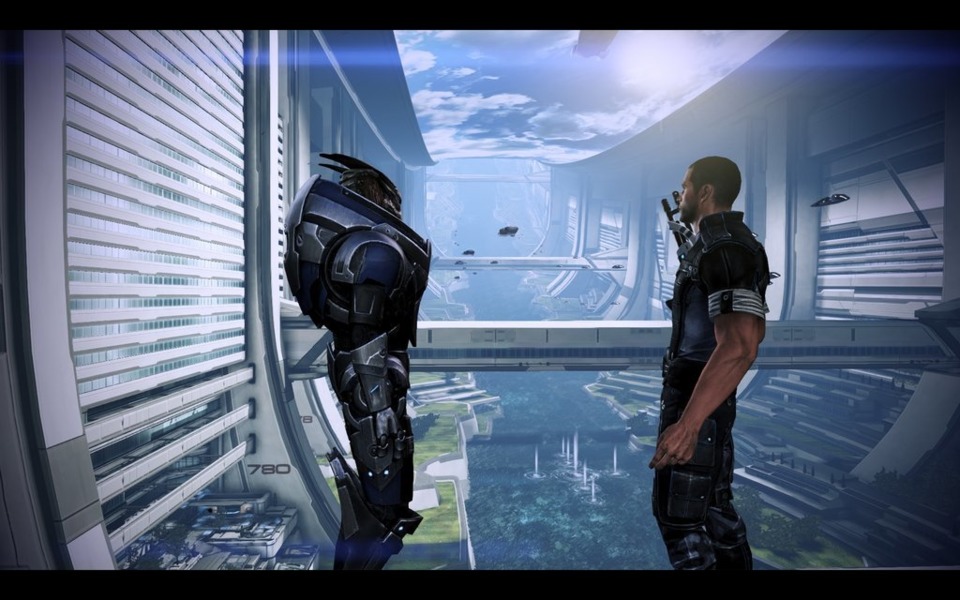 In Rainswept, I’ve tried to create every character with a detailed backstory leading up to the present-day events. The way they behave, their motivations, their dialogues all spring from this deep well of their history. I really feel that backstories are like magic - You just need to write their history and in return the characters tell you everything that you need to write for them from that point on. The characters then feel real, with their own varied quirks and flaws, leading you to identify with and care for them, or some of them. 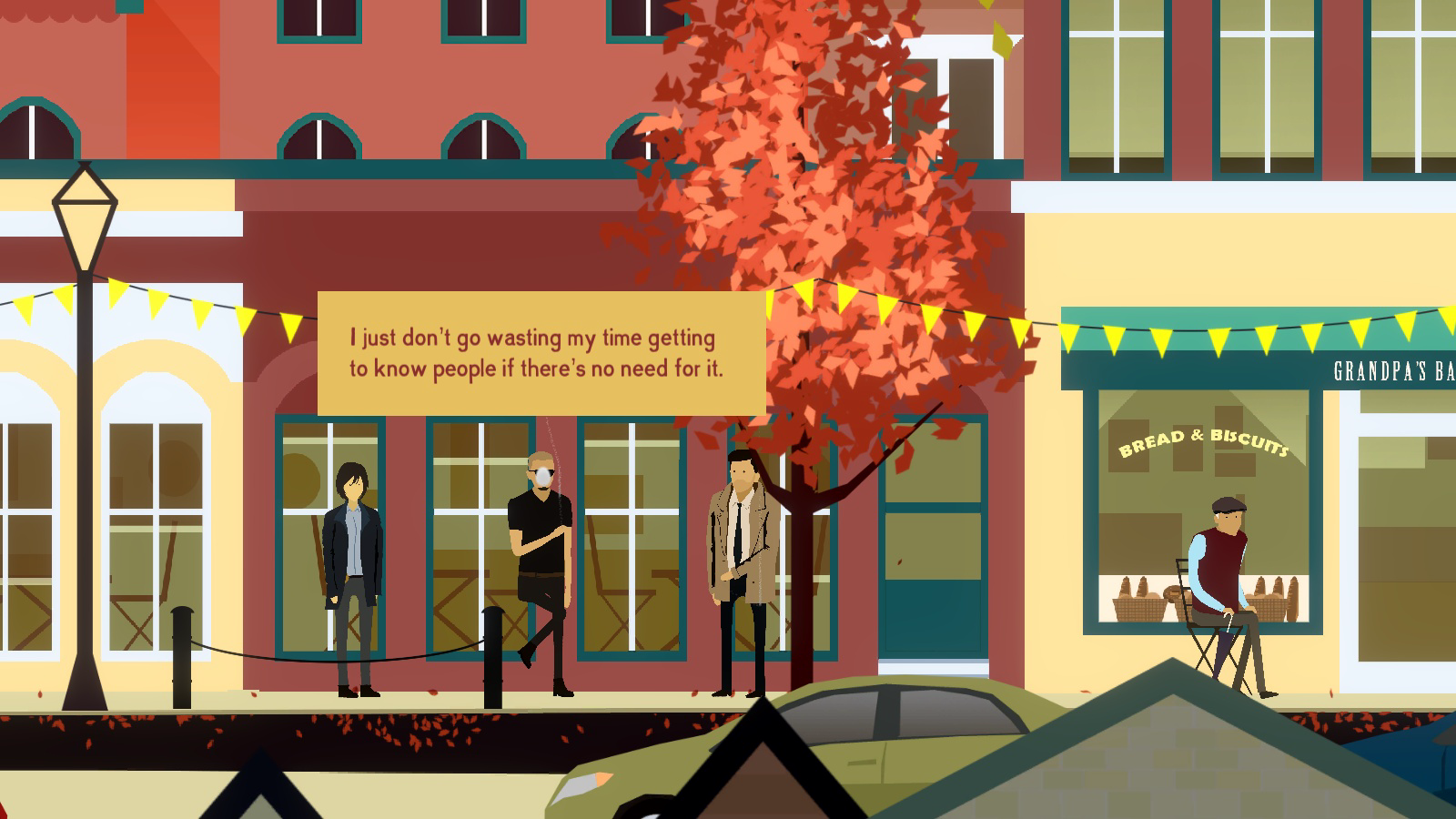 Thirdly, and it should be obvious from the way I started this post, it’s the music. Music by itself is probably the most influential art form in our lives – everyone listens to music, and we consume a lot more of it than we consume other forms of art. Also, as I mentioned above, music can move you emotionally within seconds. I think that counts for a lot, and that’s what gives it so much power in this context – when creating an emotional experience, music is one of the strongest weapons in your arsenal.

In a game like Mass Effect, it is used in a very cinematic manner – underscoring important moments of the game and its story during cutscenes. Certain characters have their own themes. In a game that has SO MUCH going on, especially with its story and characters, the soundtrack really gets a chance to take center stage and shine.

It’s also probably the easiest way to get nostalgic about a game. All you need to do is put on the soundtrack for your favorite game, and the memories come flooding back.

Music in Rainswept works similarly to elevate the emotion of each scene. The main menu track, titled The Old Church, immediately tells you everything about the mood of the game. It conveys everything that I want to convey through the game. It’s somber, but there’s hope too. There’s darkness, but there’s light.

Just like Mass Effect, there are a few melodramatic tracks in Rainswept that help to amplify the emotional value of important scenes. There are specific tracks that play for specific emotions, or situations, sometimes being used in unexpected ways. A love theme, for example, could be used during the autopsy of the same characters.

So that’s story, characters and music. This isn’t everything, or the only things that are required when creating an emotional experience for video games, but they’re ones that immediately came to me as I asked myself the question. And they’re definitely a very good starting point if you’re planning to create something as impactful as the Mass Effect trilogy - possibly the ultimate aim for me.

Lastly, here's a trailer for Rainswept. I've also got an Indiegogo campaign running for it currently.

There may be plenty of other things that I might have missed, and I might write another post if I recall more. Can you think of any? Anything here that you disagree with? What do you think about my approach with creating it for my own game? Do let me know in the comments. And I hope you enjoyed reading this mix of an analysis + dev blog! :)