Sega's Shining series has always been one of many genres and possibilities. It started as a dungeon crawler RPG, and it thrived as one of the best SRPG franchises in the 16bit generation. As such, it was only natural that it takes a stab at the action adventure genre dominated by Nintendo's Legend of Zelda series.

Shining Wisdom is the result. A game set in the Shining universe, but with gameplay that is similar to Zelda without being a direct clone.

What is most apparent though, is that this is a game made for the Genesis, but was late enough to be released on the Saturn instead. 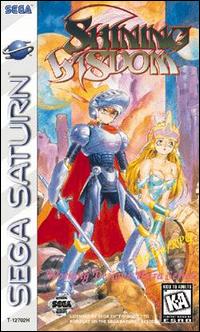 "The circle is coming around yet again. Behold! Your greatest trial lies just ahead..."

One thing that is surprising about Shining Wisdom is that it had a decent story and some witty writing. Which was atypical for the tie, especially for Sega RPGs which generally had poorer localization than on Sony's or Nintendo's platforms.

While not a breakthrough in narrative design, Shining Wisdom manages to hold interest in the game's world by consistent narrative engagement. As Mars, the mostly silent protagonist of the game, you are tasked with stopping the evil schemes of Pazort, whose four minions released four elemental god-like beings to resurrect some god-like great evil.

Riveting stuff, it is not. However, the game keeps the story in the forefront, and as such is more rewarding narrative-wise than A Link to the Past, for example. 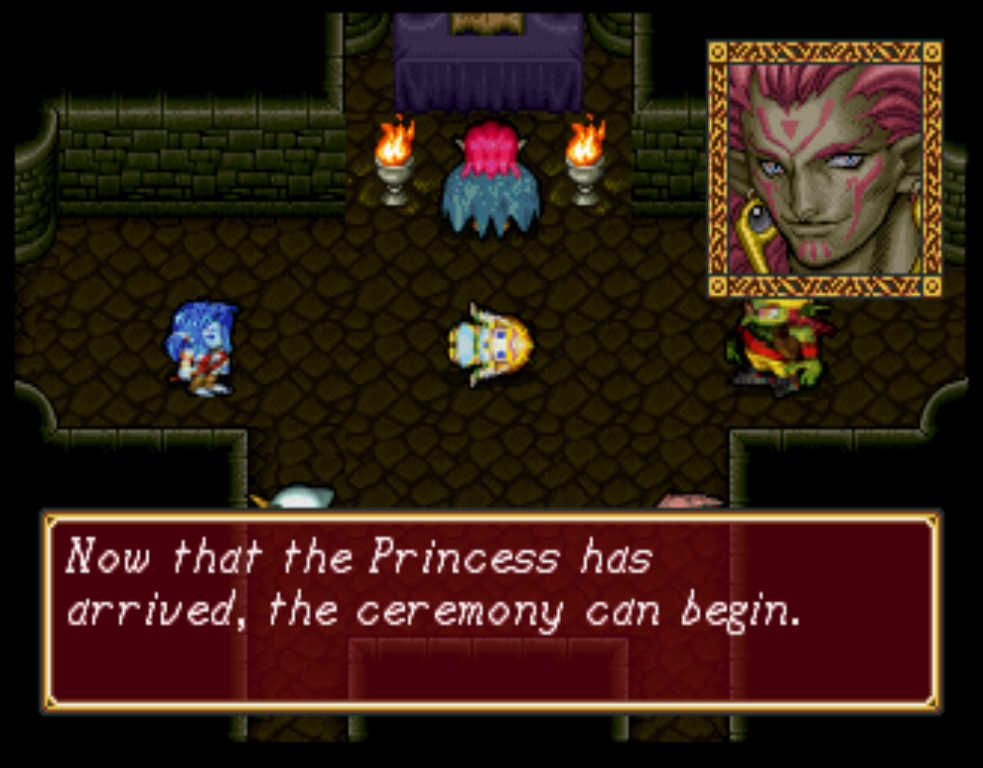 Evil man, Evil minions, Evil location, and a princess. Everything is there for a typical Evil party

What is really interesting about the story though is the conversations you can have with the town's people and castle guards. These conversations are mix off regular RPG jargon, backstory exposition, objective explanations, but also some really funny stuff. Including, but not limited to, some video game references.

Something I wish the game did more off is continue with the eventful beginning of the game. At the start, there was a reason to get into a dungeon more so than getting the magic McGuffin. Whether it was to increase your standing as a novice guard, or to escort a goose princess into a magic tree, it added an objective for Mars other than a gameplay device.

"I am Pazort, Master of Subversion! Soon all Palacia will cower before me! HA HA HA HA HA..."

Pazrort's scheme is a simple gameplay segregation tool. Release four elemental, each in one dungeon, and then converge into a final place to resurrect an ancient monster.

It neatly segregates the game's world into at least five dungeons for the player to beat. Only thing he forgot to do was kidnap the princess and keep her for the end. That part is resolved much earlier.

The game looks and controls similar to the Legend of Zelda SNES game. It is a top-down view, and the game world is open with dungeons and enemies strewn around. It is mostly linear progression though, as abilities gained in one dungeon are needed to access or beat the next.

Of course, this is the same satisfying gameplay feed-back loop that made Zelda famous, and it works well here. Not to say that Shining Wisdom is a straight-up Zelda clone. 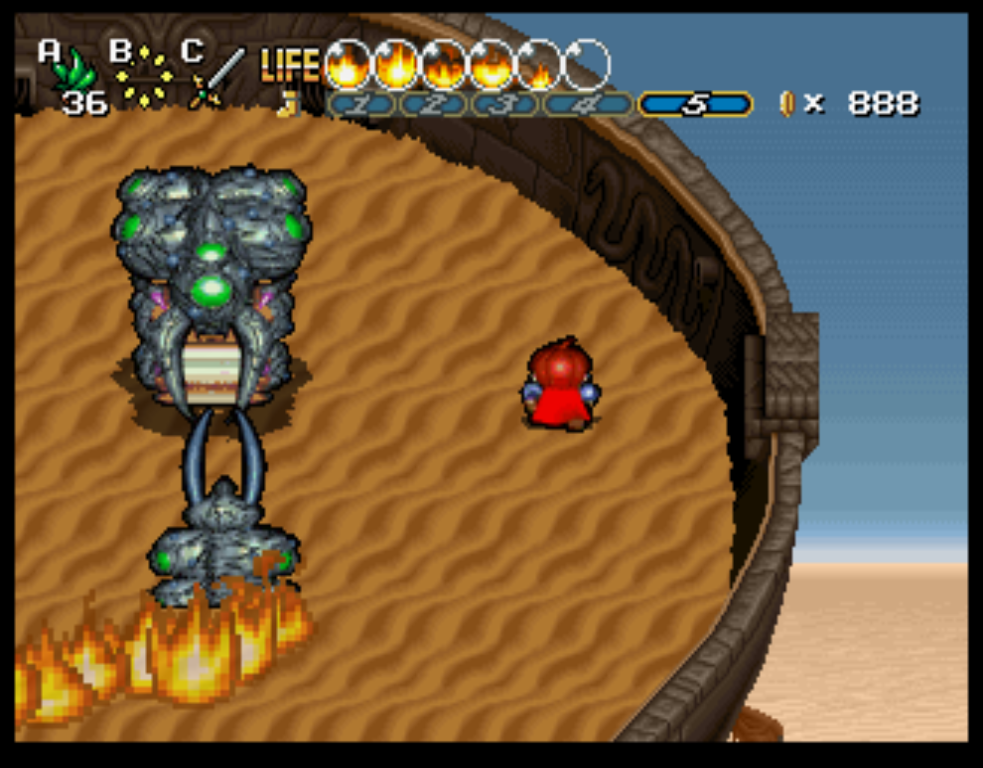 The game is at its best when fighting epic boss battles

While inspired by many elements from Nintendo's franchise, the mechanics are widely different.

One thing is a major differentiator between the two, and that's the dash meter. Instead of holding a dash button, the player must mash it to reach a certain dash speed (from 1 to 5) and then hold it to keep Mars at that dash level. If hit by anything, the dash level decreases.

Having a high dash level is necessary to move quickly, hit harder, and use the magic orbs for some useful and sometimes necessary abilities.

In the final boss, I felt in 10 minutes what a marathon session of Mario Party would cause, minus the blistered palm.

"Your peaceful, boring world will be replaced with a land where chaos rules supreme"

Other than its mechanical issues, Shining Wisdom feels like it should have been a better game, if only some serious quality of life elements were put into focus.

Dungeons can be both fun at times, but amazingly frustrating due to their labyrinthine design. A map would have made things much simpler and more enjoyable. 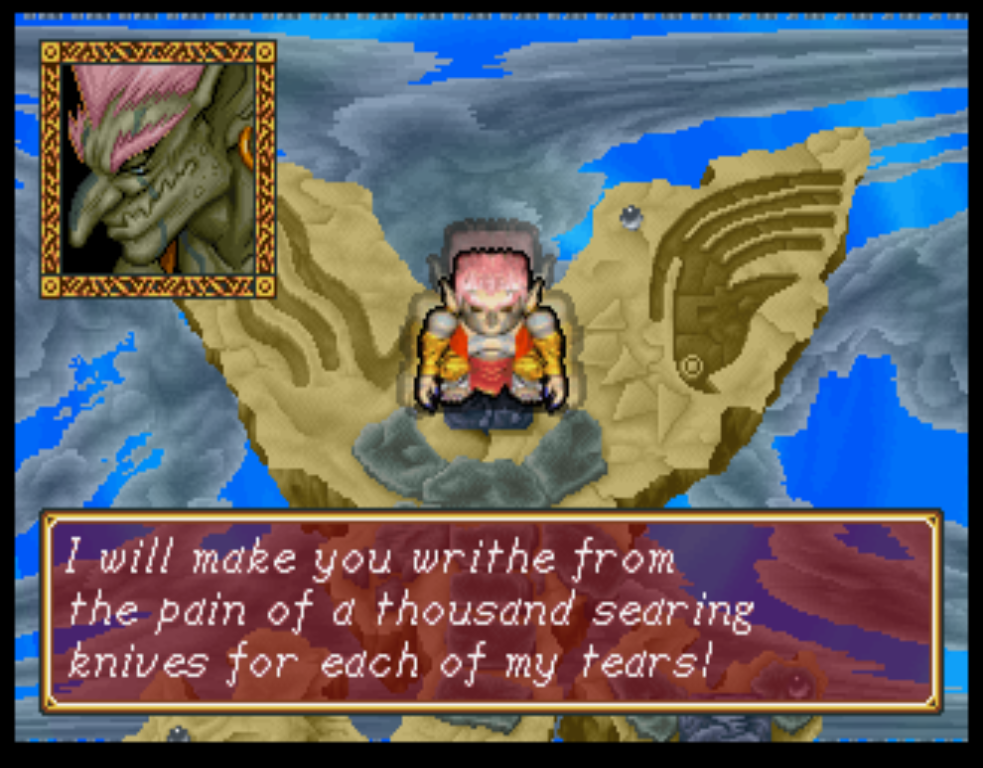 Its at its worst when dealing with thousand little annoyances

What is frustrating is that the puzzles are good, and the game-play mostly works regardless of how tiring mashing the dash button can get. Shining Wisdom's dungeons make use of most of your abilities, not just the latest one (a common complaint against Zelda games).

One thing showcasing the best of the game are the boss fights, which even while needing some finger dexterity to be overcome, are exciting to play, and challenging to beat. Even then, the game's loose design is sometimes very obvious.

For instance, in one boss fight, it is nearly impossible to hit the enemy without being hit yourself. In game testing, that should have flagged, and the sword's range of attack should have been increased.

It is obvious that this was a game initially being made for the Genesis.

It is obvious for two reasons.

The first is that the game colorful graphics and sprites are all possible on the Genesis hardware. These are the charming 16bit backgrounds and sprites we fell in love with before, and they show their graceful aging here. It looks as good, and sometimes better, than any other 16bit Action Adventure game on the previous generation of consoles. 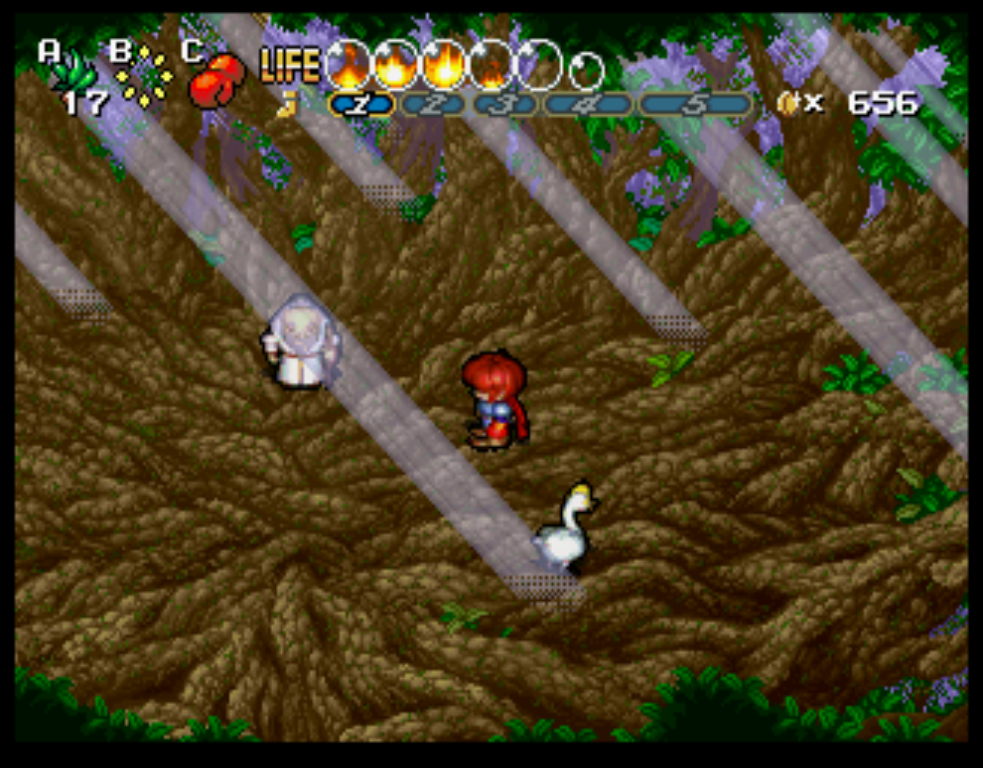 While the graphics are good, I cannot say the same for the mundane design of most enemies in the game. They won't win any minion design awards. Still, the main characters and bosses have some really good portraits (two characters are obviously missing theirs for some reason), and their design is good.

Musically, the game doesn't have a lot of tracks. However, it has at least five really good ones. Both over-world themes are great, and the Odegan castle theme is something else. This is the only part of the game where the Saturn's increased power is obvious, and it is used in making both complex and catchy tunes.

One complaint in the time was about the lack of voice acting. All I can say is that it gives me one less thing to complain about, as I don't believe the VA of the day would have been anything but terrible.

Shining Wisdom is a frustrating game to review. While it began strongly, with good story, funny dialogue, and some great graphics and music, it's shortcomings were eventually exposed.

The dash mechanic is innovative at first. However, it soon becomes an inescapable annoyance. Inescapable because you will always need to be dashing to keep the game from being a slog, and because the game' lack of directions will keep you dashing more time than you will otherwise need to.

As a straight-up Legend if Zelda clone, it would have been better, but its lack of fine-tuning is obvious. Mostly though, it is all the bloody dash button mashing that frustrated me. 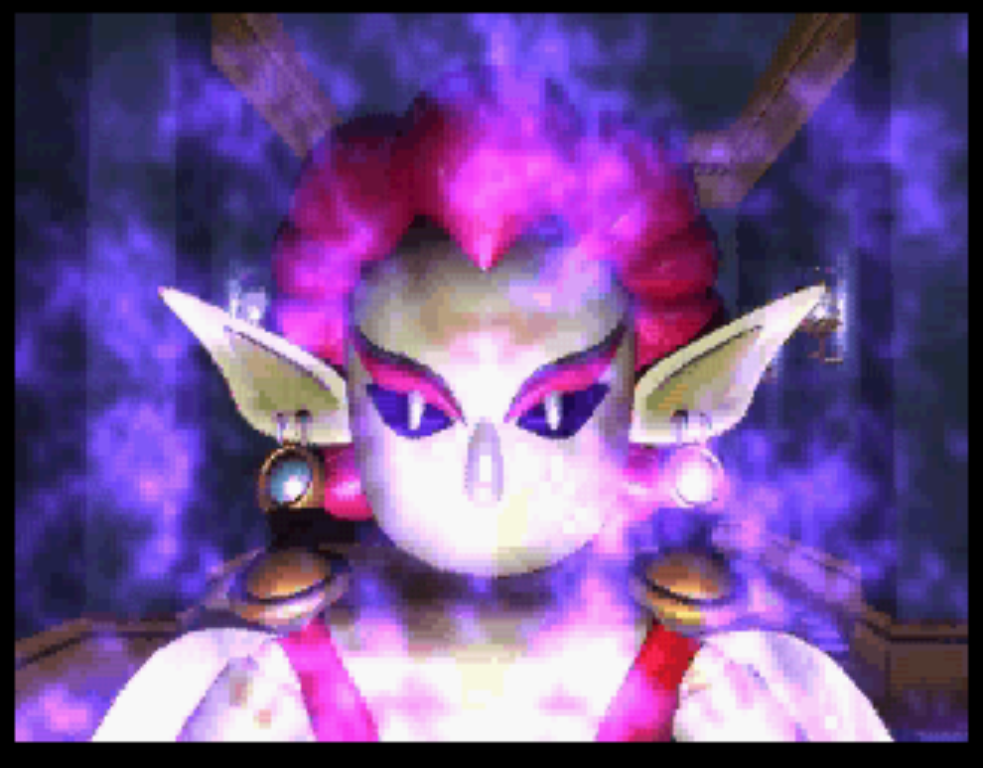 They didn't know how to put in mouths yet. Makes him look more evil in my opinion

1- Mash the run button and then hold to keep your running speed.
2- You can farm money by killing the spiders that multiply at the millennial tree.
3- Try and get enough money to buy the pajamas (you don't need more than one) at the secret shop (which you need the freeze orb to access).
4- Each orb interacts differently with some equipment (boots and gloves only).
5- Collect blue diamonds to increase your health, and orange diamonds to increase you recovery health. 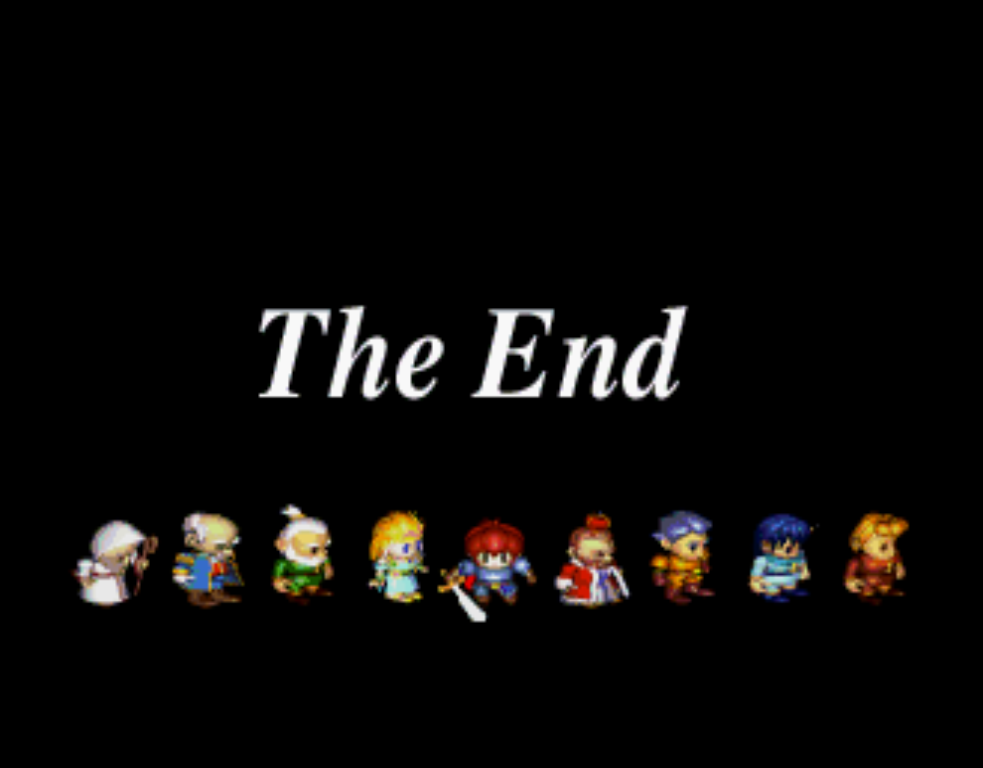 I cannot say that I didn't enjoy this game. Camelot's credentials were obvious in the parts that were good, and their naivety were obvious in those that were not so good. Ultimately, this wasn't a highlight in the Action Adventure genre, and its innovations hurt more than helped it..

Next game on the list is helicopter shooter game, Soviet Strike in #80. The Strike games were fun on the 16bit era, with Desert Strike on the Genesis and SNES, and Soviet Strike is the definitive version of the game on the fifth generation.