How are you liking Octopath Traveler + who did you start with? 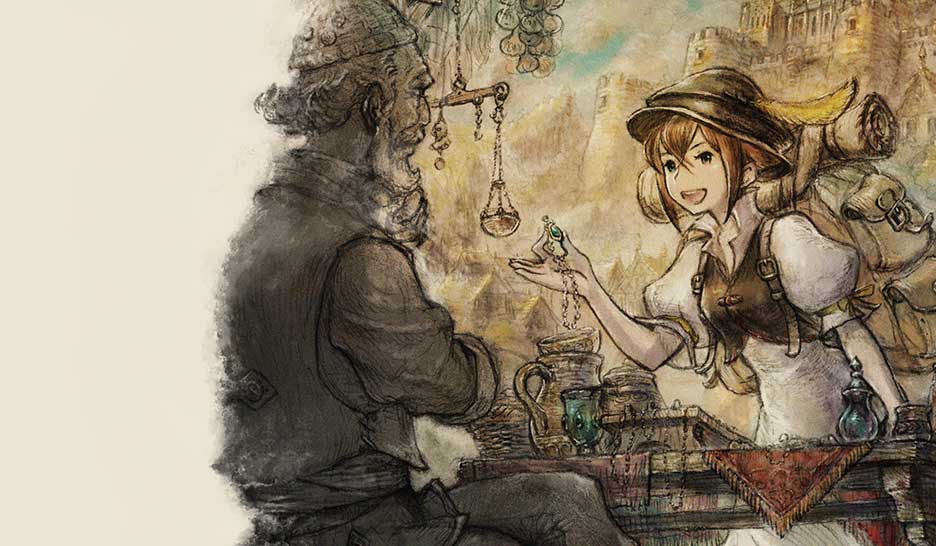 To me, Octopath Traveler is a spiritual sequel to Bravel Second, but with a different hook of high quality backgrounds with well designed sprites that actually exist and cast shadows. I've slowly been unlocking the secondary jobs to expand my options, such as giving Primrose or Alfyn a secondary for more weapon choice, or giving Cyrus bonuses to recoup his SP points for spellcasting. Not to mention the dissappointment of there being no overarching story being balanced out by really good individual stories. I'm actually liking Therion's Ocean's 11 story with themes of brotherhood and trust showing up.

The duality of the path actions are also surprising interesting. Having both Tressa and Therion at once means I can lift most items but purchase the riskier to steal items as an option. Most of all, the expansion of the BP system with the vulnerability system is a fun progression from what I did in Bravely Second and the possibilities really open up. More BP means more damage but depending on the action, it means more hits in a combo or strengthening one single attack exponentially. Cyrus is an incredible nuke once everything is broken and I offload all the BP he's saved up on one powerful spell.

So how have you been liking Octopath Traveler? And who did you start with? The question of who did you start with has been absolutely popping up, so now you can rep your choice on the FP. I realy wished merchants in Bravely Default were more interesting beyond their passives, so I wanted to try Tressa first and was not dissappointed. She's probably a popular choice because she's just the goodest girl, but the fact she has so many good, merchant themed skills like hired help or donate BP makes along with her decent offensive stats make her a versatile support fighter.

Leave a comment below and you can see your answers on the FP and we can start some exciting discourse too like how infectious Tressa's story can be and how incredibly dark Primrose gets. Oh my god is Primrose's story dark.