Taking Out the Trash: Target: Hitler

Like many people, I love killing video game representations of Nazis. Been slaying them for years, and it never gets old. Yet, while depriving digital Germany of father figures is a beloved hobby of mine, I love killing Hitler more. Damn, do I love killing Hitler. I may have lost count of how many times I’ve wiped that toothbrush mustache off his upper lip, and I’m still looking for more opportunities to do so.

Maybe you’re also a fan of maiming cyber-Hitler, in which case, I’ve collected a small assortment of titles that let you perforate the first and last leader of Third Reich. So get your razor ready so that you can take Hitler’s mustache as a war trophy, and we’ll embark on a little tour of tyrannicide.

Just a warning, Hitler is generally used as end-boss material, so there may be some SPOILERS ahead.

Nintendo’s American division liked to keep a tight grip on its marketplace in the late 80’s and early 90's, and while it was undeniably aggressive and, frankly, illegal, it did help establish the conventions of the modern video game industry, for better or worse. More notably, they were pretty protective of their family friendly image to the extent that they demanded any game licensed by them for their console to follow a strict code of guidelines. This meant no blood, no religious imagery, no drugs or tobacco, no sex or nudity, and no swearing. Some games managed to slip by these restrictions, and one of the more notable instances was Capcom’s NES/Famicom port of Bionic Commando, in which you blow Hitler’s head up.

Okay, so there was actually a lot of censorship. Hitler is referred to as Master-D in the North American version, and you fight against the “Empire” instead of the Nazis, but in the Japanese version, it’s not so coy. The Japanese title is actually “Top Secret: Hitler No Fukkatsu,” which translates to “Hitler’s Revival,” and the Nazis? Yeah, they’re Nazis. Straight up. 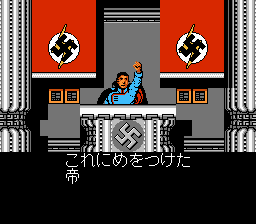 As for the North American version, any reference to Hitler or Nazism has been stripped. Sort of. But while Nintendo served as Hitler's stalwart protector, Capcom obviously really hated the guy, because they managed to scooch his death past censors without any editing. And what a death it is! In the finale, you jump after Hitler as he attempts to flee and are given one shot to take him out. Bust a rocket through the canopy of his helicopter, and you’re rewarded with a sweet Hitler head explosion.

Oops! I hope you weren't eating.

When thinking about killing Hitler, most people’s minds probably first take a visit to Wolfenstein 3D. Released in 1992, Wolfenstein 3D, wasn’t the original first-person shooter, but it was a landmark title that helped establish the formula that would be used for years to come. It has also aged like crap. Listen, I have a lot of respect for Wolf 3D, but it is not fun to play. There are only a few guns that are all basically the same, there’s a small handful of enemy types, and all the levels are simple mazes with repetitive wall textures. Nonetheless, I’ve taken more than one romp through it for the simple joy of killing Hitler.

Hitler hides out at the end of the third episode, a raycasted representation of the Führerbunker. Like a wuss, he attacks you from the safety of his mech suit. Deal enough damage, however, and he pops out of his shell and continues the attack in a more personal manner. With a bit of strafing and a can-do attitude, Hitler goes down easy, left in a bloody pile for the Russians to find. His departing words are “Eva, auf wiedersehen!” (good-bye, Eva; a reference to his mistress, Eva Braun), which is impressive, since he goes down in an absolutely bloody mess.

Hitler’s contribution to the Wolfenstein series was downplayed heavily following the first title. He still appeared in some of the game’s ports, but not the SNES version, which became victim of Nintendo’s previously mentioned censorship policies. There, he was referred to as the Staatmeister and given a shave.

Until a publisher finally accepts my design document, Sniper Elite has established itself as the Hitler-killingest series you can find. If you’re looking to feed the grey wolf a high caliber breakfast, look no further than the DLC for Sniper Elite V2, 3, and 4. Each one gives you the opportunity to re-write history by lobbing a rifle round right through Hitler’s mono-testicle.

It started off in Sniper Elite V2’s Assassinate the Führer DLC. In it, you intercept Hitler as he attempts to return to Berlin via his private train. After stopping his convoy, he’ll step into the open, giving you the perfect vector on his mellon. 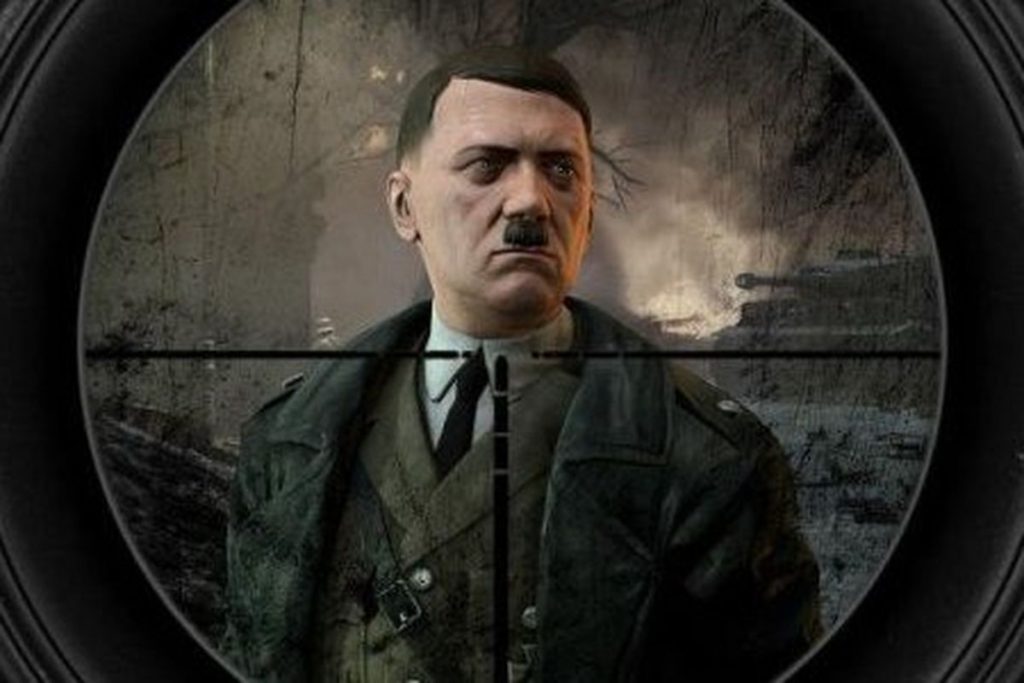 Sniper Elite 3 takes things to the African front in its Hunt the Grey Wolf DLC. You learn that Hitler is visiting Tobruk, giving you the chance to plug his strudel-hole.

You’re sent north of Crete in Sniper Elite 4, where you find Hitler visiting a base in Sendari. You’re there to kill someone else originally, but when Hitler shows up, it’s serendipity.

It’s inferred that you’re actually killing body doubles in all the above missions, which is absolutely BS. Why even add that doubt? Just embrace the alternate history. In fact, let’s not even humour that notion; you kill Hitler. You kill Hitler three times. That dick just won’t stay dead.

One place where a body double isn’t suggested is in Zombie Army Trilogy. In this unashamedly obvious bash-up of Sniper Elite and Left 4 Dead, a cornered Hitler has used an occult relic to raise his fallen armies from the dead. This goes about as well as you’d expect, and Berlin is overrun by the undead.

While Hitler is mentioned throughout the three games of the Trilogy, he doesn’t really show up in person until the end of the third act. From the gates of hell, he transforms into a giant Hitler-monster and attacks you with all the fury of the underworld. Beat him back by throwing the skeletons of his friends into the pits of the inferno, and you’re given the chance to send him screaming into the fires of the hell, where I’m sure he’ll get a… warm reception! Ah hah! 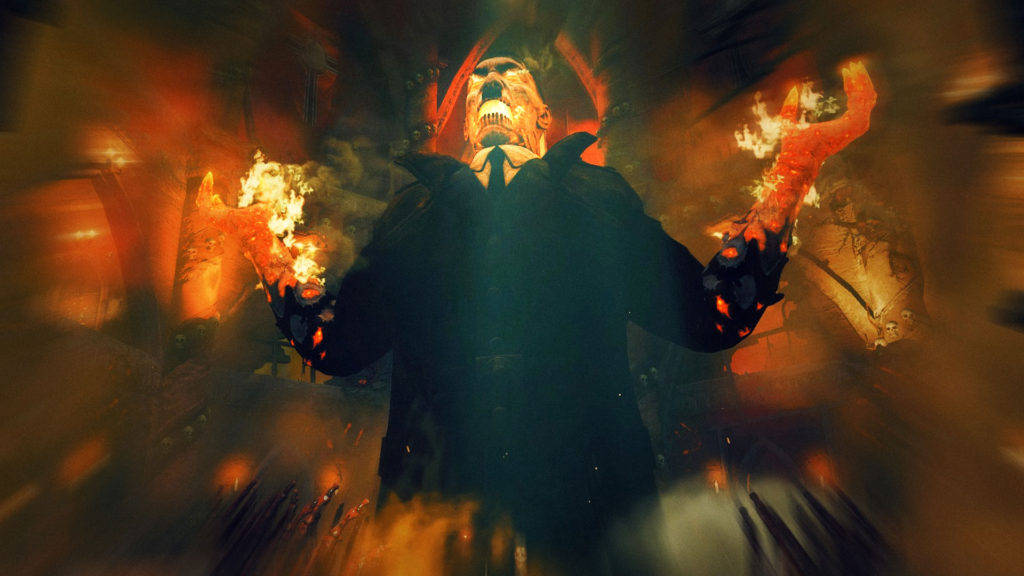 This could be considered an improvement for his image (Image source: sniperelitegame.wikia.com)

When I learned that MachineGames was making a new Wolfenstein, my first question was, “Do I get to fight Hitler in a mech suit?” The answer was no, sadly. Even with the release of the follow-up, Wolfenstein II: The New Colossus, I’m still waiting for my epic Robo-Hitler battle. However, I can’t be too mad since they did provide the opportunity to kick an elderly Hitler right in the fucking face.

The opportunity arises while B.J. Blazkowicz is undercover on Venus. He’s auditioning for a movie role, when, who should walk in, but the Führer himself. Since this takes place in an alternate 1961, Hitler is elderly and acts like he’s suffering from mercury poisoning. He hobbles around, spitting, pissing in buckets, and shooting people. Eventually, he gets bored and lies on the floor for a nap, which gives you the opportunity to punt his face off.

You’re not actually supposed to blow your cover at that instant, and indulging in a little Führer-cide will get you promptly perforated, but you can’t tell me you didn’t do it anyway. Doing so will net you a nice cheevo, so get to punting.

Unfortunately, you’re too dead to confirm that your mighty boot actually killed Hitler, but do the math. Take Blazko’s beefy foot, multiply it by Hitler’s soft, geriatric head, and that should equal scrambled eggs. 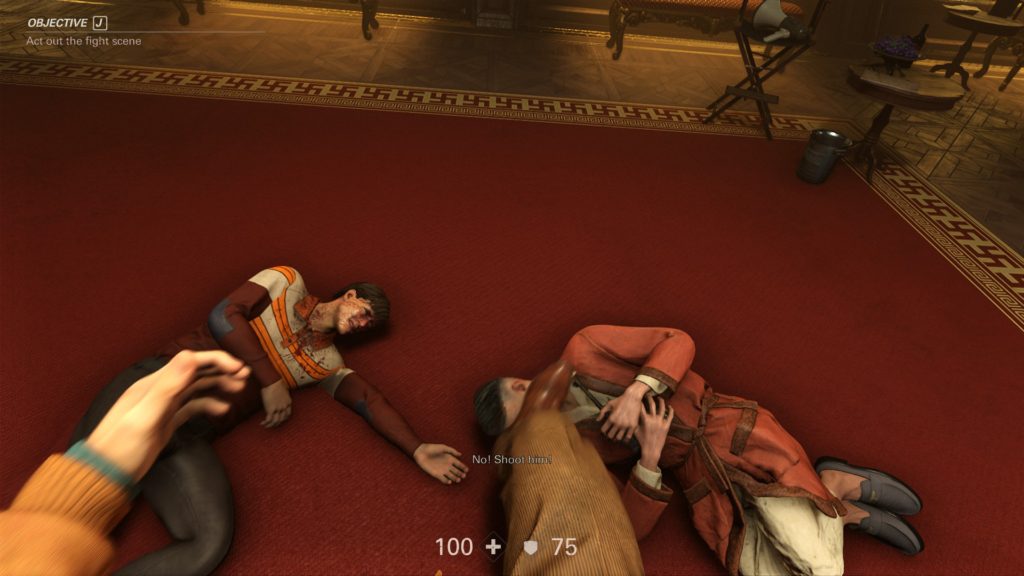 There are other examples of Hitler murder across the ages of video games, of course. The truth about video games is that the well runs so deep that it’s nearly impossible to dredge up every possible instance. Total Carnage, for example, includes a boss phase involving Hitler’s giant head, though it’s unlikely it’s supposed to actually be Hitler; Albert Einstein travels through time to murder Hitler in the prologue to Command & Conquer: Red Alert; Golgo 13: Top Secret Episode is another NES game that skirted past Nintendo’s censors, and it includes a cyborg version of Hitler, though it’s never clearly referred to as such.

So whether you prefer to fight demon Hitler, Robo-Hitler, or just plain vanilla Hitler, there’s a Hitler out there for you to stick your boot into. Though, maybe you’re one of those people who think that Hitler should never be featured in a game -- that maybe it glorifies his existence or trivialized the horrible atrocities he committed -- well, that’s definitely a valid perspective. It’s one that should definitely be discussed, and an opinion I keep in mind while I’m lining my sights up with Hitler’s flapping gums.

For me, I’ve learned to just accept that I get joy from planting ballistics in the grey matter of one of modern history’s biggest jerks. I figure that being remembered this way would enrage the man, so this is my middle finger to him. Hopefully you don’t mind joining me in flipping off the Führer. Now go and bring me 100 Hitler mustaches.