9 clues series: Is It Worth Playing?

The story is quite boring and full of clichés, the usual scenario: a girl decides to investigate a haunted place, she suddenly is attacked by an entity and calls her friend for help, the friend comes to that place where bizarre things are happening around her and starts to investigate the people nearby. Evidently, they seem too hide something from her either from fear or they are working for the antagonist (which you’ll find out that’s exactly the case). It’s not a classic hidden object game, it is more like a detective adventure game. There is an interactable map and 3 minigame types: classic hidden object puzzles where you must find a list of object and even build them, puzzle ones, usually required to open doors and detective ones where you must find clues. 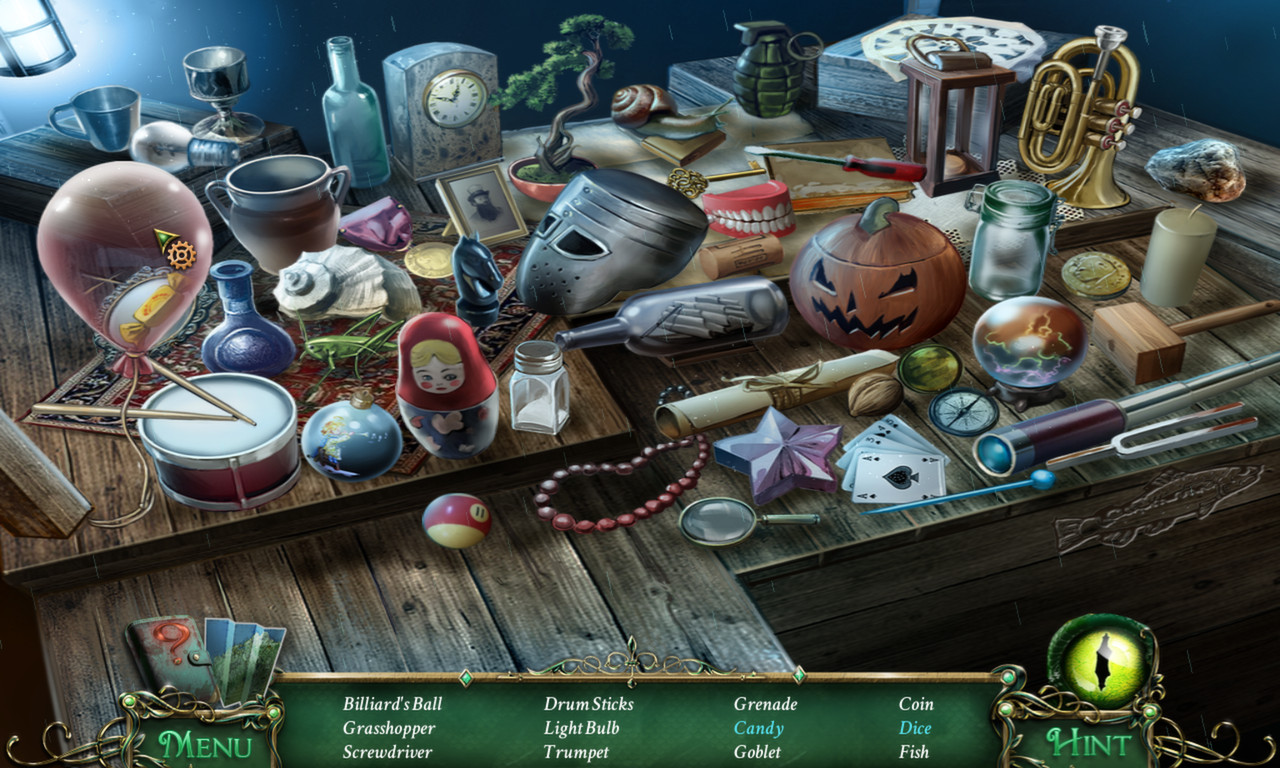 The game has many playable zones and you unlock the map of the area at the beginning of the game. Unfortunately, the only role of it is fast travelling and probably was introduced for the sake of looking to a polished piece of art or to give the game more realism. As the name implies “The Secret of Serpent Creek” there’s something about snakes. It’s nice that the snake is like a symbol in the whole story but there are too many references to them, it could have made it a little harder to guess. Incredible sound effects, almost realistic and I felt like I was being pulled into the game. 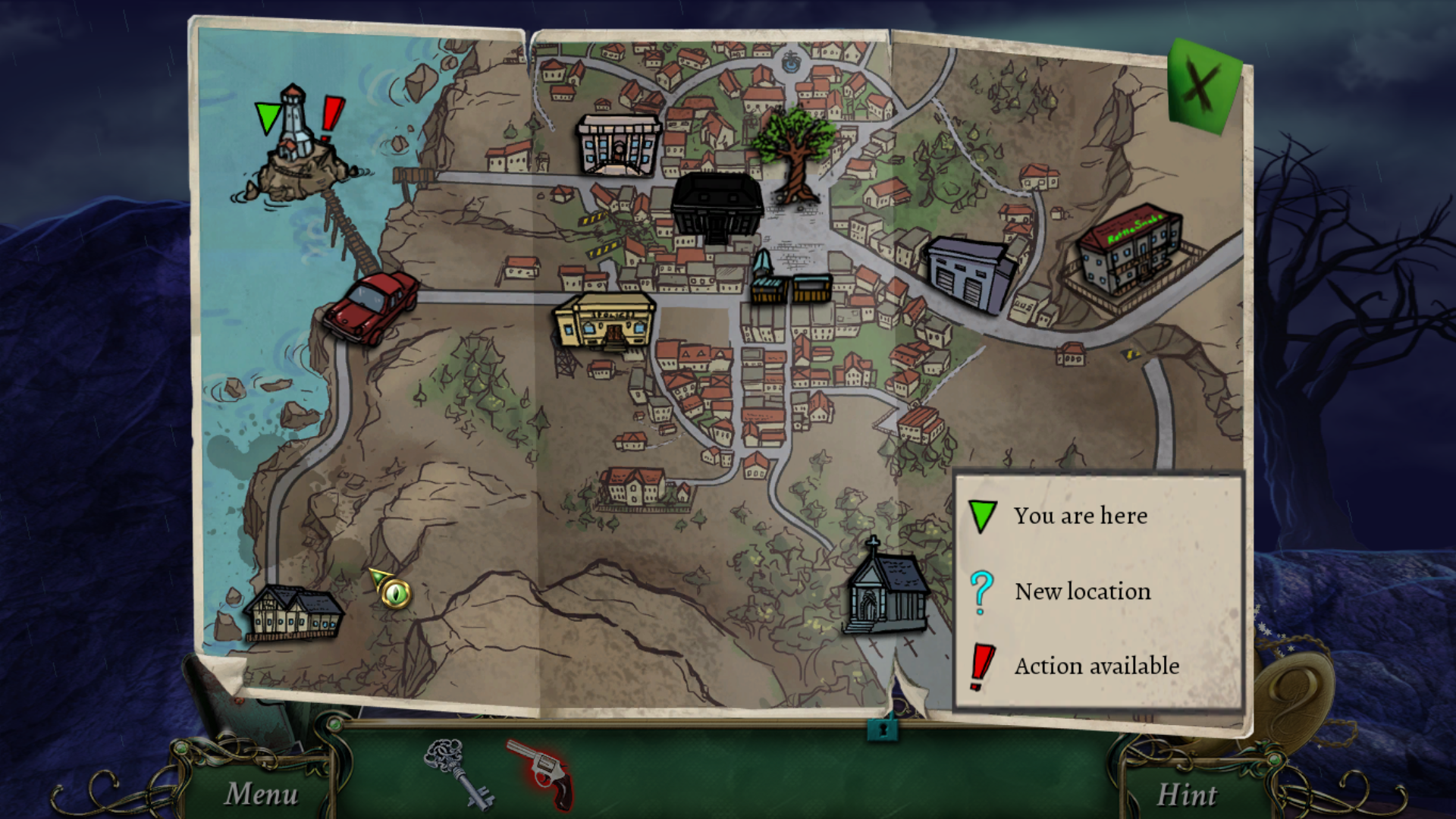 I don’t want to be racist but choosing Mr. Black as a character name it’s not a good thing to do, there are tens of thousands of other names, even random.org could’ve found a more appropriate one. Seriously who came up with the idea of this name?! (If you know the history of this name and how it became to be used please leave a comment below and make it clear to me).

As a side-objective there are a set of collectibles, more exactly 9 interrogation marks hidden throughout the city of Serpent Creek. Very cool feature for completionists, but it doesn’t have a great implementation. The game is story driven open-world so they could have given the players that finished the story the possibility to explore Serpent Creek again in order to find the remaining collectibles. Also. I would have made the hidden objects scenes a little harder, the objects were easy to identify and for mouse spammers it was insta-win.

9 clues 2 it’s the second game in the 9 clues series. This time you are accompanied by detective Owen, one of the secondary characters in the first installment. The company he’s giving you brings not only more realisms to the plot, but at the same time it contributes to the dialogue of the game. Compared to the first game this feature gives the game a more psychological style and finally it gets rid of that stupid cliché of going alone to save a friend who called you for help.

This time the devs choose to make the detective mode a little more complicated, there’s one more step you must complete before constituting the crime scene and that’s it to arrange the tiles in order. That’s not the only thing new, now if you are bored of the classic hidden object scenes where you must find a list of random objects you can choose the alternative, and that’s it, yep playing mahjong. When I saw this I was confused as hell, why would you use that much precious time to program this when you can use it to improve other aspects of the game. 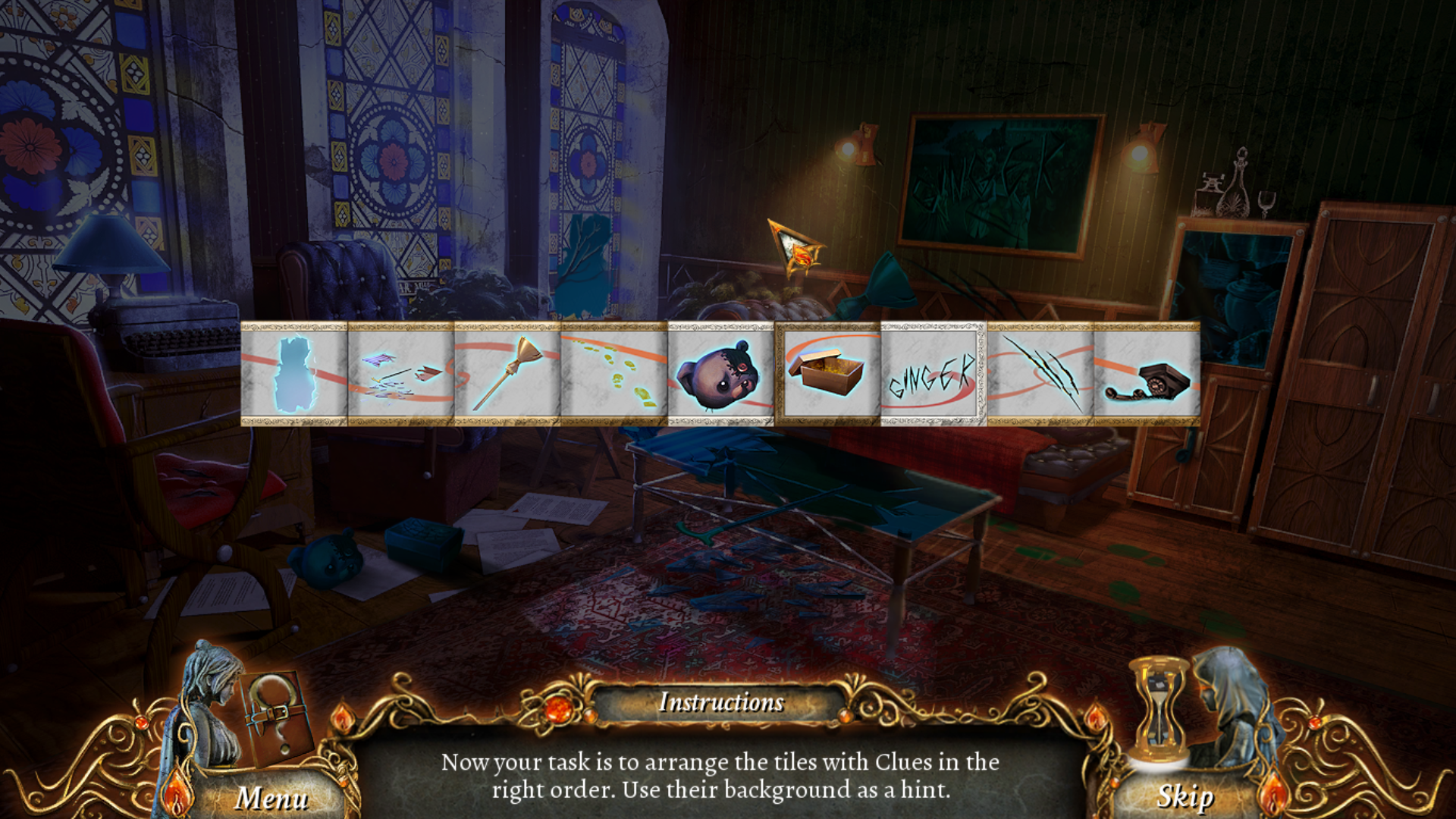 The voice acting is a little improved, there is a greater variety in characters and each has a slightly different accent. There are facial animations, half of them being really realistic, but half of them were terrible and full of strange movements of the head.

As a pro I appreciate that they managed to improve the puzzles difficulty while maintaining the player’s interest. I admit that I got stuck here and there; stay calm, the skip button is inexistent for me. But in case you got stuck and you don’t want to “finger” the puzzle there’s the skip button for you or if you’re me just write a backtracking program to solve it for you (or at least I tried, not sure what I was missing).

Very cool, much more characters than the first game, but seriously do we need Marvel references? Below you’ll find a reference to Nick Fury and Wolverine (maybe a combination of Wolverine and Scarecrow from DC, not sure now). 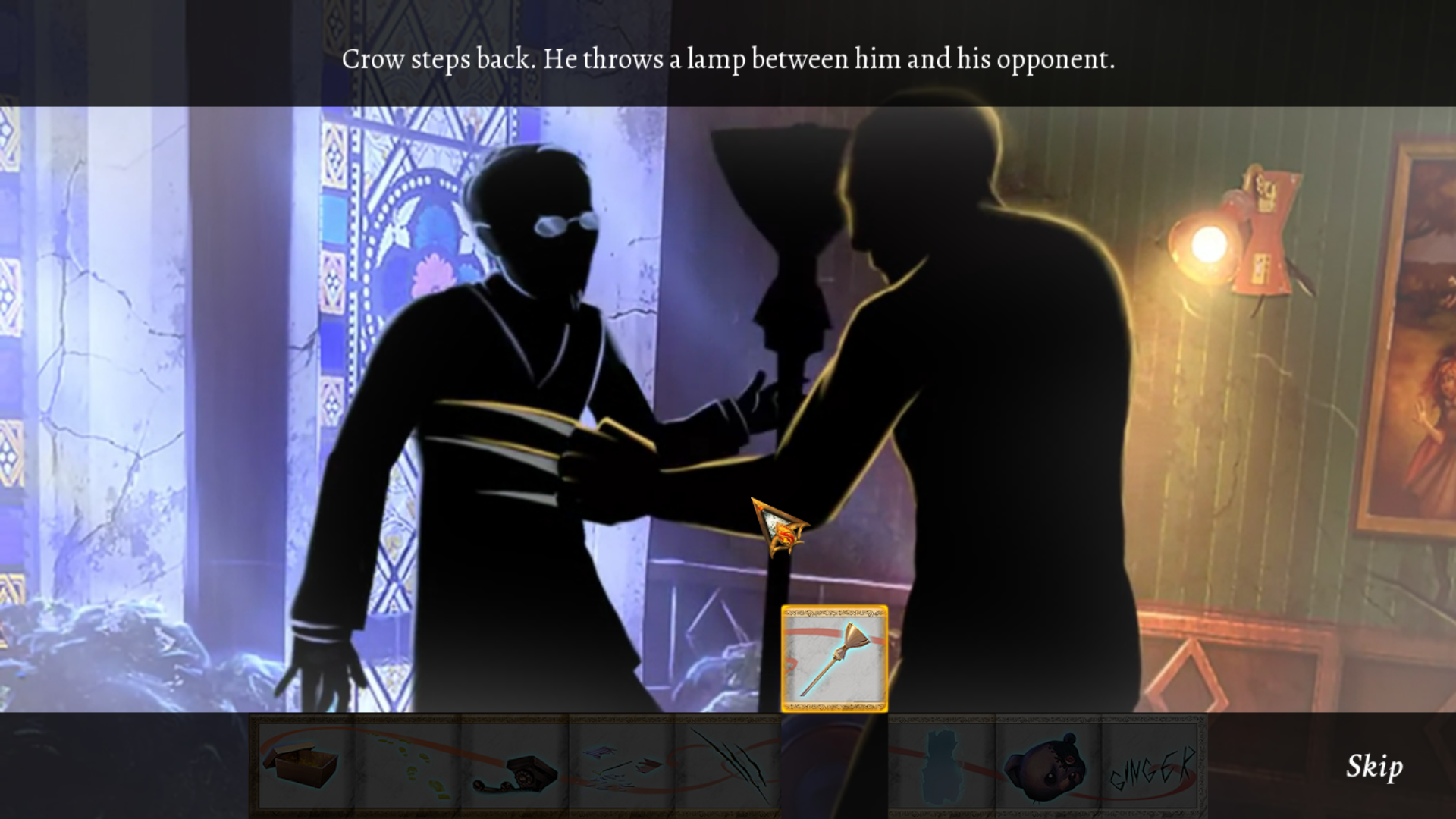 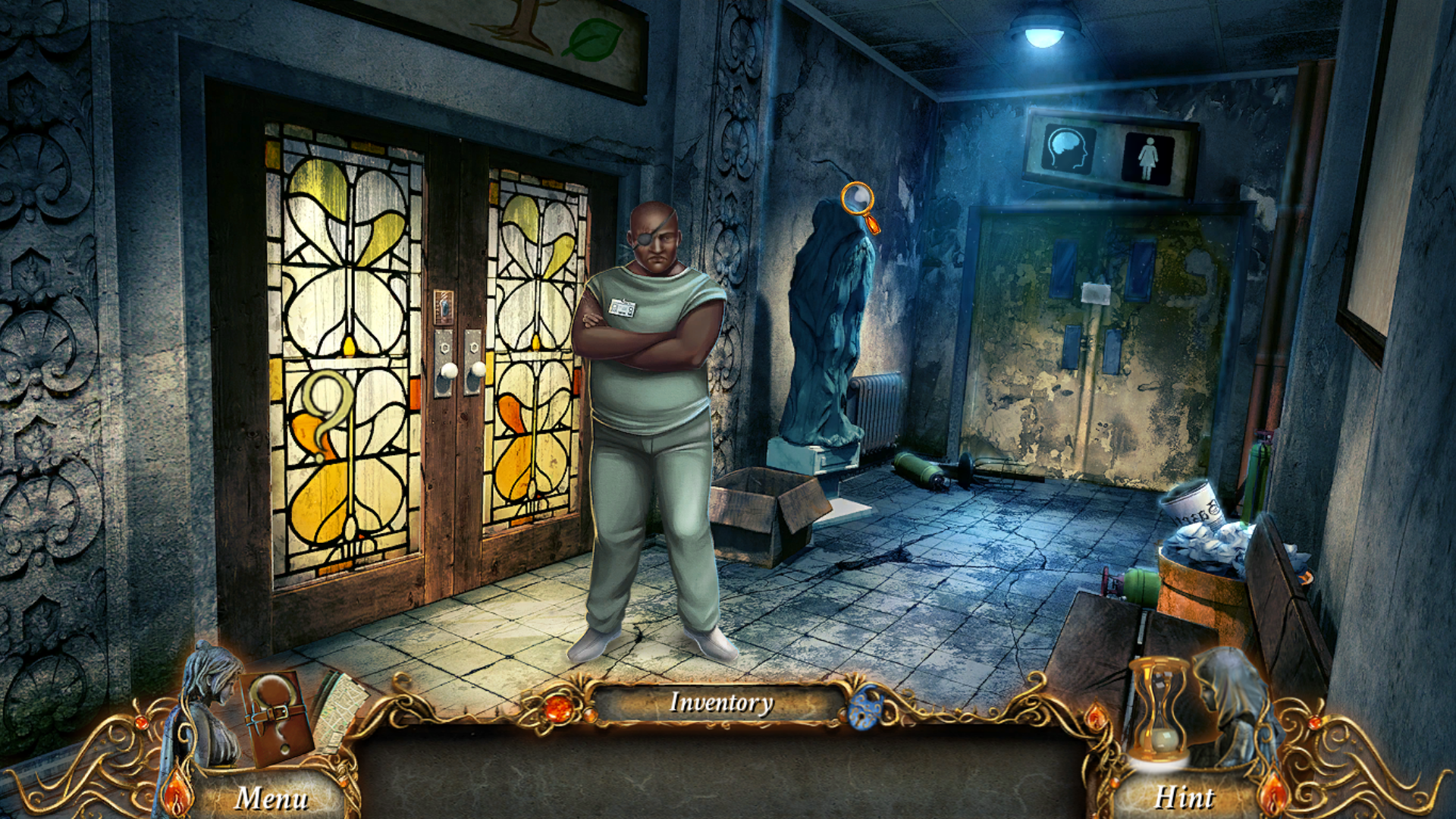 The game feels to hurried, both in term of the duration of the action and both in terms of development. As of gameplay it's almost twice as big as the first game. Unfortunately, with the addition of extra characters they also added those "mini-quests" to keep you busy. If you know those kinds of games, you take an objective follow it and then find someone who asks you to do something, that's exactly how they've done this. This is complete nonsense, most of the objectives are like this and after you complete it you find an extremely random item that's helping you on the quest somehow. The map too is worse than the first game one, less intuitive. It has even more collectibles, but there's no possibility to get back in order to find them so it will make you feel rushed into the story.

i recommend the first game, mostly because of it's simplicity, yet having a good plot and it can keep anyone entertained during the action. The second one was a dissapointment from my point of view, mostly because of a different plot and there's no reference to the first game at all, aside the same Owen man. Also, the objectives of the sequel made me feel like a slave, helping crazy people just to be helped by the crazier devs hidden objects.