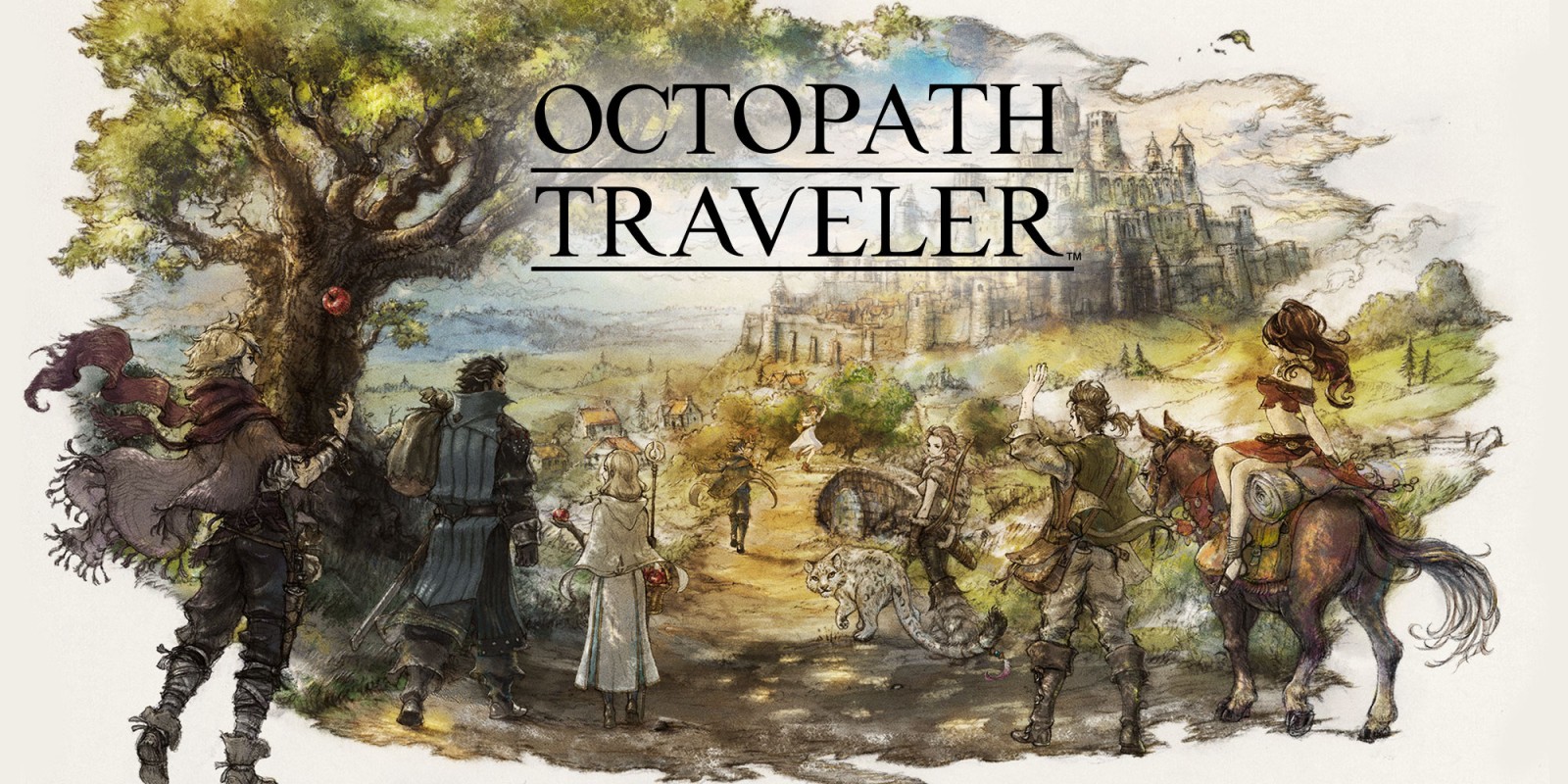 I have been patiently waiting for Octopath Traveller since it was announced as 'Project Octopath Traveler' back in 2017, and I'm happy to say that the wait is nearly over: next week we will all be able to get our hands on this beautifully crafted RPG and delve into it's world and stories.

If you haven't heard of it, or are unsure whether to get it or not, there is currently a Prologue demo on the Nintendo Switch eShop where you can play the first 3 hours of the game as any of the 8 protagonists. I played a little bit, just so I could decide who I wanted to start as with the full game; I did not continue the Prologue demo however, as I want to experience it all without any cliffhangers or more anticipation. I'm already excited enough Nintendo.

As with any classic JRPG, Octopath really focuses on the combat and dialogue to advance the story. Each character has their own personally story, their own passive skills (or Path Action), and their own advantages in combat; and I have to say, the combat is very well-crafted, reminding me of the combat from I Am Setsuna or Lost Sphear, only better.

So, who are these characters you can follow, and which backstory will you immerse yourself into?

Now Olberic is your typical run-of-the-mill Knight, all flustered up because the liege he swore to protect was killed or whatever. Basically it's a grumpy boy (man) coming back out of hiding to exact revenge. Nothing overly special, I know, but fans of this sorts of character will surely enjoy him, and I have no doubt that Square Enix will push the boundaries to make sure he isn't the cliche I'm expecting.

Olberic's Path Action is being able to challenge any NPC to a Duel. If you love to fight, he's your boy.

Cyrus was once an instructor at an academy before losing that position. He then sets out on a quest to find a missing tome. I have no doubt that during his story, you'll have plenty of chances to hear about how great he is, and how important he once was, and why he's better than you.

I don't think I really need to explain any more about Cyrus; you know what kind of guy he is.

I mean, Cyrus' Path Action is being able to Scrutinise people. Come on!

But hey, we never know, Cyrus could slowly open up to us and show us that he's not all that bad. He might eventually show compassion, or put another before him. Maybe he used to be nice and selfless, but some turn of events caused him to close up and only trust in himself ans his books?

Speaking of self-centred jerks, please welcome the cockiest of them all: Therion!

We're not off to a good start with characters here but trust me, there's nicer ones.

Therion is a thief, and a pretty good one at that. He is infamous across the land, and strikes fear into the hearts (and coin-purses) of the wealthy. He knows he's good and he'll take any chance to prove it, stepping up to even the most seemingly impossible heists.

His Path Action is, 'surprisingly', Pick Pocket: as Therion you will be able to steal from the belts of any NPC you fancy, earning yourself the true Thief rank in this RPG.

Taken in as a child, and now a servant of the Order of the Sacred Flame, Ophilia must set out on a pilgrimage to restore light to the realm, as the ritual continues. She carries a lot more emotion with her backstory, and is a character determined to do all she can to repay the hospitality of both her adoptive father and sister, and the Sacred Flame.

Ophilia's Path Action is to Guide: she can guide NPCs, either to help them out, or for her own aid. You'll need a certain amount of skill to guide certain people, but all will respect a Cleric of the Sacred Flame.

Once the daughter of a Nobleman, Prim now works as a dancer in a run-down town of low-lives. But this didn't just happen. As a child, she witnessed 3 assassins kill her father; each man baring the mark of the Crow.

She cast aside her title, and looked to gain vengeance for her father. The most effective place to hide and wait was a tavern in a small desert town, where people would go to watch the dancers. The 'master' quickly took a liking to her, and raised her to become the best dancer, of which she did. Now, as you jump into her story, the time has come to once again leave it all behind in order to seek out the men that killed your father.

Primrose's Path Action is Lure, in which she is able to Lure NPCs, either for assistance or advantage. You could lure someone to help you in a tough situation, or similarly lure a guard away from a post, or lure an unsuspecting person to their inevitable doom?

Needless to say, the possibilities are many.

Now we move on to a simpler story, and simpler boy: Alfyn was raised by his mother in a small forest town, and was once saved by a travelling apothecary who asked for nothing in return. Alfyn quickly decided that he wished to follow in that traveller's footsteps, so that he might too help those in need. After his mother's passing, Alfyn gets lost in thought of bigger things: what if he could too traveller to help those outside of his village, all around the lands. A decision he must make.

Alfyn's Path Action is Inquire, in which he might use kindness and persuasion in order to find things out from NPCs, or likewise acquire items from them. Alfyn is my personal favourite out of the roster, and I will be going with him in my first playthrough.

Working at her parents shop in a harbour town, Tressa too dreams of bigger things. She wishes to travel the lands and to explore all there is to see, expanding her knowledge in trade and culture as she goes. She despises thievery and wishes to stop the act altogether. She is also a very happy and innocent-seeming girl, but will stop at nothing to continue on her endeavours. I can't wait to see how a meeting between Therion and herself will pan out.

Tressa's Path Action is, of course, Purchase; she is able to haggle with NPCs in order to acquire unique items, and likely information. As she grows in her trade, she will become much more effective at getting what she wants. If you like shopping and adventure, then I think we have found the character for you.

Last but not least, we have H'aanit, a huntress who has not heard from her master in a long time. One year ago he set out on a hunt, and now H'aanit will track his path in order to find out his fate. She will not travel alone, however, as she is accompanied bu her trusty Snow Leopard. She comes from a small Nordic Village deep in the forest, and takes pride in what she does.

H'aanit's Path Action is Instigate, of which allows her to take control of various beasts and animals, as well as challenging people into fights. However, if she fails her Path Action, she will surely lose reputation with whatever NPC on which the attempt was made.

FUN FACT: If you read the character names in the order I have placed them, they will spell out OCTOPATH. Pretty sweet, right?

Well there you have it, all eight character that will be available to you on your journeys through this new and interesting land. I can't wait to dive into the story of Alfyn, and I will also seek out Ophilia to join my party. The only choice I'm pretty torn between now is voiceover: The Japanese voices are really cool to listen to, but the English voice acting in this game is actually pretty decent! Not usually the case in many JRPGs to be honest, so it's a nice addition.

Either way, I can't wait to finally play this game.

Also, that Compendium Edition though.

As an avid gamer and writer, I'm set on writing for as long as I can, in as many places as I can. I'll be frequently writing about the industry news, games, reviews and my general thoughts.

I've been playing video games my entire life, and I will never stop loving the work and art that goes into them. I enjoy writing about both relevant and irrelevant things. Once day it might be a new game review, the next it might be my thoughts on a PS2. Who knows?

Be sure to follow and leave your thoughts too, and I look forward to writing all over the internet!