BoB: I Was An Atomic Mutant

Ever wanted to be a giant baby? Wait, let me rephrase that. Ever thought you were a giant slimy alien baby? No, not the baby Metroid.

I Was An Atomic Mutant (Canopy Games/ValuSoft, 2003) on PC has you covered. It also lets the player be a "she-beast" (giant woman), a floating brain (the brain from beyond infinity) and a giant reptile. But surely it's more fun to wreak havoc on small towns and military bases with a giant robot with long limbs dishing out death and destruction than a giant ape and a lizard? (Truthfully, it isn't.)

But now, we focus on the Invader from Dimension X: an infant torn from their home dimension by the atomic power the humans so carelessly wielded. The robot comes into play as what the baby controls. 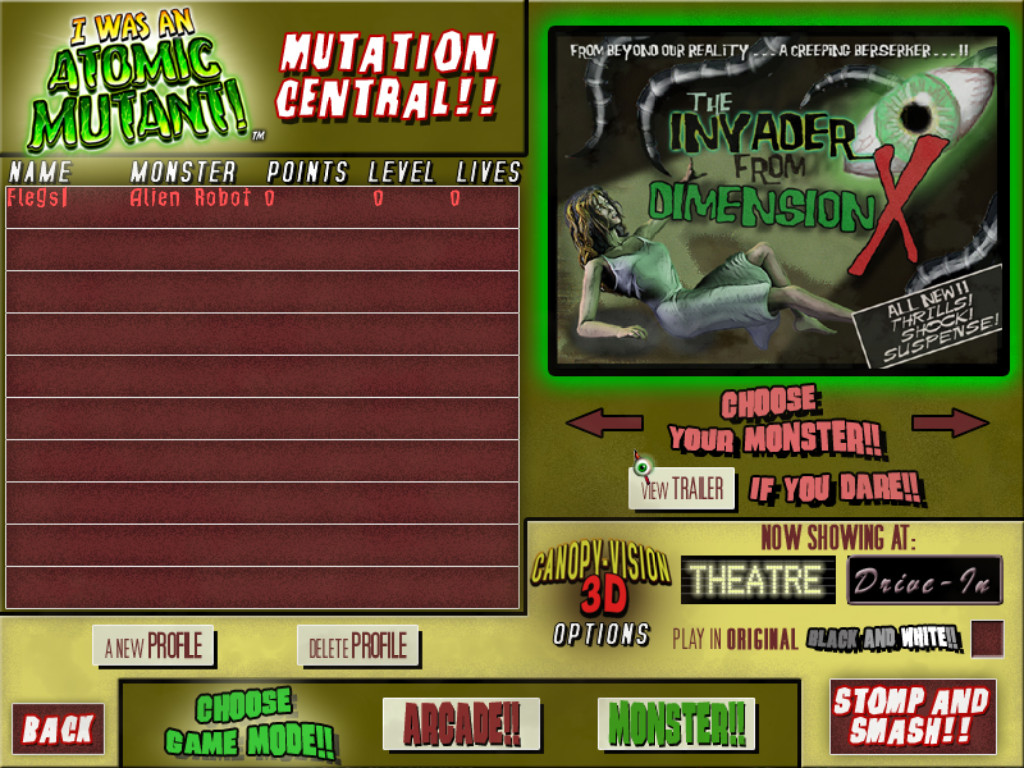 The menus fit very well with the theme. This is also the maximum resolution supported by the game (1024x768).

The idea for the game is more exciting on paper than the actual game. This is because, well, ValuSoft was a low-budget game publisher and Canopy Games had quick development cycles (or so I think I read ages ago) and their games weren't impressive. In case of IWAAM, it seems to have been in development for four and a half months.

Alas, that shows in the actual game.

First off, there is no story. No story that really matters, rather. The PDF manual says the alien is actually just an infant in a robot. The swell trailer doesn't say much, but at least it doesn't contradict the manual like in the case of She-Beast.

The goal is simple: destroy all structures, then do the same in the next level. If I remember correctly, there are about 30 levels in total that'll repeat in a loop. 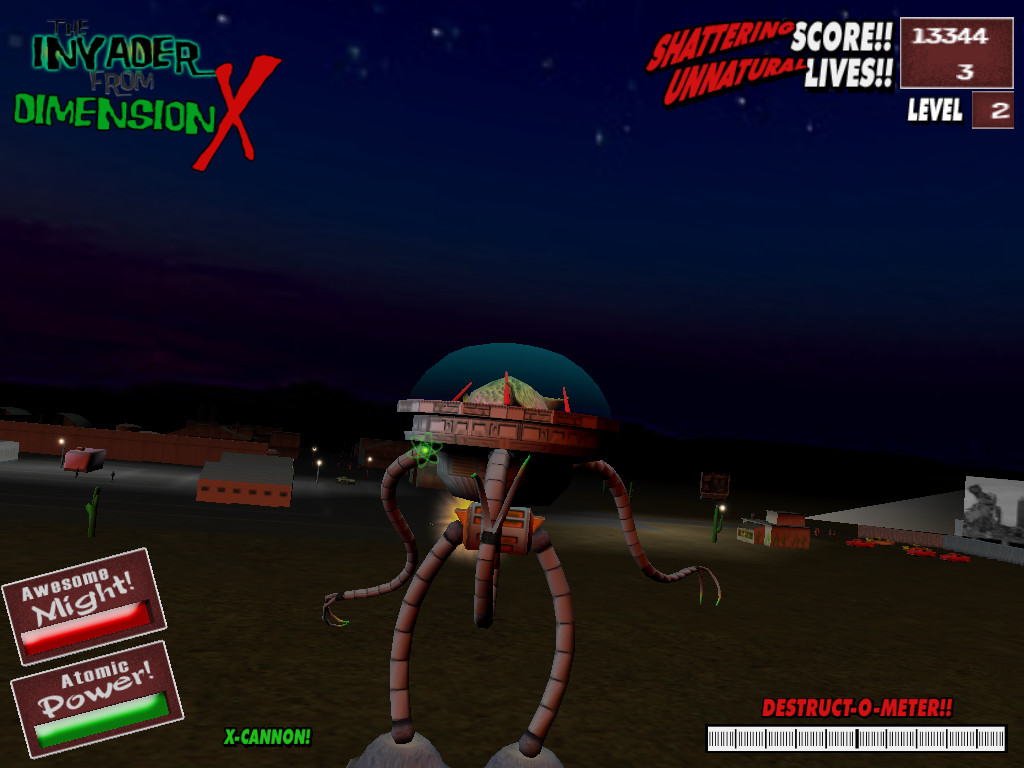 The atom icon is the aiming reticule. Unsurprisingly, aiming at targets in front of the player is a bit challenging.

I may remember my time with the game wrong, but I don't think the power meter recharged this quickly fifteen years ago. Likewise, non-stop attacks like death rays drain all of the power in a fraction of a second, which makes it near useless outside the "Monster" mode, where the player has infinite attack power. (The game did get a patch, but I didn't go looking for it.)

The Invader has a few attacks: a projectile attack (X-Cannon); a "tenticular thwomp of titanic tonnage" (X-Bash), i.e. smack all arms to ground to do a lot of damage all around you; pick up and throw cars, people etc., death ray (which, as said, dies out in less than a second now), and a more powerful melee attack. As it happens, there's little difference between the playable monsters. But at least all are unlocked from the start. 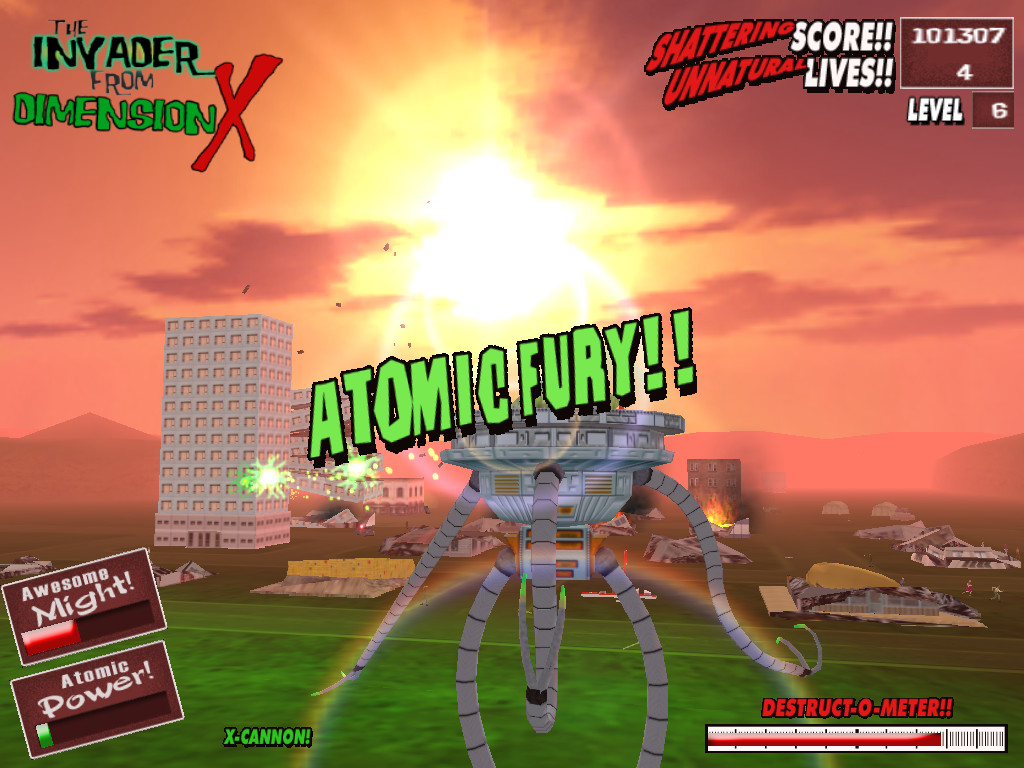 A building is being destroyed in the back. EDF this ain't, but at least it uses Havok.

As you could expect from a budget release, the graphics aren't very good. As the monster walks, people and vehicles near it jump up and down. No jumping animation, they just move up and down. From pedestrians to tanks to gun emplacements. Well, it is a 2003 game, but still. The corners of the skybox are also blatantly obvious and the camera may clip through the mountainside if the player is too close to it. And somehow, cacti block the monsters from walking over them.

There are a few more tricks: option to play in black-and-white and the "Canopy-Vision 3D" -- a very much unplayable camera view. 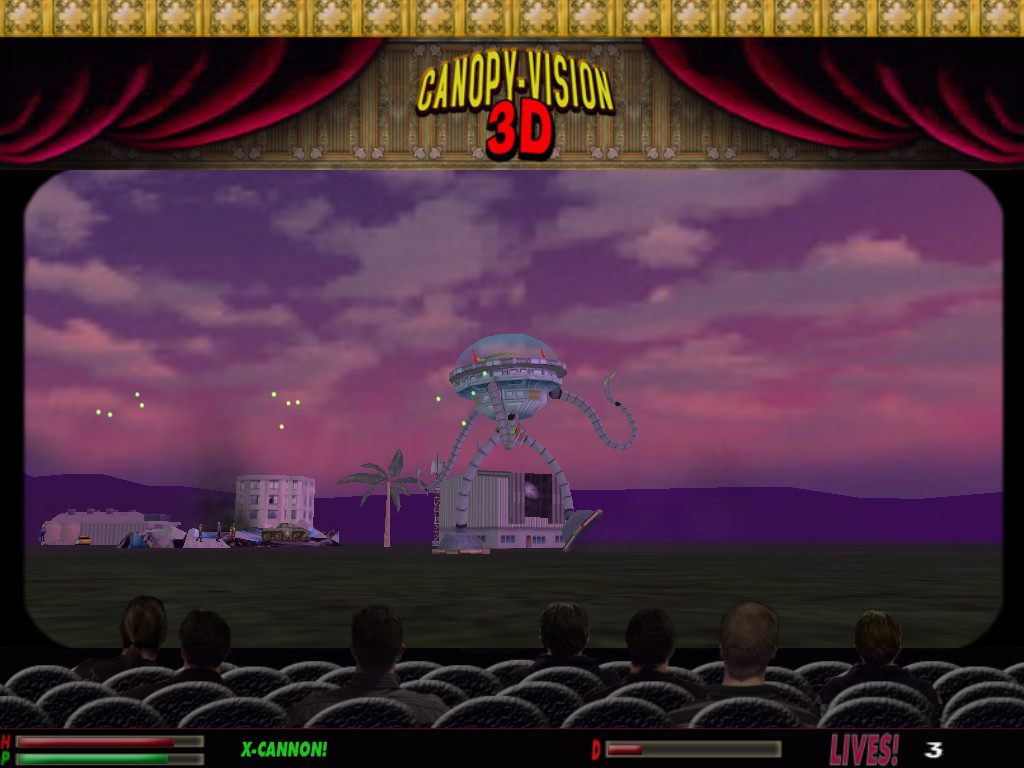 Not the viewing angle you want to play in. I wonder if those are the game devs...

The people will scream on the background and the player will hear calls for bombers. The music is similar dramatic music as in the trailer. So far kind of decent.

But worst of all, the gameplay loop is sorely lacking. All the different enemies (fighter jets, bombers etc.) will have shown up sooner than later, and the winning strategy will have revealed itself: stay in a distant corner, shoot down the planes and once they're dealt with, start whittling down the buildings and enemies from far away with the default ranged attack. Easy, safe and utterly pointless.

I think I gave up my longest run around two loops into the game out of boredom. The game saves the progress between stages, though, so it's better than some other game I could mention.

As such, there's no goal to aim for nor a real reason to play after a few hours.

In summary, while this is the only time I recall seeing an embossed cardboard sleeve around a game's DVD box and the attention to detail and the theme permeates the game's menus, the actual game itself isn't a good one.

There's an interesting what-if scenario with this title, though. IWAAM was priced at $20 in stores. It was released around February 2003, seven months before Valve's Steam had its official release and well before third-party software was available on Steam. Would something have happened differently if this had been on a digital download service?

Most of Canopy Games' staff have few, if any, credits past 2008 listed on Mobygames. This may have been one of their best games. Chances are Initial D: Mountain Vengeance (Canopy Games/ValuSoft, 2004) was not.

ValuSoft kept releasing games well into Steam's lifespan; the last ones Metacritic attributes to them (Angry Birds Star Wars, Bad Piggies, Great Big War Game) are from 2012, a few months before their parent company since 2002, THQ, went under.

As it happened, four months after IWAAM's release Chikyū Bōeigun (Sandlot/D3, 2003) was released in Japan as a part of the Simple 2000 series for PS2. A year from IWAAM's release, that game saw its European release as Monster Attack. In hindsight, I believe I would've been happier with the first game in the EDF series for a game featuring giant monsters than IWAAM.