Taking out the Trash-Metal Militia

Crush your enemies...that's one way to do it. 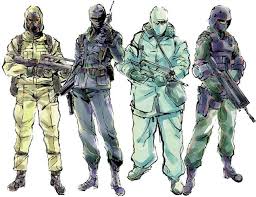 Games these days give the player a variety of ways to dispatch their enemies, be it guns, baseball bats, chainsaws, spells, vehicles, flamethrowers, explosives, ect; but only a few give us an open assortment like the Metal Gear Solid series. You can put a man to sleep, strap him with C4, throw him over a wall attracting other guards them blow them all up. Don't like goats? Rig one to explode and scare it into that enemy convoy.

With Metal Gear however, it's not just the grab bag of fun ways to dispatch your enemies. They are obviously disgusting mercenaries for hire and have no qualms about dispatching anyone. Not good for...anyone. They all dress similarly through every game, and while they have evolved; nothing gets me more than that sudden "!" above one's head just before a flying rocket arm punches them in the face.

These goons follow the likes of the craziest villans on Earth and don't seem to have any problem with it. We need some giant mecs to ravage a city so that we can use a tiny portion of it for expolitory purposes? No problem boss, we'll just blow up that school. No questions asked, no regrets. They even hang out just in case anyone desides to slip in.

So while there are plenty of other horrible forces to kill, none give me quite as much pleasure as calling in a tank to be dropped on a pesky merc just staning in the street having a smoke.

Rob of Clan Gilchrist is an author, director, father and destroyer of worlds. Not big worlds, small ones, that were really more flatulence than world. He writes about stuff other places, and now writes here too.