It’s funny to think that there was once a time when video games were looked at more as something for the kiddies, rather than the “serious business” it is today. It was yet to be seen as a medium ripe for storytelling, and I can only imagine that few people thought their works would blossom into the titanic franchises they are today. This puts the late 80’s and early 90’s in a magical sweet spot before the industry gained any confidence and cohesion, and was still trying to figure out the best way to monetize and license their creations.

The cartoon adaptation of The Legend of Zelda hit in 1989; two years after the release of the original game in North America, and a few months after its sequel, the Adventure of Link. It was tacked onto half of the Super Mario Bros. Super Show every friday, giving it a run of 13 episodes at 15 minutes of length. Like many products of the 80’s, it was tacky as hell. 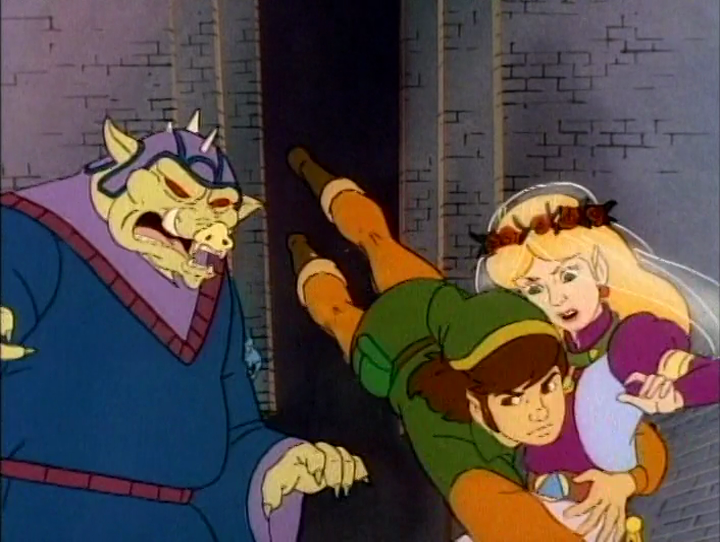 BRING ME THE TRIFORCE OF WWWWISDOM!

When talking about the plot of the series, it’s important to remember that only one game had really established itself during the cartoon’s production. This means that while many of the game’s elements are in place, many others are missing, or presented in a way that is divergent from the way they’re depicted in their current form . On top of that, the framework as a whole is wildly different when held up next to the conventions that were even established in the first game.

The story follows Link and the eponymous Zelda, as they attempt to protect the Triforce of Wisdom from Ganon, who in turn holds the Triforce of Power. Zelda’s voiceover at the start of every segment states that whoever holds both Triforces (yeah, the third one was introduced in Zelda II) will rule Hyrule, but it never says how. In fact, the story lacks a great deal of background about how we got here. It’s unknown how long the battle between Hyrule and Ganon has been going on, or why Link was brought in to protect the Triforce; everything just exists in a vacuum.

It’s actually kind of bizarre. As early as the second episode, Ganon actually gets his hands on the Triforce of Wisdom and places it next to the Triforce of Power and… nothing happens. When Link and Zelda finally recover it, Zelda makes an absolutely impotent attempt at taking the other Triforce with them, but the seemingly all-powerful artefact isn’t worth risking her neck over, and she’s forced to retreat without it. The stakes are so low, that it brings up the question of whether or not this is just some game of capture the flag for the characters. 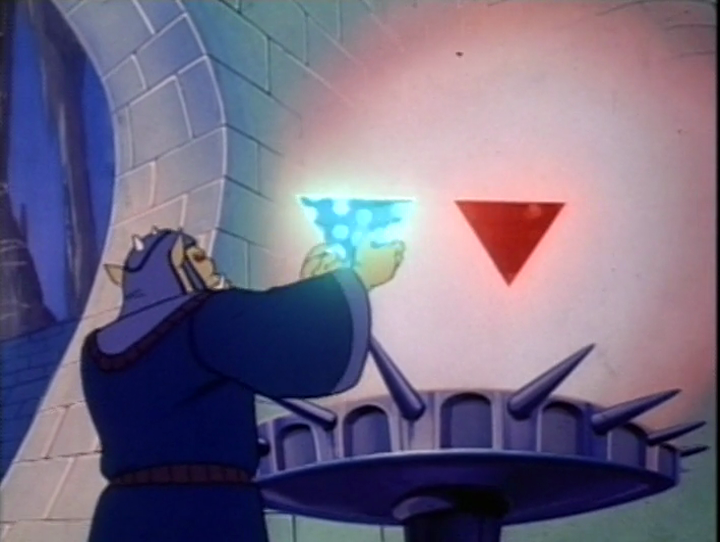 That feeling of inconsequentiality pervades through to the characters, most of whom are absolutely horrible human beings. Link is portrayed as a lecherous egomaniac with few redeeming qualities. His stake in the whole affair is the potential for getting into the Princess’s pants, and he constantly fishes for praise and smooches whenever he does something slightly meritorious. Even despite his coveting, he’s not committed. In the episode “Kiss and Tell,” he rescues (sort of) a damsel who promises to reward him with a kiss, and he’s immediately all about her, even going in for the smooch directly in front of Zelda.

Not that Zelda is innocent. In the episode “White Knight,” she falls head-over-heels for a dashing adventurer who comes to her rescue. She then proceeds to treat Link like absolute crap, once again insinuating that the Triforce of Wisdom is some peripheral responsibility that carries no great importance. Like I said, they’re both horrible people. They totally deserve each other, and in that way, their relationship is somewhat believable.

What makes things weirder is that they’re the only consistent residents of Hyrule. In the episode “Cold Spell,” Link fakes an illness to try and get out of having to help clean the castle. I mean, I can’t say I blame him, since that’s not his job. He’s supposed to be protecting a magical weapon of mass destruction. More importantly, though, where the hell are the people who do have that job. Are there no servants in the entire kingdom? Even the princess is doing chores, which, I mean, it’s nice to know she’s not above such drudgery, but where is everyone else? You rarely see any residents hanging around; even castle guards are only glimpsed occasionally.

There are two other recurring characters: The King and Spryte. The King somehow manages to have even less concern for the magical superweapon he keeps in his attic and rarely gets involved with the adventure. He also seems to have no issue with Link constantly trying to get fleshy with his daughter, and seems to encourage it at times. His absent-mindedness is actually a welcome vacation from the aggressively shallowness of the rest of the cast.

Then there’s Spryte, a fairy who has her mind on Link’s dink. She sometimes comes across as even more perverse than the adventurer. At one point, she intrudes on his bath time and vocally expresses her pleasure in seeing the nude wanderer. At least Link hides his lust under the pretense that he’s just looking for a peck. At the same time, it’s easy to feel sorry for Spryte’s feelings of unrequited affection. Despite her unwavering care and loyalty, she’s constantly dismissed by Link, which I can only assume is because of… logistical complications when it comes to her size. 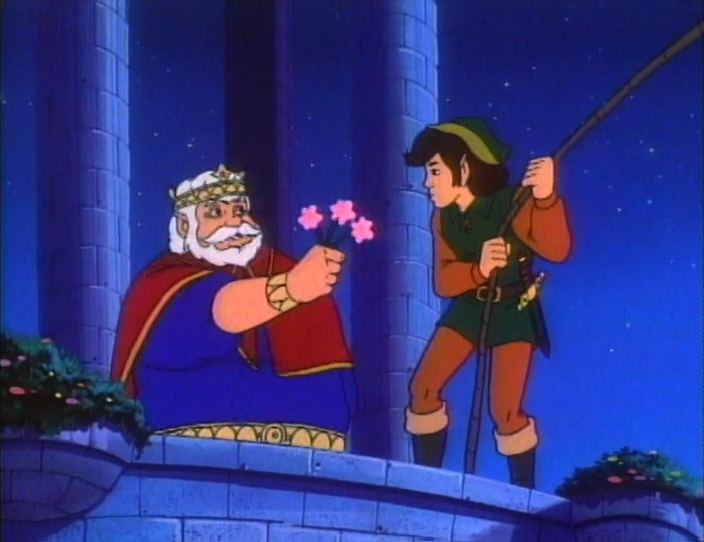 The King is the real catch.

Actually, it’s maybe those reasons that makes The Legend of Zelda so watchable. Your standard episode revolves around Ganon’s latest plan to steal the Triforce of Wisdom, and he seems to be putting as much effort into capturing it as the heroes are of protecting it. A story will typically start off with him making some token effort by sending any generic grunt to sneak in through the window and steal it away. Only when opportunity presents itself does he ever try something else.

Again, it’s pretty predictable what he’ll do. He either uses some magical artefact, such as a magnet that pulls structures from the overworld to the underworld, or a bitching unicorn that he jacked, or he’ll straight up try and capture one of the principal cast to hold hostage. Actually, even when he has a kick-ass unicorn, he still just tries to capture one of the principal cast.

None of his plans hold up to direct confrontation, which adds to a long list of evidence that Link is trying to draw the conflict out longer to maintain his tenure with Zelda (in fact, that last line in the whole series is him expressing relief that he still has a job). In combat, Ganon rarely does anything effective before Link or Zelda incapacitates him or makes the roof collapse. Yet, despite how poorly he does in a shoot-out with the princess, he still insists on locking her up in his bedroom. And while the heroes easily overpower him, they only once make a move on the Triforce of Power. It’s like they just exist to tease Ganon.

I’m not the only one who realizes how ineffectual Ganon is. In the show’s final episode, his minions launch a mutiny after getting fed up with his obvious impotence. It’s kind of a neat hook, but like all backseat dark lords, they quickly realize that they require oversight to function, thus restoring the status quo.

By many measures, The Legend of Zelda is kind of a trainwreck, but like any trainwreck, it’s difficult to look away from. A lot of its charm comes from how far off the mark it is, and not just with regards to its faithfulness to the source material. None of the characters seem all that committed to the central conflict, giving the whole narrative this pervading smell of triviality. I kind get the feeling that Link and Zelda were given a useless bauble to protect to keep them distracted while, elsewhere in the world, a much more interesting and important conflict is underway.

It’s also glazed with 80’s cartoon goofiness. Link never really uses the blade of his sword, instead going out of his way to just blast enemies with a beam from it (which, amusingly, makes the sound effects from the game). Defeated enemies never die, instead they’re sent back to the hilariously named “Evil Jar,” where they’re lectured by Ganon for their incompetence. The animation is crappy in that awkward 80’s way, which feeds my love of picking out animation errors. My favourite mistake that the series made repeatedly was having a different character lip-sync with someone else’s line. Still, the inclusion of the NES sound effects is rather neat.

At its worst, The Legend of Zelda is watchable, and at it’s best, it’s so bad that it’s good. Intentional or not, the fact that the heroes are so flawed makes them strangely compelling, and the lighthearted inconsequence of the plot provides something that is easy to get into. It manages to make great use of its 15 minute runtime, somehow avoiding the feeling of compression that typically comes with the format.  It’s a weird take on the classic game, and while it’s not at all faithful, it is fun. It’s a great show to watch in your pajamas with a bowl of cereal.One season was all that The Legend of Zelda would see before it was phased out and replaced with the next generation of shows in the Nintendo Cinematic Universe. Link and Zelda would later re-appear in the odd episode of Captain N: The Game Master, which helps conclude the series and, weirdly, helps build on their characters. But that’s a story for another day. 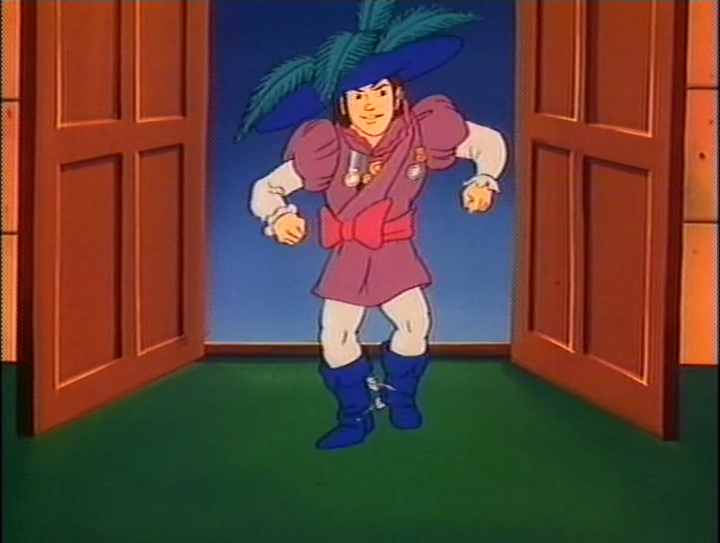