CONTEST/DRAWING- Not a drawing contest, but rather a Capcom/Smash Bros Brawl Contest Drawing.

As many of you know, last month I won some stuff in a Mega Man character design contest. I owe a lot of that to the D-toid community, as many of you voted for me. Thanks again.

I wanted to re-gift some of the prizes here to further show my gratitude to the 'toid. I did one contest already, but that was over too fast due to LostCrichton's ass kicking Wolfman movie watching skills.

So I'm doing this contest to make up for that. It's one that's sure to last at least a few weeks, maybe even until February. 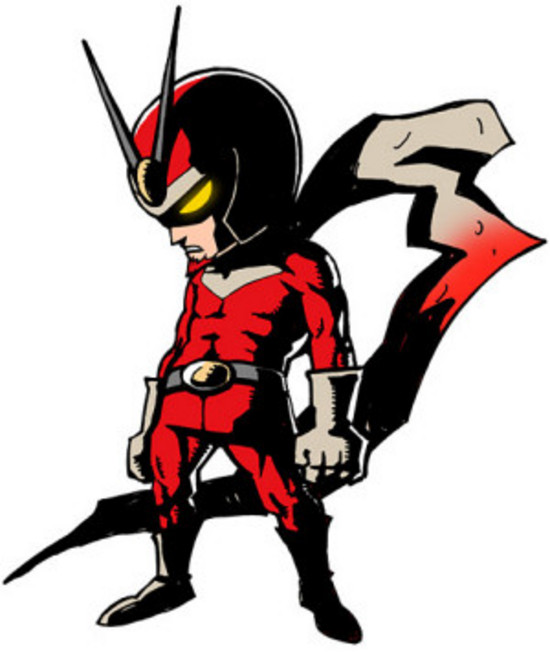 He's the definitive dark horse contender in this battle, but Viewtiful Joe has a lot more going for him than many may think. He's in a relatively popular television series. He's the most recent Capcom character to actually gain some popularity and get his own series of games going. He got his start on a Nintendo console. He's currently not in state of being over exposed, so his appearance would really be a surprise. And most importantly, he would fit in Smash Bros, perhaps better than all of the above mentioned Capcom stars. Like Smash Bros, the Vieftiful Joe games are 2D fighters rendered with 3D graphics. Like Smash they have a very weird, over the top sense of humor, simultaneously poking fun and paying tribute to many video games.

And Viewtiful Joe just looks like a Smash Bros character. It's an obvious fit.

So, those are the Capcom characters I think a have the best shot of being in Brawl. What does that have to do with a contest, or a drawing, or whatever hell this is?

Well, what I want you to do is post one of these character's names in the comments section of this thread. If one, two, three, or even four of these characters are actually shown on the Smash Dojo website to be playable in Brawl, I will then do a random drawing of all the people that "voted" for that character and send them a prize.

If Akuma is announced, I will give away a copy of Capcom Classics Collection Vol 1 for the PS2 to the winner of his random drawing.

If Jill Valentine is announced, I will give away a copy of Resident Evil: Deadly Silence for the DS to the winner of her random drawing..

If Mega Man is announced, I will give away a copy of Mega Man Starforce:Pegasus to the winner of his random drawing.

If Viewtiful Joe is announced: I will give away a copy of Viewtiful Joe: Red Hot Rumble on the PSP to the winner of his random drawing.

These are games I just have lying around my house. Some may be opened, some may not. I honestly can't remember. So don't be too sad if you win and your game is open or something. I can guarentee you that it will work, and that I never got no poops on it or nothing.

Each member of D-toid can only vote for ONE CHARACTER, and only vote once. So you can't vote for Mega Man, Akuma, and Jill, and Joe to compete in all four drawings. You've got to commit to one character, based on which one you think has the best chance, and which prize you want the most.

If I find out that any of you have started new D-toid accounts just to enter more than once, you will be disqualified both from this contest, and from life in general. You wont get to compete in things ever again, forever branded with the moniker "ass-munch".

And the winner of each drawing gets a drawing done by me of whatever they want. Boobs, butts, knees, I can draw them all with relative ease. But no buildings. Or cars. They're too hard.

If none of the characters make it in the game, then I will draw a name from all the contestants and give them surprise. Maybe even a puppy.

This drawing/contest ends when the Dojo stops updating, or when Brawl comes out, which ever comes first. Or I guess it would end if all four characters were announced to be in Brawl before the game is released and before the Dojo stops it's updates.

I wouldn't count that out, considering how crazy the Dojo's been.

If you have any questions, please feel free to PM me or ask them here. But do it fast, as Akuma, Mega Man, Jill, or Joe could be announced any day now on the Dojo, and anyone "voting" for them after they are already announced will obviously be disqualified.
#Community
Login to vote this up!