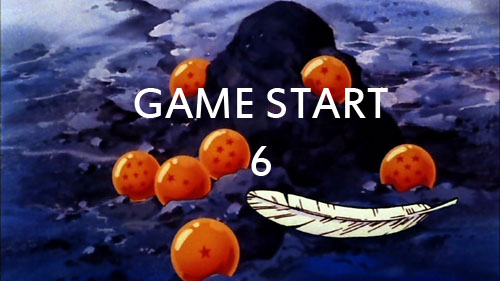 I really picked it up this past month! So much so that I'm even almost back on schedule for posting these blogs. It's supposed to be out the first week of the month - oops. Hooray for almost not being lazy!

Anyway, last time I talked about all the great projects that I'm looking forward to: like 3-D open-worlds and online multiplayer! I legitamately am excited about it, which is why this month I got more done than previous months. The fact the videos are paced well and not too confusing helps with keeping my attention. I remember buying a "Make a Flappy Bird Clone" video project and it literally did what it set out to do. Essentially, you mimicked everything he did, while he quickly said what he was doing. But this is not the same as explaining the concepts and ideas behind his actions. Believe me when I say I was miffed. Miffed I tell ya!

The instructors in the videos are very informative and receptive to feedback and even update their videos according to that feedback. They genuinely seem to care about all those who are in their course. They want you to learn but also want to know when something works, or doesn't, to make the course better.

The project that I completed this time was a text adventure - one of the earliest forms of gaming in the industry. The idea behind this was to get used to different 'states' and an entry into coding in general. I also was intoduced to the idea of making a GDD, a Game Design Document. It's a way to outline and plan the game and shows what gameplay screens you want to include. Here's an example they showed off: 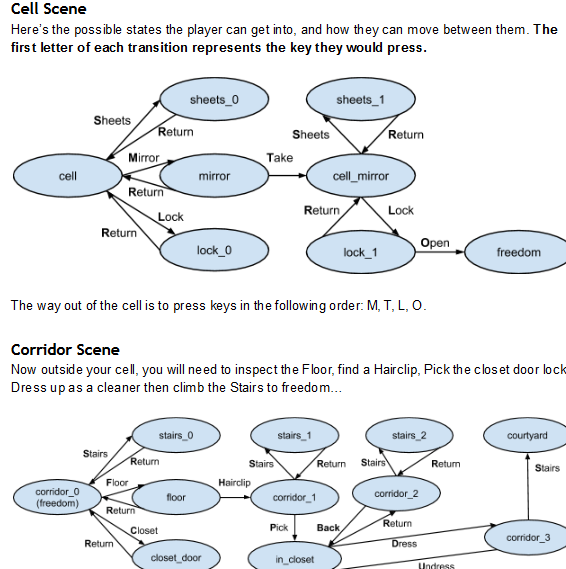 I personally cannot tell you how important it is to outline and document ahead of time. It'll make life so much easier to follow and execute. There's just so much code that can pile up on a single page and it won't be easy to follow unless you manually check each piece of code. I say this because that's what I'm doing at work. The project they have now- they basically told me that no one would know how it works unless you took time to follow it. So I was put in charge of documenting it so others can come in and start working instead of trying to figure out what the hell is going on. Their code is so scattered I swear my brain fried a several times trying to follow the logic they had.

For whatever reason I'm more comfortable with pen and paper when it comes to documenting or planning, so I did that here when thinking of different states for each decision and path. Obviously you wouldn't want to use this setup when doing bigger and more complex games, but it works here for this small game. 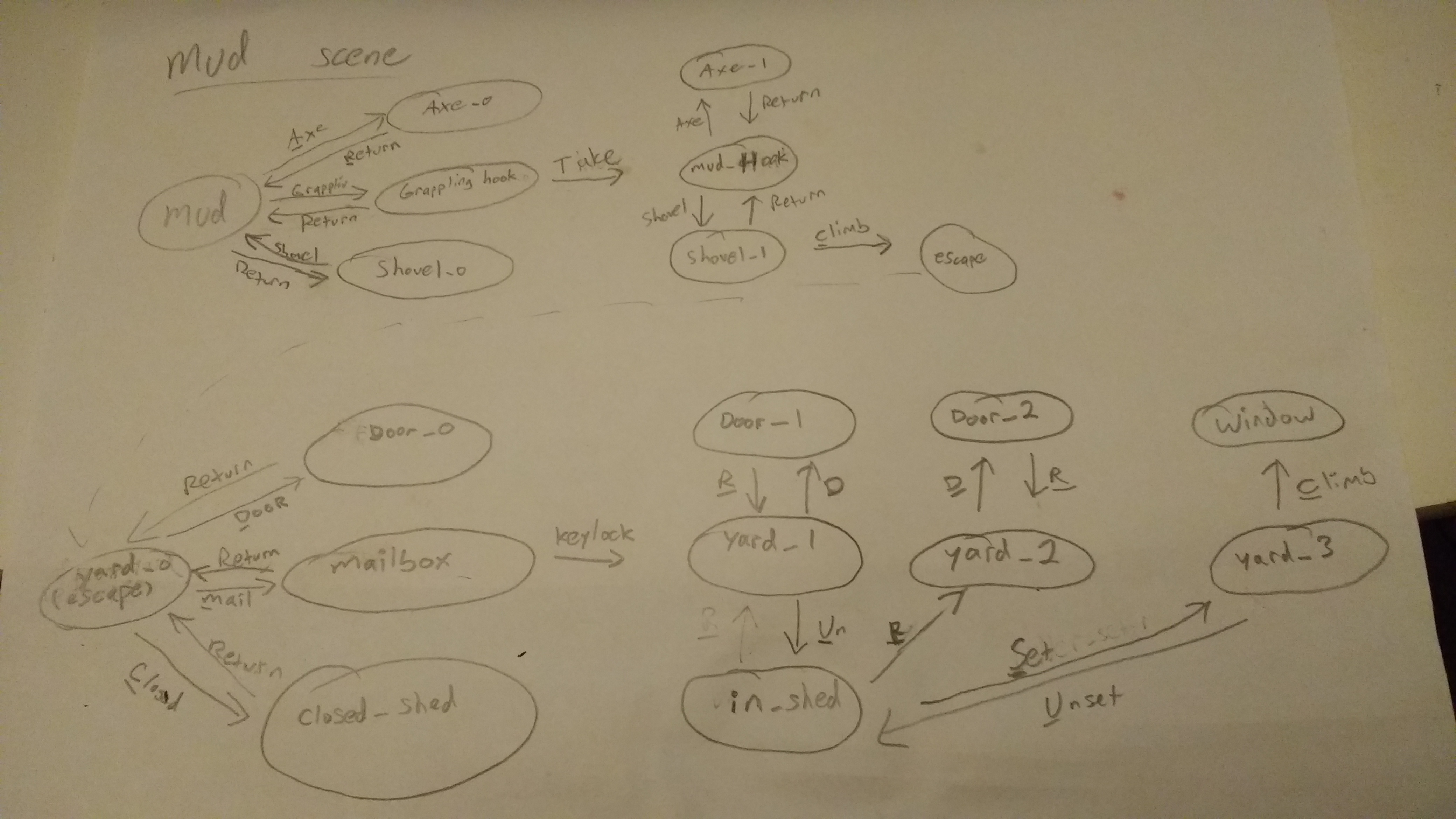 Speaking about work, there was another way the project here crossed with my job. I never learned/used C# until this year - past few months actually - because I was mostly using Java and web developer langauages. So some concepts and syntax inherent to C# are new to me. One day at work, I run across a keyword called #region in one of the files. I didn't really bother with it, but it would come up every now and again. Fast forward a few nights later to this game project and what do I see? 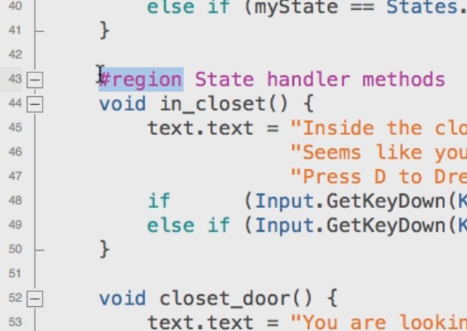 Yep. That same keyword. This #region keyword allows the IDE editor to collapse grouped together code that perform similar functions. This makes your code better organized and easier to read. Both Visual Studio and MonoDevelop, the Unity IDE editor, support this. Funny how life works like that, huh? 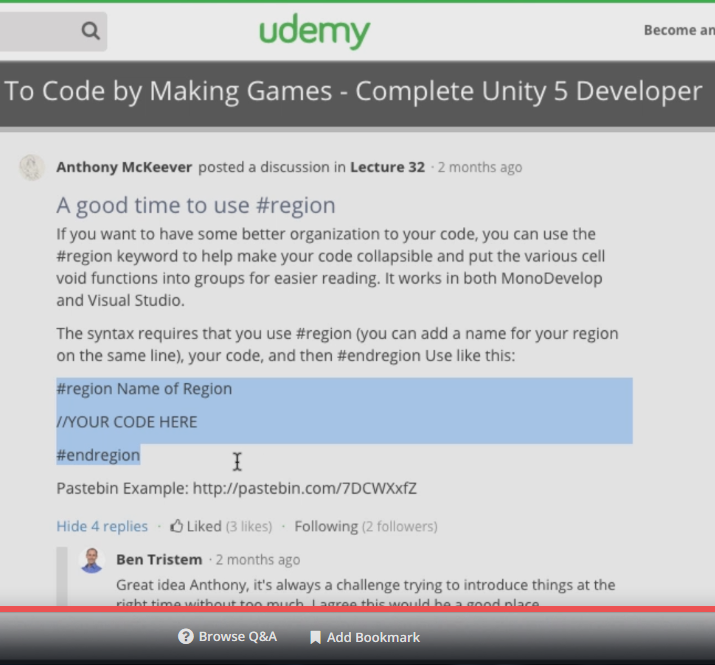 Back to my project, the idea is simple: you start out in one state, and depending on your choice, you can follow paths which can direct you to a dead end or progress forward. Some things might need to be triggered by doing certain things. In my case, you started out with your foot stuck in the mud with the ultimate goal of getting out and climbing into your window because your shoes are muddy and you don't want to get nutuered for leaving footprints in the house like your dog did. As I showed in my diagram, there's a grappling hook, a shed, and a ladder which lead you to winning the game. I like doing silly things in when I game, so expect most of my games to have some sort of silliness to it.

I'm hoping to up the ante and complete two projects a month to get done. I have about 8 projects left for this course, ranging from 10 hours a project to some being only two hours. I say this course because, not kidding, they have another course focusing solely on 3D games - which I just bought while writing this (ha!). This originally was a mix of 2D and 3D games, but they separated it now so it's focused mostly on 2D now. The nice thing is that the course I'm doing now is being updated, but the old content is still there so I won't be gated off from the 3D content. I might switch gears and go do 3D projects after finishing this current project I'm on.

In the meantime, click this sentence to go to the text adventure game and tell me how much it sucks.. Actually, you know what? I think I will switch over to the 3D course, simply because it aligns with the type of games I want to make. Then you can tell me how much my 3D games suck. Can't wait!