It's time for me to show my age.  I'm going to use the phrase I always dreaded using.  When I was young, E3 was the big ticket in town.  You never really knew what big announcements were going to come.  Sure there were exceptions to this, but generally speaking, the excitement was real.  I loved those days.  The anticipation and shock I got from some of the game announcements was just plain awesome.

Nowadays, there are just some many leaky pipes before E3.  Someone should really call a plumber and get this fixed.  Plus who doesn't like some plumber's crack?  Any more, we know probably 80-90 percent of what is going to be shown at E3 before E3 even gets here (Thanks Walmart!).  It's just not nearly as fun or exciting.  It's like ruining Christmas morning.

I'd love to go back to the time when E3 was the main thing.  The thing everyone couldn't wait for.  Can't we please fix these leaks and leave some of the surprised.  It would be nice to feel like a kid again before E3.  I know you can't fix all the leaks and let's be honest, we know what we are getting from Ubisoft and EA every year, it's just a matter of the cringe level.  But can we please leave some of the surprise?  Maybe I'm just getting old, but I'd love it to go back to the way it was.  I'd also love it if those kids would get off my lawn and stop listening to their devil music!

* - I really enjoyed this blog. I like a blog that makes me think and gives me ideas and possibilities I never really thought about. Adzuken gives a possible idea about the meaning behind Ocarina of Time. I don't want to give anything away, but you should take a look. It's good stuff!

S - It's time again for Dwavenhobble to speak from his SOPA box. This time he takes a look at Battlefield V and EA 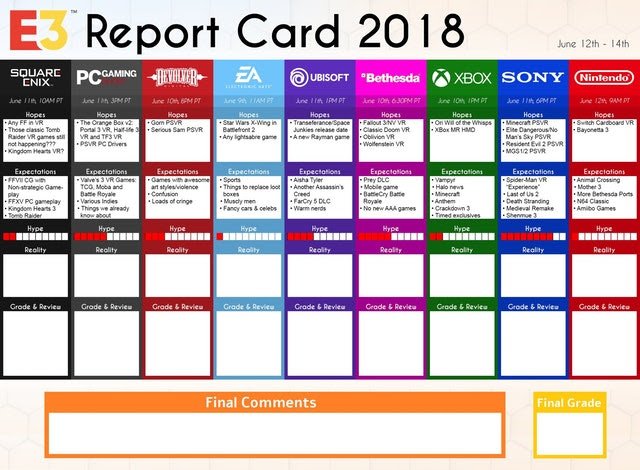 S - Ocified-Xboxer hasn't been around too much. Life gets busy, it happens. Xboxer gives a look at what they've been doing since they've been gone. Stick around Xboxer, we like you here

N - Monkey830 takes us through some of the leaks that have been coming out prior to E3. Remember when E3 was the big thing?

T - Sapato64 has finally been grabbed, right in his man region. Sapato64 takes a look at Guild Wars 2 and why it finally has grabbed his attention

T - I've never played Far Cry 2 and honestly haven't heard much about it. Pomfrod has though and he wasn't a huge fan. This blog takes a look at why they don't think it should be viewed as a cult classic

T - Monkey830 asks a question I'm sure lots of us have been thinking. Have we reached peak saturation with the battle Royale game mode. Video games are definitely trend followers it seems and I think we've reached oversaturation at this poiny

R - Homophobia is bad. Any kind of discrimination is bad and if video games and their developers are homophobic they should be called out on it. I personally am not sure if Blizzard is homophobic, I haven't personally seen alot of evidence, but I don't play Blizzard games. The Baked Potato however does and lays out why they think so and why they shouldn't get a pass.