Thank You Bless Online, I met your cousin Guild Wars 2 and now I'm dating her!

Guild Wars 2 was a game I tried to like, quite a few times but it just didn’t grab me. Up until now that is.

I’ve been on an MMO phase recently, getting back to WoW even leveling a new pally to 64, but alas I got bored of it. Then I tried Rift, which I liked but the community wasn’t there. Along came Bless Online and it was supposed to be the next big thing. Supposed to be, being the keywords here. I tried it and to be honest I liked what I played but in between constant bugs and paying 40 dollars for something I could not play (9 hours game time, with about 2 being actual playing) I decided to get a refund and look elsewhere. Then somehow Guild Wars 2 comes along onto my plate and I gave it a shot. GW2 never gelled with me, I don’t know what it was, but it just didn’t seem like my kind of game. I decided to try it out anyways.

That brings me to right now, and I’m enjoying the hell out of it, I’ve kind of accepted the fact that most MMO’s now are full of single players just going about their business. This however does not remain true with GW2 for the most part, people are just going about their business doing their own quests, BUT now other people are doing it with them, and the need to ask to join up isn’t there. Again you still are helping each other though. Interesting enough the way GW2’s quests work aren’t quite like any other MMO I’ve played. Quests are usually kill X amount of this, or grab X, escort that. That remains the same way here, BUT those 3 objectives can be mashed into a single one. Quests here are represented by hearts on the map, telling you where to go. This is unique because people group up and are doing the same thing you are, and you can gain credit by helping others around you, making grouping up kind of a must, kind of forcing you to play with others. 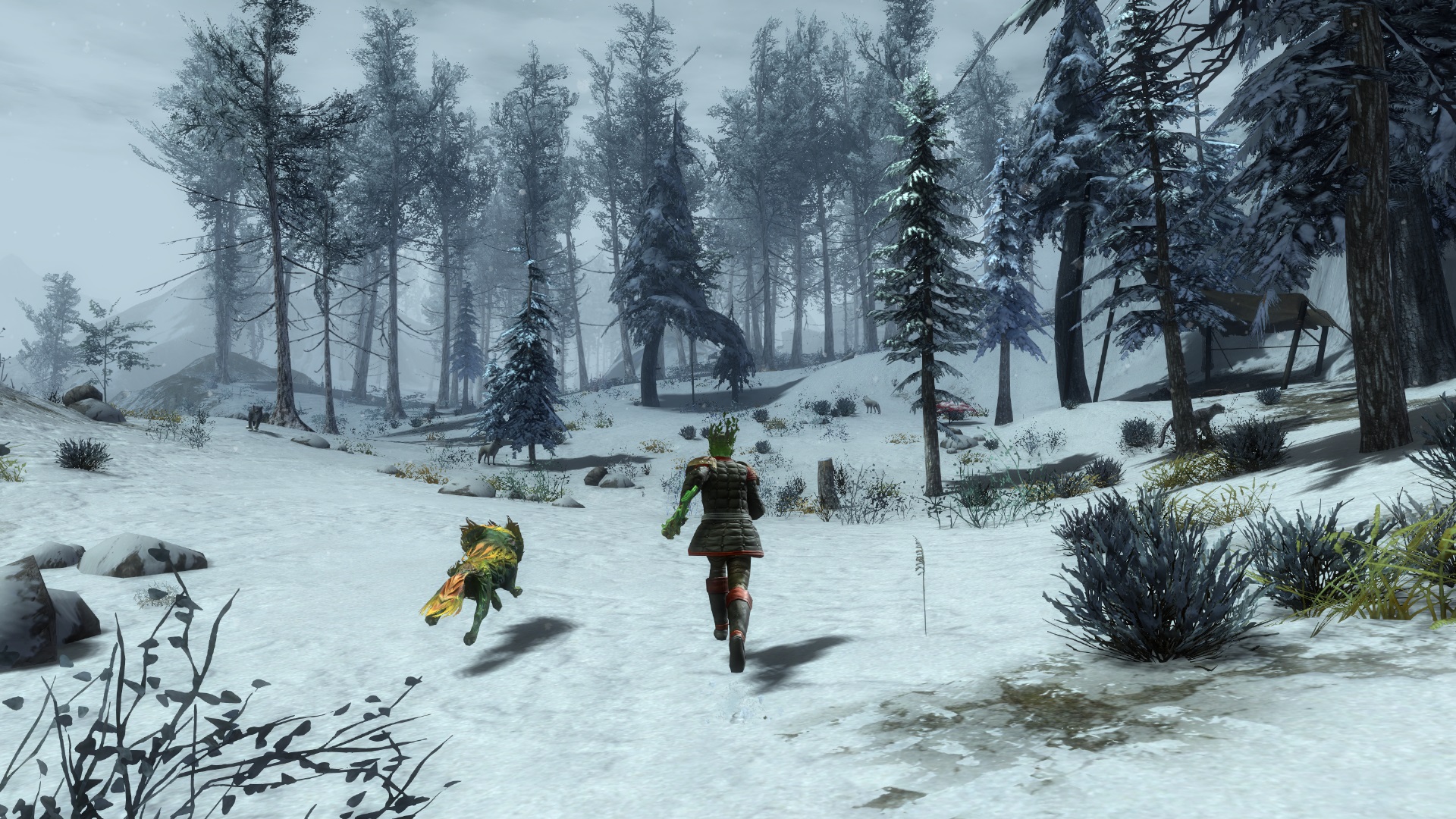 You can join more than one guild at a time too, hopping/representing one to another to join in on the discussions. I’ve met some good people so far this way and by the way of main chat. There are also jumping puzzles here too, tricky platforming to get a good piece of loot. I met someone that stood by me as I failed a jump over and over again but with immense satisfaction as I finally completed it and was awarded with a nice chest of items. I’m in over my head when it comes to customizing my character, I blame WoW for that. There’s a bevy of different skills to choose from, and this is a GREAT thing to have. I haven’t played a game with this much customization since Warcraft initial launched.

The maps in this game are pretty big and varied with TONS of stuff to do in them. For example, maps can have 12 Hearts (quests) 6 Vistas, the camera spins around and shows you an interesting sight. 8 mini boxs (point of interest) 12 checkpoints that you can jump between all of them for a low cost. Finally we have 5 or 6 Hero Point nodes, which usually has you fighting something/one to earn your point. The developers really took the time to make this game shine. Not to forget Jumping Puzzles, they usually go hand in hand with Vistas, an MMO with carefully, sometimes aggravating, timed jumps to get you the reward. Cool Stuff! 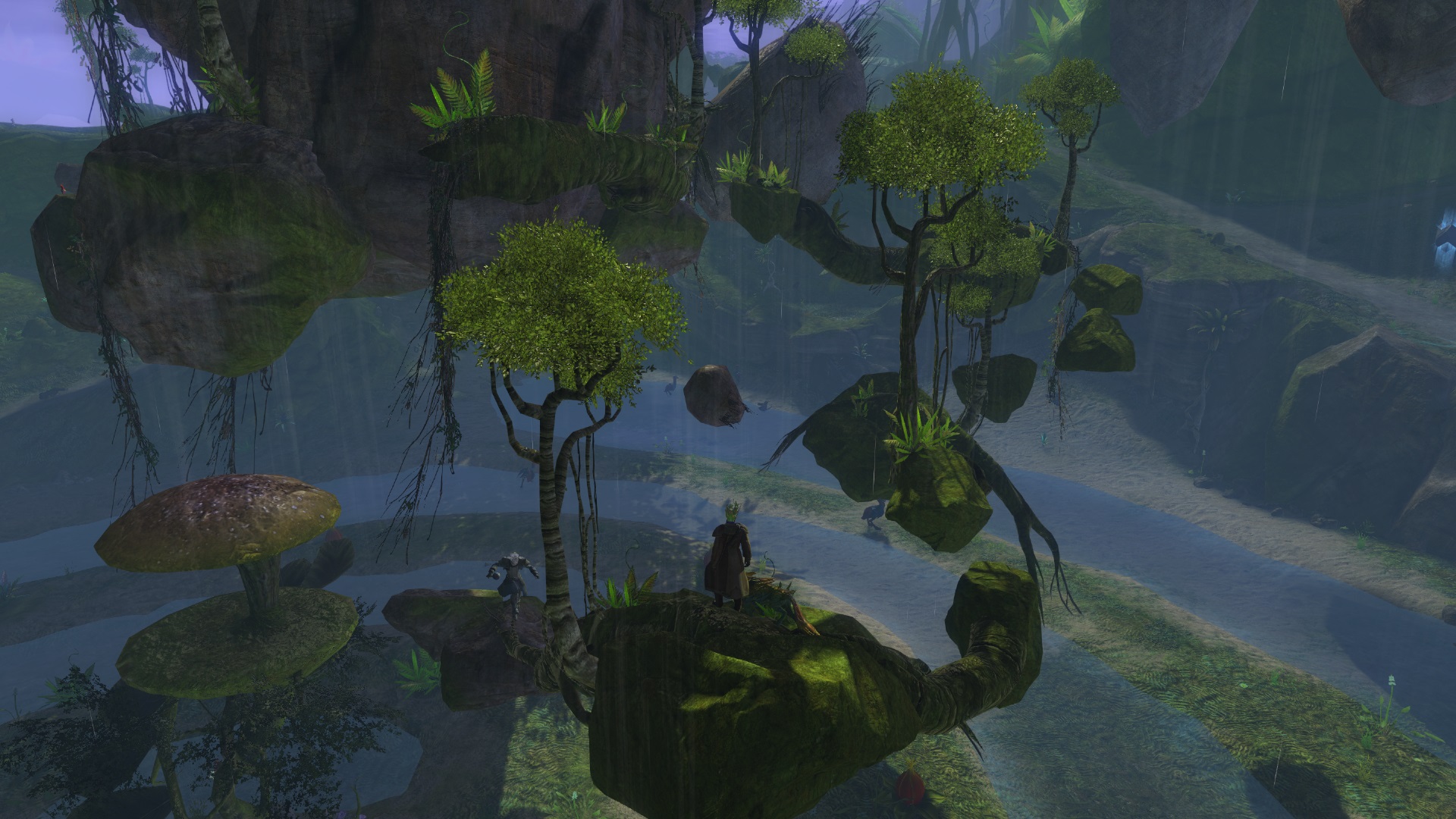 I go through spurts of gaming look for the next one that will put me in the zone and overlook anything else that happens to release for months. With Guild Wars 2 I think I’ve finally found that game. I urge everyone to try it. Thank You Bless, you turned me to a forgotten gem that I still have the Heroic version to the left of me in my stand. Here’s hoping I continue to play it.