On filler or repetition

Or, one-and-done versus permadeath with a positive bias for the latter.

Kurt Vonnegut (1922-2007) gave an interesting presentation on the shape of stories. I'll borrow his toolbox a bit.

Unlike him, I'll focus on character power progression instead, because it's fun to see arbitrary numbers grow higher. Here's what a regular single-player game that is all killer and no filler looks like.

First throw in the disguised tutorial, then build an arc of something that uses these skills, typically with numbers increasing without much changing, and have the arc finish with the game. Coincidentally, that's what a game with a lot of filler looks like as well. The difference comes in when we change the end to the time spent playing up until that point.

You might be pissed off that a game you bought is over in only four hours. Or not, if it wasn't 60€ or more.

Now, the filler is one way to stretch the game. But here's another and let's assume it depicts a game played about as long as it takes to finish the generic game described above: 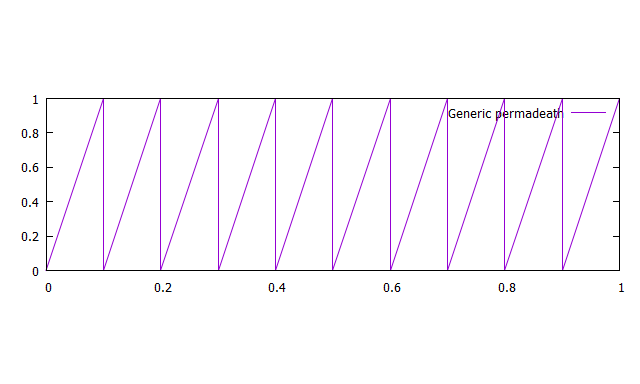 Successive playthroughs one after another in a roguelike or in any game with permadeath... assuming they're all successful, which they probably won't be. For a roguelite, the simplified ideal plot would be something like this: 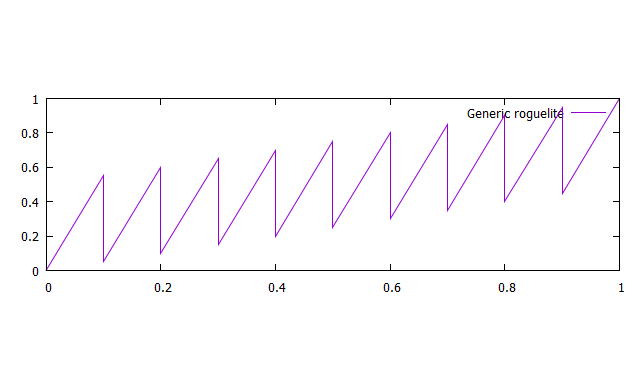 Here, the player's base power and/or the level they can reach keeps increasing each successive playthrough. The question is, should the padding be all inserted within the first playthrough, or in those the repeat playthroughs with more or less differences to the previous run.

The present-day view of a game having to be of at least a given length so that it is worth spending money on doesn't jive with titles that emulate the old arcade style: more or less full throttle from the start until game over with barely recognizing the concept of pacing.

I would even say that one essential component in keeping games with procedurally generated content interesting is to limit the length of these sections, either by making them clearly distinct (independent maps in tactical strategy games) or keeping the game itself short. (Of course, Minecraft and Dwarf Fortress need to be pointed out as obvious counterexamples.) In other words, keep it short, stupid.

Spelunky (Mossmouth, 2008/2012) is an example of a game where one playthrough lasts only a relatively short time. The median Any% speedrun on HowLongToBeat is 1h 14min. Median time to complete the main story is 18h. While the shortcuts the player can build in the game help in avoiding repeating the first "worlds", it also serves to keep the game shorter.

Star Ghost (Squarehead Studios, 2016) on Wii U is an example of how to fail here, as one game could last for multiple hours (with no save feature that I knew of). By contrast, XType+ (PhobosLab, 2014) was based on defeating random-generated enemies, but most importantly the game kept getting harder. Caveat: I remember reading an interview by the author where he said that he didn't expect people to get as high scores as they did, but I cannot find the actual article to link as a source. (Yet to be honest, XType+ has only six numbers reserved for the scores in the high-score list, and that limit has already been crossed.)

Has-Been Heroes (Frozenbyte/Gametrust, 2017) is a failure in this regard. It's a game relying on procedural generation: randomized enemy waves, randomized maps, randomized powerups to find and purchase. With that game, the ideal curve goes as follows:

Each time the player manages a full run, a new world is added to the end of the next runs. The game also gets more difficult, as more enemies are unlocked, but so are more powerups. Plus, the "real" ending is the eighth or so successful run.

The end result is that one late-game run can last far too long, dragging on just like long RPGs. And worse, the longer the runs get, the more punishing the defeats are.

You've probably noticed that I've focused on the repeated restarts in this blog. That's for a reason.

Tasks that haven't been done are the most laborious ones. That applies also to games in the backlog: a game that hasn't been finished yet weighs heavily in the back of the mind.

It's not really a secret that I loathe The Legend of Zelda: Breath of the Wild (Nintendo, 2017). The Korok seeds feel like the worst possible procedurally generated filler content, and the shrines aren't far behind with their cookie-cutter visual elements and the overabundance of "defeat this one enemy" shrines.

The problem in finishing it isn't that the game is hard but because it is tedious. Finishing the game is a crap job, but it has to be done, because it's not a question of being unable to do it, but not accepting being lazy about it. And there's the sunk cost fallacy to play with the mind: "I've wasted all this time/money with the game, I might just as well see it through."

I know I'm never finishing Super Metroid (Nintendo, 1994). I played it for a few hours on Wii U, got bored, then forgot everything about the map and how to play it, plus I really don't feel like going through the exact same stuff again.

And here's the one thing I love about permadeath: it makes dropping a game for a while and restarting it a year later so very easy. The results just may vary, as I noticed with Devil Daggers (Sorath, 2016) after a year-long pause.

Just about everything I've written about roguelikes fits in with any game with permadeath. So... where's the difference? Games like Darius (Taito, 1987) and Outrun (1986) have presumably handcrafted levels but with branching paths, which means there's more to see than seen on the first run.

Those stave off the exact repetition at start, but at some point, it becomes a question of having to remember where the enemies fly onto the screen, where to slow down before the dangerous curve is communicated to the player... althought that's also partly fused into how they were designed. Ideally, that's not so much the case with procedurally generated content, as being able to take in the situation and do the best one can with the cards dealt is. Do I have enough health potions to go deeper in the dungeon or should I turn back before the random encounters wipe out the team? (After all, those are procedurally generated content as well even if the dungeon layout isn't.)

(And in the one week that I delayed publishing this cblog, I came across GRIDD that showed how badly a game can fail in creating good procedurally generated content yet its developers managed to make a reasonably good but short handcrafted section. Takes the wind out of my sails, that does.)

Going back to Vonnegut's talk... one day, I'd like to see computers being able to conjure up intriguing new stories by procedural generation. I doubt the results I'll see in the next ten years will be particularly good, though. But with companies/services like StoryFit and Synapsify that are already used to analyse stories, the opposite direction doesn't sound completely unplausible.

But I'm pretty sure I'd still be more interested in those algorithms than in any game ever, with or without procedurally generated content. That stuff's just way more fascinating.